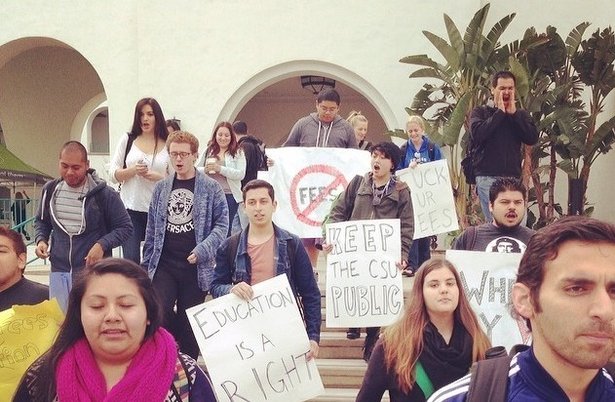 Last spring, The Nation launched its biweekly student movement dispatch. As part of the StudentNation blog, each dispatch hosts first-person updates on youth organizing—from established student unions, to emerging national networks, to ad hoc campaigns that don’t yet have a name. For recent dispatches, check out January 27, February 10 and February 26. For an archive of earlier editions, see the New Year’s dispatch.

On March 5, as UCLA students died-in against deportations, #not1more continued to grow and students at the largely working class Community College of San Francisco prepared further action against a potential shutdown, students at the University of California–Santa Cruz took up Berkeley’s call for escalating action against UC President and former Secretary of Homeland Security Janet Napolitano. Fresh off major wins for strike-ready UC service workers and Santa Cruz teaching assistants, students and workers rallied to make clear that these developments are part of a larger struggle to reclaim the university. After marching to McHenry Library, students entered the Hahn Student Services building and subsequently occupied it for eighteen hours. There, we called for Napolitano’s resignation and for workers’ ongoing demands—safer staffing, smaller classes and work for undocumented graduate students—to be met. Through daybreak on March 6, Hahn, normally a space of loans, fees and student-judicial affairs, became a site for students to strategize resistance to the dual challenges of racism and privatization.

2. As Cal State Tuition Skyrockets, Students Mass Across the State

California State University’s new tactic of adding “student success” fees on a campus-by-campus basis, a fee hike by any other name, is drawing criticism from students, faculty and editorial boards on campus and off. For a week, students at San Diego State University have been trying to meet with their president—who gained statewide notoriety in 2011 when he was awarded a 30 percent raise at the same time that a fee hike was implemented—after a rubber-stamp committee recommended fees be raised in fall 2014. Students have staged multiple sit-ins, marches and rallies on campus against the hike, decrying undemocratic decision-making and demanding a meeting with the president, who has yet to even respond to letters or e-mail via intermediaries. Leading up to the CSU Board of Trustees meeting on March 26, students at SDSU, Fullerton and Dominguez Hills, all affected by the fees, will continue building pressure.

In February, LA’s Roosevelt High School Academy of Environmental & Social Policy received a letter from Superintendent John Deasy directing this small and notably successful school to join a larger campus in a new neighborhood or close down. Despite four hours of protest by parents and students outside LAUSD headquarters on February 25, nine speakers who addressed the school board this week and questionable claims of fiscal unsustainability, the community has not been able to convince the district to reconsider this decision—made without any input from students, parents or staff. We are fighting for our school because it is safe, a place where we are involved and, most importantly, to assert the importance of student voice—which the district is quick to ignore.

On February 24, the California Secretary of State confirmed that right-wing efforts to repeal the School Success and Opportunity Act, AB 1266, failed to qualify for the ballot. The law provides important guidance for schools to ensure that all students, including transgender students, have equal access to facilities and services. Youth, LGBT, racial justice and statewide teacher and parent organizations formed the Support All Students coalition after the law’s passage last summer, working together to educate Californians on the experiences transgender youth face in schools and how districts can support all students. The law went into effect January 1; now, youth activists are focused on local implementation. Students can start an implementation campaign in their district or support other Gay-Straight Alliance activists’ campaigns through the GSA Network Unite! campaign platform, which is also available to youth outside California.

On February 19, thirty-one current and former UC-Berkeley students filed two federal complaints, under Title IX and the Clery Act, citing gross administrative inaction and conduct in preventing rape, supporting survivors and punishing those who commit such acts. This follows nine months after an initial federal complaint, representing nine students, was filed. The public survivors are committed to holding the administration responsible for allowing an environment that is unsafe for survivors and fails to sanction appropriately those who commit acts of sexual violence. The movement to end sexual violence on college campuses is a nationwide issue, with several other universities, including the University of North Carolina, USC and Swarthmore, also facing potential investigations, and Northwestern students sitting-in this week.

On March 6, the International Relations and Pacific Studies department at the University of California–San Diego held a conference titled “Mexico Moving Forward”—a convening of economists, industrial capitalists and artists, opening with a speech by Janet Napolitano, celebrating the “benefits” of the North American Free Trade Agreement. In fact, NAFTA has decimated the lives of millions in Mexico—while also sparking the rise of the Ejército Zapatista de Liberación Nacional. In protest of the UC system for perpetuating neoliberal policies, and in solidarity with those who have resisted or lost their lives under NAFTA, students and community groups staged a silent march with ski masks and red and black bandanas to the building where the conference was held. The march was modeled after an action in December 2012, where Zapatistas marched in perfect silence to the center of San Cristóbal de las Casas to show that they are still present and resisting.

On March 4, the first day of Florida’s 2014 legislative session, the Dream Defenders, alongside community allies, hosted our own State of the State address, #VisitFL, to discuss the disproportionate incarceration of youth of color; privatization of the state’s juvenile prison system; and the impact of laws that encourage violence against black and brown youth like Stand Your Ground. After the address, we marched to the fourth floor of the Florida capitol outside the doors where Governor Rick Scott was supposed to deliver his own annual address. The Florida Department of Law Enforcement demanded that we leave, but we refused. As our chants were heard in both the House and Senate chambers, a recess was called, and, for the first time in history, the governor took a secret entrance into the room. Meanwhile, some legislators offered their support. On that same morning, the Florida Senate Judiciary Committee quietly and swiftly passed CS/HB89, a so-called “warning shot” bill that would expand the Stand Your Ground defense by allowing individuals to fire warning shots when they perceive a threat, without the obligation to retreat. HB89 passed overwhelmingly less than one week after a jury in Jacksonville chose not to convict Michael Dunn for the murder of unarmed 17-year-old Jordan Davis.

Over the weekend of February 21 to 23, Generation Progress brought together young people from across the country for a first-of-its-kind #Fight4AFuture National Gun Violence Prevention Summit. Summit attendees had a range of backgrounds, from a former gang member, to a 16-year-old man who has had twenty-eight friends and family die as a result of gun violence, to the brother of a victim from Sandy Hook Elementary, to the editor-in-chief of Global Grind and representatives from the White House. Participants included Million Hoodies Movement for Justice, Jr. Newtown Action Alliance and the Georgia Gun Sense Coalition. Attendees engaged in small group discussions to develop local plans of action—and hatched plans as well for a national activist network to be announced soon.

On March 2, 398 students, among a group of more than 1,000 protesters, were arrested in front of the White House following a two-mile march from Georgetown University. Amid chants of “We love you” and “Arrest my friends,” the students, 250 of whom were zip-tied to the White House fence, awaited arrest under freezing rain and wind—a process that lasted more than six hours. Our reason for this act of civil disobedience was simple: to make it clear to President Obama that we did not vote him into office to have environmental disaster exacerbated by the Keystone XL Pipeline, and to stress the environmental, climatic, economic, political and social consequences that would arise if the pipeline were to be approved. As we await President Obama’s decision over the coming months, activists across the country will be delivering comment cards and petitions to Washington, pressuring elected officials and ramping up direct action.

10. Who Speaks for Mass Incarceration?

This winter in West Philadelphia, FAAN Mail, a collective of young women of color, organized a screening and discussion of Orange Is the New Black, the Netflix series set in a women’s prison. Community members concerned about—and personally affected by—mass incarceration shared dialogue about the portrayal and realities of prison. Activists talked about local organizing efforts after exploring the following questions: What value, if any, does OITNB offer in the movement to end mass incarceration? What aspects of the show are realistic or fantasy? What do OITNB audiences need to know about mass incarceration?