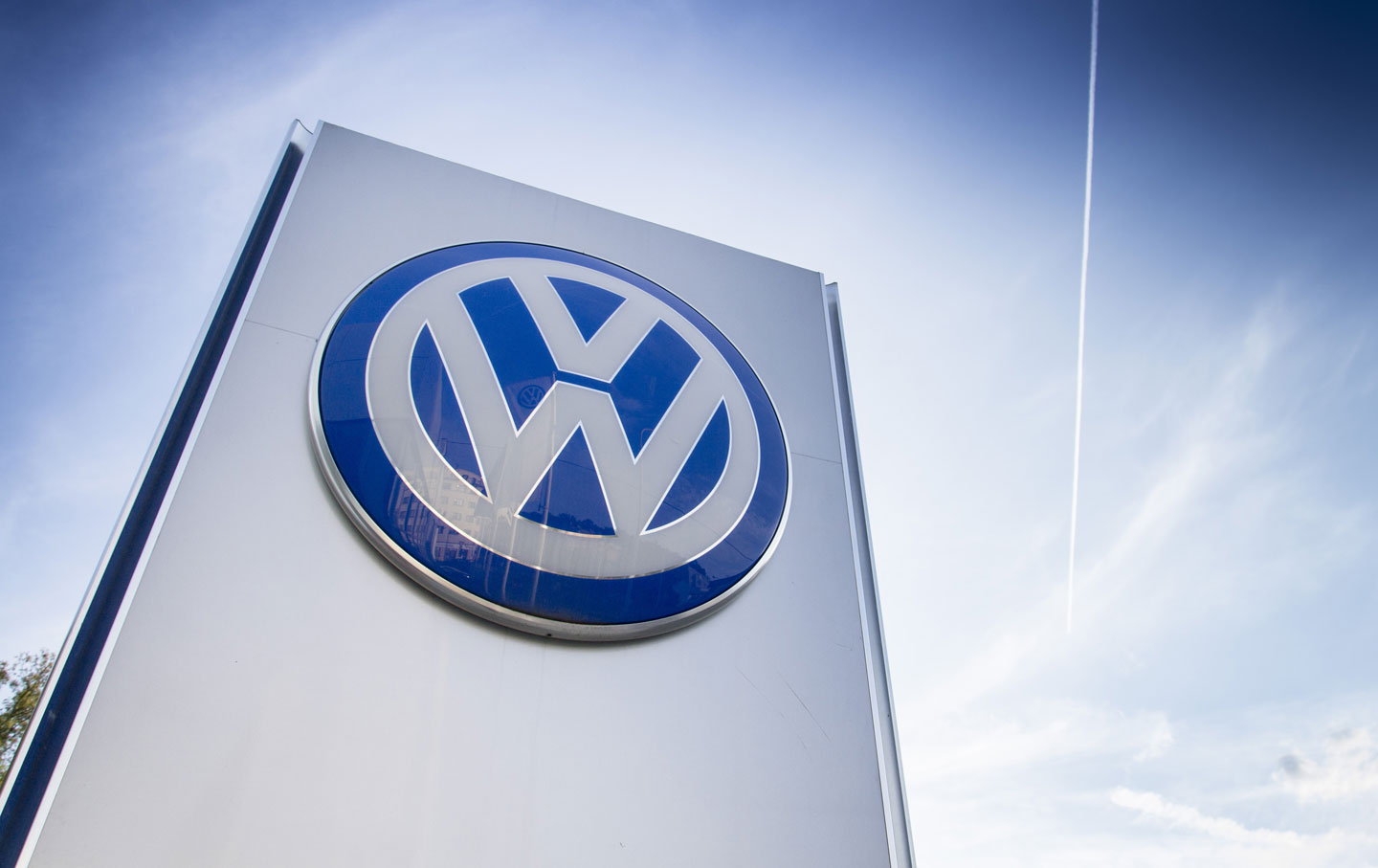 When Volkswagen, maker of the humble Beetle, first found a home deep within the American psyche in the decades after World War II, it presented itself as an automotive brand apart. In a sea of chromium excess and Detroit tail-fin profligacy, the German carmaker stood for values like conservation, thrift, and modesty. Born of the austerity of pre- and postwar Europe, the company’s name meant simply “People’s Car.” But in that peculiarly American place where progressivism and puritanism meet out back in the parking lot at the mall, the Beetle’s perceived honesty and friendly minimalism placed it at the center of a powerful and enduring consumer movement, one that has bordered on religiosity. For a sense emerged of Volkswagen the company as fun, fair, and caring. Another century’s Apple, it captured the hearts and prized open the wallets of many a well-meaning, planetarily aware citizen, and did so through seven decades, into our own times. Not unrelatedly, VW has for the first time sold more cars than any other company in the world in 2015, passing General Motors and Toyota.

But then things changed—abruptly. On September 20, the fabled firm from Lower Saxony was forced to admit that it had misled its customers with its narrative of “clean” diesel cars. Indeed, Volkswagen had brazenly broken the law when it cooked up a super-sneaky software fix for its smaller cars to make it appear to Environmental Protection Agency emissions testers that the diesel-powered models sold by VW in the United States from 2009 to 2015—some 482,000 cars—were considerably less polluting than they actually were. A “defeat device” placed into the software of VW and Audi models with four-cylinder diesels—a hack only recently uncovered by a university lab in West Virginia while conducting independent tests—temporarily lowered the emission of regulated oxides of nitrogen (NOx) to acceptable limits. But the tweak had a sinister nature: The reduction happened only during that exceedingly rare moment—once in a car’s lifetime—when it might randomly undergo testing. For the rest of their service lives, however, these diesel cars might spew up to 40 times the legal limit of NOx, a compound implicated in the creation of ozone and smog and linked to asthma and emphysema.

One day after the company’s announcement that it had perpetrated this elaborate fraud, with millions shocked and appalled, Volkswagen revealed new depths to its perfidy. Catching the bad publicity wave head-on, VW announced that its official count of illegally programmed, overpolluting cars had actually increased 2,300 percent—from 482,000 to 11 million units, not confined to the United States but spread around the world. Conceding guilt, the carmaker announced that it had already earmarked 6.5 billion euros to fund future payouts related to the debacle. Then, cutting to the chase, VW offered that among its new legal representatives henceforth would be the American law firm Kirkland & Ellis, which recently worked as the defense team for BP following the Deepwater Horizon blowout.

The Guardian has estimated that VW’s secret excess NOx emissions since 2008 could be as high as 1 million tons per year. Over all those years—a period when VW diesels were being aggressively marketed as the perfect vehicle for car owners looking to conserve oil and minimize their carbon footprint without sacrificing performance—these very same engines emitted as much NOx as all of Britain’s other auto, power, industrial, and agricultural sources combined. Few owners who’d purchased their Volkswagens for green-minded reasons appreciated the irony; they’re hopping mad, and so is the US government. But while Volkswagen’s shame is great—as is its liability—history suggests that the company’s demise is not imminent.

For breaking federal emissions law, Volkswagen is potentially liable for as much as $37,500 per each occurrence, or a grand total of $18 billion in possible fines in the United States alone. It’s an astonishing sum—and fair punishment, one might argue, for such a willful and egregious offense. And with private lawsuits and other fines, along with recovery actions brought by foreign governments, it should be just the start of the company’s punishment.

But in the current enforcement climate, fines of such bankrupting magnitude will never come to pass. There is no such thing as capital punishment for a capitalist enterprise gone fatally wrong. Both of the world’s other largest automakers have been exposed in the last two years for deliberately (and lethally) lying to government regulators and the public about their products—with little in the way of lasting consequences. No one at General Motors went to prison for actually killing dozens (and possibly over 300) innocent people with faulty ignition switches and then covering it up; the fine was a measly $900 million. A year earlier, after serially lying to regulators and failing to report a pattern of so-called runaway acceleration events, Toyota paid an only slightly less affordable fine of $1.2 billion—with no hard time for anyone in either case. To be sure, the firms will also pay out huge recall expenses and additional billions in settlement money to private claimants. That may sound like a lot, but in the trillion-dollar auto industry, it isn’t.

Still, it’s hard to know where to start with Volkswagen. Typical behavior has automakers engaged in the disappointing but perfectly legal task of helping regulators write the rules by which they will be regulated. Often, this leads to the adoption of soft standards, ones that the companies know they will easily meet. The process is readily perverted, but at the end of the day at least there’s some regulation, and observing it constitutes playing by the rules. Volkswagen not only failed to play by the rules; it arrived at the starting block with an intention to cheat, deliberately scheming to sidestep a clean-air regulation that was already lax in order to trim costs. (The allegations against the company, in a nutshell: Volkswagen has installed an urea-injection system to make its six-cylinder diesels meet emissions standards—and while the same system could have been installed in its four-cylinder diesels to achieve compliance, the company decided instead to skip the fix for its smaller, cheaper cars and then cover up evidence of the deficiency with the help of code writers gone wild.) The method, the means, and the motive are all clear. So what now?

Volkswagen has apologized. The corporation’s share price has wilted. The national mood in Germany is one of deep mortification, as consumers from Hong Kong to Hastings-on-Hudson vent angrily, dragging the brand down. Still, it seems safe to venture that Volkswagen will eventually recover. Even more than American lawmakers, who saved GM and Chrysler with little hesitation when the bottom fell out, German politicians would never dream of letting their nation’s largest automaker and its biggest employer go under.

Heads needed to roll nonetheless. CEO Martin Winterkorn resigned on September 23, and several other executives were suspended. Though he has claimed utter surprise, Winterkorn’s eight years at the helm completely dovetail with the period in question, likely making him one of many dozens or hundreds who must have been in on the hatching and execution of VW’s diesel caper. At the very least, he is certain to never work in the automobile industry again, which is one of the things that must make him grateful for the $66.9 million farewell package specified in his contract. Although his replacement, Matthias Müller, has already sought to push the blame downward, calling out the “unlawful behavior of engineers and technicians involved in engine development,” Volkswagen has initiated its own formal investigation, which will determine in part how much Winterkorn walks away with. But of greater importance may be the investigation by German prosecutors.

For now, criminal prosecutions, lawsuits, class actions, dealer collapses, customer rebates, marketing campaigns, message advertising, and attempts to deal with the loss to reputation and company valuation, as well as losses from diminished trade-ins and lease residuals—all are being expensively prepared and set in motion, in each of the umpteen jurisdictions where Volkswagen has soiled itself. It’s a long road back, but one day it will all be a memory. Along the way, however, we are sure to be reminded of a few facts: For example, this isn’t the first time that Volkswagen has fudged regulatory testing—it was fined as far back as 1973 for doing so, as was General Motors in the 1990s. Inevitably, we’ll learn that Volkswagen is not alone, and that its crimes are the tip of the iceberg. With the computer controls found in today’s cars, any major car manufacturer or its suppliers might fudge a car’s emissions profile, especially if no one is looking. The problem is self-certification: It doesn’t work.

Like clean coal, clean diesel isn’t clean enough and never will be. Until we’re not burning fossil fuels at all, cars are too polluting. In the meantime, all long-running exemptions from emissions requirements for diesel and other fuel oils being used in all kinds of heavy equipment, off-road machinery, and even steamships should be called out as the heinous errors in judgment they are and immediately corrected.

We really ought to start holding corporations and their officers liable for crimes. Why is prison’s deterrent effect so thoroughly overlooked for the executive class? When it comes to corporations, society has a surprising amount of mercy. Mistakes, misdeeds, and even acts of pure evil are forgiven and forgotten. Consider the experience of Volkswagen itself. It has already managed to live down its role as an engine of the Third Reich, using slave labor from concentration camps during World War II, only to make its name on the Beetle, a design stolen from Josef Ganz, a Jewish engineer who was subsequently run out of Germany by the Nazis, then prevented from sharing in the model’s success and written out of the official histories. More recently, the 1960s Beetle shared many of the worst safety properties of the Corvair decried by Ralph Nader. It had already been fined for trying to hoodwink the EPA.

Yet, somehow, we remember Volkswagen fondly. For large swaths of America’s thinking classes, the German automaker recently became Shoeless Joe Jackson of the 1919 Chicago Black Sox, minus the mitigating circumstances. Say it ain’t so, Volkswagen, they cried. But, folks, it can’t. Because it is so and it always was.