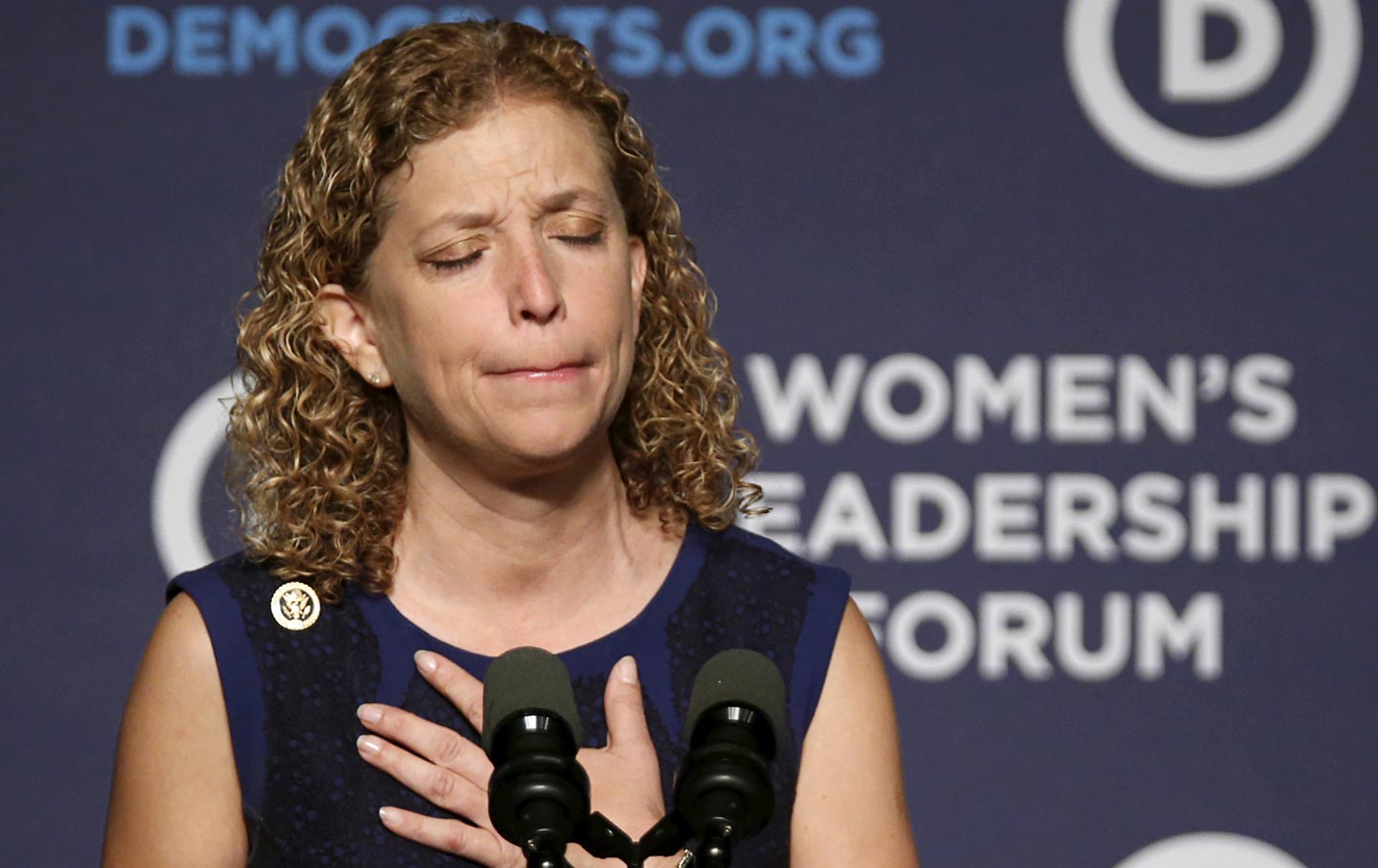 The release of nearly 20,000 internal e-mails from high-ranking Democratic National Committee (DNC) officials confirmed what many Sanders supporters long believed: Over the course of the primary, members of the DNC became hostile toward the Vermont senator’s candidacy. In one late April e-mail, Debbie Wasserman Schultz, the DNC chair who announced her resignation on Sunday, called Sanders’ campaign manager Jeff Weaver an “ass” and a “liar” and discussed strategies for shaping the media’s coverage of the campaign. The e-mails show that by May, DNC staffers wanted Sanders out of the race.

But the bigger question—did the DNC meddle with the primary?—remains unanswered. So far, nobody’s unearthed a “smoking gun” proving that the DNC actively intervened in the process.

There’s a fundamental problem for those spinning the leak as proof that the primaries were rigged: The e-mails that have caused so much outrage were all written after late April, by which time an enormous amount of bad blood had developed between the DNC and the Sanders campaign—mutual antipathy for which both sides bear some blame.

Lots of people have been sifting through the cache for the better part of a week, and the DNC’s internal correspondence prior to late April hasn’t produced any headlines. That suggests the committee members’ disdain for the Sanders camp didn’t reflect their baseline attitude toward a long-shot, anti-establishment challenger from the left. Rather, it appears to have developed over the course of the long race.

A search of the WikiLeaks database returns only a handful of e-mails, all benign, mentioning Bernie Sanders before the relationship between the two organizations began to sour in mid-January. The Sanders campaign had been suspicious of the DNC’s neutrality from the start; among Sanders supporters, it was widely believed that the committee had established a debate schedule that would limit Clinton’s exposure and make it difficult for a rival to gain ground. (The DNC claimed that it had only facilitated negotiations between the campaigns and the networks and didn’t dictate the schedule by fiat.) But a turning point came in December when several Sanders campaign staffers took advantage of a software glitch to access the Clinton campaign’s proprietary data, and the DNC responded by suspending the campaign’s access to the database for 24 hours. The organization said that the suspension was required to review the security breach, but Jeff Weaver issued a blistering press release accusing the DNC of “actively attempting to undermine” the campaign. “Individual leaders of the DNC can support Hillary Clinton in any way they want,” he wrote, “but they are not going to sabotage our campaign.”

As we know, the relationship went downhill from there, and the leaks reveal the degree of contempt that developed between the DNC and the Sanders camp by the end of the campaign. One can certainly argue that DNC officials should have acted more professionally, and handled the controversies that emerged more judiciously. An obvious example came after the brouhaha at the Nevada State Convention, when Wasserman Schultz attacked the Sanders campaign for not condemning his followers “violence.” She compared them to the kind of goons who might attend a Trump rally. But while there was plenty of angry invective at the convention, and some online harassment afterwards, the reports of actual violence proved to be false. The DNC’s characterization infuriated Sanders supporters—it would prove to be one of several unforced errors by the DNC.

Still, the e-mails don’t prove that the DNC rigged the primaries. Neutrality required that the committee not act to influence the outcome of the race. It didn’t require DNC officials to pretend that constantly being accused of foul play didn’t piss them off. By May, representatives of the Sanders campaign and its surrogates had spent the better part of a year leveling charges that the committee had intervened in the primaries in Clinton’s favor. In one late-April e-mail that’s been held up as evidence of the DNC’s contempt for Sanders’ “revolution,” Wasserman Schultz says Sanders “has never been a member of the Democratic Party and has no understanding of what we do.” But it wasn’t a random comment—it was her immediate response to a Politico story headlined, “Sanders: Democratic Party hasn’t been fair to me.”

A day later, DNC Deputy Communications Director Eric Walker noted that Rhode Island officials had left a number of polling places closed, and anticipated that the organization would be blamed. “Bernie leads Hillary by 4 in the latest poll,” he wrote. “If she outperforms this polling, the Bernie camp will go nuts and allege misconduct. They’ll probably complain regardless, actually.” (In the end, it was Sanders who outperformed the polling—he won the state by 12 points.)

In another e-mail widely cited as evidence that the DNC was colluding with the Clinton campaign, DNC National Press Secretary Mark Paustenbach suggests pushing a narrative to political reporters that the Sanders campaign was in disarray. But that e-mail, dated May 21, when Clinton was ahead by 272 pledged delegates, focused on refuting a series of accusations from the Sanders camp. The failure of the Sanders campaign is “not a DNC conspiracy,” Paustenbach wrote in the e-mail, “it’s because they never had their act together.”

These discussions were candid and unvarnished. And yet, in almost 20,000 unguarded e-mails among seven high-level DNC officials over a 17-month period, only a single e-mail has emerged in which a staffer floated the idea of intervening in the primaries. In a May 5 e-mail, Chief Financial Officer Brad Marshall floated the idea of “get[ting] someone to ask” about Sanders’s religious beliefs prior to the vote in Kentucky and West Virginia. But as odious as that suggestion was, there’s no evidence of such a plan getting off the ground.

We can’t say for sure that the DNC didn’t try to impact the outcome of the race, but one would imagine that in such a large trove of frank, internal correspondence, there would be some discussion of rigging the primaries, if that were indeed taking place. A search of the WikiLeaks database suggests that they were far more interested in the Republican race than the Democratic primaries. DNC staffers mentioned Ted Cruz in as many e-mails as they referenced Sanders, and Trump was mentioned in three times as many.

Some have also seized on the fact that the DNC leadership seemed pretty sure that Clinton would be the party’s nominee. The e-mails do confirm that the DNC violated party rules requiring officials to remain neutral until a candidate is officially nominated. As Ruby Cramer reported this week for Buzzfeed, “Hillary Clinton and Democratic National Committee staffers began the gradual process of merging operations and consolidating key campaign functions weeks before the primary ended.” In one exchange in late May, Wasserman Schultz says flatly, “He [Sanders] isn’t going to be president.”

The implication is that they were only so confident because they had a thumb on the scale. But while the DNC clearly broke the rules, by late March it was already clear that Sanders had only a very narrow path to the nomination; by May, he would have had to win every remaining contest by lopsided margins to overtake Clinton’s lead in pledged delegates. When Wasserman Schultz penned that e-mail, most knowledgeable observers, regardless of whom they favored, would have agreed. Neutrality doesn’t require either believing that all candidates have an equal shot of winning, or pretending to believe it.

WikiLeaks founder Julian Assange hinted this week that there were more e-mails to come. But as of now, the leaks don’t amount to much—aside from the fact that they included a breach of donors’ private data, including financial information. Also worrisome is the fact that some individuals or groups, perhaps allied with the Russian government, perhaps not, are trying to intervene in the election in a way that might lead to a victory for Donald Trump. That’s the part that may be the most troubling.