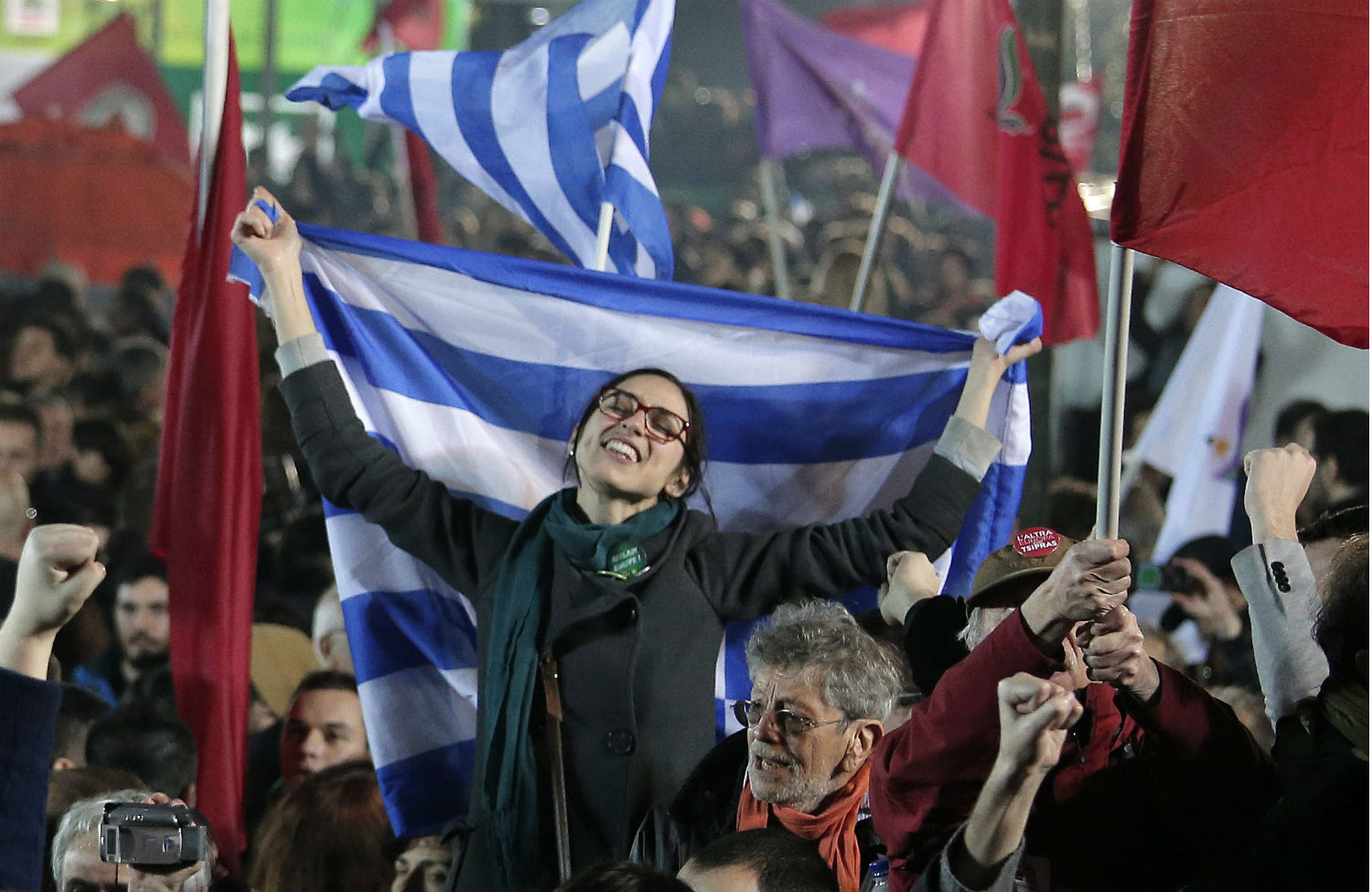 It was an amazing moment. In the Syriza campaign tent in central Athens last night, tall Germans from Die Linke, Italian communists waving their Bandiera Rossa, Podemos activists from Spain, a French couple with a Tricolore, they all clapped and swayed and danced with ecstatic Greeks. Strangers wept for joy in each other’s arms. Three young Canadians asked me where “the red party” was; a French woman hugged me and said, “Merci, les Grecs.” Rainbow flags waved among the red and purple; people were pogoing and dancing the tsifteteli side by side. The square in front of Athens University, where so many protest marches have begun, filled up with people, cameras, flags, waiting for Alexis Tsipras to make his victory speech. A giant banner proclaimed Kalimera Grecia e Europa (Good Morning Greece and Europe); a home-made placard read Gute Nacht Frau Merkel. So many Greek faces—faces that have been drawn and grey and anxious now for years—were lit up with an energy that felt half new and half remembered. Everyone knows it’s going to be hard, but something vital has been won—a battle against fear, for hope, for change.

But what change, exactly? And how? The vote for Syriza was not just a negative one, born of a desperate need for relief from austerity measures. Desperation also turns people to the far right. (The dark news from yesterday’s vote is that Golden Dawn is now the third party in Parliament, with 6.34 percent and seventeen seats, only one less than it won in 2012, even though its leadership and most of its MPs are in prison awaiting trial). The Syriza government has also emerged from a new way of doing things, a new spirit that’s taken shape through the years of crisis, a blend of self-reliance and solidarity. At one end of the spectrum are the hundreds (if not thousands) of local self-managed community projects—food banks, social pharmacies giving medicines to the uninsured, farmers’ markets without middlemen, free doctors’ surgeries, cooperative cafes. Syriza has had the good sense to support them without taking them over; the party and the projects have learned from each other. At the other end are the new small-scale enterprises selling technical know-how or design or organic olive oil. The educated young running those are more likely to have voted for Potami, the last-minute centrist party put together to occupy the yawning gap in the middle of the Greek political spectrum, which came fourth in the election. But the practical spirit—autonomy, creativity, inventiveness, getting things done yourself—is the same.

Talking to people voting yesterday in different Athens neighborhoods, from working-class Nea Ionia to leafy Psychiko, one common theme emerged. The old corrupt practices—the godfather politics, the jobs for votes, the backroom union deals, the bribes under the table, the yards of red tape and, above all, the asphyxiating power of Greece’s oligarchs, who buy politicians by the dozen and feed the population a debilitating diet of pap on their private TV channels—all that has to go. Tsipras’s promises over the last few months to attack the deep subterranean network of financial and political interests that Greeks call “the entanglements” has won him the support of young and middle-class voters who might never have voted for a left party before. The young, the middle-aged, the unemployed, private- and public-sector workers whose lives have been blighted by a culture in which you can’t get a job or a contract unless you have the right connections, all say they want meritocracy, transparency, dignity: to become a “normal” country.

Many don’t believe Tsipras can do it. Syriza, they say, has “those people” in its own ranks, and besides, such practices are so deeply embedded that they’ll take decades to change. But Tsipras himself is young and wasn’t stamped in Greece’s old political factories; nor were most of those around him. He has, if not a landslide or an absolute majority, a serious popular mandate. Now is the moment, if ever there was one, to go head to head with the dragon.

That effort may be his strongest card not only with the Greeks who didn’t vote for him but also in his negotiations with the troika of lenders (the EU, the European Central Bank and the IMF) who hold Greece’s debts. Whatever your ultimate vision for the Greek economy, there’s no way it can function in that stranglehold. Tsipras has promised to extend the period of debt repayments, to link them to growth in the Greek economy, and to negotiate a partial write-down of the debt—while reversing the cuts, labor deregulation and regressive taxation demanded by the lenders. Syriza vows to stand firm, arguing that it is in Europe’s interest to soften; yesterday’s vote was confirmation that it has enough of the people behind it. But if the Europeans turn out to be as recalcitrant as even some Syriza supporters fear, Tsipras may find himself trapped between the need to compromise and the need to hold his own party together.

And it’s not just his own party Tsipras will have to keep sweet. Two seats short of an absolute majority, his government has an agreement of support from the Independent Greeks, a right-wing populist anti-austerity party whose leader, Panos Kammenos, claimed a year ago that Greek Jews don’t pay taxes. (The outgoing New Democracy coalition, of course, had more than one politician with extreme right-wing views in its inner circle.) Apart from Neo-Nazi Golden Dawn, the Independent Greeks are the only party in Parliament committed to ending the policies of the memoranda—and Syriza has sworn not to weaken its negotiating position with the lenders by allying itself with any pro-memorandum party.

How this unlikely left-right shack-up will work is anybody’s guess. The Independent Greeks are anathema to most of the Greek left. Even leaving aside their deeply unpalatable views, they may hold Syriza back on a whole range of issues, from women’s and LGBT rights to immigration to the overweening power of the Greek church (though for the first time in Greek history the new prime minister was sworn in this afternoon with a civil, not a religious oath). Their presence may also push Syriza to ramp up the patriotic nationalist rhetoric that has traditionally united left and right in Greece, distorting the country’s sense of itself and filling the yellow press with conspiracy theories.

The alliance also sends a confusing message for the rest of Europe. Marine Le Pen of the French Front National said last week that she was rooting for Syriza to win to strengthen Euroskepticism. But Syriza is emphatically not a Euroskeptic party, which is one reason why the Greek Communist Party will have nothing to do with it. Its aim—and the aim of the thousands of European leftists and left sympathizers who were celebrating in Athens last night—is not to destroy the Union but to reclaim it from the bankers and the money men for the European people.

So there are very tough days ahead, and the possible price of failure hardly bears thinking about. This may be the left’s last chance for a long time, and not only in Greece. As a Golden Dawn supporter leaning very visibly against the doorway of a polling centre in a left-wing neighborhood told me, “We want Syriza to win so it can be stripped naked and the people will turn to us. Our aim is to come third so that we can be strong in parliament.” As far-right Eurosceptic parties rise across the continent, Brussels and Berlin would be foolish not to listen to the message from Greece last night: austerity has been a disaster, economically, socially and politically, and people are fighting back with everything they’ve got.