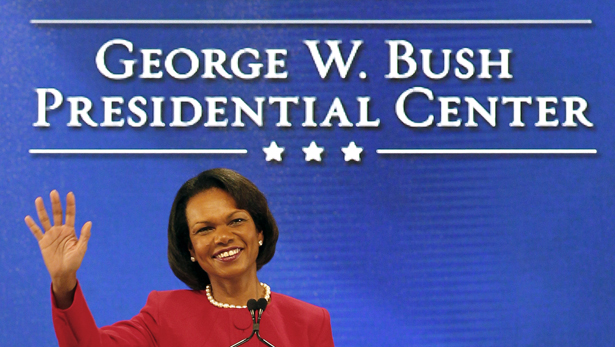 On this spring’s college commencement circuit, some of the most noteworthy names are those that didn’t make it to the podium. Although students have objected to their universities’ commencement speaker choices for years, in 2014 the protests and petitions had a pronounced effect.

On April 8, Brandeis University rescinded its invitation to Ayaan Hirsi Ali following growing objections, accompanied by a petition that garnered over 6,000 signatures. Ali, whose criticism of Islam many find intolerant and bigoted, was slated to speak and receive an honorary degree during the university’s May 18 commencement ceremony.

On May 3, former Secretary of State Condoleezza Rice declined her invitation to speak at Rutgers’ May 18 commencement in the wake of sustained protest by students focused on her role atop George W. Bush’s foreign policy apparatus. Students and faculty members alike had questioned the university’s decision since its February 8 announcement of Rice as speaker and honorary degree recipient. When she withdrew her agreement to speak, Rice wrote on her Facebook page that her invitation had “become a distraction for the university community.”

At Smith College, an online petition, protest and letters sent directly to IMF head Christine Lagarde led her to withdraw from speaking at the university’s commencement ceremonies less than ten days after Rice’s announcement. In their petition, students made clear they were uncomfortable with Lagarde not on a personal level but with her role as a representative of the IMF, an institution that, “has been a primary culprit in the failed developmental policies implanted in some of the world’s poorest countries.”

Most recently, former UC Berkeley Chancellor Robert Birgeneau withdrew from his planned speech and honorary degree at Haverford after students and faculty members sent him a letter asking him to publicly apologize for his handling of a violent police breakup of a peaceful 2011 Occupy protest at Berkeley.

While these withdrawals have garnered much media attention of late, the student protest efforts have been portrayed as infantile and misdirected. Students have been accused of being unwilling to entertain views that conflict with their own, of acting like “young thought police” and impeding free speech.

Yet, with the exception of Ali, the speakers chose to bow out of the commencement ceremonies of their own volition. If speech was inhibited in this case, it was by their own hand. The right to free speech doesn’t come with a guarantee that the response to it will be positive and polite.

If students are image-conscious, it’s not because, as Amanda Hess at Slate put it, they are chasing a “commencement experience that perfectly reflects both the stature and the political values of their elite higher educations.” They are not demanding the right to a speaker that makes them look radical chic. They are instead paying attention to the impact they and their university have on local and global communities. Instead of spending their four years focused on their own social and academic lives, students are trying to hold their administrations to account, and questioning the choice of commencement speakers is one small part of that strategy.

Missing, conveniently, from much of the criticism was an acknowledgement that speakers were not there to deliver their message to students on a value-neutral platform. Writing in The New York Times, Timothy Egan argued that the student protesters were “afraid of hearing something that might spoil a view of the world they’ve already figured out.” At The Daily Beast, Olivia Nuzzi was even more derisive: “God forbid these delicate students should be exposed to an idea or an organization with which they disagree—at college.”

But it wasn’t an unwillingness to listen to a contentious viewpoint that spurred student objections, it was the conferring of honorary degrees to those speakers, a tacit endorsement of their work and legacies. Rutgers student Jaweerya Mohammad underscored this point when she wrote in the school’s paper, “It should have been alarming that a woman who was responsible for the death of one million Iraqis, 5,000 US soldiers and who approved torture techniques such as water-boarding was being given an honorary degree and $35,000 by our University.”

There is a place to engage opposing viewpoints. But commencement isn’t a debate forum. Students should able to round out their college years in a ceremony reflective of the values that made them choose that school in the first place. Underlying these critiques is a deference to custom, to protocol that supercedes serious consideration of the role institutions, and their honored guests, play in the world. We should be applauding students for choosing message over status.