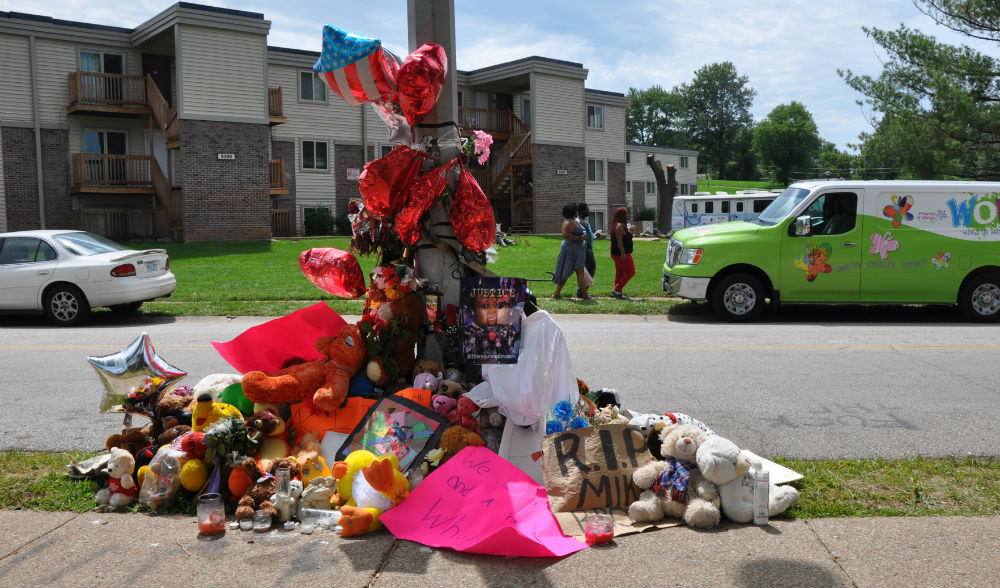 A memorial for Michael Brown at Canfield Green Apartments in Ferguson, Missouri (Photo by Steven Hsieh)

Ferguson, Missouri—Three Mondays ago, Glenn Robinson was walking toward a protest at the end of his street when his eyes started to sting and his throat swelled up. Robinson, 63, immediately recognized the sensation. He first encountered tear gas more than four decades ago during basic Army training for the Vietnam War. But this time it was Robinson’s local police, not his fellow soldiers, that had fired the chemical weapons.

“It brought back bad memories,” Robinson said, sitting on a lawn chair on a sweltering Sunday afternoon. The retired veteran decided to skip the day’s protest and ran back to his daughter’s Canfield Green apartment, where he has lived for three years. They shut their screen door and blasted air conditioning to stop the tear gas from drifting into their home. But the damage may have already been done. Robinson is still dealing with a “peculiar feeling” in his throat and plans to see a doctor as soon as he gets the chance. “I’m going to the Army surplus store to buy myself a gas mask,” he said. “The police showed me that I should be prepared for anything.”

After two weeks of chaos and confusion, life for residents of Canfield Green, the predominately black apartment complex where officer Darren Wilson shot and killed Michael Brown, is slowly returning to normal. Not long ago, nightly protests on West Florissant Avenue—and the heavy-handed police response to them—disrupted neighborhood life, taking a major psychological and financial toll on residents. Tear gas and smoke launched by police drifted from the center of unrest, about a quarter-mile west, into people’s apartments. Blockades and checkpoints locked residents in, keeping them from going to work and school. Nearby convenience stores and markets, for some, the only feasible destination for groceries, closed after a small number of looters broke in late at night. On top of these challenges, residents were still grappling with the enduring image of a teenager gunned down in broad daylight right outside their homes and a growing feeling that the community’s police department does not exist to serve or protect them.

“In my book, we’re basically living under martial law,” said Adrian Wilkerson, standing across a makeshift memorial marking the spot of Michael Brown’s death. Brown often stayed at Wilkerson’s apartment to hang out and create rap music with his fiance’s brother. Although he appreciates the protests, Wilkerson has avoided West Florissant to be with Brown’s family and attend to his own life. “I don’t have time to get tear gassed or shot with rubber bullets. I have kids.”

Wilkerson, 27, found a job through a temp agency for an energy company further out in the suburbs. But at the height of the protests earlier this month, the bus he takes to work never came. Transportation officials had redrawn the only route that stops at Canfield Green to avoid the protests. Like other residents that spoke with The Nation, Wilkerson didn’t get the memo. He missed several days of work as a result, and says he’ll have trouble paying his bills this month. Wilkerson added, “Some people want to say, ‘These people don’t want to work.’ How can we work if we can’t even get on the bus?”

Earlier during the protests, when snipers still lay prone atop armored vehicles and K-9 dogs yowled at peaceful demonstrators, police completely blocked off the only entrance to Canfield Green, locking residents in their own neighborhood. Marquez Larkin, 19, recorded the blockade using his cell phone camera. Larkin and his girlfriend, Britanny Williams, work for a pharmaceutical company packing pills, but missed two days as a result of the blockade, which continued on and off for about five days. Eventually they found an alternate path out of the neighborhood—a lawn at the other end of the street, now indented with tread marks.

Once the unrest settled, police stopped blocking the entrance to Canfield Green. But an ID checkpoint further south on West Florissant was yet another hindrance to residents. Larkin, who moved to the neighborhood in June, still hasn’t had a chance to update the address on his driver’s license, so he was forced to drive several miles to avoid the checkpoint, burning extra fuel, in order to get back home. “I’m managing, but I’m behind on my rent now. We’re making just enough to get by,” Larkin said in his third-floor apartment.

“Officers were placed at these intersections to allow residents in and out access to help assure their safety,” a St. Louis County Police spokesperson said in an e-mail in response to questions about the impact the police presence had on residents of the apartment complex. “Whereas there may have been incidents where residents could not get home, no such reports were made to our communication center or our Internal Affairs Unit.”

The majority of Canfield Green residents who spoke with The Nation said they are not planning to move away from the neighborhood in the near future. But Elizabeth Moore, a 28-year-old home health aid, and Tramon Arthur, a 26-year-old hair stylist, couldn’t take it any more. The two, neighbors and friends, broke their leases and moved to a motel to keep their kids safe. “There’s been so much ruckus and chaos that just we packed up. They hit the boiling point for us,” Arthur said, sitting at a burger restaurant on West Florissant. “We’re scared for our lives. My kids are crying. Police are running up with guns by them,” Moore added.

Although she has been inconvenienced by the checkpoints, Wanda Edwards, 57, said she can tolerate the heavy police presence on West Florissant. “I understand they have to do their job. I understand they have to protect themselves, as well as the community. Though some of the things were over the top—all that riot gear and such,” she said on her second-floor deck. “At first, when it was really violent, it was really nerve-wracking. It has not been a good experience.” Edwards was supposed to start school at Columbia College last week, where she’ll be working towards a bachelor’s degree in human services, but she couldn’t figure out how to get out of her neighborhood.

The people of Canfield Green may have differing opinions about the recent police occupation of Ferguson, but everyone who spoke with The Nation agreed that Michael Brown met an unjust death at the hands of Darren Wilson and that something must change. Glenn Robinson, the Vietnam War vet, spoke of endemic racial profiling by area police. “They’ve been doing this shit for years and years and years. Since I was a kid,” he said. Wanda Edwards, who had never seen a dead body before Brown’s, said the police “need to come up with a better mindset on how they deal with people.” Tramon Arthur, who said he hurled a tear gas canister back at police after getting maced, wants “justice for the next generation of kids. This is history right now.”

Adrian Wilkerson, who often hosted Brown at his apartment, said he left South St. Louis because he thought Ferguson would be a better place to raise his two children, but now he feels like “there’s no hope for them—for how society sees them.”

“The guy the police officer killed was going to start college. He wasn’t into the negativity, and for them to take someone like that—how do you think that makes a person that has made a mistake or has been locked up before feel? ‘Oh, ya’ll just killed somebody that did nothing wrong, so I know you’re going to justify doing something to me?’” Wilkerson said. “The police feel like we’re taking this too seriously. You have to understand, they gunned him down like he was an animal. Then they left him in the street like he was road kill.”