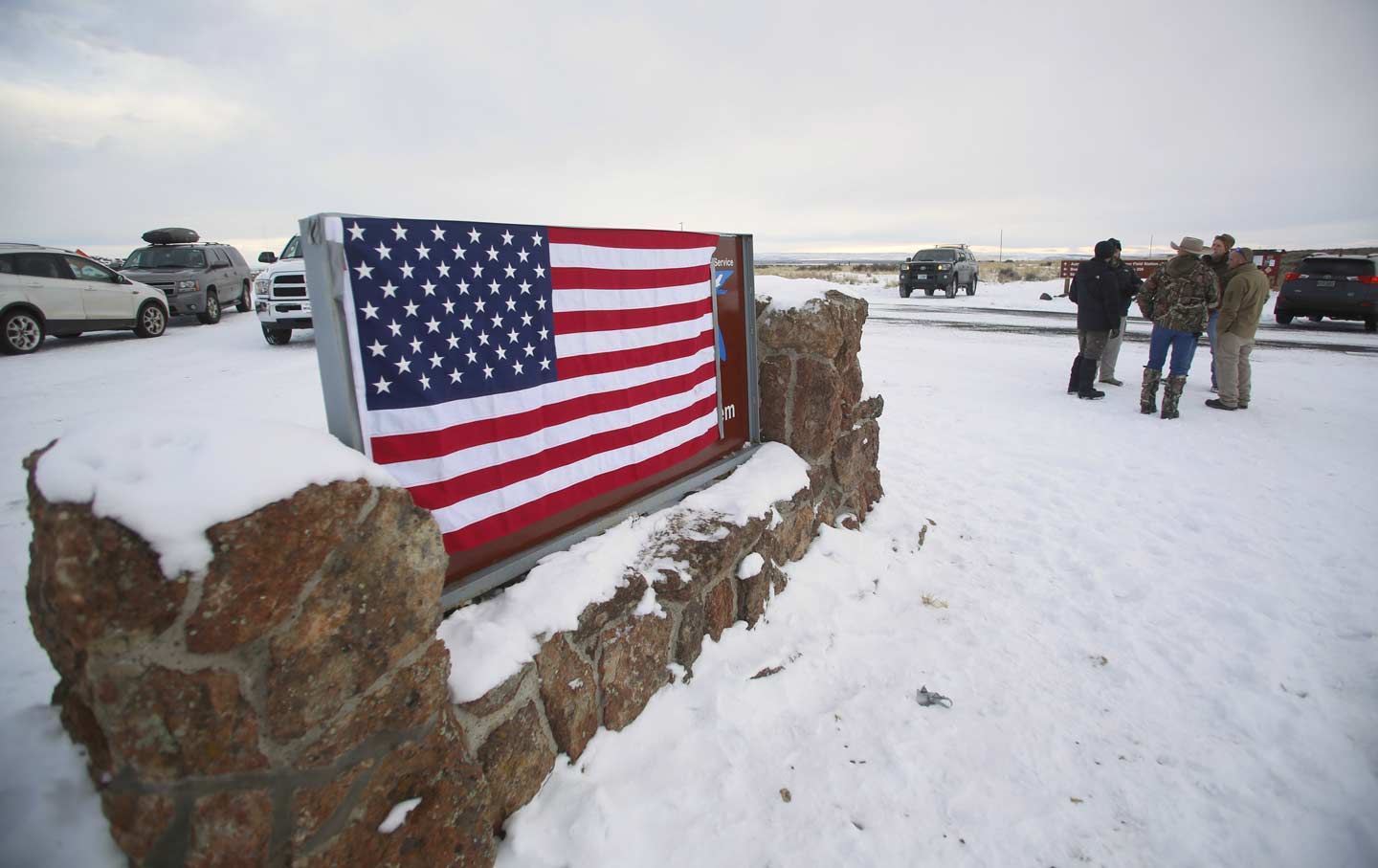 A US flag covers a sign at the entrance of the Malheur National Wildlife Refuge near Burns, Oregon, on January 3, 2016. (Reuters / Jim Urquhart)

The armed militants who have invaded and occupied a national wildlife refuge in Oregon—with talk of how they are “willing to kill and be killed if necessary”—feel a need to announce that “We are not terrorists.”

The gun-toting children of anti-government zealot Cliven Bundy and their allies want to define themselves as “patriots.” But they lack the faith in the American experiment evidenced by citizens who have historically sought to achieve change by engaging in political activism and nonviolent civil disobedience. The faux “patriots” who have invaded Oregon are confronting not merely the government but the rule of law, and they have as their stated goal an extreme restructuring of the approach of the United States to the physical environment, to Western lands, and to nature itself.

In addition to demanding the release of Oregon ranchers who have been convicted of committing arson, the occupiers of the Malheur National Wildlife Refuge are demanding that the federal government abandon one of the most precious spaces in America to ranching and development. The Bundy boys want the refuge “shut down forever”—proposing that “the federal government relinquish such control” of federal lands as part of a broader assault on the very idea that the people of the United States might protect and preserve pristine areas.

Condemnations of federal land management have long been voiced not just by the extreme right but by conservative politicians and media outlets that object both to land management policies and to serious protection of wetlands and wildlife.

Texas Senator Ted Cruz has decried recent federal Bureau of Land Management policies and proposals as an “extreme land grab” and in 2014 ripped the federal response to an armed standoff with Cliven Bundy and his backers in Nevada. As Washington’s The Hill newspaper recalled, “Cruz lamented the Bundy standoff as ‘liberty under assault,’ but later rebuked the rancher for making remarks about African-Americans that he called ‘completely unacceptable.’”

Bundy’s sons have taken their father’s anti-government extremism to a new stage with their demand that wildlife refuges be relinquished to ranchers and miners for exploitation of the land.

They are not merely attacking current practices. They are attacking a century of federal policy that is rooted in what was once a Republican-led commitment to conservation and the protection of wildlife.

“Malheur National Wildlife Refuge was established in 1908 by President Theodore Roosevelt [a Republican] to protect the vast populations of waterbirds that were being decimated by wanton killing by the plume trade,” explains the Audubon Society of Portland. “The 188,000 acre refuge represents some of the most important bird habitat on the Pacific Flyway. It is one of the crown jewels of the National Wildlife Refuge System and belongs to all Americans.”

In a statement issued Sunday by its conservation director, Bob Sallinger, the Oregon group that has been in the forefront of Audubon Society efforts to build broad constituencies for the preservation of habitats for native birds and wildlife, argued that “The occupation of Malheur by armed, out of state militia groups puts one of America’s most important wildlife refuges at risk. It violates the most basic principles of the Public Trust Doctrine and holds hostage public lands and public resources to serve the very narrow political agenda of the occupiers. The occupiers have used the flimsiest of pretexts to justify their actions—the conviction of two local ranchers in a case involving arson and poaching on public lands. Notably, neither the local community or the individuals convicted have requested or endorsed the occupation or the assistance of militia groups.”

“Portland Audubon fought 100 years ago to protect this incredible place. The powerful images taken by Portland Audubon founder, William Finley, of Malheur’s incredible bird populations and the wanton killing that was being inflicted upon them, caused President Roosevelt to make Malheur one of the first wildlife refuges in the Western United States,” the group’s statement continues. “Portland Audubon calls upon the local, state and federal authorities to once again protect this incredible place for the amazing wildlife that live there and to preserve this natural heritage for current and future generations. Portland Audubon greatly appreciates the outstanding federal employees that staff the refuge, as well as members of the local community who have rejected this occupation. We hope for a safe, expeditious end to this armed occupation so that the myriad of local and non-local stakeholders can continue to work together to restore Malheur in ways that are supportive of both the local ecology and the local economy—the occupiers are serving nobody’s interests except their own.”