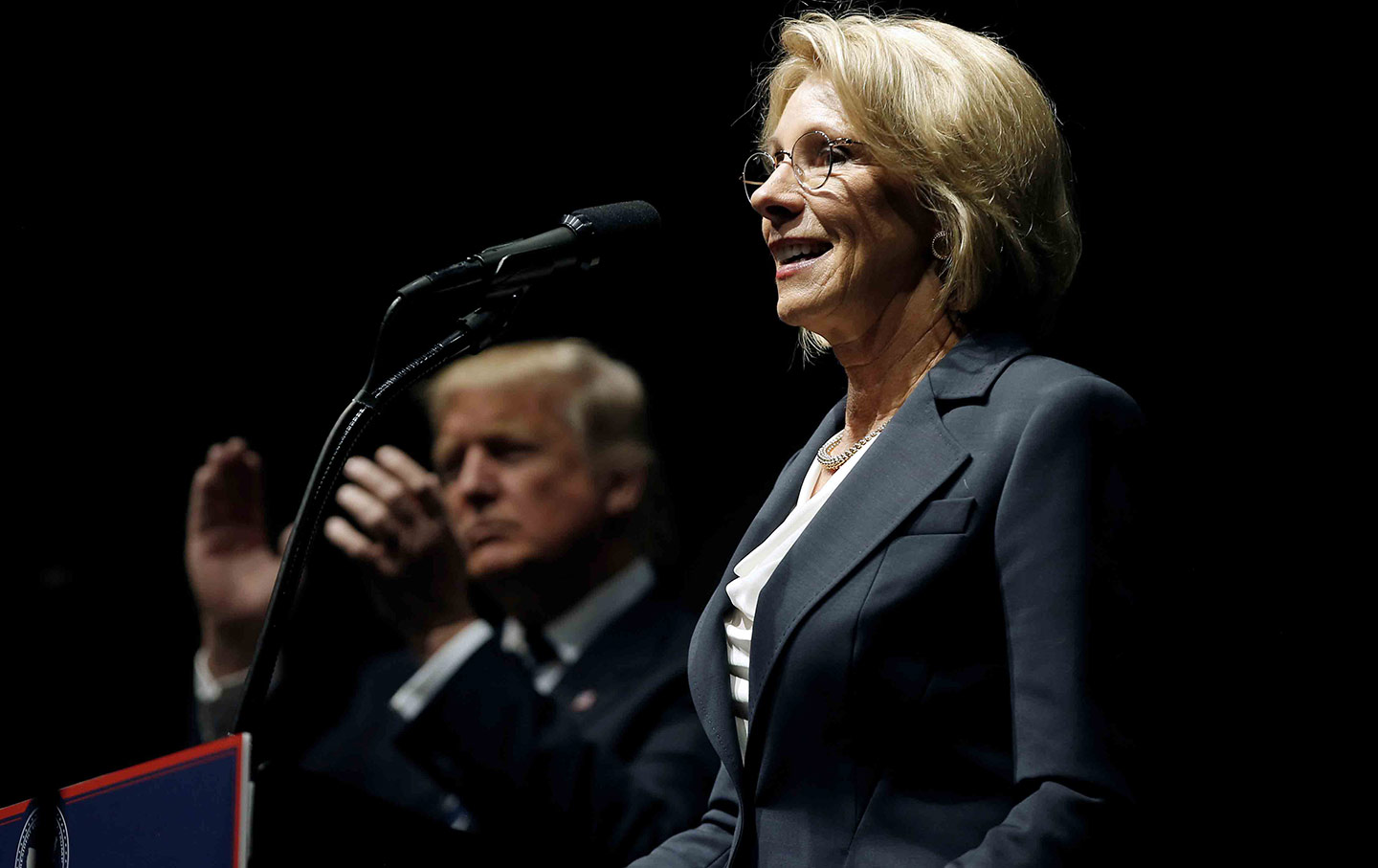 When questioned on her commitment to principles of diversity and equality in public education, Education Secretary Betsy DeVos keeps repeating one conservative mantra: “choice.”1

When pressed during her confirmation process on school desegregation policies, her coy answer—“I do not support programs that would lead to increased segregation”—was laced again with that market-friendly code word: “Empirical evidence finds school choice programs lead to more integrated schools than their public school counterparts.”2

The concept of “school choice,” which emphasizes individual family preferences in how students and funding are distributed, squares neatly with the neoliberal reform agenda of pushing public education into the realm of private business. Who could oppose self-determination for parents, after all? But in a “free market” built on an unjust system, not all choices are created equal.3

Yet that seems to be DeVos’s vision of “diversity.” Her abrupt decision to cancel an Obama administration program designed to help communities desegregate schools, known as Opening Doors, Expanding Opportunity, has outraged education advocates, who fear Trump will aggravate social barriers in K–12 education. The program was relatively small-scale—just $12 million in seed grants issued to school districts across the country seeking to develop “locally driven strategies to increase socioeconomic diversity in schools.” The grants would barely dent the system-wide civil-rights crisis of school segregation, but DeVos claimed even this fledgling program was unworthy of taxpayer dollars because it was focused on planning and not “implementation,” The Washington Post reports.4

Advocates say the cuts mark a setback for creative school-diversity programs that are trying to uphold the constitutional precepts established in Brown v. Board of Education, the precedent that commits the government to correcting institutionalized racial barriers in education by proactively desegregating schools.5

DeVos argues the private sector should be trusted to help schools redistribute opportunity, by expanding corporate charter schools and giving families vouchers to finance private schooling, as a supposedly higher-quality alternative to neighborhood schools. But often, these programs end up slowing or reversing desegregation for the families who most need it.6

Given the option to transfer to more affluent schools, parents typically make the “rational choice” to perpetuate “white flight” from poorer, blacker urban centers. The flip side of choice is the de facto exclusion of children of color, who get left behind with underfunded, understaffed “inner city” schools.7

According to the Century Foundation’s analysis of the long-term impact of school vouchers on segregation:8

As with Jim Crow, classrooms don’t integrate when individuals make nice choices—but when lawmakers act for the collective good.10

But can’t voucher funds help poor families escape poor school districts? According to the Network for Public Education, “The amount of money contributed by the voucher is hardly ever enough to pay for full private school tuition,” so poor parents likely still couldn’t afford a much better private alternative to their regular neighborhood schools. Private and parochial schools, moreover, can more freely discriminate in their admissions on the basis of race, sexual orientation, gender, or religion, and are subject to less oversight on standards and curricula. So private institutions might have greater leeway to flout state standards by teaching, say, “intelligent design” instead of evolution, or downplaying the history of the slave trade.11

Yet the districts selected for Opening Doors aren’t against choice; they simply want to balance choice with fairness. They’re also victims of the pro-privatization agenda that DeVos champions.12

In New Orleans, a charter-school industry boom that followed Hurricane Katrina has resulted in decreased instructional spending, while raising administrative costs by two-thirds. Opening Doors seed money could have helped policymakers equalize opportunity across schools, but as one of the country’s leading advocates for charter schools, DeVos seems more interested in expanding the New Orleans model nationwide rather than addressing the deep racial segregation that has persisted since the Jim Crow era.13

Another would-be grantee, Detroit, was a laboratory site for DeVos’s previous campaign to promote charters across Michigan. The only problem: The growth of the charter sector and school-choice policies have been linked to systemic patterns of housing and school segregation.14

Many school choice options, including vouchers, were established in part to offer alternatives to the local school and counter this link between neighborhoods and schools. However, some people are better able to exercise “choice” than others—taking advantage of school choice options depends on knowing and understanding the options, having an option located close by or having transportation available, and having enough seats available.16

But even if DeVos masks attacks on public education as a kind of “free choice,” Century Foundation researcher Holly Potter points out that many communities have chosen to commit to school diversity as a public-policy priority. Giving kids more equal educational opportunities helps decrease residential segregation and create more inclusive neighborhoods in the long run. Since schools are so linked to surrounding social gaps, progressive communities should recognize that “Housing policy is school policy, but school policy can also be housing policy.”17

Some districts have used “controlled choice” desegregation plans, for example, which can provide voluntary ranked-choice systems, in which school assignments are structured to prioritize the needs of disadvantaged students without aggravating existing socioeconomic gaps. According to Potter, “If DeVos is actually interested in school choice, then expanding public school choice options like these would be a fantastic way to meet the goals of integration and choice at the same time. Unfortunately, DeVos seems to have a very narrow definition of choice focused on school vouchers.”18

The Trump administration may be regressing to the days of “separate but equal” through deregulation and privatization, but in the face of a neoliberal assault and eroding federal support for educational justice, the one choice local communities all have now is to resist Trump’s agenda, and instead work collectively to renew the lessons of Brown v. Board of Education for a new generation.19