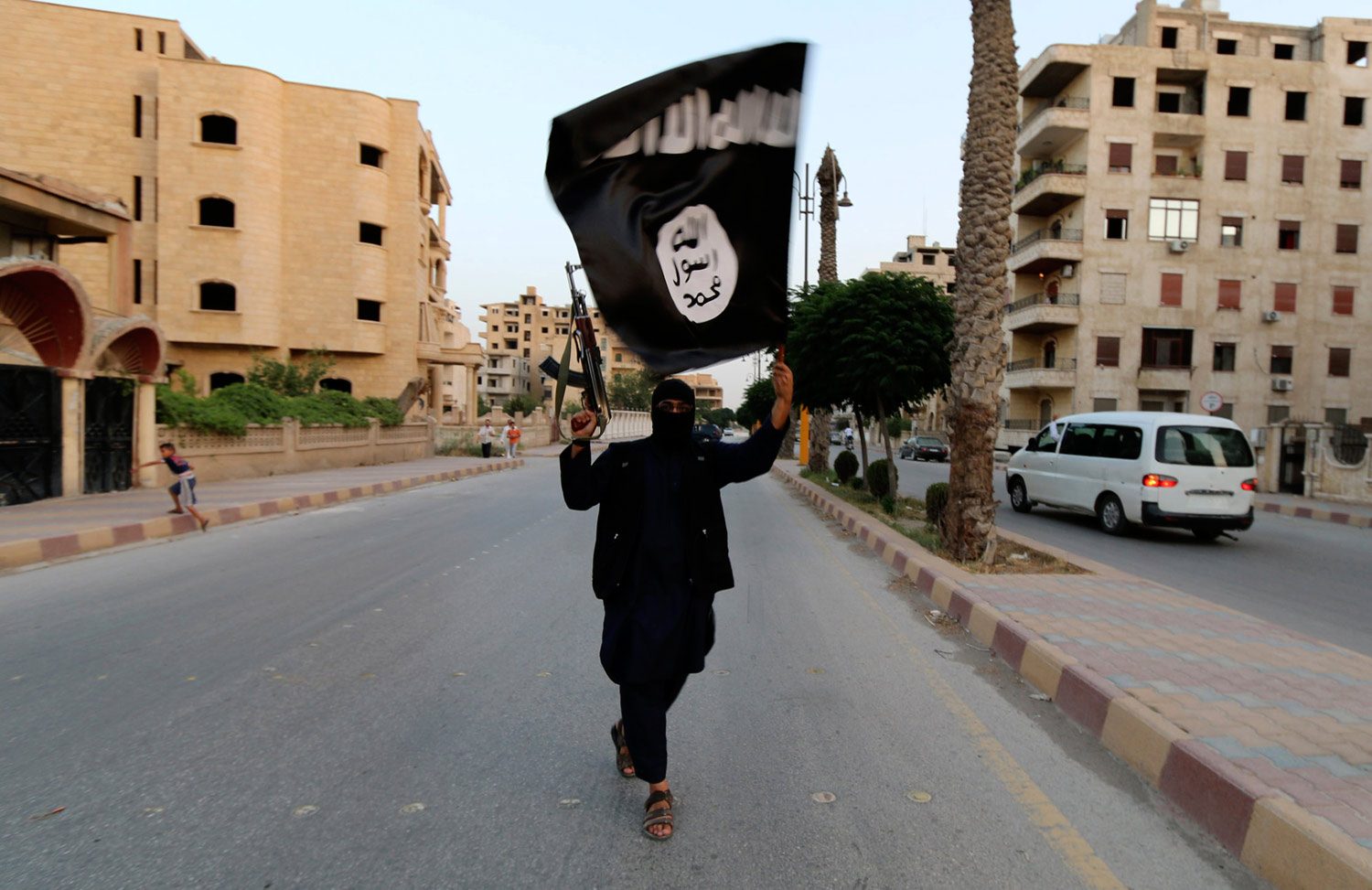 A member loyal to the Islamic State in Iraq and the Levant (ISIL) waves an ISIL flag in Raqqa on June 29, 2014. (REUTERS/Stringer)

‘ISIS’ vs. ‘ISIL’ vs. ‘Islamic State’: The political importance of a much-debated acronym," by Jaime Fuller. The Washington Post, September 9. 2014.

The words we choose to use and how we use them are important, no doubt about that. Is someone a terrorist, enemy combatant or freedom fighter? You get the point. These words take on even more importance in the world of politics. Turns out, acronyms are pretty important too. Is it ISIS, ISIL or Islamic State? The reasons to use each acronym vary, as this Washington Post article points out. The nexus between what a group is called, what politicians across the aisle call them and what the media trying to cover it all call them, converge here.

Aaron Braun focuses on the psychology and politics of work, histories of socialism, and progressive critiques of Zionism.

Kristen Dombek's most recent addition to "The Help Desk" has stuck with me. Office workers, take note: although Dombek's magnanimous style makes it tempting to read in fits and spurts between small tasks, it's a much better read in one sitting.

In Coates's typical expert fashion, this is a personal, political and intellectual meditation on several intersecting issues related to race, class, culture, colonialism and education. Unlike much of the current education news coverage on privatization and reform, this piece takes a step back and looks at some of the larger philosophical questions around learning and institutions. Through telling the story of his experience learning French in a summer program at Middlebury College, Coates explores what value educational institutions hold for the people who have historically been most oppressed by them (hint: it's not "respectability").

Pamela Colloff's latest for Texas Monthly gives us an intimate look at Michelle Lyons, who witnessed 278 executions in Texas. Although some of Colloff's most memorable works have focused on wrongful convictions, this piece explores a side of the criminal justice system that's often undocumented: how the people who are charged with keeping the system moving are affected and are forced to live with their own complicity in the process of incarceration and execution. Now that she has left her job with the Texas Department of Criminal Justice, Lyons is grappling with her memories of the executions that intrude "with such frequency that Michelle no longer trie[s] to push them out of her mind." Colloff's piece takes us inside those memories and forces us to confront, in a nuanced and thoughtful way, the way executions are carried out in contemporary America.

The suspension of Ray Rice from the NFL, after footage emerged of his brutal assault of his then-fiance, Janay, has led to a national conversation around intimate partner violence. Victim blaming has unfortunately been a large part of this conversation. A hashtag response to this victim blaming emerged on Twitter to give voice to often silent, invisible victims. Survivors of intimate partner violence shared their stories using the hashtags #WhyIStayed and #WhyILeft. Jared Keller at Mic offers a round up of some of these important tweets.

“Public Universities Ramp Up Aid for the Wealthy, Leaving the Poor Behind,” by Marian Wang. ProPublica, September 11, 2013.

This long piece looks at how public universities are giving less money to students in the lowest quartile of income, while they increase financial aid for students in the highest quartile. The idea is that public universities are giving up their responsibility of offering affordable education to students with lower incomes. I think people should care about this issue because it affects a great number of American youths—as it prevents them from accessing higher education—as well as the country itself in terms of human capital and social inclusion.

Sarah Jeong takes on Reddit's decision to delete the subreddit /r/TheFappening, where a flood of stolen celebrity photos (mostly nudes) and videos were being aggregated, and then launches into a much broader discussion about free speech on the Internet and the role of centralized platforms like Facebook, Twitter and Reddit. She concludes that "the internet has come to reflect all the ugliness and all the power imbalances of the real world, without any of the protections or even the weakest democratic safeguards." Although her proffered solution, to re-imagine free speech for the 21st century, is perhaps idealistic, it should be evident that something must be done: to address Twitter's rape threat problem; to prevent Facebook from deciding certain things aren’t news, like Ferguson, for example; and, more generally, to ensure that big tech companies are not "deaf to the people."

Terri Jean Bedford, a dominatrix whose federal suit overturned the laws banning prostitution in Canada (Bedford v. Canada), was expelled from Parliament after railing against the Conservative government's bad-faith attempt to replace the laws the Supreme Court deemed unconstitutional with even more punitive anti-prostitution laws. Bedford, upon learning of this and attempting to engage lawmakers, was met with political barriers and doublespeak. In response, she threatened to out politicians who had made use of sex worker's services, telling the Parliament that, “I’d also like to say if this law passes, I’m going to make you guys forget about Mike Duffy, because I’ve got more information and more proof on politicians in this country than you can shake a stick at. I promise.” (!!!)

Earlier this week marked the first Ferguson City Council meeting since the death of Michael Brown. Residents from Ferguson, St. Louis and nearby communities voiced their dissatisfaction and appealed to the local and state governments over their handling of the killing of Michael Brown. It is completely reasonable for communities to be outraged: It has been a little over a month since a Ferguson police officer, Darren Wilson, shot and killed 18-year-old unarmed Michael Brown, and to this day Darren Wilson remains on paid administrative leave. The anger that washed over the audience was telling because their display of outrage at the council meeting is at the heart of political engagement. Political engagement is not about not being complacent, but it is about assembling and confronting their political leaders on issues and decisions that affect them. The ways in which these actions emerge are sometimes not fully accepted or efficacious, but nevertheless political engagement is an indication of community ownership.

This week, TMZ released footage showing NFL running back Ray Rice punching his then-fiancee-now-wife, Janay Palmer, unconscious. Rice was soon suspended indefinitely from the NFL. Palmer then posted an Instagram defending her husband, which caused some people to question how she could stand behind him after he beat her. The conversation continued to social media, where survivors of domestic violence used the hashtags #WhyIStayed and #WhyILeft to give more context to Palmer's situation. This article, first published in Granta in April, gives readers glimpses into the physical, mental and emotional abuse the author's husband inflicted on her. Each of her fragmented memories stings like a scabbed wound that has been cut open again, leaving the reader feeling raw and exposed. While we all agree that victims of domestic violence deserve better, Sundberg bravely shows us why she stayed, and, in doing so, encourages us not to judge those whose situations we can't truly comprehend.