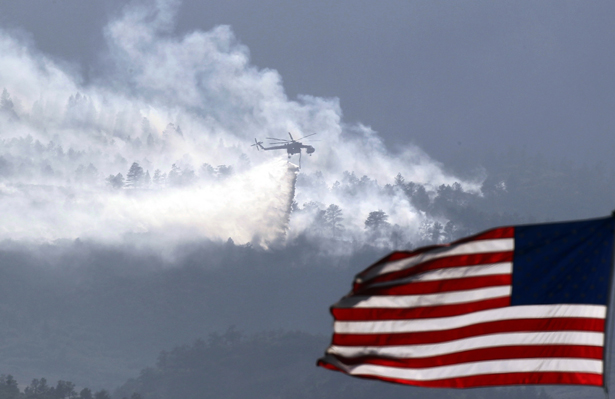 A helicopter drops water on a wildfire raging at the edge of Colorado Springs that in one night doubled in size and forced more than 32,000 people from their homes. (Reuters/Rick Wilking).

With the World Cup just weeks away, protests have been erupting across Brazil as people reject the spending of public money for the financial profit of the few. While the World Cup might dominate headlines as the most glaring example of wasteful spending in the sporting world, this is an increasingly common trend across the world. Lavish, luxury-box-filled stadiums are approved and built when owners insist on a team’s “important role” in “the community”—the same community that is denied a democratic vote in the process, robbed of tax dollars used to fund the construction and is eventually priced out of attending games altogether. In my home state of Georgia, Major League Baseball’s Atlanta Braves have jumped aboard this elitist bandwagon with unbridled enthusiasm. On Tuesday, a public meeting was held on the building of a new stadium for the Braves in the Atlanta suburb of Cobb County. Pro-stadium business interests waited in line for several hours in the middle of the day, snatching up all twelve of the meeting’s speaking slots while normal people worked. Speaking to The Atlanta Journal Constitution, Rich Pellegrino of the group Citizens for Governmental Transparency decried the situation. “We’re working people,” Pellegrino said. “We’re not on corporate welfare. It’s a slap in the face.” Unsurprisingly, all twelve speakers spoke in favor of the stadium, and the county commissioners unanimously voted to devote almost $400 million in taxpayer money from a county that is laying off teachers and slashing spending on public services.

“Let’s call the Isla Vista killings what they were: misogynist extremism,” by Laurie Penny. New Statesman, May 25, 2014.

Innumerable responses to the Isla Vista killings have made their appearances in the last few days, but Laurie Penny has delivered, I think, the most important, the most eloquent and the most biting. She refuses to allow statements like “There is no creature more evil and depraved than the human female” and “Women should not have the right to choose who to mate and breed with” to be read as the random products of mental illness rather than as an integral part of a culture-wide ideology of violent misogyny. Female writers and public figures receive messages of hatred and threats of gruesome violence from strangers every day, she reminds us, and the fact that most of these are not acted upon shouldn’t mean we can mentally separate them from the language and actions of Elliot Rodger. I think the most important demand this essay makes is that violent misogyny and misogynist violence be denaturalized: it is not “normal” or inevitable that women are treated this way merely for existing, and it should be recognized as part of backlash against not (just) individual women who deny people like Elliot Rodger what they think they deserve, but against women in general who “as a class, as a sex” are fighting gendered oppression.

“Spain shows that the ‘anti-politics’ vote is not a monopoly of the right,” by Luke Stobart. The Guardian, May 28, 2014.

The rise of new far-right parties has our attention, and for good reason. May’s European elections, however, have shown a similar expression of dissent coming from the left. In Spain, where the two dominant parties saw their share of the electorate drop from 2009’s 81 percent to 50 percent, a new left-wing party captured 8 percent of the vote. What are the virtues and dangers of these trends? How is apathy rousted?

This first installment of GlobalPost’s series on youth unemployment around the world looks at not only the protests against the World Cup but also the broader socioeconomic marginalization fueling them. While it’s richly reported, it doesn’t suggest many solutions for the issue beyond that the Brazilian government, of course, already ought to have focused its resources on projects that would more directly benefit its poorer citizens. But it’s hard to fault the article too much for that—the massively challenging nature of the problem is why GlobalPost launched this series in the first place. It will be interesting to hear if youth in other countries agree with the young favela tour guide quoted here, who, despite expecting to benefit personally from the World Cup’s tourism boost, “would trade the business for more social equality in his own community.”

After Hurricane Katrina, the state of Louisiana took control of almost all of New Orleans’s public schools in what became the Recovery School District, now the first district in the nation to go all charter. It is, writes Lyndsey Layton, “a grand experiment in urban education for the nation.” The fruits of the country’s “experiments” with public education over the past two decades are clear throughout the piece, from the measures chosen to rate school effectiveness (test scores, naturally), to the tired argument that charter schools bring agency to parents and their children. There is no choice, however, when it comes to determining test subjects for these grand experiments: in most instances, poor children of color.

“Heralded medical treatments often fail to live up to their promise,” by Alan Bavley and Scott Canon. The Kansas City Star, May 17, 2014.

Those words sadly can’t be used to describe much health journalism produced today, especially as reporters are losing their jobs and those who stick around are tasked with producing shorter pieces at a more rapid pace.

But Bavley and Canon thoroughly examine their subject. They consider multiple cases where supposedly blockbuster treatments—hormone replacement therapy, Vioxx and others—were proven to not only be unworthy of their high cost, but actually harmful to patients. Journalists (who want a feel-good story, and fast) are implicated in hyping up new treatments before they’ve proven their worth, as are doctors and medical centers (who get more cash for using expensive treatments). But arguably medical companies and the Food and Drug Administration are most to blame. The FDA doesn’t require large-scale studies for a new drug or device to come onto the market, and medical companies are likely to only conduct clinical trials that get them the results they need for marketing approval, not to find whether their invention is truly better than what’s already out there, or good for patients. Both of my parents have battled medical issues in the last few years, so I understand the desire for a perfect cure and a quick fix. But good science takes time, effort and money, something most medical companies are unwilling to invest if it means slowing down a potentially blockbuster product. Without more rigorous oversight, patients end up paying more than they need to—both with their pocketbooks, and potentially their lives.

The next decade will see Kenya, Mozambique, Tanzania, Uganda and others become major African energy exporters. That this will benefit the citizens of these countries is far from certain. Economists use the term “resource curse” to describe the counterintuitive phenomena whereby the economies of nations blessed with natural resources perform worse, on average, than those with no such advantage. Too often what happens is that rather than investing mineral and petroleum wealth into public goods like health and education, a corrupt government will use the profits to consolidate power and insulate itself from public pressure. According to Freedom House, only a quarter of the world’s top twenty oil-producing countries can be said to be “free.” In the worst cases, sales of natural resources fund armed conflict, as occurred with “blood diamonds” in Sierra Leone, Liberia and the Ivory Coast. The environmental impact of poorly run mining or drilling operations can also be devastating; since 1970 there have been some 7,000 oil spills in Nigeria alone. Here political scientist Ricardo Soares de Oliveira points out that the discovery of natural resources need not produce such dire effects; Botswana, to cite just one encouraging case, put its diamonds to good use and is presently one of the fastest-growing economies in the world. Outsiders in solidarity can leverage what influence we may have, but ultimately, as de Oliveira writes, “success depends most on popular mobilization,” on the ability of local reformers to “push questions surrounding oil and gas to the center of political life and foster large-scale activism against bad governance.”

While Ta-Nehisi Coates’s article has deservedly been drawing a ton of media attention in the last week, I’d like to highlight another feature in the current issue of The Atlantic. In “Fire on the Mountain” Brian Mockenhaupt looks at the way that Western states are dealing with destructive wildfires, wildfires caused by a combination of severe drought and years of an overly aggressive fire suppression policy. This article is a poignant look at the difficult risk calculations that go in to fighting fires, both on the national level and by firefighters on the ground. With devastating weather events likely to become more common over the next several decades, we would do well, as this article suggests, to think about the safest and most effective means of combating disasters.