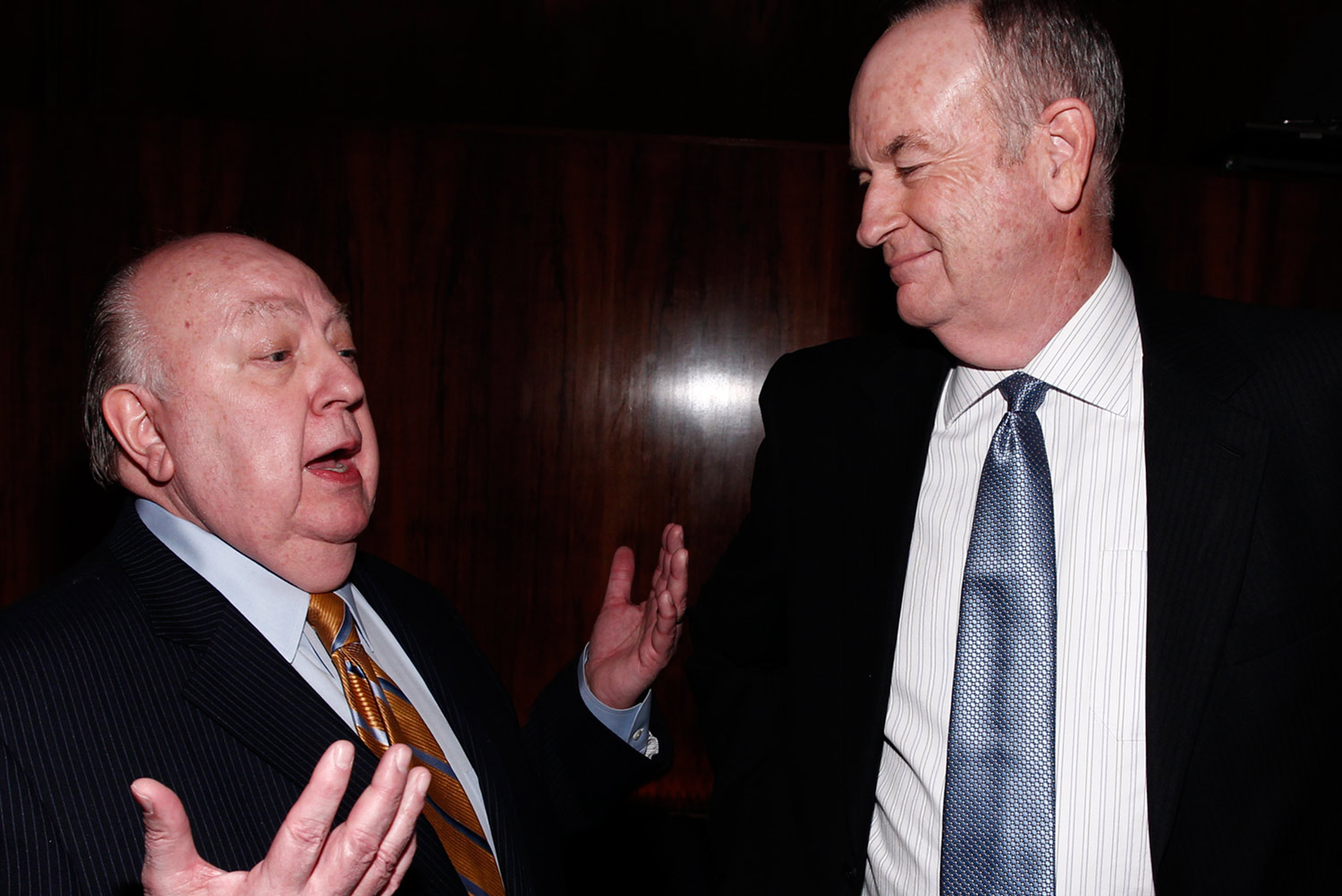 The genius of Roger Ailes and Rupert Murdoch in the creation of Fox News has two primary components. The first is financial: it doesn’t take that many disaffected, ill-informed, angry old white guys who couldn’t care less that they’re being lied to to make a cable-news network profitable, but apparently there’s enough of them to make Fox News about $1 billion a year. The second is political: by posing as a ref while actually being a player, Fox manages to corrupt the entire political playing field. What was once considered a “fact”—such as the near-airtight scientific consensus on the reality of man-made global warming, or the birthplace of the current president of the United States—becomes merely one pole in an endless “debate” in which actual evidence carries the same weight as total bullshit. You can see the results in the actions and arguments of today’s Republican Party—and, with it, America’s apparently limitless political dysfunction.

The publication of Gabriel Sherman’s 500-plus-page biography of Fox News impresario Roger Ailes, The Loudest Voice in the Room, might have been the occasion to reflect and perhaps address these developments, as it clears the air on many of Fox’s deliberate deceptions together with Ailes’s specific role in these and other semi-scandalous activities. But thanks to the same tactics that have proven so successful for Fox in the first place, we are more likely to continue arguing about Obama’s kindergarten years in Kenya.

Ailes and his minions laid the groundwork to undermine Sherman’s deeply researched account (based, the author says, on more than 600 interviews). In addition to their rather comical complaint that “the book was never fact-checked with Fox News”—when, in fact, its subject refused all cooperation—Ailes apparently helped to engineer the rush-written publication of Roger Ailes: Off Camera, a biography based more on myth than evidence, by right-wing hagiographer Zev Chafets.

Chafets’s whitewashed version of Ailes’s actions should have earned it a place on the fiction bestseller lists, as a reading of the Sherman biography makes clear. According to Sherman, for instance (but not Chafets), Ailes, in a dispute with a Jewish executive while working at NBC, apparently attacked his adversary as a “little fucking Jew prick.” Also at NBC, Sherman reports, Ailes allegedly promised a young female job applicant: “If you agree to have sex with me whenever I want, I will add an extra hundred dollars a week.” Evidence also indicates that Ailes spies on his employees and is not above using Fox for blackmail purposes.

Ailes at least comes by his paranoia honestly. At his upstate Garrison, New York, home, he allegedly “ordered the removal of all trees around his house so that he…had a 360-degree view of any leftist assault teams preparing to rush the house,” according to one local merchant, and purchased “as many surrounding houses as [he] could. Security cameras were installed throughout the property.” Ailes also reportedly ordered a bunker built beneath his mansion that would contain a six-month supply of food in the event of a terrorist attack or perhaps nuclear war.

More significant is the degree to which this man’s unbalanced view of reality spills into the “news” reports whose content he ultimately determines. According to sources quoted in Sherman’s book, Ailes apparently endorsed Glenn Beck’s lunatic accusation that Barack Obama evinced “a deep-seated hatred for white people” (which would include his own mother and grandparents) and mused aloud that Navy SEALs should “have to personally kill an illegal immigrant” as a component of their training exercises. Ignoring all previously understood rules of political propriety, Ailes actively attempted to recruit potential presidential candidates for the Republicans in 2012, including Chris Christie—his apparent soul mate—and David Petraeus, implicitly promising (at the very least) to put Fox News’s resources at the service of either man’s candidacy should he get into the race.

Hardly less alarming than the fact that America’s most successful cable news network is run by such a man has been the unwillingness of the rest of the mainstream media to confront this reality. To this day, Fox is treated as a largely legitimate member of the news business fraternity. When, early in their first term, members of the Obama administration sought to isolate Fox News owing to its habit of repeatedly misleading its viewers, Baltimore Sun critic David Zurawik professed to have heard “echoes of Nixon-Agnew” in the action and accused Obama of failing to respect “press freedom.” ABC’s Jake Tapper (now of CNN) warned then–White House press secretary Robert Gibbs that “it’s escaped none of our notice that the White House has decided in the last few weeks to declare one of our sister organizations ‘not a news organization’ and to tell the rest of us not to treat them like a news organization. Can you explain why it’s appropriate for the White House to decide that a news organization is not one?”

In the case of Ailes himself, even those publications at the deep, dark heart of the so-called liberal media put on kid gloves in his presence. Vanity Fair ran an excerpt of Chafets’s hagiography as if it were nothing more than a reporter’s fair-minded critique. Time magazine, according to Sherman, allowed itself to be bullied by Ailes’s threats into running a toothless account of Rush Limbaugh. When The New Yorker ran a story on Ailes’s efforts to strong-arm the opponents of his attempted takeover of the political and media machinery in Garrison, he liked it so much that he hired the writer, Peter Boyer, to work for Fox News. (Sherman’s detailed rendering of that story is particularly illuminating.) Meanwhile, Boyer’s good friend and former New York Times colleague, Janet Maslin, reviewed Sherman’s book for the Times (though without disclosing her relationship to one of its subjects) and found it to be “disingenuous,” “tepid” and “a great wasted opportunity.”

With enemies like these, Ailes can probably stop worrying…