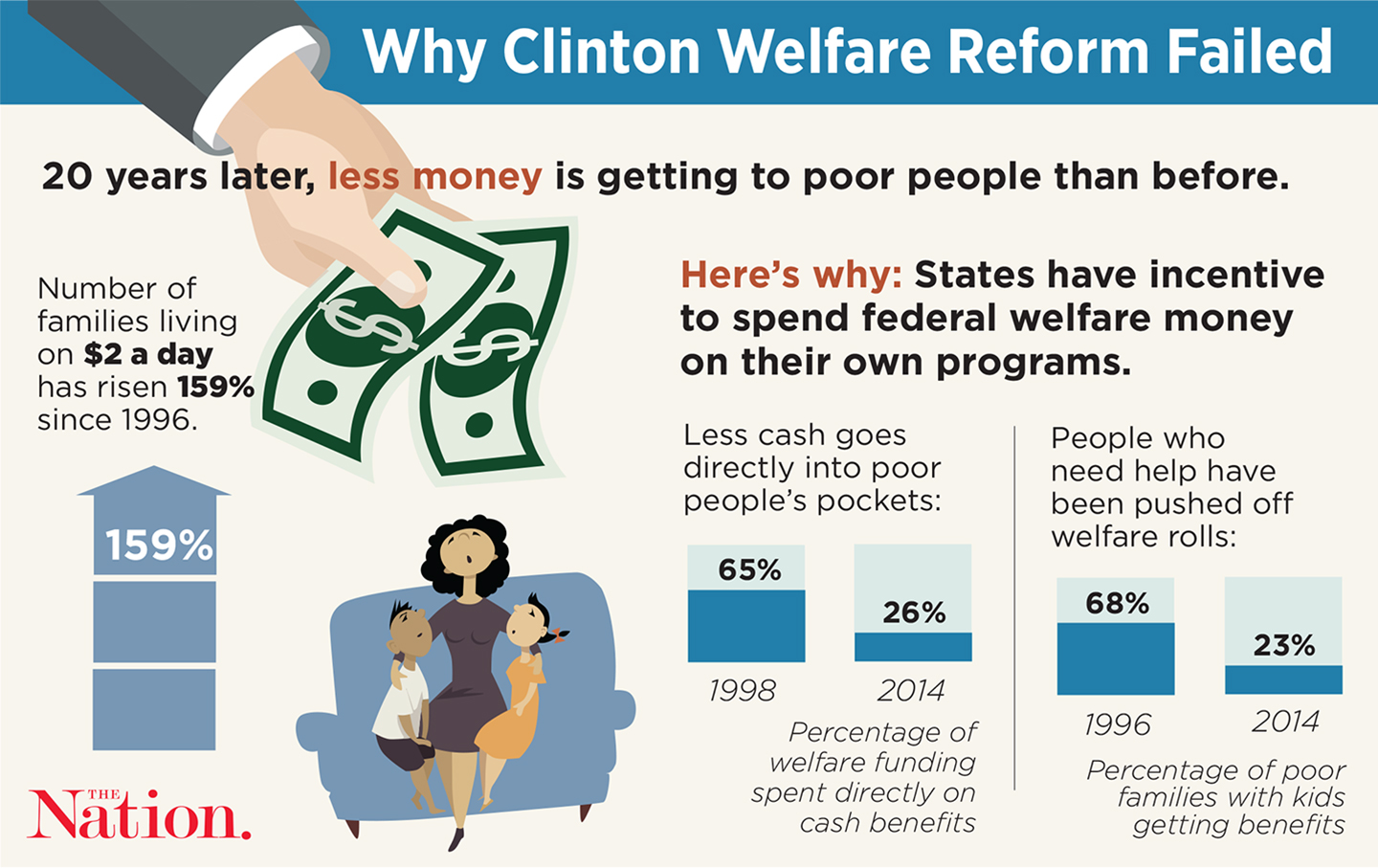 This summer, as Hillary Clinton clinched her historic nomination as the first female presidential candidate of a major party, welfare reform neared its 20th anniversary. It was her husband who signed the Personal Responsibility and Work Opportunity Reconciliation Act, and Hillary Clinton who, in her own telling, helped push it through.

The bill was a compromise with Republicans like Newt Gingrich, who insisted on cutting off government benefits for all immigrants and tried (but failed) to include a measure to take children away from unwed teen mothers and place them in orphanages. The Democrats hoped that the bill, shorn of the Republicans’ worst proposals, would push people into jobs and lower the poverty rate. Bill Clinton signed it into law in August 1996. During the economic boom of the late ’90s, the welfare rolls declined while employment ticked up, and both liberals and conservatives deemed the reform a success. But after two decades, we can take a more clear-sighted view of what happened after Bill Clinton ended welfare as we knew it.

The older version of welfare, Aid to Families With Dependent Children, was administered and funded by both the federal government and the states. If need went up, so did funding. That ended in 1996, when AFDC was turned into the Temporary Assistance for Needy Families (TANF) block grant. Today, states get a set amount of money to spend on welfare, with little federal direction. Because the grant hasn’t been increased since 1996, it has lost nearly a third of its value to inflation. Meanwhile, the new program can no longer stretch and flex in times of hardship to catch people who are falling behind. Its caseload rose just 16 percent during the height of the Great Recession, even as unemployment skyrocketed; the food-stamp program, which is not administered by a block grant, was able to rise by a healthier 45 percent.

States are barely held accountable for how TANF money gets used, so it’s become something of a slush fund for state governments. Lawmakers can use it to pay for things that they were already doing, such as pre-K or child-welfare services, saving money in their own budgets. In 1998, shortly after welfare reform, 65 percent of TANF spending went directly to cash benefits for poor families; today, that number has dropped to just over a quarter.

States are therefore incentivized to push people off their rolls, since it means more money to use for other things. Welfare reform made it easy to shrink the rolls by giving states relative freedom to decide who can and can’t get benefits, with many instituting barriers like drug tests and harsh lifetime limits. Welfare, in other words, is no longer an entitlement. In 1996, nearly three-quarters of poor families with children received benefits. Today, it’s just about a quarter.

Supporters of welfare reform had hoped that the people who left welfare would get jobs and climb the career ladder. While this has happened for some people, there is now a well-documented dark side to that story.

Since 1996, the share of single mothers with neither income nor cash benefits has risen from 12 to 20 percent. Meanwhile, the number of families in deep poverty has grown from 2.7 million to 3 million. Extreme poverty—defined as families who subsist on $2 or less for each person per day—has seen the most shocking increase: a 159 percent rise since 1996. Researchers who documented this increase found that it was particularly concentrated among those affected by welfare reform.

Despite this evidence, Hillary Clinton has stuck to her guns, insisting during this campaign that welfare reform was the right thing to do. In response to TANF’s flaws, highlighted during the recession, she’s proposed some tweaks, like getting rid of the five-year lifetime limit. But welfare today is utterly broken. It needs another full-bore reinvention, whether along the lines of AFDC or some other distribution of cash benefits. Welfare reform is a Clinton legacy of which the candidate owns at least a small part. Should she enter the White House, it’s on her to right this wrong.