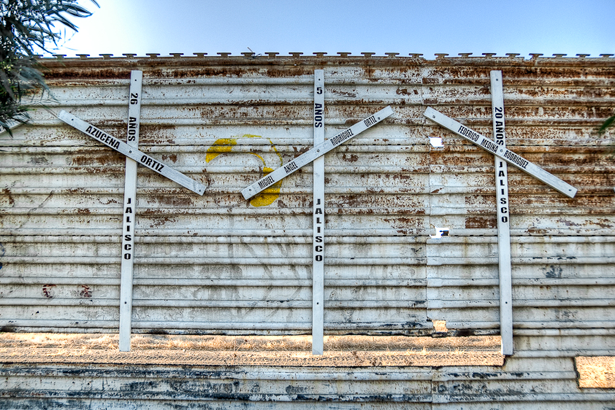 Community members cover the US/Mexico border wall with crosses bearing the names of the men, women and children who have died attempting to enter the United States. (Photo by Dave Brewer)

One year ago, after President Obama won re-election with overwhelming support from the Latino community, Republicans in Congress, led by Senator Marco Rubio, produced a “framework” for comprehensive immigration reform that would include a path to citizenship for at least some of the nation’s 11 million undocumented immigrants. Enlightened elements of the GOP seemed to belatedly recognize that the party could only expect further and more resounding defeats at the ballot box as long as it continued to impede Latinos struggling to find security and success in this country. “There are signs that the stars are aligning in favor of reform,” The Nation editorialized last February, “but we shouldn’t get ahead of ourselves. The real battle begins now.”

It is difficult to do battle, however, when the other side refuses to take the field. After months of promiscuous footsy—partnering with the bipartisan Gang of Eight to write a comprehensive bill before abruptly ceasing cooperation and embracing draconian, deal-killing enforcement mechanisms—last October Rubio gave up on serious reform entirely, calculating—quite wrongly, we suspect—that there was more electoral gain in soothing the Tea Party’s race anxieties than in pursuing true justice for millions of new Americans.

Speaker of the House of Representatives John Boehner has now made the same faulty calculation, announcing last week that he thought it was unlikely immigration reform could be passed by the end of 2014. The cowardly retreat by congressional Republicans from a long-overdue comprehensive immigration overhaul—coming just days after releasing a list of their “principles” for future legislation—only underscores the extent to which the GOP is fatally out-of-touch with the pulse and future of this country.

While the need for such legislation is unprecedented and the depths of Republican antipathy to immigrants never ceases to amaze, it’s worth recalling that on the issue of immigration as on much else there is little new under the sun. Ninety years ago, when another set of reactionary congressional Republicans were trying to pass a bill to restrict immigration—this time by further lowering quotas for Southern and Eastern European immigrants—The Nation published an editorial titled, “Land of the Noble Free.” The first line employed terminology now recognized as offensive, but the argument itself could easily have been written today:

Americans are all immigrants—all except the red Indians—and if the anthropologists be right, even they migrated from Asia. There is no American race; there is not even the established claim of centuries to plead the primary right of any one stock….Whence comes this myth that our country is the private property of some one racial stock? Whence come the arrogant assumptions of those who, like the chairman of the House Committee on Immigration, want to preserve a “racial homogeneity” which has never existed?…

It is a tragic thing that this country, built on the sweat and aspirations of immigrants, should so soon be fencing itself about with a wall. We are becoming the great example of national selfishness in all the world. While we bar human beings from our shores we bully weaker countries into granting American capital privileges alien to their national interests. We force Mexico to revise its oil laws, tell China how to use its customs, ask Russia to reconsider its view of private property, and everywhere claim the “open door”—for American capital—as an American policy. “Equal rights and opportunities, for capital, all over the world”—what a bitter slogan for America when a hungry peasant from South Italy, a persecuted Jew from Rumania, an Armenian whose home is a heap of ashes finds the door to America slammed in his face!

The Immigration Act of 1924 passed with overwhelming bipartisan support and was only superseded by the abolition of all immigration quotas in 1965. But as Boehner’s announcement made clear, its spirit remains very much alive. For a fuller history, see Strangers in Our Land, an e-book collection of The Nation’s writings on immigration going back to 1868, which will be published next month.