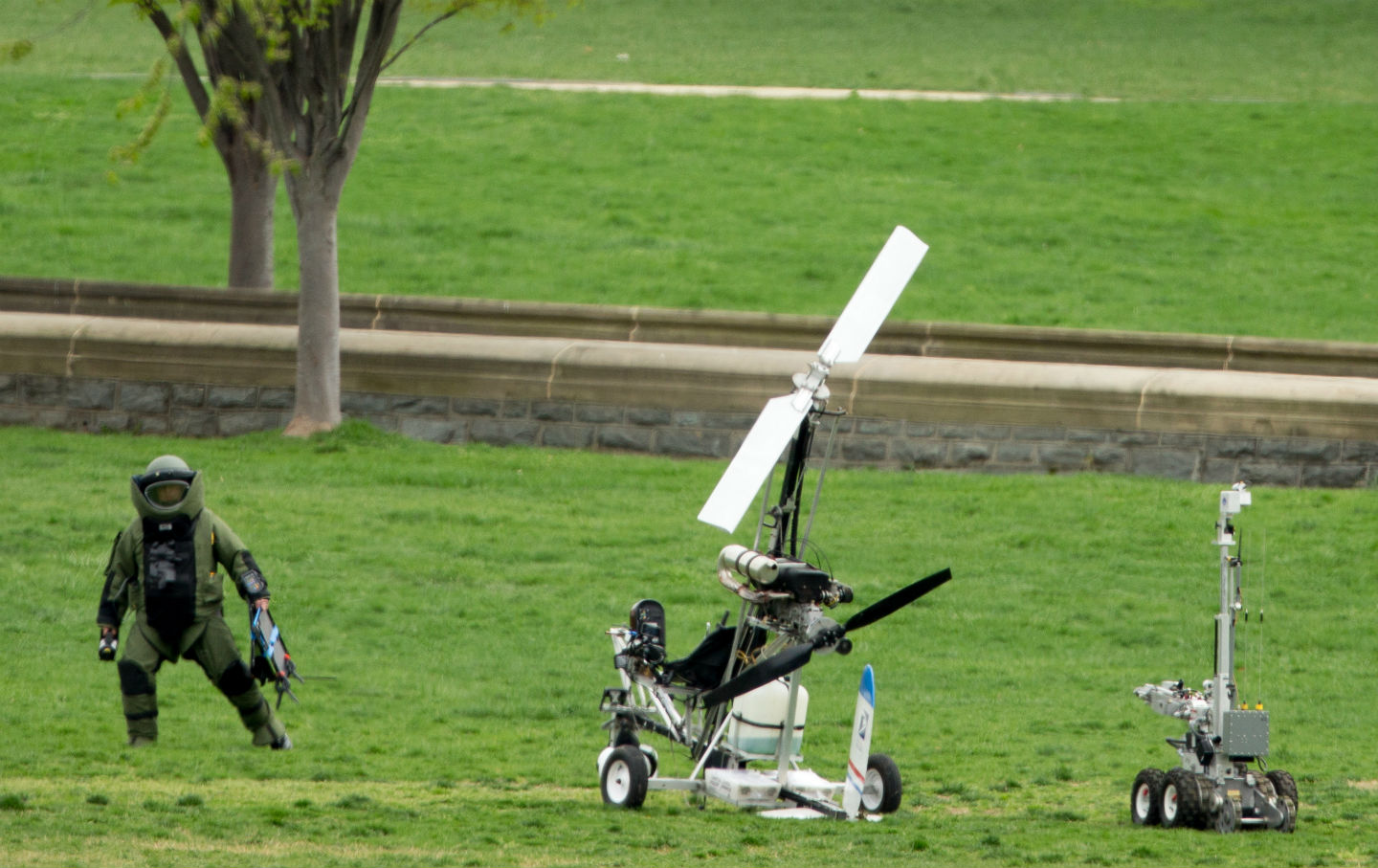 A member of a bomb squad approaches a gyrocopter after it landed on the West Lawn of the Capitol in Washington on April 15, 2015. (AP Photo/Andrew Harnik)

The US military machine spends around $600 billion a year on national defense, but somehow it couldn’t stop a Florida mailman from landing his airborne protest right on the Capitol lawn. Doug Hughes arrived in a slow-moving, light-weight gyrocopter that he flew right past all the elaborate checkpoints and high-tech security monitors. His message to members of Congress: you and your institution are utterly corrupted by political money and we, the people, are coming after you.

“I’m just delivering the mail,” the Florida postal worker said with a touch of whimsical humor. “This isn’t my regular route.”

The guardians of national security said they saw him coming on their radar screens but thought he was probably a flock of geese. Stand-up comics should have fun with that.

But I expect Hughes’s imaginative assault on politics-as-usual will scare the crap out of a lot of Washington politicians. They have spent trillions to deploy a mighty military and awesome weaponry to protect American citizens from hostile foreigners. But how do politicians protect themselves from the hostile American citizens?

Hughes is not a dangerous fruitcake. In fact, he is a small-d democratic idealist who went out of his way to alert the authorities in advance of his so-called “Freedom Flight.” He shared his plans online and with his local newspaper, the Tampa Bay Times, which wrote about his ambitions and kept police informed.

Hughes may be naïve (or even delusional), but he actually believes citizens can take back their government and drive off the monied interests that have captured congressional politics. “Because we the people own Congress,” says the website called The Democracy Club, where Hughes and others post their critiques. His arguments are rational and he addresses them not to ideological radicals but to “moderates united by faith in principles of democracy.”

A populist fever is rising in the land. That may scare off regular pols, but I have seen and heard from many other discontented citizens plowing similar furrows. I admire them. They are trying to rediscover how people act like citizens. They are conscientiously attempting various approaches. They often make common cause with more established thinker and activists, like legal scholar Laurence Lessig who founded “Rootstrikers” to battle the money influence and get at the roots of democratic decay.

Or Trevor Potter, former chair of the Federal Elections Commission, who is promoting a model reform measure, the American Anti-Corruption Act. Or Wolf PAC, which is pushing in many states to promote a constitutional amendment banning corporate money from elections.

The quality most of the home-grown reformers seem to share is deep skepticism toward both political parties. Democrats and Republicans have both adapted themselves to the necessities of big-money politics and neither shows much appetite for deep reform. Indeed, a potential convergence of left and right is probably more possible among rank-and-file voters at the grassroots. For all their angry differences, Tea Party adherents and working-class Dems share many of the same enemies and same frustrated yearnings.

Doug Hughes, for instance, is clearly on the liberal side of the spectrum, but many right-wing conservatives would be comfortable with his critique. The evidence of corruption, he argues, is obvious in the fact that nearly half of retired members of Congress are subsequently employed as lobbyists, that is, getting paid big salaries for voting right as senators or representatives. They are thus participating in “legalized, institutionalized bribery,” he charges.

Many right-wingers would also agree with Hughes about the complicity of the major media. “I think there’s an alliance between the national media and supporters of the corrupt status quo,” Hughes wrote. “That’s the political parties and the ad money they command and the election industry which runs 365 days a year. The national media is sold out.”

The risk in the rising populist temperament is that some people will take their anger to extremes and people will get hurt or worse. Doug Hughes may make sure that he is not inuring anyone with his gyrocopter antics, but the same techniques could be used to create bloodshed and mayhem—a domestic front for terrorism.

I suspect congressional leaders are pondering these possibilities right now and will take stronger security measures to protect senators and representatives and their staffs. The trouble is, fear-driven protections that is justified for public officials can amount to shrinking free expression and public space for angry citizens. History tells us that, once an ugly cycle of repression gets underway, it can feed a dangerous hostility between the governors and the governed.

Doug Hughes was arrested, as he expected he would be. But he said this would not dampen his enthusiasm for small-d democratic agitation. “I see this as my life’s work,” Hughes said beforehand, “assuming the flight doesn’t kill me and I don’t get a lengthy prison term.”