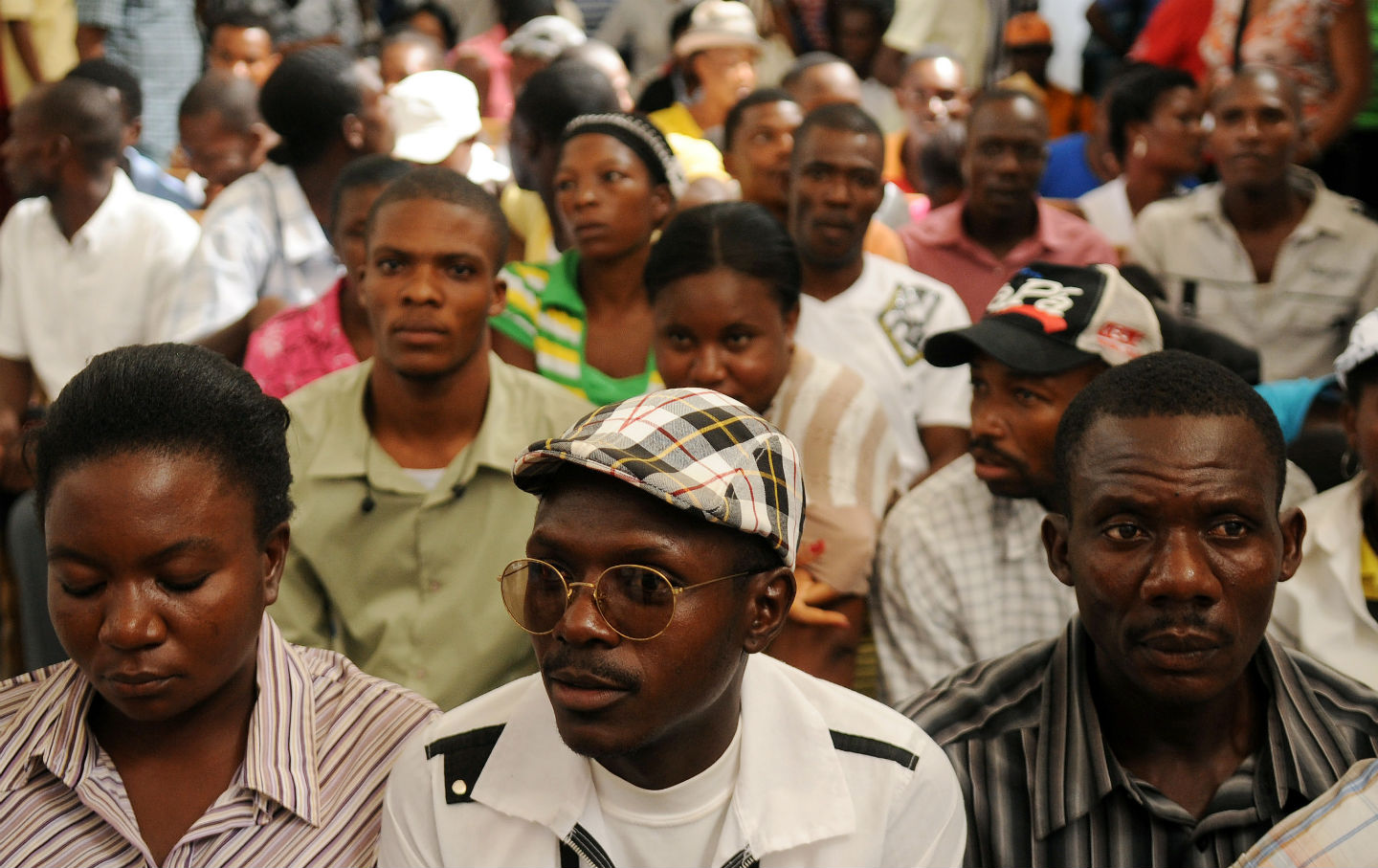 People born in the Dominican Republic to Haitian parents wait to receive copies of their personal documents in a special office created by the Haitian government. (Reuters/Ricardo Rojas)

Last week, I wrote that the Dominican Republic has summarily stripped over a hundred thousand Dominicans born in the DR of Haitian parents of their citizenship and is threatening to deport them to Haiti. And though initial reports suggested that the deadline for deportation might be delayed, it now seems to be going forward as planned: In four days, hundreds of thousands of people in the Western Hemisphere will become stateless.

Where is the US press? Why aren’t they covering it? And why the silence from human-rights groups? The main page of the Americas division of Human Rights Watch has three posts on Venezuela. Nothing on the Dominican Republic. HRW’s director Ken Roth is a prolific voice on Twitter—yet nothing on the topic since November 11, 2014 (but do a Twitter search for @KenRoth and Venezuela and bathe in the stream).

How many are vulnerable? The common reference is over 100,000. Rachel Nolan, who reported on the impending deportation in Harper’s, writes 210,000. I’ve also heard between 300,000 and 500,000. But who knows? And what will be the criteria to decide once the expulsions get underway and achieve self-propulsion? Already in poor neighborhoods they are sweeping up “dark-skinned Dominicans with Haitian facial features.”

The Dominican government has set up a number of centers where Dominicans of Haitian descent can try to “regularize” their status, and thus avoid being expelled. It’s a charade. The offices are overcrowded, understaffed, and the needed paperwork doesn’t exist (many Dominicans of Haitian descent were born in rural areas, since their parents came to work the sugar fields, with midwifes and not in hospitals, and were therefore never issued birth certificates).

An aid worker based in the poorer barrios of Santo Domingo and Puerto Plata (the two primary hubs of Haitian immigrants in the DR), who doesn’t want to be named, writes that three days ago, on June 9, local Dominican television media reported that the government solicited transportation companies for up to three dozen large passenger buses to be available on a rotating basis, with an implicit understanding that these would be used for pending deportation trips. “This,” he said, “is an extremely ominous sign.”

“Everything,” the aid worker says, “is set for the deportation and that the DR government is saying it is going forth on this Tuesday, June 16”:

As of the 17th, hundreds of thousands of Haitians and Dominican-Haitians here will be rendered stateless and eligible for summary detention and deportation. The Dominican government maintains that they will not delay implementation of the law, despite pressure from the US, the UN, the OAS, and the Pope.

The government also announced last week that they do not intend to deport those who have already registered for legalization. However, I am documenting dozens of personal accounts from Dominican-Haitians who have gone to great lengths to register, some as much as 8-9 months ago, and as of today have not received any type of confirmation that their paperwork has even been processed. Without confirmation, they are still eligible for deportation. This does not even consider the hundreds of thousands of others who lack birth certificates and thus could not register in the first place.

He also reports that in the barrios, police trucks have come through to conduct limpiezas (“cleanings,” with the adjective implied: “social cleanings”): “The detained tend to range from intoxicated persons to suspected prostitutes, but are disproportionately Haitian or dark-skinned Dominicans with Haitian facial features. These could just be guys drinking and playing dominos or women standing on street corners. More often, though, they tend to be young men with Haitian features and darker skin. The police usually—usually—detain them for a night and then let them go with a warning.” But, he says, this stepped-up activity is preparation for June 16:

Given the common practice of nightly police sweeps, the government solicitation of passenger buses, the official declaration of intent to pass Law 169-14 without delay on June 16, and the general history of anti-Haitian abuses on the part of law enforcement and government authorities, it is reasonable to assume that the infrastructure is now in place for mass detention and deportation of Haitians and Dominicans of Haitian descent from the Dominican Republic. The general attitude among this vulnerable subpopulation is a mix of fear and resignation.

This aid worker is asking for contacts in the US press; he wants to stay anonymous but wants to report on what he sees over the next week, especially in poorer neighborhoods, where he has contacts and first-hand experience. If you are a journalist and interested, e-mail me at grandin@nyu.edu and I’ll put you in touch.