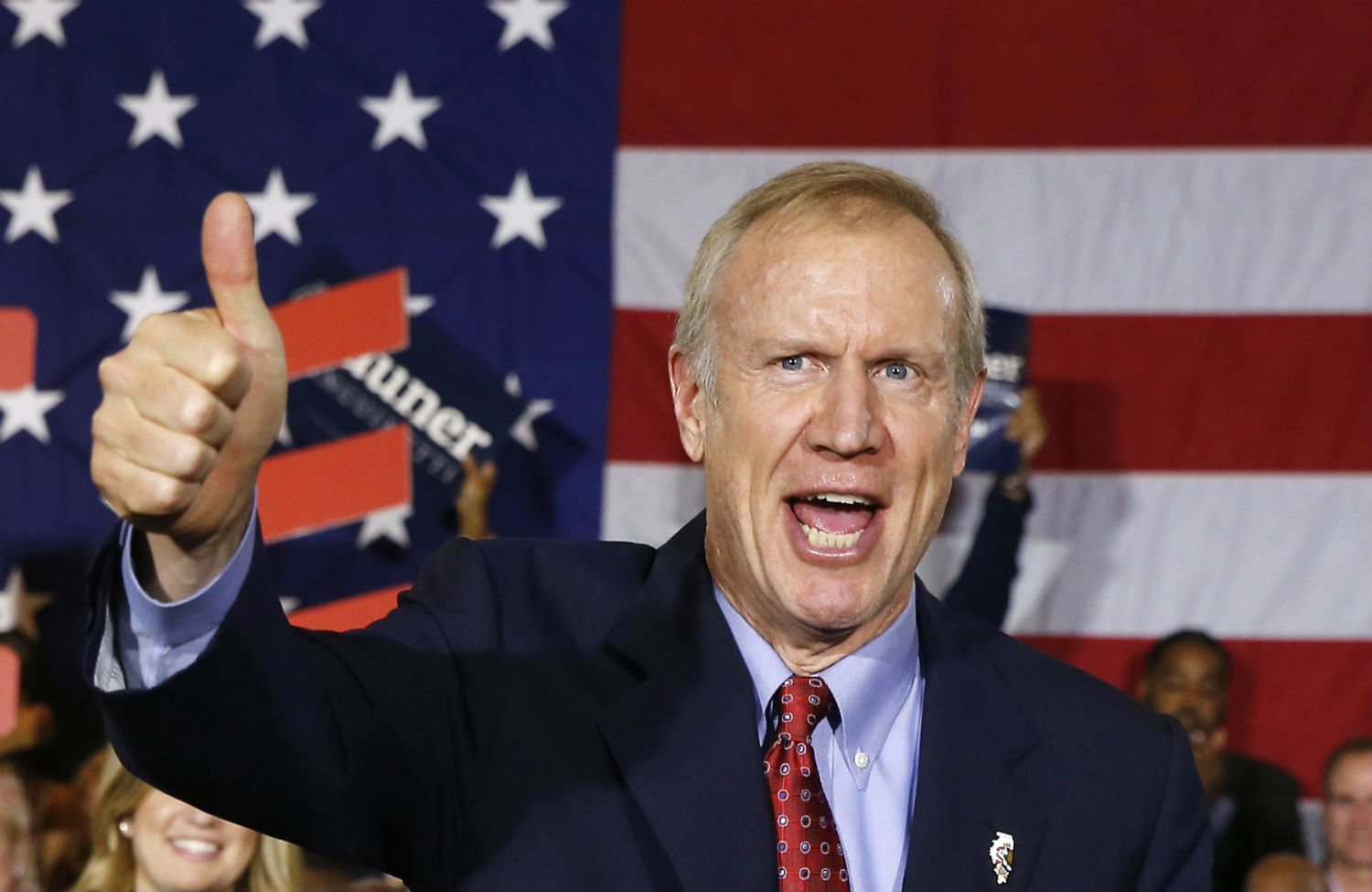 The new governor of Illinois, Bruce Rauner, is a hedge fund manager whose salary last year was $60 million. He spent $65.9 million—including $27.6 million of his own money—buying his last election, and he’s about to introduce an austerity program that will make most folks in Illinois think they are living in austerity-wracked Greece, with less idyllic weather. While he’s generating national headlines by trash talking unions, he is quietly taking a scalpel to every important social program in the state, starting with an Illinois program that subsidizes high-quality childcare for 160,000 low-income kids. Instead of extending a small tax increase that passed the Illinois legislature in 2011, staving off a crisis, he’s letting the increases expire. Rauner is methodically manufacturing an economic crisis for his state, one that will let him do what he has long been set on doing: shrink the government and squeeze the 99 percent.

Rauner’s latest executive order extends last summer’s Supreme Court ruling in Harris v. Quinn, which created right-to-work union rules for some public employees, homecare and childcare workers, to all public employees. Government workers in Illinois, and nationally, have long had the right to refuse union membership, and instead of full dues they pay a discounted 60 percent, known in labor parlance as an agency fee, in consideration of the representation and benefits they receive, along with members, from union protection and negotiation. What had been long-settled law on agency fees accepts that a worker might prefer to withhold the roughly 40 percent of dues that a union earmarks for political use. Harris v. Quinn undid this for homecare and childcare workers across the country, setting the stage for a national right-to-work law applying to government workers. Rauner’s order, effective immediately, states that the government will collect all the agency fees and deposit the money in an escrow account—achieving his object of starving union coffers before the courts can decide whether his action is legal, and perhaps before the next election cycle.

Rauner hopes to smash labor in Illinois so that he can take a baseball bat to it nationally. He has retained a high-powered legal team that is steering this case to the US Supreme Court and into the longing arms of Samuel Alito, who has already indicated his preference for the Rauner interpretation of Harris v. Quinn at the national level. Rauner’s cynicism was on full display in both his use of an executive order—the same weapon Obama has been deploying over the loud objections of the organized right wing—and in his choice of language, echoing Karl Marx’s description of workers as cogs in the wheel of capitalism by calling union dues “a critical cog in the corrupt bargain that is crushing taxpayers.”

Rauner is firmly entrenched in the corporate right wing of the Republican party. In an infamous video clip from the summer 2011 Aspen Institute of Ideas, Jonah Edelman, cofounder of Stand for Children, describes how Bruce Rauner suggested that they set up an office in Illinois with the explicit purpose of decimating the Chicago Teachers Union:

“When Bruce Rauner, a mutual friend…asked, after seeing we had passed legislation in several states, including Colorado, that we look to Illinois, I was skeptical, frankly. But after interviewing 55 different folks in the landscape, the speaker of the house, senate president, the minority leadership, education advocates…I was very surprised to see a tremendous political opening,”

The corporate right has a worldview, and, as Edelman’s speech demonstrates, it also has a power analysis from which all strategy flows. In the 1930s, the progressive movement’s analysis of power rested squarely on the faith that workers in large numbers—organized workers—could challenge unfettered corporate power and improve social conditions. And for many generations, through their unions, that is what they did. Now, progressives in and outside of unions have replaced power structure analysis with short-term tactical maneuvers that rely on something fashionably known as narrative change, done best through paid social media, devoid of vision and without the active participation of large numbers of workers. Worse still, despite our defeats in Wisconsin, our own movement continues to throw large numbers of women and African-Americans under the bus by characterizing public service workers as somehow different from, and of lesser importance than, the heroes of the twentieth century’s labor struggles, the largely white male labor force of heavy industry.

In Rich Yesselson’s widely read 2013 article in Democracy magazine, “Fortress Unionism,” the author calls on all progressives to circle the wagons in defense of what remains of today’s unions: “labor can, without undertaking lengthy and expensive campaigns to organize new workers, work to buttress the areas in which is it already strong, extend its alliances with other progressive groups, and even train the worker leaders of tomorrow.” Good idea! Then the bus rolls up as Yesselson continues, “I am speaking here only about private-sector unions, which face a deep crisis. Public-sector unions have their own well-known dilemmas, but require a completely different discussion.” In another recent piece, “Toward a New Solidarity,” he states that “the general public is the ‘employer’ that pays the wages and benefits of both the public sector union members and staff.” This is straight from the right-wing playbook, and it’s wrong. Given the bailouts of the auto industry, the gargantuan subsidies to pharmaceutical companies in the name of research, the public lands “we” donate to the cattle and mining industry, to name a few, “we” the general public pay a hefty chunk of the so-called private sector’s salary, too. What private sector? “Fortress Unionism” articulates very well why it’s so important to protect and defend what we have, and it offers some excellent ideas, but Yeselson’s analysis veers off the road when it separates the interests of labor’s public and private “sectors.”

This same logic appears in a buzz-getting 2014 book by Jake Rosenfeld called What Unions No Longer Do, but Rosenfeld replaces Yesselson’s bus with a steamroller. Echoing Ronald Reagan, Rosenfeld titles his second chapter “Government Is Not the Answer: Why Public Sector Unionism Won’t Rescue the Labor Movement.” Tell that to the mothers of the 160,000 kids in Illinois who are about to lose their access to childcare. Both Yesselson and Rosenfeld bemoan how few strikes take place these days, but the most massive strike in recent times, a strike that riveted America, that completely shut down production in a vital sector—education—was led in Illinois by mostly female teachers, who enjoyed unprecedented community support because they declared that their strike was about more than school workers and more than their wages. The strike was about defending the broad class interests of Chicago’s mostly black families. And they meant it.

Yes, the Taft Hartley Act did a lot of damage to the labor movement’s ability to engage in solidarity strikes, but in my last reading of the law, I didn’t find that unions must surrender all known forms of solidarity. In Illinois right now, many unions, public and private, have made the decision to endorse Mayor Rahm Emanuel. That self-destructive folly wasn’t legislated by Taft Hartley, nor was the selling out of the overwhelmingly female workforce who devote their lives to public service. Notably, among leftists and liberals, it’s men who take the “government unions don’t matter” position, and it is past time for men in the movement to take note that the economy has changed and that women-led professions are now the strategic professions. And it’s time we all sit up and, instead of writing books and articles saying that they are different, or that they matter less, we need to ask these unions how we can help them win.

From the 1970s through the 1990s, the corporate right gutted the power of the biggest organized labor force of that time: factory workers. It did this by creating global trade rules that put US labor in direct competition with workers in repressed countries who were earning $1 a day. Then it started a drumbeat about unionized workers in the United States being overpaid, and while national opinion was marshaled to the message, Rauner’s predecessors were wrecking the lives of millions of blue-collar families and their communities. Now the same right-wing drumbeat is rolling again, demonizing today’s most heavily unionized workforce, those overcompensated toilers—mostly women—doing public-service work. And now they’ve added a new riff: the fiction that these workers are overpaid at “our” expense, not a faceless corporation’s, not the Koch brothers subsidies, because “we” taxpayers are government workers’ real employers. But it’s only a riff, a marketing strategy. The right wing knows that in labor there are no “sectors.” Public or private, it’s the same struggle, about workers exercising their collective power and regulation.

There is only one economy. The false dichotomy of private and public sector is hardly recognized by Rauner’s crowd, the private equity investors and financiers who are really crushing the taxpayers, who suck up the nourishment meant for a whole society through the subsidies, contracts and all manner of fees they receive from government. The truth about “special interests” is that the government spends far, far less providing low-wage working mothers with childcare than it does providing the 1 percent with funds for its unimaginably lavish lifestyle. What private sector? What public sector?

We can reject the right’s message and foil its strategy by building a fortress for all workers in Illinois and across the country.