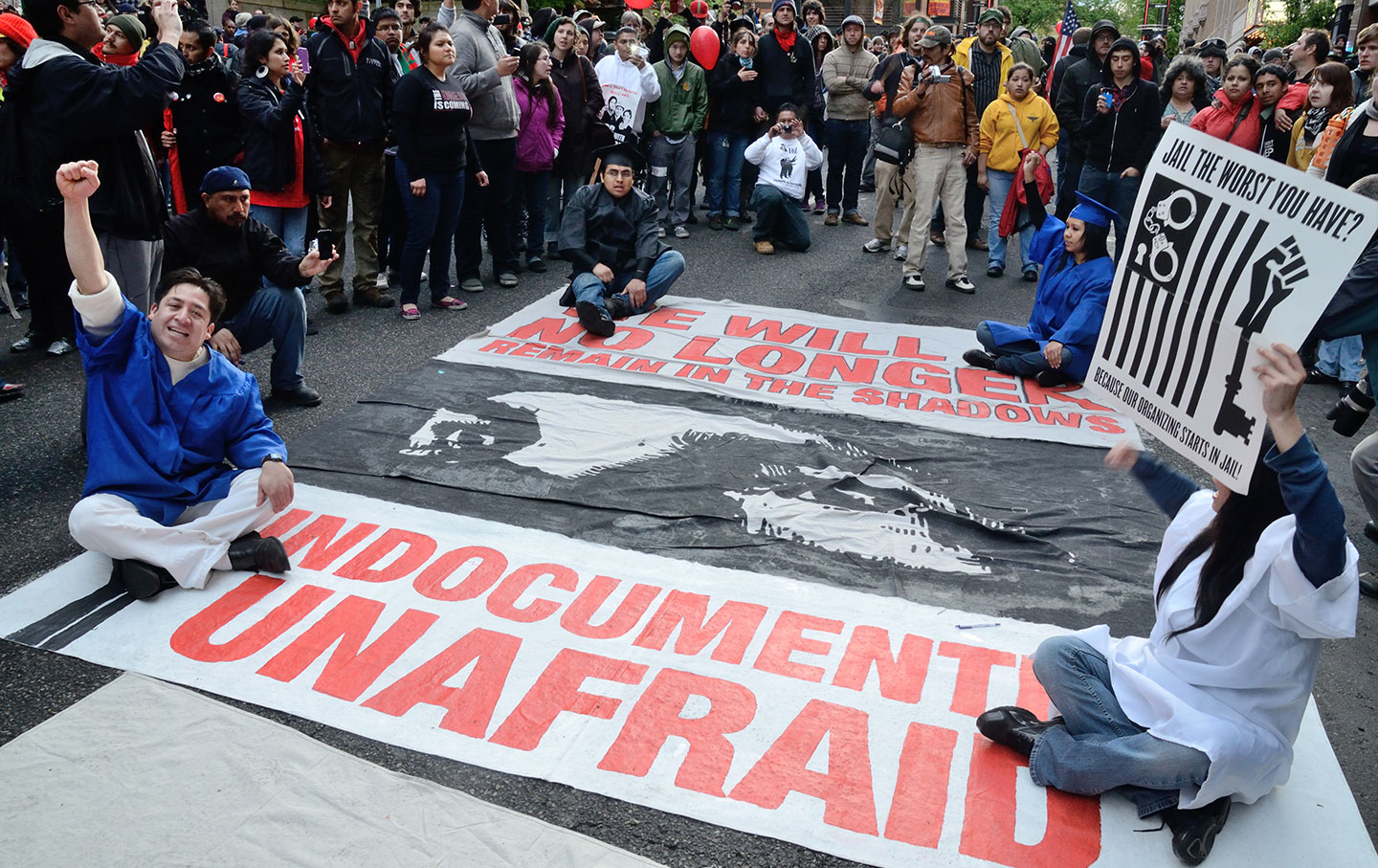 Undocumented activists protest in the streets of Portland, Oregon, on May Day 2012. (Paul Cone, CC BY-NC 2.0)

While President Trump has thus far taken no action to end the Deferred Action for Childhood Arrivals (DACA) program, he has already committed to building a $14 billion border wall and strip funding from sanctuary cities.

This news has brought anguish to thousands of young immigrants as they hold their breaths wondering whether their lives could dramatically change with the stroke of a pen. DACA has provided temporary deportation relief and work authorization to almost 800,000 young people. On an economic level, a study found that the United States would lose approximately $433.4 billion over a decade if the DACA program was eliminated. The housing market would lose millions, as Dreamers could lose their homes when many are no longer able to pay their mortgages after losing their work. States across the country could lose millions in tax revenue.

Fear and Fight in the Final Days of DACA

On a human level, many of these young people who have DACA, including myself, would again be relegated to the underground economy. Unquestionably, thousands of young people have called me with fear in their voice as they face an uncertain future.

So DACA is incredibly important, and it has changed lives for the better. Trust me, I know. If DACA ends, I can lose my drivers license, my home, perhaps even my law license.

Nevertheless, as we fight to keep the program, we can’t let Trump, Republicans, and Democrats pit us against each other nor force us to accept crumbs.

There are already discussions occurring in Washington on how to help the “good immigrants.” This can’t be the narrative that we settle on, as this oversimplified distinction has the danger of tearing families apart, criminalizing day laborers, accepting the solitary detention of LGBTQ immigrants, and closing the doors on refugee children escaping violence from Central America. Trump is continuing his aggressive actions against immigrant communities, including limiting immigration solely because of someone’s practicing Islam.

The ramifications of this good immigrant/bad immigrant narrative hasn’t gone unnoticed by those who want to increase attacks on the immigrant community. Mark Krikorian, executive director of the Center of Immigration Studies, an extremist, anti-immigrant group with influence in the Republican Party, has sought to trade relief for a sympathetic share of the undocumented population for an end to family migration and the visa lottery.

On the other side of the aisle, Democrats are, with good intentions but a misguided strategy, championing the BRIDGE Act, which would provide temporary relief from deportation and work authorization to undocumented youth, essentially DACA minus a path to citizenship. But if both parties, including a sympathetic Republican president, want to do something significant for the Dreamers, why settle for a sip of water when a gallon is right next to you?

Accepting the tragic reality that immigration reform for an undocumented population of 11 million people is not on the immediate horizon, this is still a time when we can introduce and pass a stand-alone bill that would provide a path to citizenship if a young person, arrived in the United States before they were 19 years old, has gone to school or served in the armed forces, and has a good moral character. While Republicans are being brazen with their new power over the three branches of government, Democrats continue to be timid in their policy demands. Progressive members of Congress can lead on this. Where is Senator Bernie Sanders? Where is Senator Elizabeth Warren?

Millions of people marched on Saturday to show Donald Trump that we will not tolerate attacks on human rights. Now it’s up to us to follow up with bold organizing and demands. Let’s remember that establishment politics lost the 2016 election.