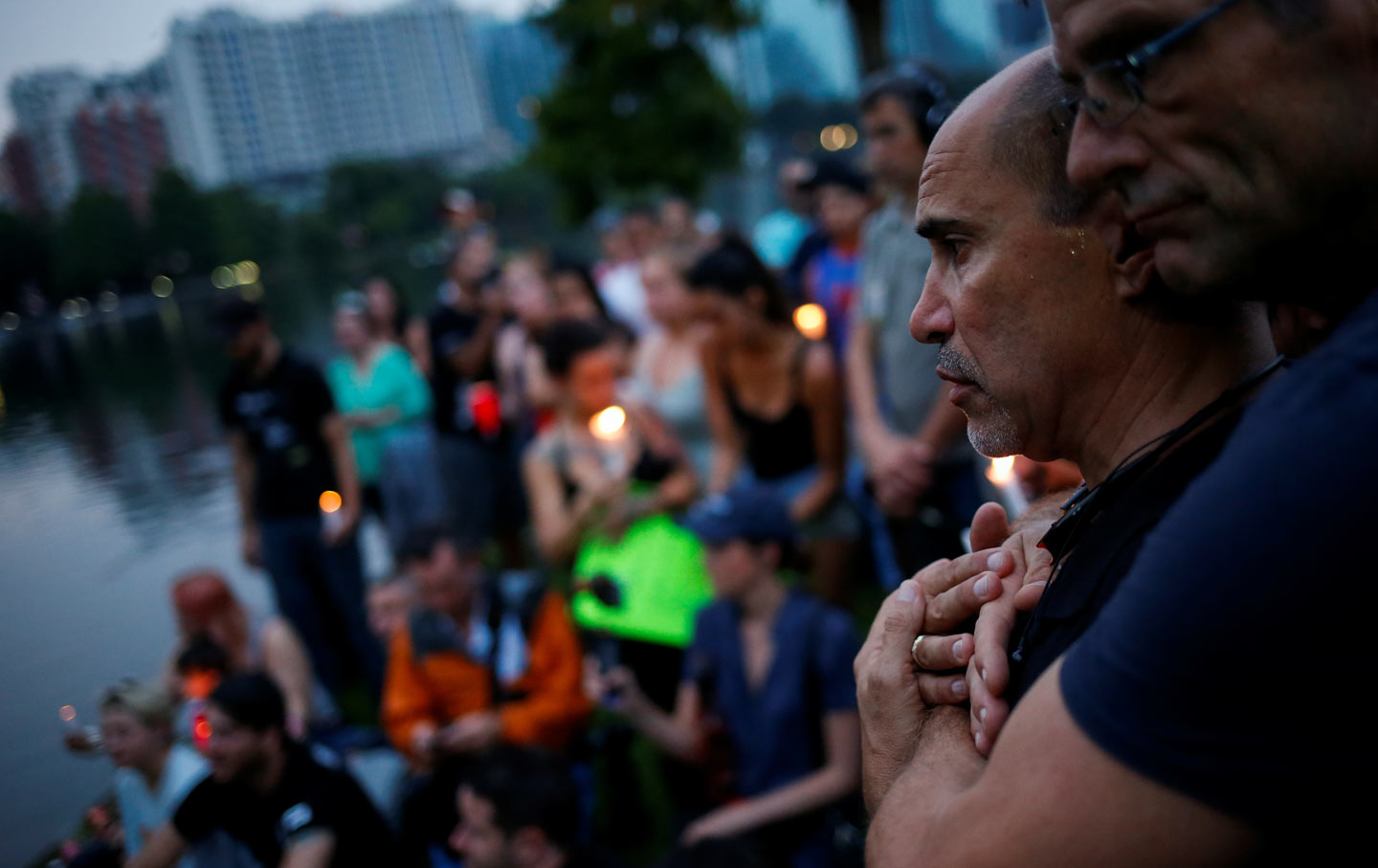 Wilfredo Perez, a local bartender at a gay bar, is embraced by his partner, Jackson Hollman, during a vigil to commemorate victims of a mass shooting at Pulse in Orlando, Florida, on June 12, 2016. (Reuters / Adrees Latif)

Blood is on my mind today. Forty-nine people: 49 bodies moving to the beat of the music, 49 hearts pulsing with joy on a dance floor. But the bullets, shot at high velocity from an assault weapon, put a stop to all that life, all that revelry.

This could have happened in any club in the United States on any Saturday night, but this was a gay club in Orlando on a Saturday night in June. Pride Month.

And this could have been any other mass shooting in America—there have been 126 this year alone—but the perpetrator was Omar Mateen, a security guard who, his father told news sources, became angered by the sight of two men kissing.

Every time I hear about a mass shooting, my mind reels with incomprehension. How is it still legal to buy an assault rifle in this country after Columbine, or Aurora, or Sandy Hook? The answer, I know, lies in the millions of dollars that so many of our representatives in Congress take from the National Rifle Association. That’s why we get thoughts and prayers after every mass shooting instead of gun legislation.

And we get speculation. If the shooter had access to mental healthcare, he might not have done it. If a good guy with a gun had been there, the bad guy might have been stopped.

But the attack in Orlando—where the shooter was Muslim and a security guard at the nightclub did have a gun—has shifted the script. Instead of speculation about guns or mental health, we get speculation about the shooter’s religion. If Mateen hadn’t been inspired by ISIS, he wouldn’t have done it. If his religion didn’t condone killing, he wouldn’t have done it. So much rides on a conditional clause.

Early on Sunday morning, an Indiana man by the name of James Howell was arrested in Santa Monica after residents called the police to report suspicious behavior. Howell told investigators that he was on his way to the gay-pride parade in West Hollywood. In the trunk of his car were three assault weapons and chemicals that can be used to make explosives. When I heard this news, I felt relieved for all the people who were able to march safely in West Hollywood. But I also wondered what would have happened if Howell hadn’t been caught. Would he have been called a terrorist, too, or just a crazed lone wolf?

Because Mateen told police that he’d pledged allegiance to ISIS, Islamic fundamentalism was initially considered to be his sole motivation. But it later emerged that he had a profile on a gay-dating app, that he was a regular visitor to the Pulse nightclub, and that when he was still in school, he had asked one of his male classmates on a date. Similar revelations about James Howell followed. An ex-boyfriend told authorities that Howell had struggled over their relationship and had pointed a gun at him. Whatever complicated mix of factors motivated both men, one thread ties them together: access to assault weapons. Eliminating bigotry, toward the self or toward the other, is a lifelong struggle that has to be fought on cultural, social, and religious grounds. But we must not lose sight of the fact that assault weapons can turn any bigot into a mass murderer.

What makes the Orlando attack especially painful is that it was aimed at a community that is already vulnerable. In spite of the political gains and cultural shifts of the last few years, LGBT people are still targeted. Under the guise of protecting religious freedoms, state lawmakers have introduced as many as 254 bills aimed at restricting the civil rights of LGBT people. Some of the most prominent of these have been the marriage-refusal bills, which became unconstitutional last year after the Supreme Court’s decision on same-sex marriage. But other bills have since been enacted, like the North Carolina law that bars transgender people from using public restrooms that match their gender identity. In Florida, where the shooting happened, sexual activity between people of the same sex was illegal until 2003, and in much of the state it’s still possible to fire someone or deny them housing because they identify as LGBT.

The shooter’s identity is also bringing unwelcome attention to a Muslim community that is equally vulnerable. From the talk of special IDs to an outright ban on Muslims, this has been our most difficult year since September 11, 2001. In the wake of the violent rhetoric from Republican presidential candidates, hate crimes against Muslims and attacks on mosques are on the rise again. Throughout all this, we’ve had allies in the progressive movement, including LGBT allies. That’s why it’s important for Muslim organizations, both civil and religious, to not only denounce the rhetoric aimed at them from the likes of Donald Trump, but also to work to end the discrimination and hatred directed at LGBT people. Justice is a fundamental tenet of Islam. We Muslims cannot demand respect for ourselves if we are willing to look the other way when LGBT people are targeted. Gay rights are civil rights, and civil rights are Muslim rights. And, of course, the two communities are not mutually exclusive; LGBT Muslims are the fabric that unites them. They mourn doubly today.

Omar Mateen left behind no manifesto, no indication of what he thought he might accomplish through the murder of innocents. He lashed out at people who are as vulnerable as members of his own community. The violence he unleashed might well create a fault line between people—a fault line that forces us to pick sides, to choose one tribe, to reject the others. But only if we let it. We can choose, instead, to strengthen our foundation.

A few hours after the identity of the shooter became known, Muslims in Florida donated blood to help those injured in the attack. I’ve been thinking about the blood that was spilled on Saturday night, and about the blood that was collected on Sunday. The blood of Muslim donors will course through the veins of gay victims. Because we are each other’s keeper.