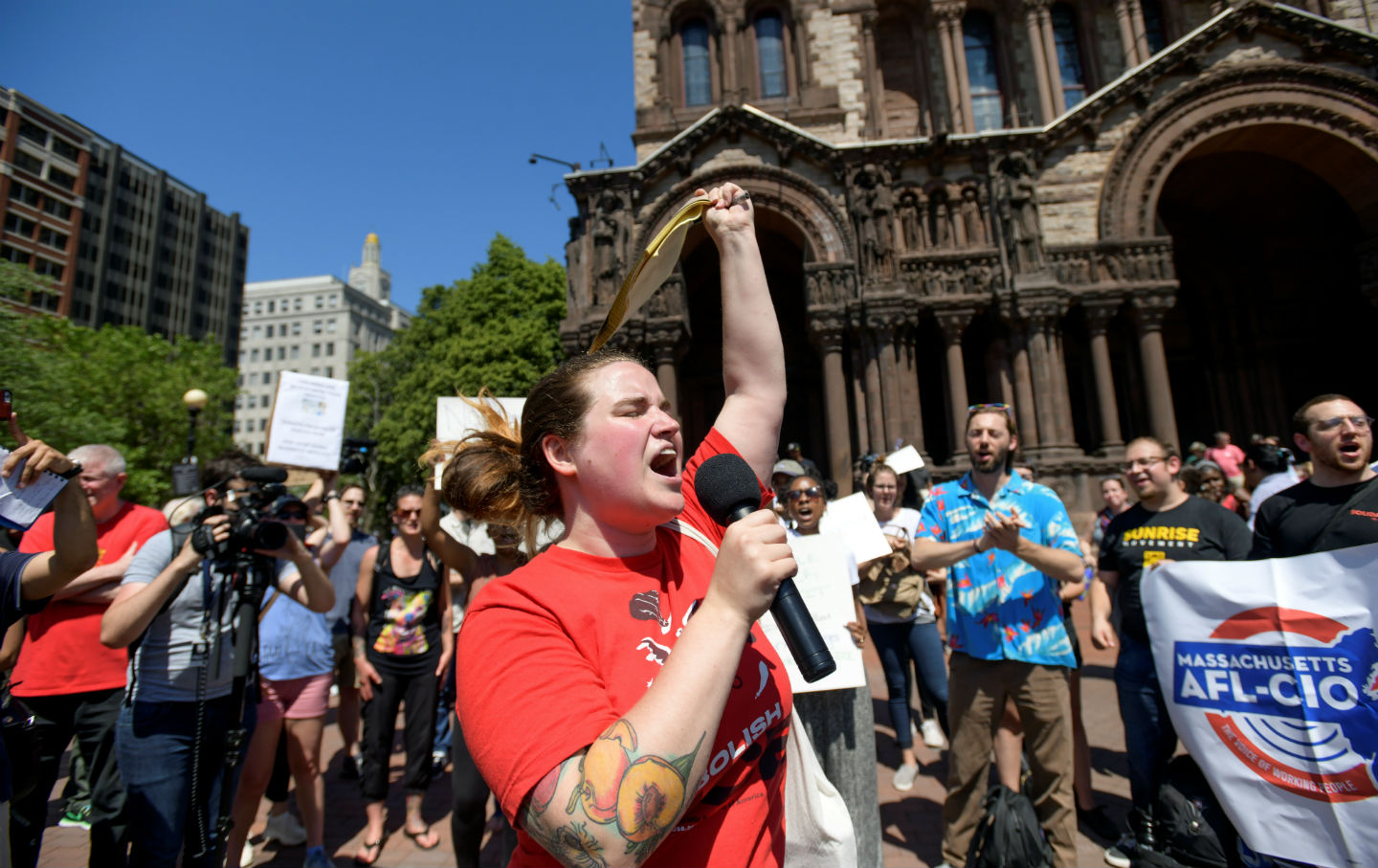 Some 3,000 people gathered on Boston’s Copley Square Wednesday afternoon in solidarity with hundreds of workers from the nearby Wayfair headquarters, who walked off the job in protest of their employer’s contract to furnish a detention center for migrant youth in Carillo Springs, Texas. Speakers and attendees of the demonstration included members of the Democratic Socialists of America, the Industrial Workers of the World, Boston Teachers Union, Jewish Voices for Peace, and the Elizabeth Warren’s presidential campaign, who braved a blasting mid-day sun to support the hour-long demonstration.

Workers who organized the walkout described their dismay at their employer’s business practices at the bullhorn: “This is the first time I’ve felt like I needed to hit the streets to make sure I was proud of my company…to make sure that we’re all adhering to those Wayfair values” explained Madeline Howard. “Like, everyone deserves a home that they love.” The wink to the company’s marketing tagline drew cheers.

The walkout had been called a mere day before, conceived as a pressure tactic to force management to capitulate to demands that the company cease its relationship with federal contractor BCFS, establish a code of ethics, and make a good-faith attempt to stop collaborating with other businesses complicit in migrant detention. (Organizers say these negotiations are ongoing.) In so doing, Wayfair workers demonstrated how labor actions can wield collective power to fight injustice outside of the workplace itself.

What if Workers Owned Their Workplaces?

In this case, Wayfair workers were spurred to act by reports of unimaginable cruelty at Border Patrol holding centers, where accounts of overcrowding, unsanitary conditions, and a lack of supplies and adequate child and health care led many to describe them as “concentration camps”—a label several Wayfair workers reported becoming a flashpoint in an internal meeting with management as signatories of the protest letter screamed back at their bosses. While there seems to be some conflation between agencies—the $200,000 worth of Wayfair beds were bound for a spillover shelter operated by the Department of Health and Human Services (HHS), not US Customs and Border Protection (CBP)—they were outfitting a facility that arguably wouldn’t exist in a human immigration system.

In this way, Wayfair was still part of a supply chain upholding the Trump administration’s cruel policy toward unauthorized migrants. By law, unaccompanied minors taken into Border Patrol custody are supposed to be transferred to accommodations under the Office of Refugee Resettlement (ORR) within 72 hours, where they stay until they can be released into the custody of a sponsor—usually a family member or friend already living in the United States.

Under the best circumstances, this system works imperfectly. For one thing, defining “unaccompanied minor” strictly as a child traveling without a parent needlessly separates children traveling with aunts, uncles or older siblings who would presumably make appropriate guardians. Moreover, ORR shelters have come under scrutiny for questionable detainment conditions, even if not on the order of those operated by CBP. But the Trump administration has severely impeded the system’s ability to function properly. As law professor Bill Hing, who represents detained migrant children, explained, undocumented sponsors are vetted more harshly and are less likely to cooperate with the ORR given the current political climate, causing a serious backlog. Even worse, the arbitrary practice last year of forcibly separating even those children who did travel with parents overwhelmed a system not designed to reunify them. The result is that more children are in HHS custody than ever, and stay for longer. This means overcrowded HHS shelters as well as Border Patrol facilities that can’t transfer children quickly enough—thus forcing the system to scramble for emergency spillover sites like the one outfitted with new beds from Wayfair.

Even if the HHS sites are vastly better than the now notorious CBP ones, Hing sees the Wayfair action as a crucial example of systemic resistance: “I think that facilitating more bed space is the wrong priority,” he explained, rejecting the argument that ramping up HHS accommodations is the best way to address the crisis. “I understand the need for more bed space to get children out of the hell we saw last week, out of the CBP hands, but that’s got to be coupled with simultaneously a policy that would reduce the need for bed space by expediting the sponsorship approvals, and also not arresting so many people in the first place.” 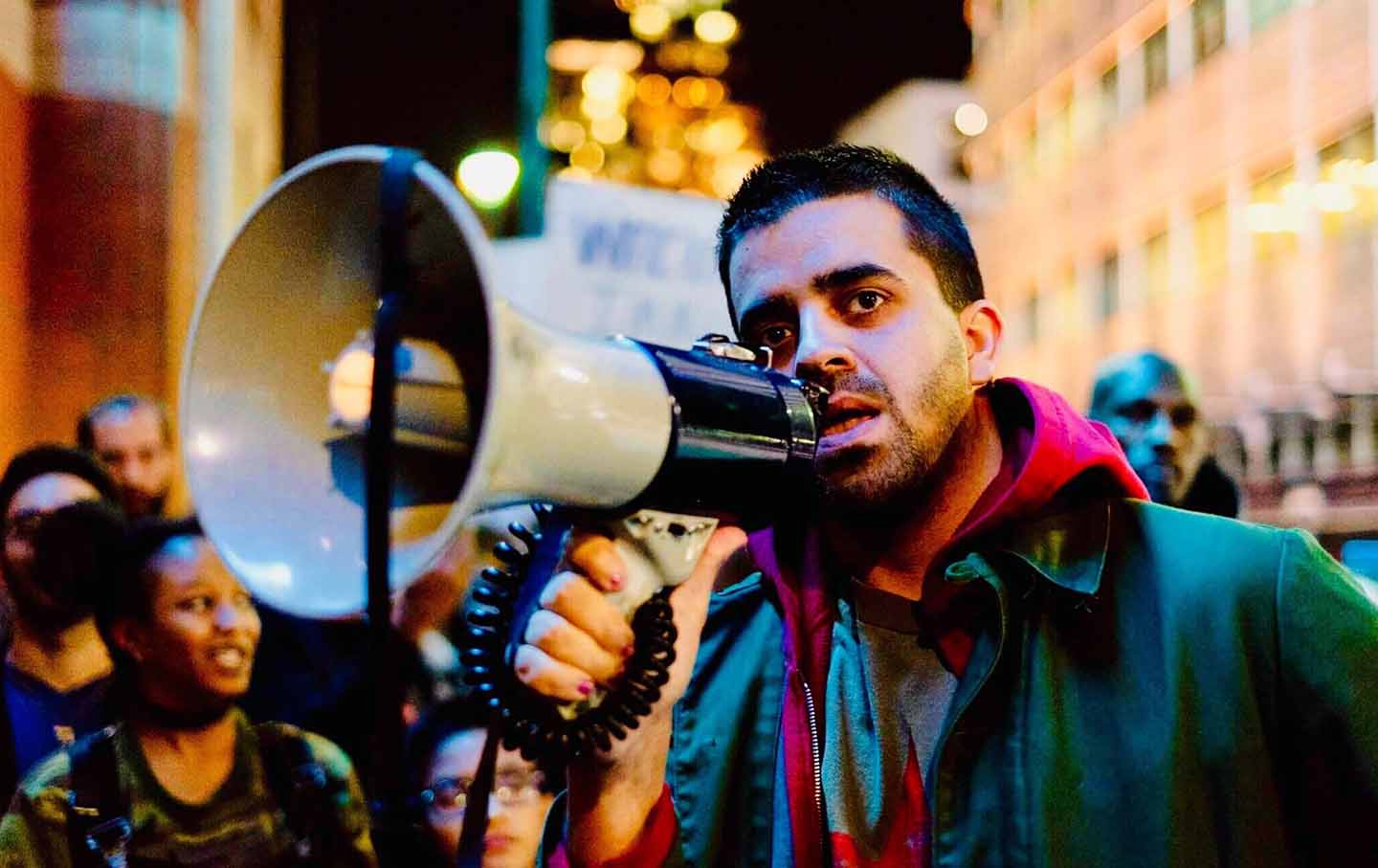 While people like Cecilia Muñoz, who oversaw unaccompanied minor policy in the Obama administration, may be distressed by the conflation of the HHS shelter network and the atrocities in CBP, she conceded that they’re systemically intertwined: “The bigger the shelter system has to get, the greater the likelihood of big problems,” Munoz told me by phone. “That would have been true anyway, even if it had been what it was supposed to be. But it’s infinitely worse because the administration has complicated matters dramatically.”

It remains unclear whether the Wayfair walkout will extract more concessions from management—their demand that the $86,000 in profits from the beds be donated to RAICES was met with a donation to the Red Cross instead—but the action is nonetheless an important example of how workers can organize for agency over not only their own compensation but also their employer’s unjust practices. As recounted in the work of historian Peter Cole, unionized longshoremen in the United States and Australia helped weaken apartheid by refusing to offload South African cargo. Last year, workers at Google protested their employer’s building a censorious search engine for use in China, and teachers in multiple states struck not only for raises but also for community gains like a reduction in charter schools.

All cases involve workers practicing collective power as political agents. For many at Wayfair, the walkout was their first time doing anything like this, but is unlikely to be the last. “I’ve never really coordinated or organized before.… I’ve never done too much besides voting—so this is new territory for me,” one Wayfair worker explained. “I’m hoping something comes out of this. Maybe that’s blind optimism on my part, but I wouldn’t be doing this otherwise.”