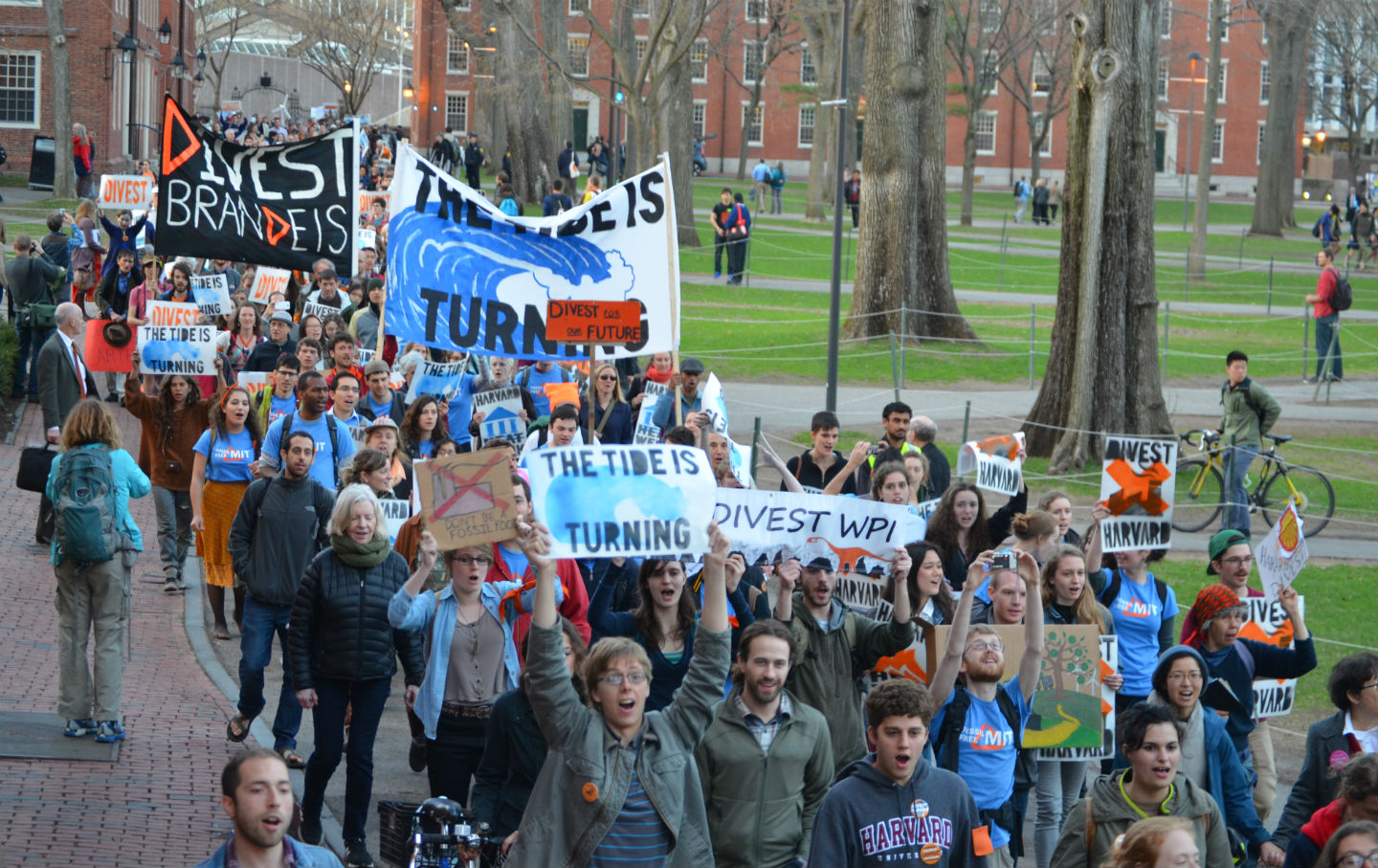 Movement leaders identify their goals as political, but they don’t see the movement as having the political power to achieve those goals. (350.org / CC BY 2.0)

The UN climate conference in Paris, COP21, is fast approaching in December. Coincidentally, last week the UK Met Office—Britain’s National Weather Service—declared that the planet will pass 1C warming by the end of the year, moving the world’s climate into “uncharted territory.” The US presidential primaries are in full swing with one party rife with climate change deniers. In this context, one question rises above all others: Does the climate movement have the political clout to save planet Earth?

As a youth climate activist and co-founder of Divest Harvard, I focused on this question for my senior thesis. I asked: How does the climate movement mobilize political power, and how effective have its political efforts been? After interviewing dozens of climate movement leaders, I identified what I call “the mobilization gap.” Movement leaders identify their goals as political, but they don’t see the movement as having the political power to achieve those goals. This dissonance has not yet been recognized—let alone addressed—but it jeopardizes the success of all our work.

One word lit up the climate movement last spring: kayaktivist. The Obama administration had just granted Royal Dutch Shell permission to drill for oil off Alaska’s shore. In May, hundreds of people took to the water in protest and kayaked across Seattle’s Elliott Bay. Their message: “sHell No.” In June, kayaktivists blocked one of Shell’s Arctic-bound drilling rigs in Seattle. In July, 13 Greenpeace protesters hung off a bridge in Portland, Oregon, to stop another Shell rig from departing. Kayaktivists supported from the water below, making national headlines. Organizations like 350.org, NRDC and CREDO issued statements and petitions, protesting Obama’s decisions to allow Arctic drilling.

Then in September, Obama became the first sitting president to visit Alaska. His goal: to confront the human and environmental impacts of the climate crisis. Staring forlornly at a rapidly vanishing glacier, Obama spoke with a reporter from Rolling Stone. In his interview, he appeared to be resigned to a status quo that remains frozen despite the melting mountains of ice. For example, when asked about his approval of Arctic drilling, Obama claimed that he couldn’t stop Shell, lamenting that, “regardless of how urgent I think the science is, if I howl at the moon without being able to build a political consensus behind me, it’s not going to get done.” His rhetoric reflects a political climate in which the work of the kayaktivists and those of other broad-based organizations opposed to Arctic drilling are considered futile idealism—the political equivalent of howling at the moon. The movement has yet to provide Obama with the cover needed to reject Arctic drilling as a matter of political necessity. When the Obama administration did suspend auctions for two offshore drilling leases in October, the low price of oil and lack of competitive bidding were cited as reasons—not political or existential requirement.

After four years of organizing, the climate movement celebrated a huge victory on November 6 as President Obama, Vice President Biden, and Secretary of State Kerry rejected the Keystone XL pipeline. After the announcement, movement writers penned titles like “The People Rejected Keystone XL,” “When We Fight, We Fuck Shit Up: Keystone XL and Delegitimizing Fossil Fuels,” and “#NoKXL: The Day the People Won.” The common message was that the movement’s resistance elevated Keystone XL as an issue and built effective political power.

But there was one person who wasn’t as enthusiastic about the people’s fight against Keystone XL: President Obama. He accused the climate movement of using the pipeline as a “campaign cudgel,” countering that it would not be the “express lane to climate disaster” that opponents claimed. He cited national security, climate change, cultural heritage, and America’s credibility as a climate leader as the reasons why Keystone XL had to die. But he neither credited the movement nor the massive uprising that brought Keystone XL to the forefront of national and global politics.

There is no denying the significance of the Keystone XL decision and what it means for fossil fuel–infrastructure resistance in the United States. The movement deserves its much-celebrated backstage credit for this success. But we still need to recognize that the Obama administration’s rhetoric points to a deep reluctance to credit a growing grassroots movement. Our movement still needs the kind of political power that compels public legitimation and recognition. How is it that all of Washington is terrified of the NRA, but Congress still debates whether climate change is caused by humans? The climate movement must create an inescapable riptide of political necessity that redefines acceptable political action.

The failure to build political necessity at the local and national levels cripples our ability to meet the world-historic challenges of international coordination around climate action. The 21st UN Framework Convention on Climate Change Conference of the Parties (COP21) is about to commence in Paris, France. It represents one of humanity’s last opportunities to develop a legally binding agreement for global emissions reduction. Hundreds of thousands are expected to mobilize in the streets of Paris. A planet-wide march will occur on November 28 and 29. The largest-ever European civil disobedience for climate change will take place in Paris on December 12—the last official day of COP.

Yet it looks like no treaty will emerge from Paris. Kerry has already said that there will “definitely not” be a binding agreement. Christiana Figueres, the UN climate chief and highest-ranking climate-change expert in the UN, warned that any agreement in Paris would not include a global price on carbon. Political systems fail to act on climate despite the urgent pleas of scientists and unprecedented global grassroots activism. The lack of political clout on the local and national levels are only magnified at history-making moments like COP21.

These three examples illustrate the mobilization gap. We need politics to address climate change, but political systems are unprepared for this crisis. A movement builds power for political ends without being able to achieve the policies needed to address a fast dawning catastrophe.

How do we close the mobilization gap? How can we create a political system in which acting on climate is common sense not uncommon idealism, political necessity not political risk? My experiences as a youth activist and my thesis research have driven me to explore new solutions for building an unstoppable political force for climate action. During the next year, I will be a Fellow with The Nation. I’ll be writing a book on this topic and exploring answers to these questions in an ongoing series of articles in this space.

It’s my generation and those on the front lines of the climate crisis who will pay the price if the climate mobilization gap remains unaddressed. That is why we will always howl at the moon.