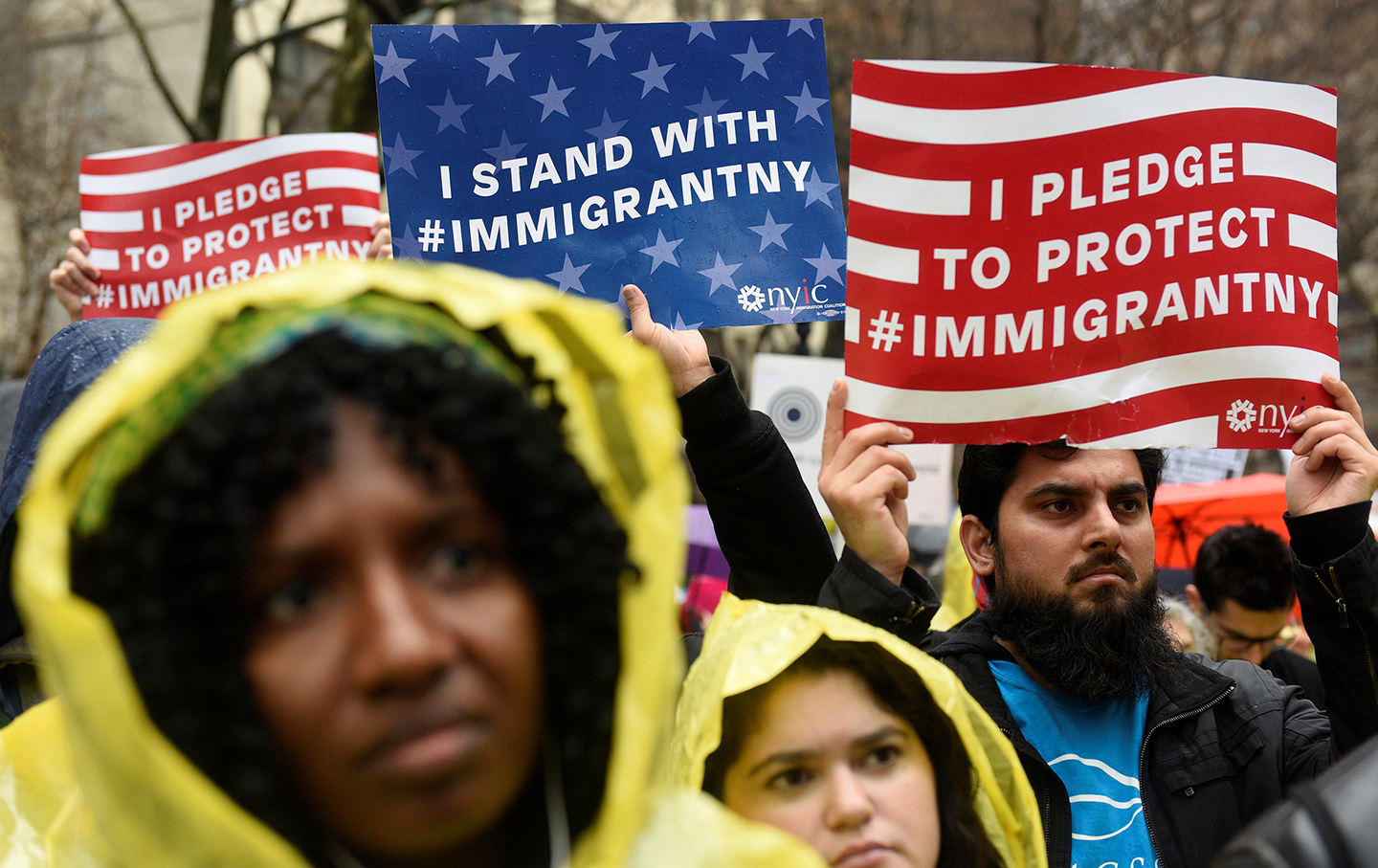 People hold up signs before marching to Trump Tower during a protest organized by the New York Immigration Coalition against President Trump in New York City, December 18, 2016. (Reuters / Darren Ornitz)

Week one: The new White House seems, with the stroke of a pen, to have turned every immigrant’s worst fears into reality. Trump has kick-started the construction of his long-promised border wall, and expanded “domestic” security by resurrecting previous policies that Obama had tamped down. His executive orders promise to triple staffing of federal immigration authorities while pressuring local officials to help Washington arrest and deport millions. He threatens to slash funding for cities that refuse compliance with federal enforcement actions, while demonizing immigrants through publicly reporting criminal allegations against noncitizens—flouting due process in a crude shaming ritual.

But is the president above the Constitution? While Trump revels in playing sheriff on his social media–fueled crusade, whether his war on immigrants turns out to be more spectacle than reality remains an open question, as long as grassroots activists refuse to let the Trump train derail their fight for justice.

On the ground, the way the government uses and abuses the law when dealing with immigrants is determined by how seriously people are willing to comply, or to resist on the community level.

Trump’s impending crackdown centers on collaborating with localities to arrest, detain, and deport undocumented immigrants, particularly through reviving and expanding 287(g), a program that enables the deputization of local police officers as immigration agents. Although participation in such programs is largely voluntary, advocates fear that under Trump the most anti-immigrant jurisdictions will be spurred to sign on and encouraged to engage in mass civil-rights violations with Washington’s backing. Under the new executive action, Keane notes, “this lack of prioritization at the federal level really incentivizes the racial profiling…in the community. And it essentially sends a message to local law enforcement and local leaders that by arresting someone on whatever trumped up charge they can come up with…now ICE is basically signaling that they’ll pursue enforcement against anyone,” regardless of whether there’s ultimately a conviction.

If there is a full-scale reversion back to the Bush-era program known as Secure Communities, advocates anticipate expanded information sharing of local criminal records with key federal immigration databases. In this atmosphere of precriminalization, advocates worry the federal initiatives will encourage rights violations in anti-immigrant jurisdictions, like Maricopa County, Arizona—where Trump has praised the notoriously brutal enforcement model.

Trump is reportedly also working with policy experts known to oppose birthright citizenship—a core principle enshrined in the Fourteenth Amendment. (This is the backbone of black emancipation and the cornerstone of citizenship for every child born to immigrants on US soil.)

Moreover, his recently announced federal hiring freeze could curtail other resources that help safeguard due process and access to justice for vulnerable communities.

University of Denver law professor César Cuauhtémoc García Hernández tells The Guardian that even the most basic avenue for due process, the immigration courts, could become further strained. “If we’re not going to be hiring more immigration judges…that backlog is going to expand and make for a very frustrating experience for folks regardless of what their political perspectives are. Those courts might very well come to a halt.”

Activists foresee a legal climate skewed toward “law and order” at the expense of civil rights. But that doesn’t mean communities aren’t driving to halt Trump’s policies by any means necessary. To counter his media war on the digital front, legal advocacy groups just launched immi.org, an outreach tool designed by the legal collaborative Immigration Advocates Network to strengthen access to online services for immigrants facing deportation. The platform acts as a streamlined digital switchboard that helps connect immigrants with quality legal assistance, says coordinator Matthew Burnett. Groups will eventually aim to “do online intake…and connect directly with users who opt-in to their services, which will be automated based on the nonprofit’s capacity and expertise.” This allows individuals to avoid fraudulent “notarios” and access emergency specialized legal aid, which is perhaps one of the most important factors in improving one’s chances of resisting a deportation order. Burnett notes that such platforms could help “bring both access to immigrants and nonprofit services to scale, which is ultimately the answer to increasing impact.”

While technological platforms provide some protection, grassroots activists are linking social-media organizing with street protest to strengthen sanctuary policies and to demand justice for all marginalized communities. In Chicago, the Black Youth Project, Mijente, and Organized Communities Against Deportation have fused two critical social justice struggles against racist and anti-immigrant brutality. They call for “real sanctuary” across all arenas of law enforcement.

“Sanctuary in Chicago today means a commitment not just to symbolically defy Trump but to actually transform our city’s policies to stop targeting us for imprisonment, risk of removal, and state violence at the hands of police and aggressive immigration agents.” Mijente stated at a media conference this week.

Elsewhere, local resistance seems more resurgent than intimidated. While Miami-Dade County has announced it will follow Trump’s directives, many other cities have redoubled their commitment to defying federal orders at all costs.

Immigrants’ legal futures will be determined not by who is in the White House but by how communities act under pressure, to stand up for their families and neighbors. Decades of federal case law and constitutional precedents lay out a legal infrastructure for resistance. But it’s up to responsible local officials, compassionate advocates, and a politically conscious, emboldened public to know their rights and collectively defend them.

In this surreal political moment, millions of the most disenfranchised Americans are finding power in unexpected places. While the administration might act like it’s above the law, its targets understand that not only is the law on their side, but history is, too.