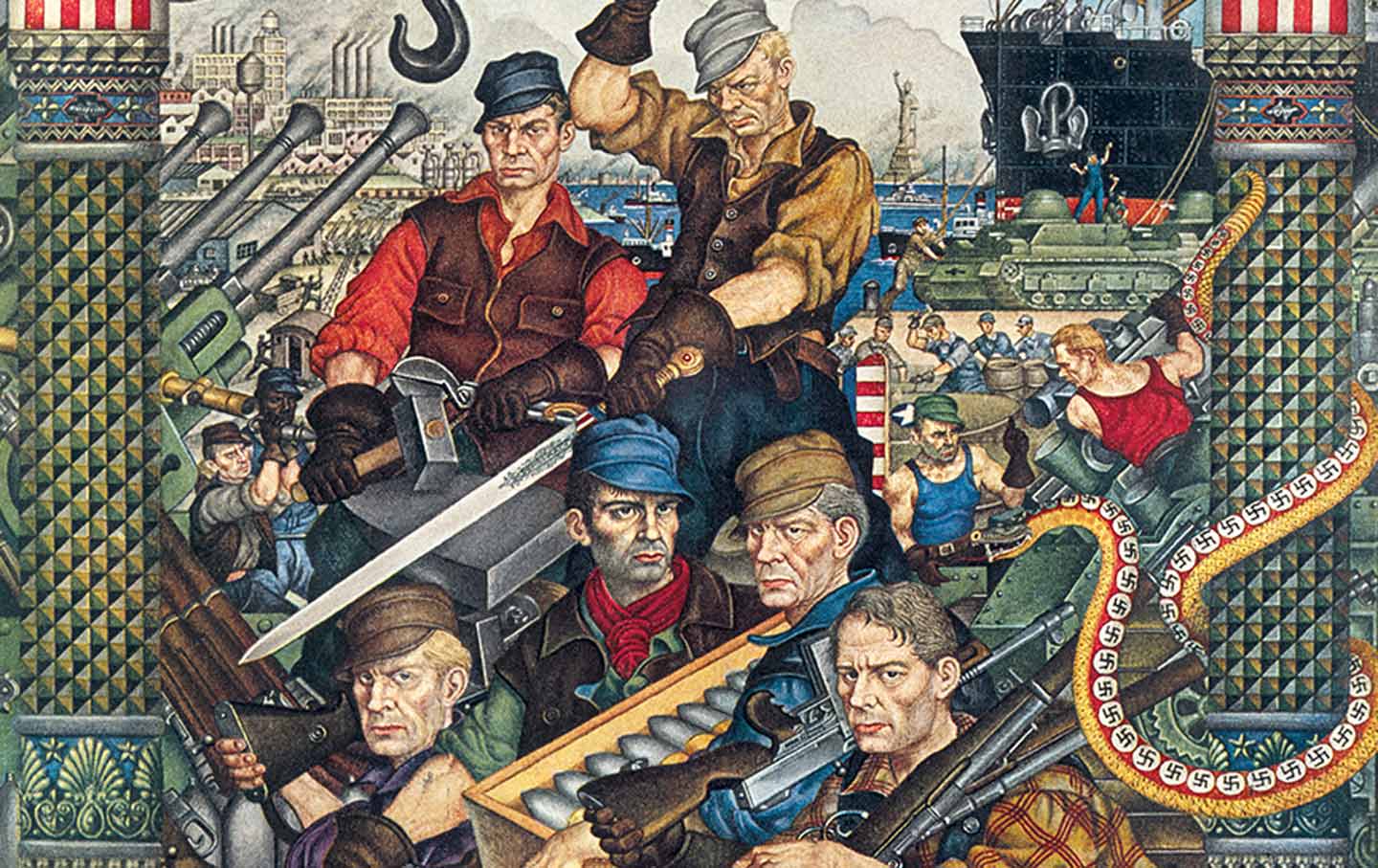 Detail of Arthur Szyk’s Arsenal of Democracy, the cover of the September 12, 1942, issue of Collier’s. (Arthur Szyk)

“In its way [Arthur Szyk’s work] fights the war against Hitlerism as truly as any of us who cannot actually be on the fighting fronts today.”
—First lady Eleanor Roosevelt, My Day column, January 8, 1943

Seventy-five years ago this January, President Franklin Roosevelt stood before Congress to deliver his eighth State of the Union address. Nearly a year before America’s entry into World War II, Roosevelt explained to the American people his decision to supply arms and material to the Allied war effort against the expansionist Axis powers. The president well knew that the American public, still recovering from the devastation of the Great Depression and the Great War before it, had no appetite for a “foreign” war. Building on his fireside chat the week before, Roosevelt argued persuasively that the battles raging on three continents posed an existential peril not just to the United States but to democracy itself.

With its new blitzkrieg tactics, Nazi Germany had decisively defeated Poland, Denmark, Norway, Belgium, the Netherlands, Luxembourg, and France in less than a year. Fascist Italy had invaded Albania and Greece, and mounted offensives throughout North and East Africa. Having already occupied much of eastern China, Imperial Japan had recently invaded French Indochina, while the Soviet Union had grabbed the Baltic States and portions of Finland and Romania. Now Great Britain, under relentless attack by Germany’s Luftwaffe by air and U-boats at sea, was the last democracy actively resisting the Axis bid for world domination. Should Britain fall, the United States would be nearly friendless on the world stage and hard-pressed to repel an invasion of our own hemisphere or negotiate an equitable peace. As Roosevelt saw it, America had the moral obligation to challenge the aggressors and uphold for all humanity—before it was too late—the essential “Four Freedoms”: freedom of speech; freedom of worship; freedom from want; and freedom from fear.

Broadcast live by radio to millions of American homes, Roosevelt’s Four Freedoms were inspiring in their own right. However, it was the nation’s authors, film directors, and visual artists who would expand a brief sound bite into a compelling vision worth fighting and dying for. Two popular artists in particular, Norman Rockwell and Arthur Szyk (pronounced “Shik”), took the lead in presenting Roosevelt’s democratic worldview to the American public. Their individual styles and approaches couldn’t have been more different: Rockwell’s large-scale, realistic oil paintings tended to highlight the everyday heroism of the home front, while Szyk’s stylized watercolor miniatures and drawings presented the life-or-death struggle against global tyranny on the actual battlefield. Though both approaches were valid and effective, it was Szyk’s anti-Fascist images that told the full story of Roosevelt’s “arsenal of democracy,” deftly illustrating the righteousness and urgency of the Allied cause.

Contrast, for instance, Rockwell’s rightfully iconic Rosie the Riveter (the cover of The Saturday Evening Post’s May 29, 1943, issue) with Szyk’s Arsenal of Democracy  (the cover of the September 12, 1942, issue of Collier’s). Both patriotic works show the hardworking people behind the manufacture of American arms and armament, but from vastly different perspectives. Before the backdrop of a huge American flag, Rockwell’s everywoman Rosie—a heartening symbol of American ingenuity and grit—pauses for her lunch break. The tangible results of her work are conspicuously absent; the enemy, too, is invisible, save for a copy of Hitler’s Mein Kampf under Rosie’s boots. Szyk’s painstakingly detailed panorama paints a less personal but more holistic portrait of the aims and means of the American war machine. Ships, tanks, planes, guns, and artillery fill the land, air, and sea to the horizon and beyond. In the foreground, a swastika-emblazoned snake menaces a group of somber workers who gaze directly at the viewer, silently asking: “And what are you contributing to the war effort?”

With his cinematic, idealized images of wartime, Rockwell sought to inspire with the best of humanity; any negativity or hint of mortality are entirely offstage. Judging by their earnest faces, his all-American heroes (and they are always American) confidently believe that all is well and that good will unquestionably prevail. In contrast, Szyk’s highly stylized caricatures made no such assurances about America’s security or ultimate victory over evil. His visual interpretations of the hate-filled, homicidal policies of Hitler, Hirohito, and Mussolini were designed to disturb and disgust; Hitler in particular was made out to be the Antichrist, a consort of Satan (and Death), or at the very least, a Wagner-esque madman drunk on Blut und Eisen. Szyk’s heroic portrayals of Allied troops —British, French, Chinese, and, later, even Soviet—celebrated the national and cultural diversity of what he saw to be a necessarily global cause against totalitarianism. Above all, Szyk painted the war to remind the public that the aggressors terrorizing the free world were not bogeymen but humans. Humans, susceptible to derision and scorn—and, more important, to bullets and bombs made and fired by those with the courage to stand on the right side of history.

A Polish-Jewish artist well-known in Europe, Szyk immigrated to New York in late 1940—at the specific request of the British government and the Polish-government-in-exile—to raise awareness and support of the war in Europe in the Western Hemisphere. Drawing on his propaganda experience in the Polish-Soviet war, Szyk launched into action, determined to shake America from its isolationist stance. He set aside his work in fine art and illustration to dedicate himself full-time to the production, exhibition, and mass distribution of his so-called “war cartoons” (in actuality, exquisitely detailed finished works). The personal stakes were high: Szyk had vehemently opposed Hitler and his racist, militaristic government since 1933. From his hometown of Łódź, Poland, and later, from London, the artist saw Germany morph into the de facto dictatorship that passed the anti-Semitic Nuremberg laws, engineered the violence of Kristallnacht, and invaded his homeland of Poland—a slow-motion catastrophe for the Jewish people, with no end in sight. Though he had every hope that Britain would prevail, Szyk believed that, as the world’s last remaining superpower, the United States represented the world’s best last hope for defeating Nazism.

Roosevelt’s Four Freedoms speech, delivered three months after Szyk arrived in the country, only encouraged the artist’s efforts. The European immigrant-cum-refugee did not need to imagine a world without these freedoms: the Axis powers’ new world order had already abolished them. Speech: Hitler reportedly put a price on Szyk’s head after seeing his political art. Worship: As a Jew, Szyk was by definition an enemy of the Nazi state. Want: Szyk’s family experienced food rationing during their exile in Britain. Fear: His beloved Poland had been invaded, his friends and relatives at the mercy of hostile occupiers. More than any other political artist of the era, Szyk understood precisely what America had to lose in this war.

Hitler reportedly put a price on Szyk’s head after seeing his political art.

So Szyk went to work in his self-appointed capacity as “FDR’s soldier in art,” a fighting artist determined to win American hearts and minds. More than 25 exhibitions of Szyk’s anti-Fascist art (which raised funds for war relief) were mounted in the United States in 1941 alone. That same year, G.P. Putnam’s Sons published to critical acclaim Szyk’s volume of anti-Nazi drawings, The New Order, one of the first American books to address the war in Europe. After the bombing of Pearl Harbor, top American magazines such as Time, Collier’s, and Esquire regularly featured Szyk’s work on their covers and interior pages. The New York Post and the Chicago Sun hired him as a feature cartoonist. Szyk also eagerly produced designs for posters, stamps, and even advertisements. More than 500 USO centers exhibited reproductions of Szyk’s work lampooning the leaders of the Axis powers; at one point, his caricatures were more popular with draftees than were photos of pin-up girls. Even the US War Department used his art to promote war bonds and enliven its propaganda films and publications. (Though the war in the Pacific dominated the national conversation, Szyk’s images continued to illuminate Nazi brutality against those they designated Untermenschen.)

Even with his intense focus on the enemy, Szyk did not lose sight of the ideals that made democracy worth fighting for. In 1942 he finished a quadriptych illustrating the Four Freedoms. Each watercolor miniature portrays the same medieval knight—perhaps a nod to the timeless nobility of the subject matter—speaking, praying, feasting, and riding off to war on a white horse, his shield emblazoned with the stars and stripes. Like so much of his wartime work, Szyk’s depiction of the Four Freedoms spread across America not as fine art works but as postcards and poster stamps sold to fund the war effort. (Later, the Four Freedoms Foundation, now the Franklin and Eleanor Roosevelt Institute, reproduced them on its annual award.) Tellingly, it is Szyk’s unique interpretation of Freedom from Fear —the knight heading to battle—that makes his ultimate point: Freedom is not a fait accompli but something to be defended and decisively won again and again, occasionally by violent means. Indeed, as Roosevelt said in his December 1940 “Arsenal of Democracy” speech, “there can be no reasoning with incendiary bombs.” By way of contrast, Rockwell’s well-known Freedom from Fear (1943) shows two American parents checking in on their children, who sleep in blissful ignorance of the world war. Under the father’s arm is a newspaper with the partially obscured headline “Bombings Ki[ll?] Horror Hit[s?]”, in reference the London Blitz. (Rockwell later expressed dissatisfaction with this painting, concerned that it expressed a rather “smug idea…. It was supposed to say: ‘Thank God we can put our children to bed with a feeling of security, knowing they will not be killed in the night.’”)

In Szyk’s wartime art, FDR’s Four Freedoms were transformed from eloquent rhetoric to incendiary imagery, visual bombs engineered to awaken American ideals and stir passionate outrage at crimes against humanity. As Roosevelt put it, “The future and the safety of our country and of our democracy are overwhelmingly involved in events far beyond our borders”—and thanks in part to Arthur Szyk, the American public was ready to take on the challenge.