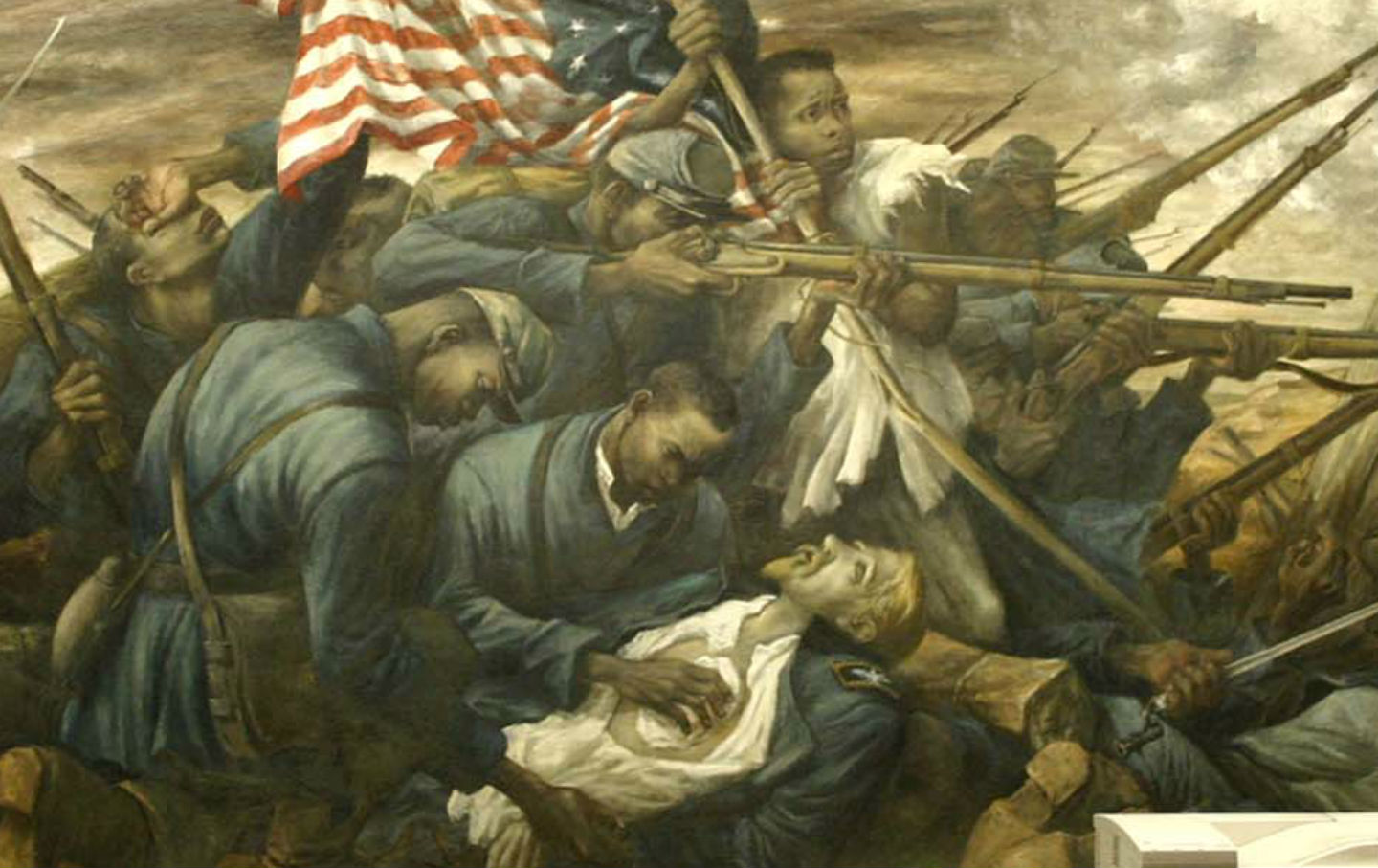 A mural by Carlos Lopez depicting the Massachusetts 54th Regiment of the United States Colored Troops at the battle of Fort Wagner in South Carolina, 1863. (CC BY 2.0)

By this week 150 years ago, the Civil War was over, the Union preserved and slavery effectively abolished. But there was one more formality needed to officially mark the end of the war: a Grand Review of the Armies in Washington, DC, to welcome the victorious troops home.

On May 23 and May 24, 1865, two clear-blue spring days in Washington, a parade of 150,000 Union soldiers marched down Pennsylvania Avenue, past crowds of ordinary citizens and reviewing stands with the nation’s most distinguished officials, including the new president, Andrew Johnson, and Gen. Ulysses S. Grant. “The sight was simply magnificent,” recalled Gen. William Tecumseh Sherman, whose raggedy Western army marched on the second day. Mile after mile, people swarmed the streets to get a view of those Walt Whitman described in a letter to his mother as “real war-worn soldiers, that have been marching & fighting for years…mostly all good-looking hardy young men…all sunburnt….”

Greeting the soldiers were Washington schoolchildren, who sang popular songs like “When This Cruel War Is Over” and “The Battle Hymn of the Republic,” and banners stretched across the avenue with slogans like “UNION AND FREEDOM FOREVER.”

Excluded from the triumphant event, however, were the almost 200,000 black soldiers who had fought on the Union side, all of whom had been conveniently kept away from Washington. The only blacks who marched were former slaves paraded as comic relief. The sight of one man propped on a mule, The Philadelphia Inquirer reported, “created much laughter, in which the President and others joined heartily.” In the same letter to his mother, Walt Whitman described “great battalions of blacks, with axes & shovels & pick axes, (real southern darkies, black as tar).”

The United States Colored Troops (USCT), the name for the group that had been officially established within the regular army in 1863 and ultimately comprised at least 10 percent of the Union army, were nowhere to be seen. “By some process it was so arranged that none should be here,” the Inquirer correspondent observed, adding: “They can afford to wait. Their time will yet come.”

A century and a half later, their time has arrived.

This weekend, the African American Civil War Memorial & Museum in Washington will host a commemorative Grand Review Victory Parade, following the route of 1865 and passing by a faithful reproduction of the original reviewing stand, which will be set up in Freedom Plaza, near the White House. “We are going to correct that great wrong in history,” says museum director Frank Smith, a former member of the DC City Council who founded the museum in 1999. “African American troops are going to march with their comrades as they should have done in 1865.”

The museum expects about 1,500 Civil War re-enactors to march, including numerous regiments devoted to commemorating the USCT, and the public is welcome to join. Throughout the weekend the museum will host a series of panel discussions (I will be participating in one on voting rights) and oral history workshops for descendants of USCT veterans, as well as a living-history experience on the grounds of a local elementary school believed to be the site of Camp Barker, which was set up by the federal government to house slaves confiscated as “contraband” by the Union army during the war. Choirs from local schools will greet the marchers with some of the same songs their predecessors sang 150 years earlier.

President Obama has been invited to “review the troops” at the commemoration but he has not yet answered the request. Dawn Chitty, the museum’s education director, says that the cost of building the replica grandstand according to the required security standards would have proven too high. It’s easy to lose oneself in the symbolism, but how disturbing to think that such considerations might preclude the first black president’s attendance at the 150th anniversary commemoration of the Grand Review, a festive occasion that marked the victory of freedom over slavery, which many attendees thought marred only by the absence of the “Great Emancipator.” Given that President Obama has received more death threats than his predecessors, many of them expressing particular ire about his race, his absence would be a painful commentary on the extent to which we have not yet escaped the spring of 1865—a time, the literary historian Richard Clark Sterne wrote in The Nation’s 100th anniversary issue, when “hosannas mingled with tears.”

It is no stretch to say that the Union could not have won the Civil War without the USCT. “They were some of the first to march into Charleston and Richmond” in early 1865, Smith points out, “and they led the procession that brought President Lincoln’s body to lay in state in the Capitol.” In addition to the soldiers’ widely acclaimed courage and fighting prowess, they brought a profound sense of mission to the North’s cause, perhaps not least because of the implied reward. As Col. Thomas Wentworth Higginson—Emily Dickinson’s editor and friend—wrote in his memoir Army Life in a Black Regiment, “It was their demeanor under arms that shamed the nation into recognizing them as men.”

The Grand Review must have seemed an ominous betrayal to veterans of the USCT, and some refused to take the insult lying down. Harrisburg, Pennsylvania, a city with a large African-American community (not far from the Mason-Dixon line), hosted an alternative Grand Review in November 1865. Black regiments from Pennsylvania marched from the State House to the home of Simon Cameron, Lincoln’s first secretary of war, who reviewed them as President Johnson had reviewed the white troops in Washington six months earlier. Community leaders, a Pennsylvania historian once wrote, “hoped to use the occasion to build support for extending the suffrage” to blacks.

Frank Smith, who was born in segregated Georgia, says he first became interested in the black soldiers of the Civil War as a young organizer in Holly Springs, Mississippi, in the early 1960s, when he was one of the Student Nonviolent Coordinating Committee’s first hires. One day he met a resident whose father had served in the USCT; he had a raggedy old blue uniform to prove it. But because of literacy tests, poll taxes, and physical intimidation, the man had never voted.

“It seemed so bizarre,” Smith recently recalled. Like most Americans at the time, influenced by the same kind of distorted historiography that depicted the era of Reconstruction as Northern aggression and folly, Smith hadn’t previously known about the USCT. “It was an inconvenient part of the story for those who wanted to tell us that the Civil War wasn’t about slavery, that it didn’t involve black people at all,” Smith says. Thanks to the Voting Rights Act of 1965, the man Smith met could vote by the time he left Holly Springs.

Smith now says he never thought he would live to see the day the Supreme Court overturned a key section of the Voting Rights Act, as it did in Shelby County two years ago. That dispiriting case, and the systematic racism of American governing institutions—finally rendered unignorable in the past year—are likely to haunt the Grand Review Victory Parade. In an interview in March, Dawn Chitty told me that the designated theme is “A New Birth of Freedom and Union,” an homage to the Gettysburg Address. I began to ask her whether that referred to 1865 or to 2015. Chitty answered before I could finish the question: “Both.”