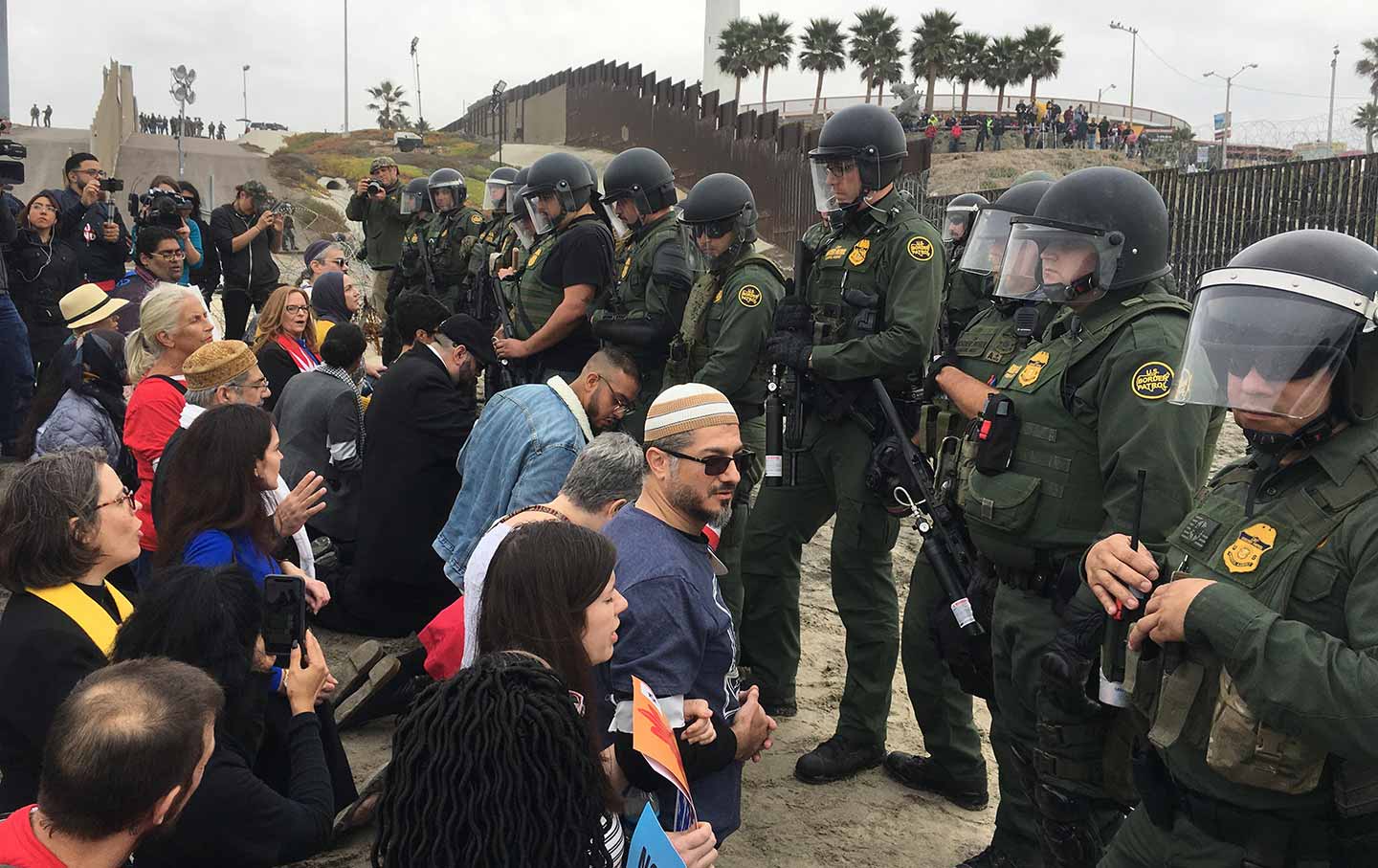 Interfaith activists kneel before US Border Patrol agents during a demonstration near the US-Mexico border on December 10, 2018. (American Friends Service Committee / Vanessa Ceceña)

Yesterday, on the 70th anniversary of the United Nations’ adoption of the Universal Declaration of Human Rights, interfaith leaders came to the US-Mexico border, just south of San Diego, by the hundreds. They flew in from around the country and kneeled in the wet sand on the water’s edge, just feet from the high metal bars, now topped by concertina wire, of the border fence separating California’s Imperial Beach from Tijuana. They intentionally trespassed on America’s locked-down, highly fortified southern border, where the massive steel bars of the fence run out into the Pacific surf, bearing what they called “prophetic witness” to the mistreatment of immigrants, refugees, and asylum seekers. They sat, they sang, they prayed. And they patiently waited to be arrested.

As they waited, their support crew, perhaps as many as 500 volunteers from churches, mosques, and synagogues around the country, stood on the other side of the federal no-trespass signs. They had slogged the mile and a half from Border Fields State Park, buzzed the whole time by low-flying drones and slightly higher-flying helicopters, through the muddy flats, over the sand dunes, and onto the bleak beach. They wore T-shirts from the American Friends Service Committee, the Poor People’s Campaign, the Service Employees union, Showing Up for Racial Justice, and a variety of other anti-racist groups. They carried banners saying “El Amor No Conoce Fronteras,” or “Love Knows No Borders.”

These men and women were bearing their own witness in support of those up against the fence, the ones who had chosen to go through nonviolent trainings and put their bodies on the line. The support group was separated from the “arrestables” by a line of paper peace doves, held aloft on sticks by stewards. 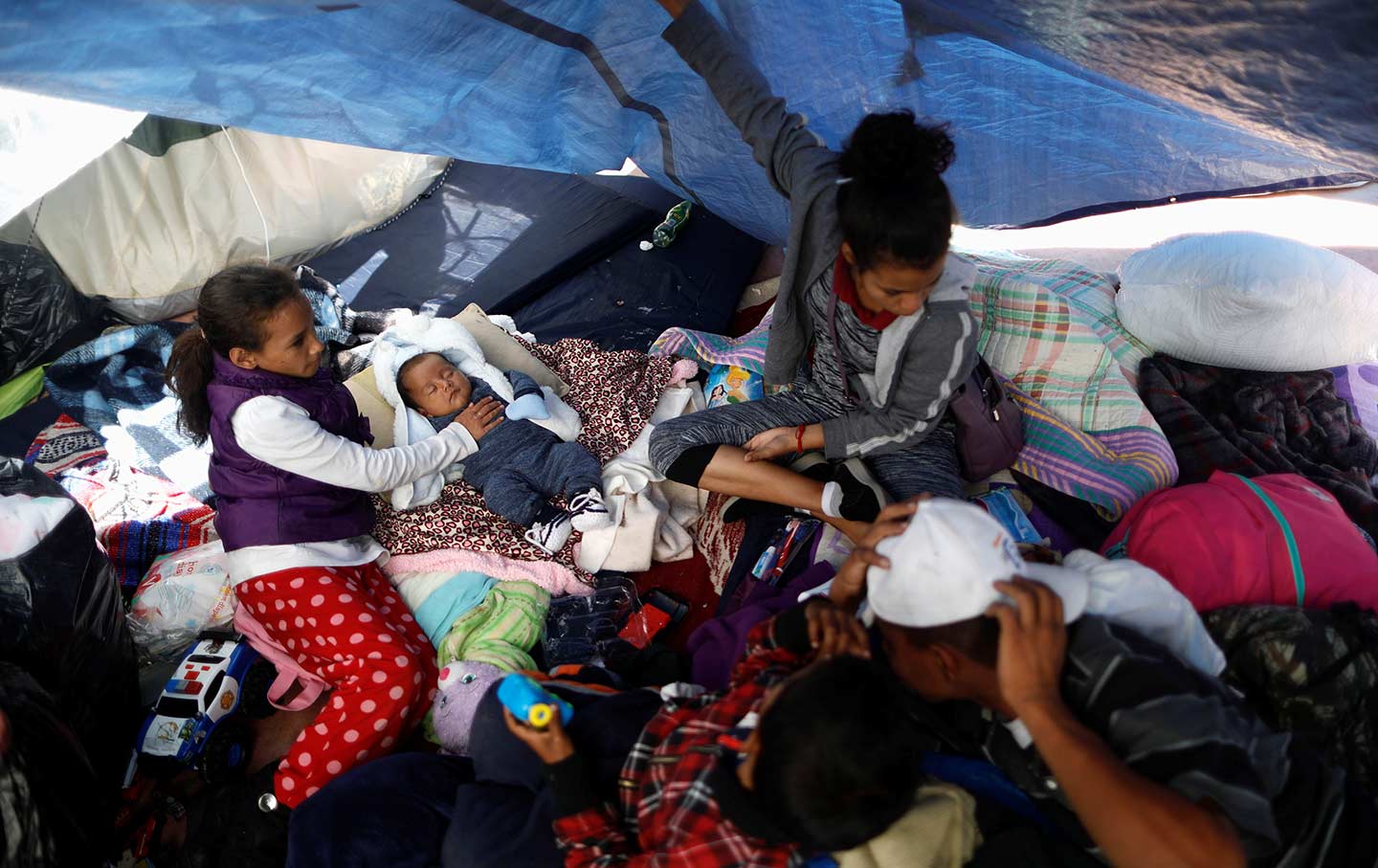 Each time the riot-gear-clad teams moved in to make arrests, frog-marching the nonresisting arrestees, including a blind woman, up the hill to waiting vehicles, the crowd cheered for the person taking the arrest. And they sang again, their words an exorcism of the cruelty taking place before them. “We are not afraid. We will stand for liberation, because we know why we were made.” Then “La liberta es mi unica bandera,” they chanted, to drum beats from the musicians marching with them: “Liberty is my only flag.”

The colonias of Tijuana rise up on the hills just across the fence, the walls of the buildings covered in murals. This militarized frontier is so close to Tijuana that cell phones buzz with messages from providers erroneously saying that users are now in Mexico. The stadium and the flooded, sewage-filled encampments in which thousands of asylum-seekers are now being kept are hardly more than a stone’s throw from the fence. Their plight was given all the more urgency by Trump’s decision to allow the military to respond to stone throwers—and, in practice, nonviolent families with children—with tear gas and even lethal force.

As the prophetic-witness protests continued, dozens, then hundreds, of onlookers came down from the houses and hills of Tijuana to see what was going on. They pressed their faces against the cold metal bars, looking north through the bars at this Land of the Free, as beefy, uniformed federal officers grabbed nonresisting men and women of the cloth. They listened as the demonstrators chanted rhythmically, the beat itself a way to banish fear.

“There is no biblical mandate demanding deportation, demanding documentation. Our God tears down walls. We welcome the stranger, give food to the hungry,” Pastor Caleb Lines, of the University Christian Church, had told this crowd the previous evening, when hundreds crammed into his place of worship in the Hillcrest neighborhood of San Diego to kick off a week of national actions around the human-rights crisis on the border. At that kickoff event were rabbis, imams, priests. All were in San Diego to disavow the actions of the US government on the border.

In an extraordinarily powerful speech near the end of the two-and-a-half-hour service, the Rev. Traci Blackmon, a St. Louis–based minister with the United Church of Christ and a steering-committee member on the Poor People’s Campaign, talked of how the “brown-skinned Jesus, seeking refuge in a foreign land,” would not have been admitted into Trump’s America. How “his family might have been greeted with tear gas or rubber bullets, or, worse yet, he might have been taken from his mother’s arms.” Blackmon told the gathering that they were “compelled to show up and guide this country to our moral selves. When laws are co-opted for greed and political gain, and used as weapons of disenfranchisement, then people of faith and of moral character are compelled to resist in the interest of preserving our humanity.”

By the end of the next day’s protests, the first in a week of national actions against the increasingly harsh, dehumanizing treatment of immigrants, roughly 30 people had been arrested. As of last night, all but one of them, an American Friends Service Committee staffer, had been released.

“Our main goal,” 33-year-old Pastor Lines told me as the marchers started off toward the fence, “is to raise awareness about the injustice occurring on the other side of the border. And the call is for our nation to obey its own laws and grant asylum seekers the rights they are guaranteed.”