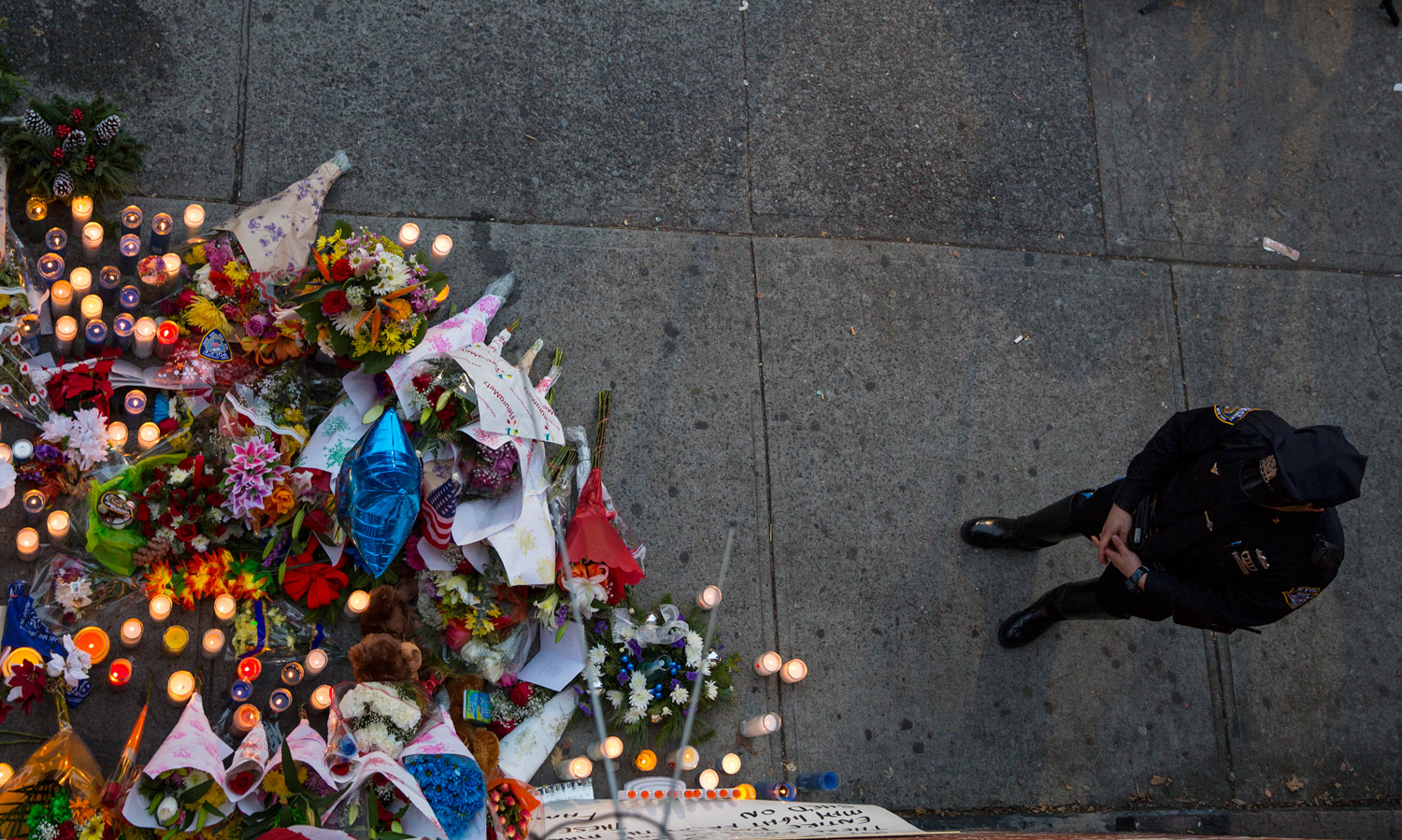 In the United States, news was still fresh that Ismaaiyl Brinsley, also a man with a history of untreated mental disease, shot his ex-girlfriend in the stomach, then took a bus to New York and executed two police officers, declaring himself to be acting on behalf of Michael Brown and Eric Garner. Here, however, there were torrents of blame. Patrick Lynch, head of the Patrolmen’s Benevolent Association, announced that Mayor Bill de Blasio had “blood on his hands” for sympathizing with protesters against police misconduct. Former New York governor George Pataki called the killings the “predictable outcome of divisive, anti-cop rhetoric” by Attorney General Eric Holder. Former police commissioner Ray Kelly blamed “the reality” that stop-and-frisk policies had been an issue in the campaign, as though policing policy should never be a matter of electoral politics. Rudolph Giuliani, seeking higher moral ground, also blamed President Obama. And within hours of the tragedy, Fox News was furiously blaming its usual lineup of villains: Al Sharpton, soft-hearted liberals, soft-headed academics, outside agitators, and anyone who’d joined in any protest anywhere in the United States since last August, when Brown was shot in Ferguson.

On TV, a commentator asked with great earnestness if Brinsley’s rampage was “connected to national events.” There are, of course, many crimes committed in the name of national events—or Jodie Foster, or Andy Warhol, or space aliens. Jared Lee Loughner shot a congresswoman, Gabrielle Giffords, whom he reportedly despised from afar. Aurora, Colorado, mass shooter James Holmes was a Batman fan and carried out his rampage at a screening of the latest Dark Knight film. And in Adam Lanza’s horrific school shooting at Sandy Hook, no motive was ever established. So before we lay responsibility at the feet of any more politicians or movements or hip-hop or the pope, let’s acknowledge what these particular incidents have in common: “untreated mental illness” in our land of guns aplenty.

A quick definitional primer may be in order, since so many recent shootings have involved either psychosis of some sort—mostly schizophrenia—or post-traumatic stress disorder. Schizophrenia is an incurable brain disease that, in its more paranoid manifestations, can cause delusions of persecution, distorted perceptions of reality, illusions of grandeur, magical thinking and auditory hallucinations (or “voices”). While it is not surprising that such confusion could occasionally lead to aggression, untreated schizophrenics are much more frequently the victims of violence. Often incapable of responding rationally to commands, they are disproportionately among those jailed or killed by police untrained to handle mental illness, as in the cases of Keith Vidal, Dontre Hamilton, Michelle Cusseaux and James Boyd, all schizophrenic civilians recently killed by police.

Post-traumatic stress disorder is occasioned by exposure to violence or an invasion so deep that it bypasses the capacity for language. Flashbacks are one symptom. Rarer is compulsive behavior that re-enacts some version of the original assault: perhaps promiscuity if one has been molested, or explosive or violent behavior if one has survived war. It is a suspected cause behind Iraq veteran Bradley William Stone’s recent murder of his ex-wife and five members of her family. Rates of PTSD are also disproportionately high among police and prison guards, indicating broad disrespect by policy-makers for the stresses of the job. If there is no funding for screening, counseling or treatment, or if police officers are underpaid or untrained or overworked, or if their higher-ups force on them unfair profiling practices that all but guarantee their presence will be resented on the street—this state of affairs endangers public space no less than common criminality.

I offer none of this as a definitive explanation for any act of violence. But given clear evidence that Ismaaiyl Brinsley was mentally unsound, it is remarkable that the media could assign direct cause-and-effect to the atmospherics of news. If Brinsley had tweeted that William Shakespeare made him do it, would Fox & Friends be blaming teachers’ unions for troubling the waters?

It is its own kind of madness to blame these murders on those who do no more than debate the proper use of force by police, as Fox and others have done. (As in: guns don’t kill people, public discourse and protestors without guns do.) This response chills freedom of expression, not least by using one psychotic individual as the stand-in for a national debate in desperate need of actual resolution. If Brinsley becomes the embodiment of “Black lives matter” or the Willie Horton–ized face of “Hands up, don’t shoot!”, then no use of force by the police can ever seem too excessive. No wonder we need stop-and-frisk—“they” are executioners!

Lest we lose sight of the issue: approximately 80 percent of African-American men between 16 and 24 have endured unsolicited stops by the New York Police Department. Only 10 percent of whites in the same age cohort have. This does not reflect inherent criminality, but rather a pattern of discrimination. To observe that much, to discuss it and to push to change it is not the equivalent of “stoking hatred.” By the same token, we can surely agree that any individual who commits unprovoked homicide in disregard of our laws must be restrained, either in well-maintained hospitals or prisons. And that goes for us all—unstable police officers no less than the Jared Loughners and Ismaaiyl Brinsleys of the world. One unjust killing does not rank in heinousness above another.