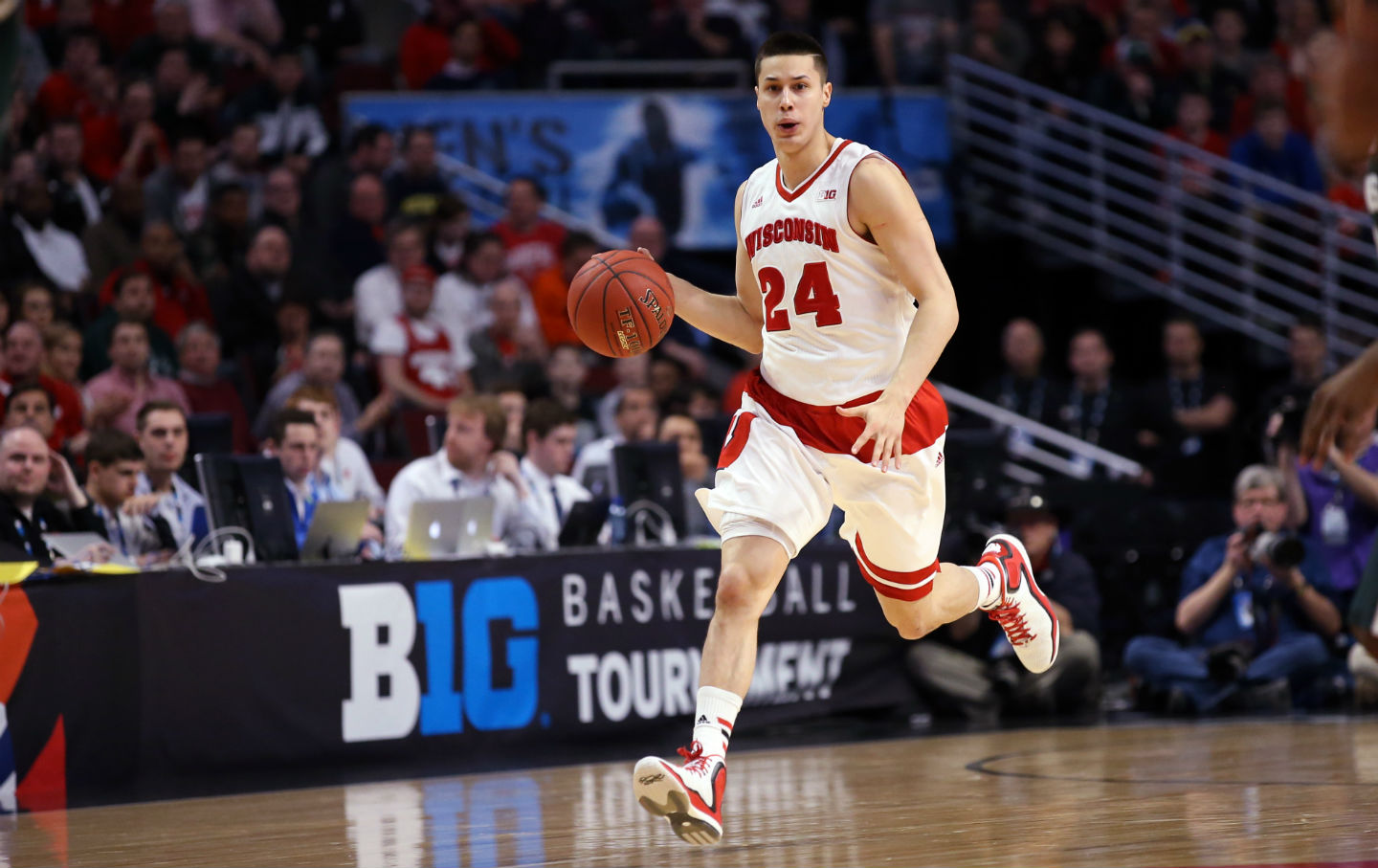 On January 11, 2015, Bronson Koenig, backup point guard for the University of Wisconsin men’s basketball team, was thrust into a starting role for the NCAA basketball’s sixth-ranked team after senior point guard Traevon Jackson went down with a broken foot. “I’m obviously going to have to start being more vocal as a leader,” Koenig, a sophomore, said following the announcement. “One area of improvement I need to really start working on is my leadership and being more vocal, but I’m confident that I’ll step into that role.”

Since entering into the spotlight, Koenig has been vocal indeed, on and off the court. A proud member of the Ho-Chunk Nation, Koenig is one of only forty-two athletes in Division I NCAA basketball who identify as American Indian/Alaskan Native out of the more than 10,000 Division I basketball players in this country. The Ho-Chunk’s land once spread across Wisconsin, Iowa, Illinois, Nebraska, South Dakota and Minnesota. Throughout the 1800s, however, they were removed from their lands eleven times, eventually being forced to move to parcels of land in Wisconsin and Nebraska. Koenig grew up not far from this land, in LaCrosse, Wisconsin, where he attended powwows and learned about his Native heritage. He has used his newfound national platform to show his Native pride, especially when it comes to the fight against racist mascots.

Soon after assuming the role of starting point guard, Koenig spoke with Brian Hamilton of Sports Illustrated about being a role model for Native American youth. Days later he touched on the subject again in an interview with Jeff Potrykus of the Milwaukee Journal Sentinel. “His tone changed,” however, “when the topic turned to the treatment of American Indians,” Potrykus wrote. “When a Native American kid sees that growing up and sees the disrespect, it lowers their self-esteem and puts them in a lower place in society,” Koenig told him. He continued, “It’s honoring them? It’s not racist? How are you going to say that when you’re not a Native American?” Koenig made sure to highlight the name of the Washington football team being the worst: “That term comes from when we were skinned and our flesh was red. I don’t see how that is honoring us in anyway.”

Koenig’s statement reflects the ethos of “Change the Mascot,” a national campaign to end the use of racist mascots and team names, from Washington’s football team to small high schools across the country. Launched by the Oneida Indian Nation in 2013, the movement has increasingly gained traction, especially in response to a powerful commercial aired in key markets during last year’s NBA finals. Images of Native Americans, past and present, flash on screen accompanied by a voiceover giving various descriptors, such as “proud,” “forgotten,” “survivor,” “spiritualist” and “patriot.” The voiceover concludes, “Native Americans call themselves many things, the one thing they don’t…” and the commercial ends with a photo of the Washington team’s helmet. The push has given courage to athletes, commentators and others to say no to racist mascots.

One person who stands in direct opposition to this, besides Dan Snyder, owner of Washington’s football team, is Wisconsin Governor Scott Walker.

In 2013, Walker signed a bill that makes it harder for public schools to change racist mascots and names. The law, which he claimed to support to defend the First Amendment, requires 10 percent of a district’s students to sign a petition within a 120-day period to earn a hearing regarding changing a mascot name. A spokesperson for the Wisconsin Indian Education Association called the law, “an example of institutionalized racism.”

While Governor Walker might not be supportive, Badger fans have been. “I certainly agree with Bronson Koenig, as I think most Badger fans do,” says Gary Peterson, a life-long Badger fan. Susan Schmitz, a Madison native and a University of Wisconsin–Madison alum, expressed her support for Bronson and all players willing to stick their neck out. “I am very proud that the team has players like Bronson, who is willing to take a stand against racist mascots. This is especially important as our governor has continued to attack American Indians and all working people in the state.”

As a Wisconsin native, I couldn’t agree more. It’s good to see players like Koenig who have principles and are willing to fight against racism. As March Madness is just around the corner and the Badgers have earned a number one seed in the tournament, I’m hoping we will see Koenig help the Badgers make their second straight appearance in the Final Four and give another platform for this discussion.