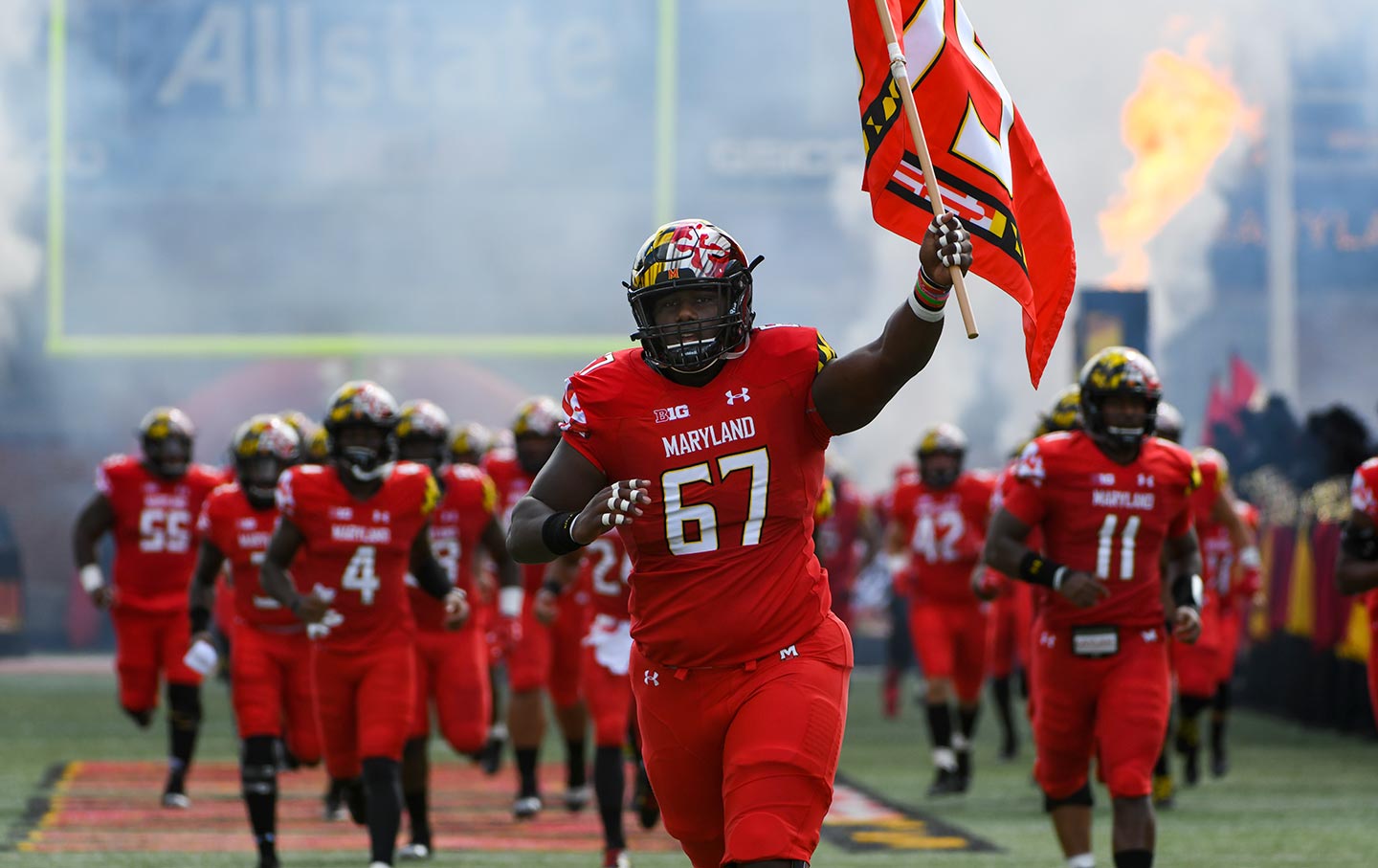 Maryland Terrapins offensive lineman Tyran Hunt leads the team out and carries a flag with the number 79 on it to commemorate the late Jordan McNair who died prior to the start of the season in 2018. (Icon Sportswire via AP Images / Mark Goldman)

There is a bill in the Maryland statehouse that would give college athletes the right to unionize. It comes in the aftermath of the death of University of Maryland offensive lineman Jordan McNair during the 2018 offseason. The bill, according to its early language, would require “the State Higher Education Labor Relations Board to adopt regulations authorizing and establishing the process for collective bargaining for student athletes on or before July 1, 2020.”

I spoke with one of the bill’s sponsors, State Delegate Brooke Lierman, who represents District 46 in Baltimore City and was moved by McNair’s death to introduce this legislation.

“It was horrific,” she said. In addition to the negligence, recommended medical staff had been turned away by the athletic department. Lierman cited an ESPN story by Heather Dinich that exposed the details of the event and the culture of the football program at the school. “What was happening was shocking.… I realized that I was angry, in part, at myself for not doing more to help our college athletes. Because, if the university is not going to correct the situation, then I think it’s up to state legislatures to step in and to say, ‘This is not acceptable. These are Marylanders. These are our kids. We need to be taking better care of them.’”

Delegate Lierman said that she first started thinking about the injustices of the NCAA in 2011 when reading The Shame of College Sports, by Taylor Branch. She said, “When it came out, it was the first time I started thinking about the power imbalance and the inherent unfairness of what was going on at our colleges.” The article made Lierman reflect on her own history as a student-athlete at Dartmouth where she rode crew: “I was given the Best Freshman award. But I decided I didn’t want to keep rowing because it was so demanding. So I decided that I wanted to do something else and my coach was furious. I mean, he basically said ‘You owe us, you have to stay.’ I remember feeling sort of afraid. I was 19 years old, feeling really guilty. And then when I wasn’t rowing anymore and he was still angry at me…I started remembering the power imbalance, even at such a small level, and I can’t even imagine how different it is for scholarship athletes playing football or playing basketball.”

After McNair’s tragic death, Lierman thought about the best way to “help correct the balance of power between the universities and the athletes” and landed on the idea of player unionization. “Every year, there’s a bill introduced to give graduate-student assistants collective-bargaining rights. So I thought, ‘If graduate-student assistants have bargaining rights, why couldn’t student athletes?’I think that something like having a collective-bargaining agreement, having a union or having an advocate on your side, as a student athlete, would make a difference. This bill would allow for that. It would help them establish protections on scholarship terms, on health benefits, on other issues.”

There are already people saying that they don’t think this legislation has much chance of passing. But Lierman believes that “the events of the past year shocked people and awakened in them a desire to really step up to the plate and really do more for student athletes.”

The first hearing on this bill will be February 26. This issue is not going anywhere, and neither is the memory of Jordan McNair. Unionization or some form of collective protection needs to become part of the reality of college sports. Bills like this, supported by demonstrations, rallies, and movements by students and athletes on the ground, are how we are going to get there.