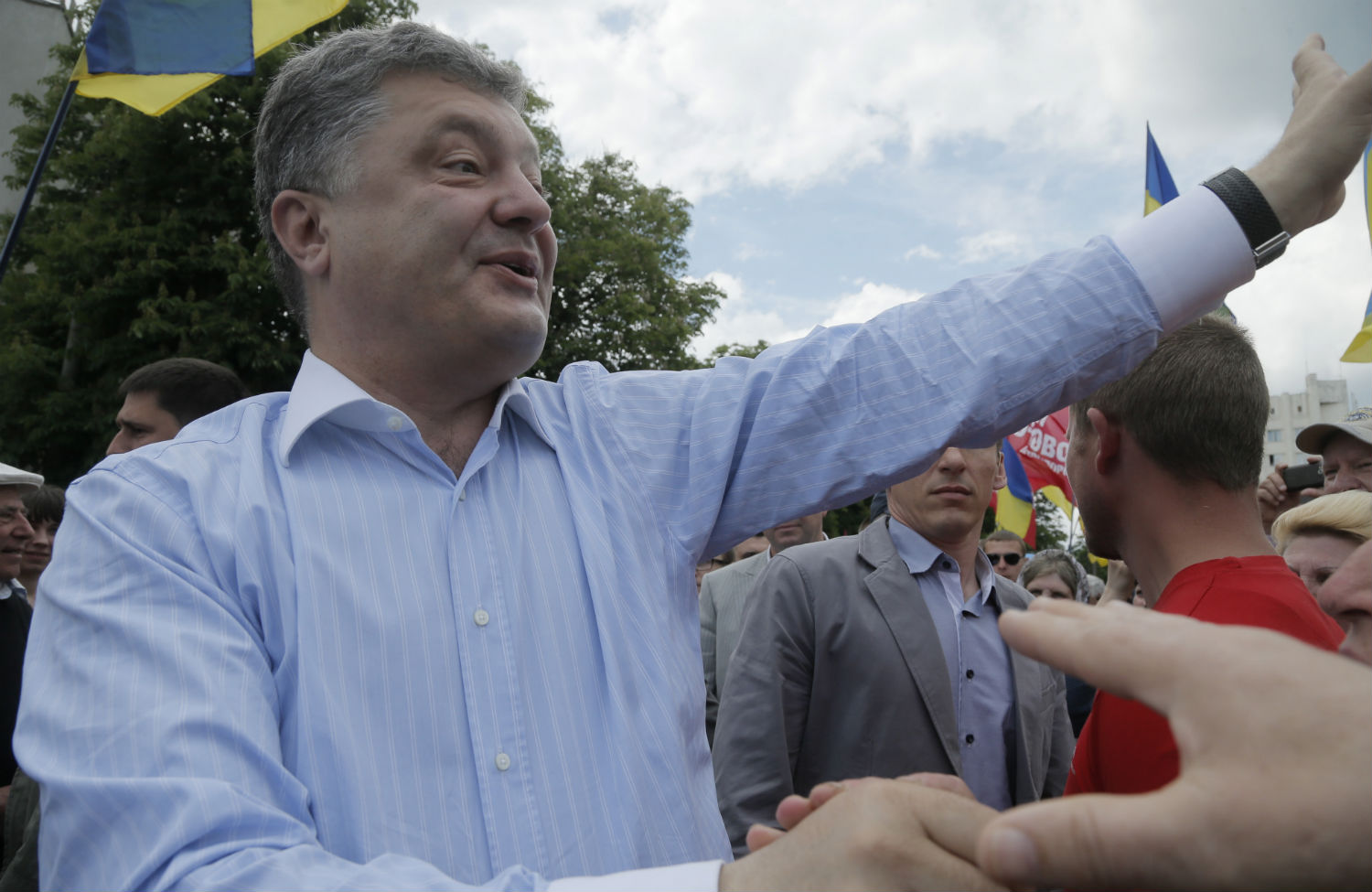 Ukrainian presidential candidate Petro Poroshenko at a rally in Uman, Ukraine, Tuesday, May 20, 2014. The presidential vote is scheduled for May 25. (AP Photo/Efrem Lukatsky)

UPDATE Tuesday, May 27: Poroshenko's victory has been welcomed by both the United States and, a bit less enthusiastically, by the Russians, too. The president-elect, as he appears to be, says that he'll visit Moscow to talk to Putin, and that his first trip will be to eastern Ukraine to try to resolve the mini-crisis there. That's all good, and perhaps the crisis in Ukraine — which has been overblown by many into an incipient WW III — is over, or at least winding down. No doubt, Ukraine will keep the military pressure on the rag-tag separatists in the Donets Basin, without launching the kind of all-out offensive that would put pressure on Russia to intervene on their behalf. Stay tuned.

ORIGINAL POST Leave aside the nonsense and chatter over Ukraine—the less-than-astute observation from Prince Charles that Vladimir Putin is a new Hitler and Putin’s own efforts to portray modest violence in eastern Ukraine as a “dangerous civil war”—and it appears that things are getting better in Ukraine just days before its presidential election is held. Unfortunately for Ukraine, the winner is likely to be yet another unsavory billionaire and oligarch, but that’s just about all Ukraine has had to choose from in recent years, and there’s no Thomas Jefferson on the ballot. But even Russia’s Foreign Minister Sergei Lavrov, who’s been decrying “fascists” all over Ukraine, appears to agree that the leading candidate, if no Jefferson, is at least not a fascist.

Still, as Ukrainians get ready to head to the polls, even in most of the east, Putin says that even though he considers the May 25 elections illegitimate, he’ll respect the new president of Ukraine and that he’s ready to work with him or her, according to The Moscow Times:

We want to calm the situation and we will respect any choice Ukrainian people make. … I just hope the violence will halt after these elections. We will work with the new Ukrainian authorities.

Not only that, but after several weeks of promising to withdraw Russian forces from just across the border with Ukraine without actually carrying out any pullback, Russia now seems to be removing some of those forces, says the Kyiv Post, citing NATO’s commander. There are still deadly skirmishes in the east, including one that left at least thirteen Ukrainian soldiers dead and another in which Ukraine says that its border guards halted armed men from crossing into Ukraine from Russia—but in any case it’s overwhelmingly clear that most Ukrainians in the east, whether Russian-speaking or not, don’t want partition or division of the country and don’t support the ersatz “people’s republics” that have been proclaimed by would-be Lenins in the Donbas region.

The likely victor in Sunday’s election, who’s far ahead in the polls, will be Petro Poroshenko, the “chocolate king” who, according to Al Jazeera, is close to or over the 50 percent threshold that will prevent a runoff vote. (One Ukrainian quoted in the Al Jazeera piece calls Poroshenko the “best of the worst,” which sounds about right.) During his political career since the late 1990s, Poroshenko has worked all sides of the fence in Ukrainian politics, serving in Parliament and working under the “pro-Western” President Viktor Yushenko as well as under two other “pro-Russian” presidents, Leonid Kuchma and Viktor Yanukovych, the latter of whom recently fled to Russia after the Ukrainian revolt.

In its report on Poroshenko, The New York Times—which describes him as a “pro-Western billionaire”—outlines a behind-the-scenes story that suggests that Poroshenko could indeed serve as a bridge between the West and Russia if and when he takes office. According to the Times, Poroshenko’s “path to the presidency” was brokered by a corrupt wheeler-dealer who has close ties to Russia’s gas giant and to the ousted Yanukovych. Reports the Times:

The deal was reached at a meeting in Vienna orchestrated by Dmitry V. Firtash, the gas-trading tycoon, who was a longtime political patron of Mr. Yanukovych and has close business ties to Gazprom, the Russian state-controlled energy giant.

In an op-ed for the Kyiv Post, Firtash tries to portray himself as both Western-leaning and one who advocates neutrality for Ukraine and a balance between West and East, noting that his own business has “business partners and private capital from the East and the West,” and adding:

I believe in a united, independent, and neutral Ukraine. This is not only in the national interest of our great country; it is, without doubt, in the interests of all who want peace and prosperity for all people.

Like most Ukrainian oligarchs, Firtash appears to be a crook, and he’s been indicted in the United States for bribery. The Moscow Times, quoting an interview with Firtash in Bloomberg, seems to suggest that despite his record Firtash might be a half-decent mediator:

Ukrainian billionaire Dmytro Firtash, charged with bribery in the US and currently awaiting an extradition hearing in Vienna, said that he is “ready to act as a negotiator between Russia and Ukraine,” Bloomberg reported Tuesday.

“I know what to do. If Ukrainian politicians are impotent, I have to step in,” Firtash said. The businessman said that his connections to Russian state-run oil giant Gazprom and its affiliate Gazprombank, as well as his friendship with Russian construction magnate Arkady Rotenberg, a close ally of President Vladimir Putin, give him a unique position from which to broker a resolution to the Ukrainian crisis.

In late April, in a lengthy interview with The Washington Post, Poroshenko laid blame for the eruption of violence in eastern Ukraine on Russia’s special forces—not an outlandish suggestion—and said that he’ll resist radical federalization of the country, which is what Moscow has proposed, but stressed that if elected he’ll want good relations with Russia, “Because without a direct dialogue with Russia, it will be impossible to create security.”

So far, President Obama has resisted calls from hawks to get more deeply involved in Ukraine, including demands by Republicans in Congress that the United States supply arms to Kiev.

Meanwhile, there’s an interesting parallel between Ukraine and Syria. In Syria, where there is a real civil war—more than 100,000 killed and millions of refugees created—President Bashar al-Assad is once again running for president, with the vote scheduled for June 3. In that contest, Russia is backing Syria, and Putin seems to have no problem with holding a vote in the midst of near-chaos. On the other hand, in Ukraine, where the violence is sporadic and limited to a few pockets of rebellion, Putin and Lavrov suggest that it’s probably impossible to hold a useful vote. Still, for the past several weeks, both Putin and Lavrov have suggested that the election in Ukraine might elevate someone that Russia “can do business with.” Let’s hope so.