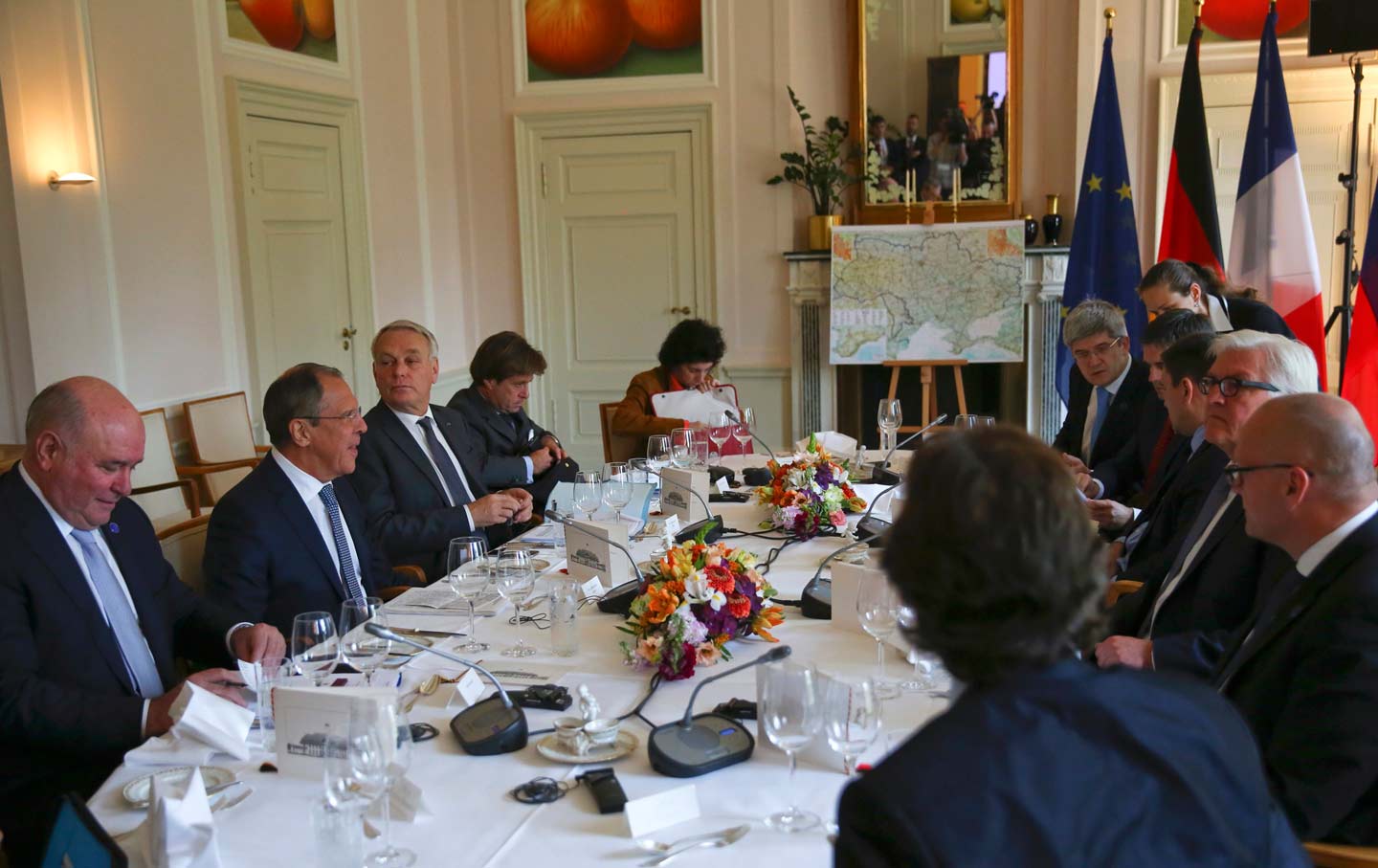 The foreign ministers of Russia, France, Ukraine, and Germany sit at a table prior to talks in Berlin, Germany, on May 11. (Hannibal Hanschke / Pool Photo via AP)

The foreign ministers of Germany, France, Russia, and Ukraine met for the 12th time on Wednesday to discuss the ongoing obstacles toward the full implementation of the Minsk cease-fire accords. German Foreign Minister Frank-Walter Steinmeier, who was moved to call this latest meeting as a result of a recent flare-up in violence in eastern Ukraine, noted that this latest round of talks was just about as successful as the previous round: not very. While Russia and Ukraine did reach an agreement on the creation of demilitarized zones in areas held by the rebel forces, Steinmeier conceded that “The talks were difficult once again.”

As ever, the principal point of contention between the Russian and Ukrainian sides has to do with the holding of elections in the breakaway “people’s republics.” The position taken by Ukrainian Foreign Minister Pavlo Klimkin is that a full cease-fire must precede any move toward holding new elections. That position, however, happens to contradict what was agreed to under the Minsk protocol. According to the UN’s Office of the High Commissioner for Human Rights (OHCHR), it is Kiev that has yet to implement “critical measures” relating to Minsk, including, “the much-awaited parliamentary vote on decentralization.” That vote, which has already been postponed, is an essential part of the Minsk process, and according to the OHCHR, is “to be the precursor to a series of steps toward peace…” (emphasis mine).

Meanwhile the military, economic, and political situation on the ground in the Ukraine worsens by the day. As recently as May 5, the Special Monitoring Mission (SMM) of the OSCE reported a “marked increase in violence.” On May 4, in government-controlled Svitlodarsk, the SMM reported “210 undetermined explosions and 580 bursts of heavy-machine gun fire 4-10km south-east and south of its position.” According to UN estimates, the civil conflict in Ukraine has taken the lives of over 9,000 people.

While the fighting continues to run hot and cold, the economic situation in Ukraine continues to deteriorate. According to the scholar Nicolai Petro, “In little over a year, living standards in Ukraine have fallen by half, the value of the currency has slumped by more than two-thirds, and inflation has skyrocketed to 43%.” The downturn has been particularly acute in the east, where the local economy has taken a sharp downturn due to the loss of access to the Russian market.

Besides the economic hardship, the country remains at risk of being further divided by what might reasonably be seen as Kiev’s illiberal turn. Recent media attention to the goings-on in Kiev have tended to focus on President Petro Poroshenko’s connection to the Panama Papers and the recent resignation of Prime Minister Arseniy Yatsenyuk. Less remarked upon is the fact that the new speaker of the Verkhovna Rada (Ukraine’s parliament) was a founder the neo-Nazi Svoboda party. Meanwhile, the Kiev city council is considering a bill that would effectively ban businesses and advertisers from using the Russian language, while President Poroshenko recently declared that Russia is “financing and supporting fifth columns” within the country. All this is taking place amid reports of far-right gangs attacking gay-rights marchers in Lviv and old-age pensioners in Kiev. This past weekend, elderly celebrants—including a 91-year-old woman—were roughed up at May 9 Victory Day celebrations in Slavyansk.

Given all this, its hard to know if the gangs are taking their cues from the politicians, or vice versa.

Nevertheless, it doesn’t take a quantum leap in imagination (or in empathy) to suspect that the Russophone part of the country might find all of the foregoing rather disconcerting. The question facing European leaders like Steinmeier (and his boss, Chancellor Merkel) is whether the collapse of Ukraine’s economy, the continuation of the war, and the accompanying social and political divisions could midwife a refugee crisis with which the EU is ill-prepared to deal. In any event, as the crisis heads into its third year, the news out of Ukraine hardly lends itself to a hopeful conclusion.