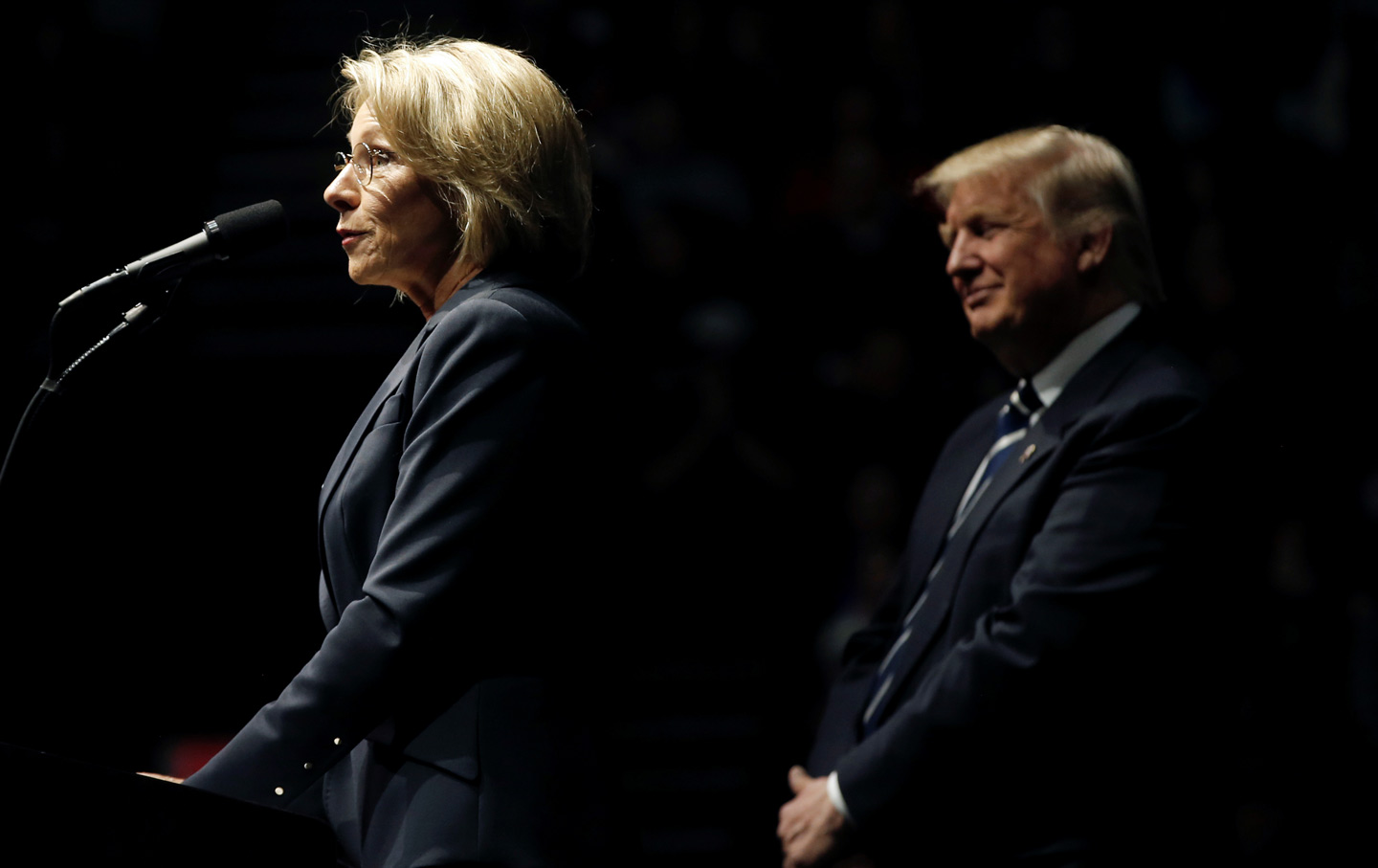 The traditional media has yearned of late to deem Donald Trump’s White House staff and cabinet a “team of rivals,” with wide disagreements on economic policy. I don’t really see it; despite a few variances here and there, by and large Trump’s advisers all fall in a comfortably snug ideological range, with dedication to doctrinaire conservative economic beliefs about tax cuts and deregulation. And another area of consensus sticks out: the idea that government should outsource public functions to private industry.

In the Public Interest, a research organization monitoring privatization, has compiled a list of 32 different members of the Trump transition team or formal nominees for top agencies who have either close ties to privatization groups, or demonstrated support for the philosophy. If these officials get their way—and there’s no reason to think they won’t—America’s schools, roads, air-traffic-control systems, prisons, immigrant-detention centers, and critical social-insurance programs will soon fall into private hands.

“Donald Trump ran on improving the lives of working families, yet he’s surrounding himself with people that want to line the pockets of corporations and the politically connected,” said Donald Cohen, executive director of In the Public Interest, in a statement.

The list includes Vice President-elect Mike Pence, a leader of ultimately unsuccessful efforts to privatize Social Security during the Bush administration, along with high-profile cabinet picks like education secretary nominee Betsy DeVos (a known advocate of steering public money to private charter schools), health and human services selection Tom Price (whose relentless advocacy for the privatization of Medicare is well-documented), and defense secretary James Mattis (recipient of almost $1 million in compensation as a board member of major defense contractor General Dynamics).

One lesser-known connection is between attorney general nominee Jeff Sessions and the private-prison industry. In October, a couple months after the Justice Department announced that they would phase out the use of private contractors in federal correctional facilities, Geo Group, one of the two dominant private-prison operators, hired two former Sessions aides as lobbyists. Sessions is expected to reverse the privatization phase-out (which wasn’t much of a phase-out at all, actually, as Obama’s Bureau of Prisons renewed a private-prison contract just last month).

But perhaps even more troubling than the cabinet choices are the less visible members of the transition policy and implementation teams. These staffers will play a key role in hiring the thousands of lower-profile policy-makers the president gets to appoint. Seeding the federal bureaucracy with privatization fans at a level closer to policy execution will facilitate the outsourcing of public functions almost as much as a directive from a cabinet official.

This suggests strong advocacy in Trumpworld for public-private partnerships, which provide additional capital for infrastructure projects but which have been sharply criticized for putting commonly used services like roads and bridges under private control. Despite claims that these setups save taxpayer dollars, they really act as a privately collected tax, paid out over decades in tolls and fees. Trump’s blueprint for the first 100 days highlights an infrastructure plan that “leverages public-private partnerships.”

Other officials have even closer ties to privatization schemes. Lore Ries, on the Department of Homeland Security transition team, has not only lobbied for a number of homeland-security contractors; she currently works for CSRA International, a technology contractor that privately runs gang databases for the FBI, Immigration and Customs Enforcement, the Bureau of Alcohol, Tobacco, and Firearms, and 13 states. Seema Verna, the nominee to run the Centers for Medicare and Medicaid Services, is known for redesigning the Medicaid program in Indiana. But as a health-policy consultant, she also assisted Iowa in privatizing their Medicaid system by shifting it to managed care.

Other notable officials include Kay Cole James, who supported privatizing the collection of Virginia’s child-support payments when she ran the state’s department of Health and Human Resources. She’s on the Trump management and budget transition team. Myron Ebell, the notorious Competitive Enterprise Institute official leading the Trump EPA transition, worked in the 1990s on replacing the Endangered Species Act with a “incentive-based conservation program” that would have paid off landowners to create viable habitats. This would turn a regulatory structure completely over to the market.

The perspective of Trump’s crew can be best summed up by transition team member and former Heritage Foundation president Edwin Feulner, who said in 2013 that “any government function that can be found in the yellow pages should be a candidate for privatization.”

Companies ready to capitalize on a new era of privatization have thrived since the election, from private-prison firms to for-profit colleges. Even financial institutions are salivating at the prospect of re-privatizing the issuance of student loans. Presumably Trump’s functionaries are scanning phone directories for more opportunities.

“Privatization increases inequality, limits transparency, and often times ends up costing us more in the long run,” said Donald Cohen of In the Public Interest. “We also give up control of crucial public goods and services like education and water. The American people should decide how we spend our tax dollars, not corporations.”