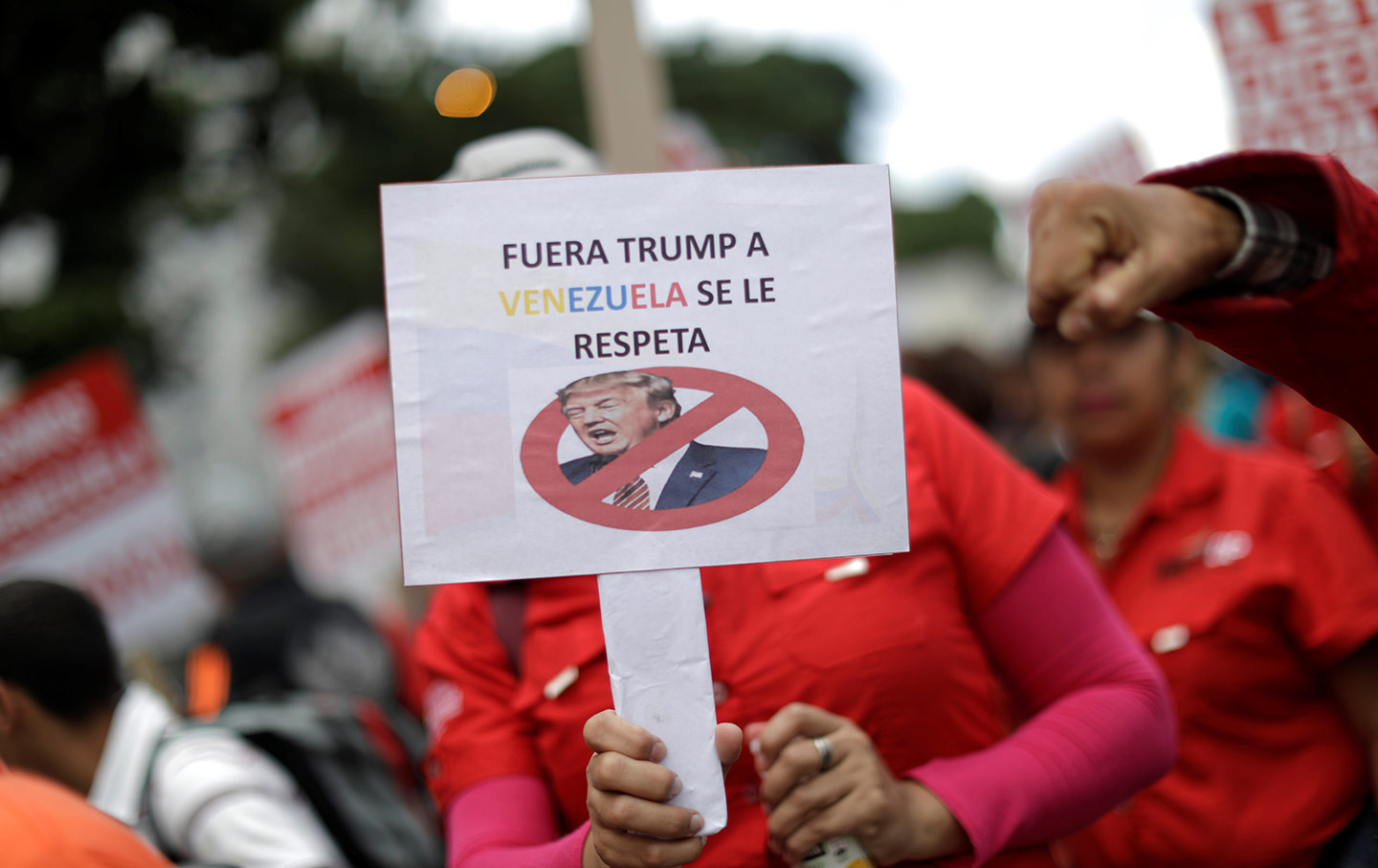 A pro-government supporter holds a sign that reads, "Trump, get out! Respect Venezuela," at a rally in Caracas, Venezuela, on August 14, 2017. (Reuters / Ueslei Marcelino)

At the end of August, the Trump administration imposed harsh sanctions on Venezuela that prevent the country from borrowing or selling assets in the US financial system. The new embargo will exacerbate shortages of food, medicine, and other essential goods, while severely limiting the policy options available to pull the country out of a deep depression.

Prior to these sanctions, it was possible for the Venezuelan government to launch an economic-recovery program that could have restarted economic growth. Unlike most countries suffering from a balance-of-payments crisis, Venezuela would not necessarily have to go through a period of “structural adjustment,” as it used to be called before IMF programs gave this term a bad reputation. In this kind of adjustment, living standards typically fall, at least temporarily, because the country has to cut imports in order to balance its external accounts. Venezuela has already cut imports by about 75 percent since 2012. This is an astounding number; Greece, for comparison, has reduced imports by about 31 percent after suffering through a depression for most of the past seven years, which is twice as long as Venezuela’s current crisis.

This means that Venezuela’s economy could begin to recover fairly quickly in response to the appropriate reforms, without having to endure further declines in output or employment. Or at least that was true until Trump’s August 25 executive order.

The adjustment that Venezuela needs is primarily of relative prices, most importantly its exchange rate. We can see this by looking at what has happened over the past five years. In October of 2012, inflation was running at an 18 percent annual rate, and the black-market price of $1 was 13 BF (the domestic currency). Over the past year, inflation has been more than 600 percent, and $1 costs more than 17,000 BF.

These two trends reinforce each other in an “inflation-depreciation” spiral. As inflation increases, more people want to hold dollars; as they buy dollars, the black-market price of the dollar rises. This increases the cost of imports, which drives up inflation, and the cycle continues.

If we look at the data from the past five years, this process has been more or less constant. Today the government still gives away more than 90 percent of its dollars at a rate of 10 BF per dollar. This is supposed to be used for the import of food, medicine, and other essential items. But you can imagine the incentives for corruption when a dollar that costs 10 BF can be sold for more than a thousand times that on the black market.

Of course, the collapse of oil prices made everything much more difficult for Venezuela, since oil accounted for 95 percent of its exports and the majority of government revenue. Yet Venezuela went into recession in 2014, when oil was still more than $100 a barrel. Policy failures, not an oil shock, precipitated the country’s financial decline. But the response to the oil-price collapse, especially maintaining the economically deadly exchange-rate system, ensured prolonged catastrophe.

The only way out of this mess is to let the currency float and allow it to reach an equilibrium. When it has hit bottom, we would expect that much of the savings that Venezuelans have in dollars, mostly abroad, would come back, because everything is cheap in dollar terms and they would know that the exchange rate has stabilized. This is what happened in Argentina after it floated its currency, resulting in a large devaluation, at the beginning of 2002. In Venezuela’s case, stabilizing the currency would put an end to the inflation-depreciation spiral, and eliminate the black market for the dollar altogether.

This exchange rate, however, is not the only adjustment in relative prices that the economy would need. There are many dysfunctional price controls that have not worked and should be removed. By 2015, for example, inflation was 180 percent annually, but food prices, which were subject to price controls, greatly surpassed that. And billions of dollars of subsidized food were going over the border to Colombia.

The government’s subsidies to domestic energy, including electricity and gasoline, would also have to be reduced over time. Right now these handouts are about as big a share of the economy as total income tax collection is in the United States. This money could be used to directly subsidize food for consumers.

But with Trump’s executive order, even if Venezuela were to stabilize the exchange rate and return to growth, it would be cut off from borrowing, investment, and proprietary sources of income such as dividend payments from Venezuela-owned but US-based Citgo Petroleum. This makes a sustained recovery nearly impossible without outside help—or a new government that is approved by the Trump administration.

The sanctions also push the country toward default, which would cause a new set of severe financial problems, including the potential seizure of Venezuela’s international oil assets and a drastic drop of the price of the country’s oil.

The sanctions also prevent recovery by making debt restructuring impossible. Debt restructuring would give Venezuela some breathing room, as it would involve a voluntary agreement with creditors to postpone current payments in exchange for new bonds. But the Trump executive order prohibits US financial institutions and individuals from participating in these bond issues.

If we step back and look at Venezuela from a bird’s-eye view, how does a country with 500 billion barrels of oil and hundreds of billions of dollars’ worth of minerals in the ground go broke? The only way that can happen is if the country is cut off from the international financial system. Otherwise, Venezuela could sell or even collateralize some of its resources in order to get the necessary dollars. The $7.7 billion in gold held in Central Bank reserves could be quickly collateralized for a loan; in past years, the US Treasury department used its clout to make sure that banks who wanted to finance a swap, such as JPMorgan Chase and Bank of America, did not do so.

Venezuela was already mostly prevented from accessing international bond markets before Trump’s executive order, but this was not irreversible. If the Venezuelan government made some reforms and the economy began to recover, they could begin to access financial markets again. And, as recently as last year, a restructuring of the debt was nearly concluded that would have deferred billions of dollars of debt payments and opened the way to new borrowing. Now Venezuela is blocked from international financial markets as long as Trump or his successor wants it to be.

What can be done? Now that the Trump administration has made an open and firm commitment to regime change through the destruction of an already debilitated Venezuelan economy, it seems clear that Venezuela will have to seek outside help in order to survive. So far, no governments other than Trump’s have expressed support for these sanctions, and, with the largest economy in the world, China is best placed to come to Venezuela’s aid.

China issued a strong statement against Trump’s latest prohibitions. China supported the latest UN Security Council sanctions against North Korea in August, which were led by the US government. But, as does most of the rest of the world, China likely understands that the sanctions against Venezuela are a transparent attempt to overthrow a sovereign government. After all, Washington has been trying to oust the Venezuelan government for more than 15 years, including supporting the 2002 military coup that briefly toppled Hugo Chávez and providing hundreds of millions of dollars to opposition groups since then.

China has over $3 trillion in reserves and has loaned tens of billions of dollars to Venezuela—most of which has been repaid with the outstanding amount to be reimbursed in oil shipments. There is no way to know what Beijing would be willing to do to help, but the Venezuelan government should approach them with an economic plan that could provide some assurances that their money would not be wasted. This proposition should include the basic reforms necessary to stabilize the exchange rate and inflation. The Chinese are famously reluctant to tell a sovereign government what their economic policies should be, and they won’t put such conditions on any loans or investment—unlike the US government or the US-dominated IMF and World Bank. But China may be more likely to assist Venezuela if it is presented with a sensible recovery plan. It would also be smart for Venezuela to approach the Chinese Communist Party, since it influences government decisions and has sometimes shown more solidarity with other leftist parties and governments.

Countering Trump’s illegal (under US as well as international law) sanctions would be beneficial for all Venezuelans. In terms of immediate effects, any aid that relieved shortages of food and medicines would be important. But Chinese loans and aid could also help lead to a negotiated solution. Although neither the Venezuelan opposition nor the government made substantial concessions during talks last fall, there is little incentive for the opposition to negotiate so long as it can count on continued economic deterioration. A recovering economy would restore that incentive for the opposition.

China has its own national interests in not wanting all of South America to be dominated by the US government again—as it was in the last century—let alone an administration that is headed by an increasingly aggressive, volatile, and disturbed president. But in this case its interests coincide with the general interest of the world, in which national sovereignty is an important, hard-won right. And as Trump looks around the world for possible military action to save his doomed presidency, the American people also have an interest in anything that can help resolve a conflict that he has already announced as a possible military target.

Most of the foreign-policy establishment and media in the United States cannot understand this, since they see the world through the lens of US power, much as they did during the Cold War; they have an exaggerated sense of American importance, capacity, and benevolence; and they do not care much about the self-determination of other nations. This leads them toward violently destructive mistakes, as in Iraq, Afghanistan, Syria, and Libya. Their support for regime change in Venezuela is one of those mistakes.

Venezuela is a polarized country, and the conflict will almost certainly need a negotiated solution if a civil war is to be avoided. International mediation from a group of parties accepted by both sides can help; and neutral, ethical actors such as Pope Francis, who has repeatedly called for dialogue, can play a vital role. But Venezuela’s future must be decided by Venezuelans, preferably through democratic elections. It should not be decided by Donald Trump.