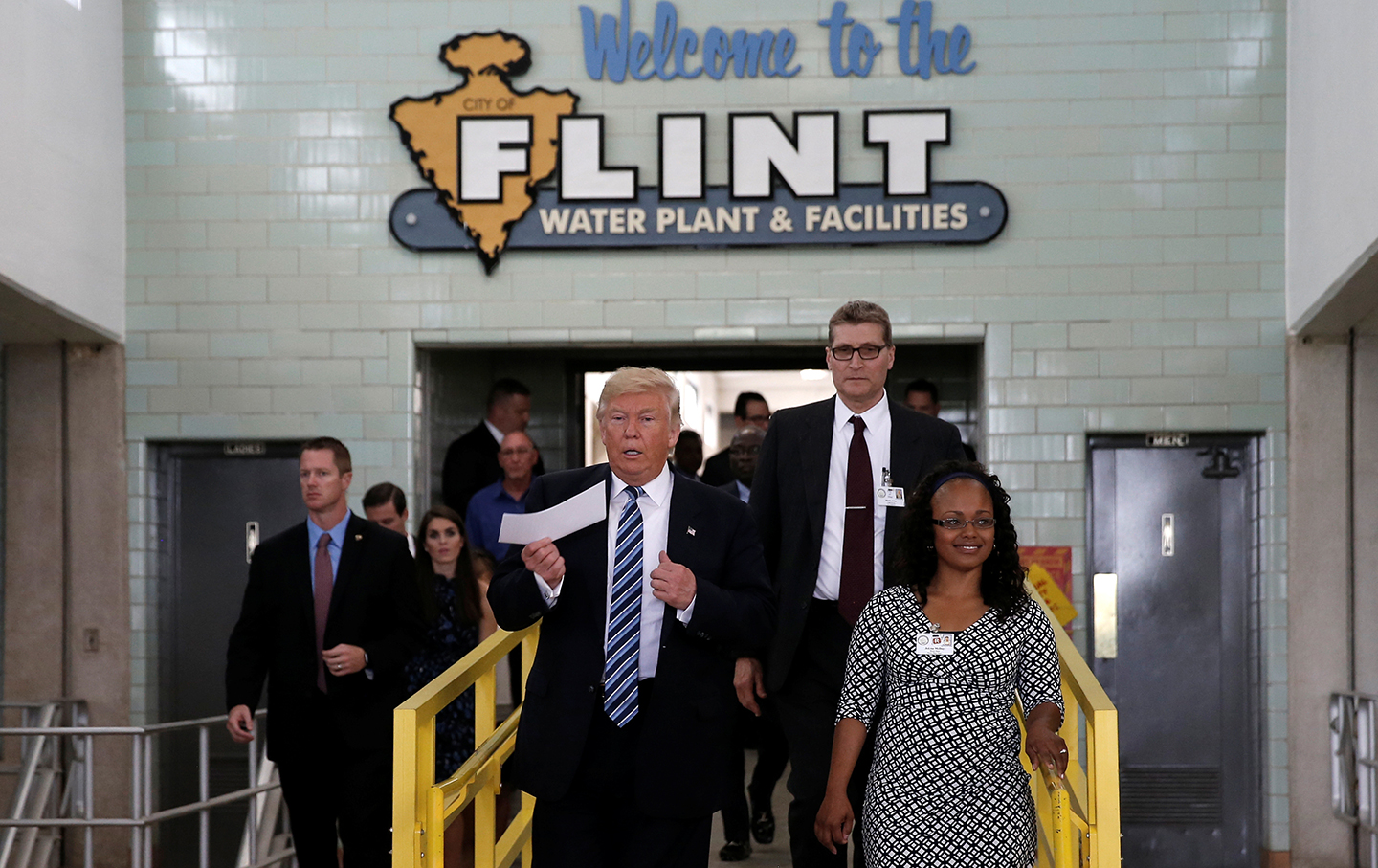 You might be getting a whiff of something rotten in Washington, but a worse stench might soon waft into your neighborhood as President Trump moves to slash regulations that protect our air and water from polluters.

The aptly titled Searching for and Cutting Regulations that are Unnecessarily Burdensome (SCRUB) Act, proposed by Representative Jason Smith of Missouri with support from the White House, would create a new arm of government to comb federal agencies for regulations deemed to be “obsolete,” or rather, unfairly inhibiting profits.

SCRUB would essentially allow politicians to “review” regulations through a purely economic cost-benefit analysis: If the Environmental Protection Agency issues a standard for particulate emissions for example, SCRUB would force the government to assess the rule based not so much on how it might save children’s lives, reduce lost days of work or school productivity, or keep fish from dying in local streams—but, rather, on how the regulation would affect business.

“What the House is trying to do under this cloak of regulatory reform,” says Paul Billings, senior vice president of Advocacy with American Lung Association, “is attack a public-health statute’s function and try to undermine the ways in which federal agencies implement those laws to provide, for example, the clean-air safeguards the American people are counting on and expect.”

And invariably, business interests don’t line up with the value of a clean habitat, so if SCRUB passes, Congress gets a blank check to erase the rules and directives needed to implement federal statutes, which in turn would cripple federal authorities’ partnerships with local agencies in monitoring, coordinating, and controlling pollution on the community and regional levels.

Nationwide, people of color are 40 percent more exposed to smog pollution than whites.

“Taken to its absurd end, [this bill says] you can’t have cleaner air if you want cleaner water. You have to repeal the clean air rule to promulgate a clean-water rule,” Billings says. Needless to say, the benefits of both breathing and drinking without being poisoned are cumulative.

Although cost-benefit analysis is not novel in anti-regulatory rhetoric, the SCRUB formula takes the system even further, first by creating a so-called “cut-go” framework, which mandates that a new regulation be “offset” economically by repealing a rule of equal “cost.” Basically, net spending has to be zero in a world where corporate polluters impose ever-expanding social costs on communities. Robert Weissman of Public Citizen, in a letter to Congress on SCRUB, questioned this supposed “balancing” of industrial harms:

Under this proposal if new evidence finds that another substance widely used in commerce today is harmful to infants, regulators would have to find some other protection, which still needs to be enforced, to cut before protecting young children. This one-size-fits-all approach is short-sighted and ties the hands of agency staff when public health crises or new threats arise.

An even broader SCRUB-type anti-regulatory assault, the Regulatory Accountability Act, has already passed the House and now awaits Senate consideration. The measure would facilitate the wholesale repeal of public-interest rules that are, in the most recent version, projected to cost the economy $100 million or more annually. The business cost, in flat financial terms, would trigger a review process that critics say gives politicians outsized power to preempt federal rulemaking via “paralysis by analysis,” gumming up the works to block agencies from inhibiting industrial production. This undermines a longstanding legal precedent of deferring to agency expertise to determine how federal laws are implemented in regulators’ day-to-day operations.

Trump, meanwhile, has already used his executive pen to issue an array of paralyzing administrative orders, including a blanket freeze on rule making, along with a “review,” essentially a dismantling, of a longstanding restriction on dumping coal-mine waste in local waterways. Echoing the Republicans’ net-zero-regulation mentality, he has ordered that every new regulation must be offset by the repeal of two existing regulations. How this would be realistically implemented remains mysterious, but according to Trump the aim is “cutting regulations massively for small business and for large business,” because it’s supposedly “virtually impossible to expand your existing business because of regulations.”

The war on regulations might also be aggravated by the destruction of public-health protections through the repeal of the Affordable Care Act and Trump’s plan to defund the prevention-research arm of the Centers for Disease Control, both of which provide key research and treatment resources to help poor communities deal with the disparate health impacts of pollution and toxic emissions.

According to the American Lung Association, most Americans “live in counties that have unhealthful levels of either ozone or particle pollution.” People of color are over 40 percent more exposed to smog (nitrogen dioxide) than whites. Poor communities of color are also more exposed to industrial disasters, like the poisoned water of the majority-black city of Flint, Michigan, and the toxin-steeped mining towns of Appalachia.

Not even Trump’s regulators like regulation. Before becoming EPA chief, Scott Pruitt tried to undermine his own agency through lawsuits as Oklahoma attorney general. The agency’s pending staff cuts will exacerbate existing environmental inequities in regulatory protection. A recent report by the US Civil Rights Commission found that the EPA even under Obama was failing to uphold environmental-justice policies guaranteed by the Civil Rights Act, noting that although they were entitled to legal recourse under federal civil-rights law, communities “often lack political and financial clout to properly bargain with polluters when fighting a decision or seeking redress.”

The real-life impacts of acute and chronic environmental exposures, Billings argues, show why regulators’ analytical predictions are unrealistic and overestimate compliance costs: First, there could be future innovation of more efficient technologies, as “cheaper compliance pathways emerge because there’s investment and attention to providing the most efficient and least cost[ly] way to comply.” Moreover, federal agencies like the EPA are the only authorities that can assess and curb carbon pollution cumulatively, across regions and in a global context. And some community-level benefits are immeasurable: “Like the cost of avoiding an asthma episode might be deemed to be $40. Well, I can assure you if it’s my child struggling to breathe, it’s worth a lot more to me and to my child to avoid an asthma attack.”

Trump’s right that regulations exact a price. But the short-term calculations of big business to put a market rate on a public good are always regressive, and the ultimate price is paid through the sickened bodies of those who can least afford the burden.