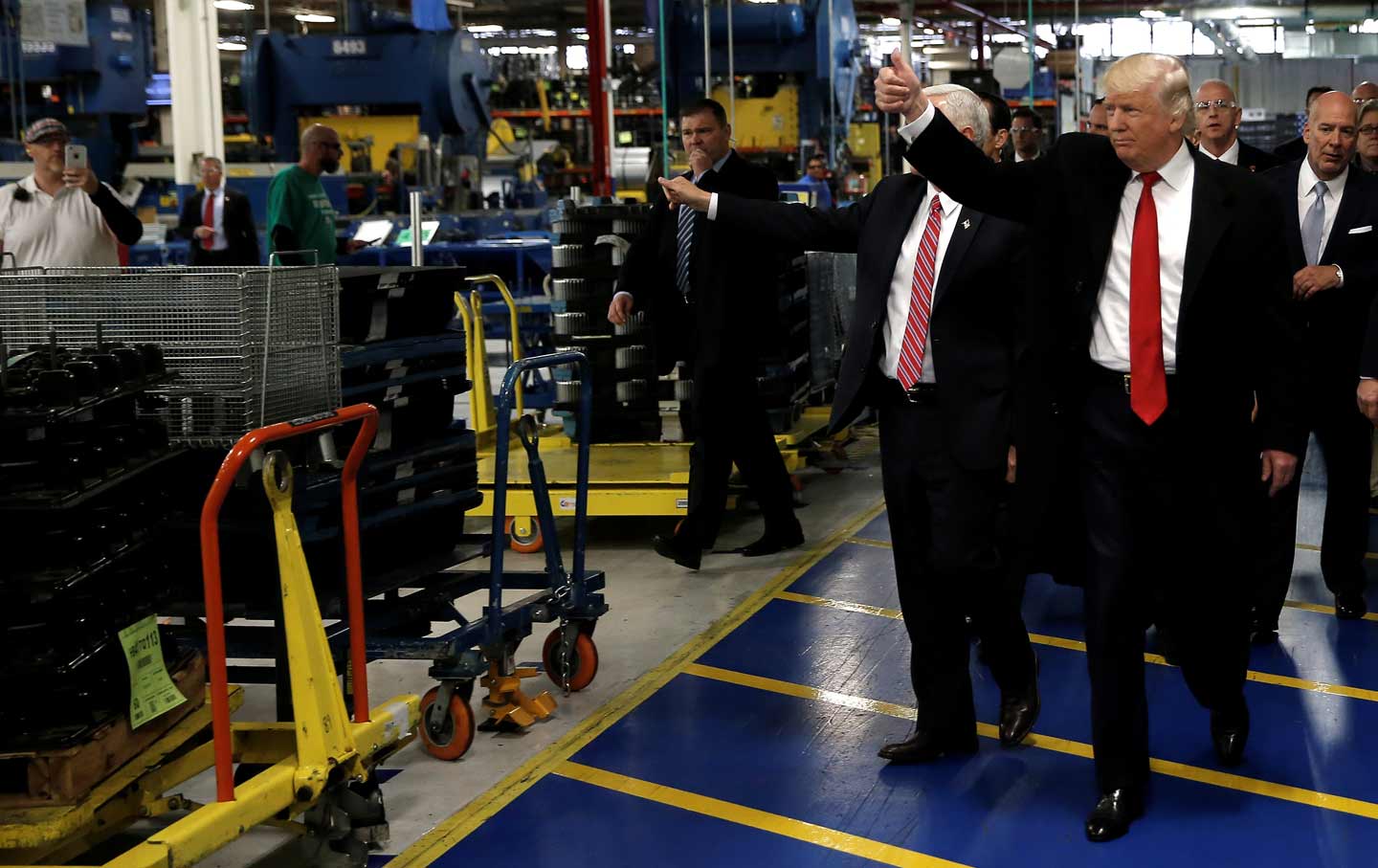 Donald Trump barreled into the White House with a “terrific” plan for infrastructure, and Washington is abuzz with a seemingly “bipartisan” job-creation initiative. Though the GOP-dominated Congress has for years thwarted similar infrastructure-based stimulus proposals, fiscal conservatives in Washington and market profiteers nationwide are now fully confident in Trump’s vision for shovel-ready business partnerships.

After all, the one competency Trump has demonstrated so far seems to be making money off of building stuff, from casinos and golf courses to his promised Mexican border wall.

But the public project of fixing America’s crumbling bridges and highways is a different animal than Trump’s private real-estate empire of gleaming glass towers, at least for now.

Trump wants private investors to basically direct $1 trillion in infrastructure projects nationwide through a “revenue neutral” financing plan, which banks on financing from private investors, allegedly to control deficit spending (which the GOP generally deems wasteful, while promoting tax breaks as a wiser redistribution of public funds into corporate coffers). To draw some $167 billion to jumpstart the $1 trillion, 10-year infrastructure plan, Washington would grant a giant tax break “equal to 82 percent of the equity amount.” The goal isn’t fixing bridges so much as fixing the corporate tax codes to promote privatization and unregulated construction with virtually no public input. Moreover, whereas effective stimulus plans aim to fill infrastructure gaps that big business has ignored, Mike Konzcal observes in The Washington Post, that the developers Trump is courting would follow the money and “back profitable construction projects. These projects (such as electrical grid modernization or energy pipeline expansion) might already be planned or even underway.”

Dave Dayen calls the program a “privatization fire sale” that ensured that private, not common, interests determine where funding is focused.

Trump is further sweetening the pot by promising drastic deregulation that would “provide maximum flexibility to the states” and “streamline permitting and approvals.”

The details of Trump’s infrastructure vision are fairly sparse, summarized in a cheerleading 10-page pre-election analysis. But the author byline is telling: right-wing business professor Peter Navarro and private equity mogul Wilbur Ross (Trump’s pick for commerce secretary, with historic links to the Sago mine accident scandal). And Trump’s own investment track record speaks volumes: The president-elect is facing allegations of major wage violations involving his latest project site, which is sited on federal property, an antique Post Office to be transformed, in Trump’s words, into “truly one of the great hotels of the world.”

It hasn’t been so great for the non-union subcontracted construction workers who have complained of getting paid below the wage standard that should apply under the federal Davis Bacon Act. Vice President–elect Mike Pence, meanwhile, has actively pushed to repeal his state’s similar prevailing wage laws for publicly contracted workers.

Trump may have previewed his approach to publicly funded construction with his glamorous Bronx golf course on a 192-acre landfill site, using public money to reclaim a wasteland for the benefit of wealthy golfers, charging the highest fees of any other city golf grounds. Not only did it colonize a tract of a borough starved for community recreational spaces and affordable housing, it also produced a mere 100 local jobs and, according to community advocates, little additional economic activity in the surrounding neighborhood.

In the Public Interest (ITPI) observed in a recent report on abuses of private contractors:

To maximize profit, companies have often cut corners by reducing the quality and accessibility of services, reducing staffing levels, lowering worker wages, and sidestepping protections for the public and the environment.

“[T]he bottom line is that they will strip away standards, provide hefty subsidies and guaranteed profits and hand over control over large scale projects for decades,” according to ITPI executive director Donald Cohen.

The overarching drive to privatize resources and services, meanwhile, might not only fail to solve infrastructure problems but might also disrupt the structure of democracy; the process of, for example, privatizing a highway or contracting out a public utility, in the long-term, effectively outsources governance. “With control comes hidden information,” Cohen adds. Institutionalizing opacity in government-funded ventures could give corporations free reign to decide unilaterally on electricity rates or easements on tribal lands.

There is no doubt that infrastructure investment is still crucial. However, a more progressive approach would aim to bring more social equity into the private sector, not more profit motives into government budgets.

An alternative, progressive infrastructure proposal, penned by Senator Bernie Sanders, would operate on a similar scale as Trump’s, with $1 trillion over five years. But instead of handing a blank check to contractors, the budget would prioritize the critical infrastructure needs identified by engineering authorities, and support stimulus through workers’ wages rather than corporate financing.

Such a plan could also be used to direct investment toward green energy development, expanding public Wi-Fi networks, or increasing wage standards. While legislation to mandate these types of projects and standards was continually stonewalled in the GOP-controlled congress, Obama did manage, through a series of precedent-setting executive actions, to raise the minimum wage for subcontracted federal workers, expand anti-discrimination protections, and to penalize subcontractors who have failed to comply with regulations. Those initiatives may disappear as the new administration takes over in January. Given that Trump has previously blown off crucial policy priorities like the Paris Climate Change Treaty, there’s no reason why his infrastructure plan should reflect pro-worker interests.

If Trump is serious about rebuilding the country, his infrastructure program will both expose his underlying kleptocratic motives and offer community and labor organizations an opportunity to hold his administration accountable for spending responsibly.

Trump has big plans to make taxpayers and workers pay for his big gamble; the public has a lot on the line, but also a chance to reclaim the public trust.