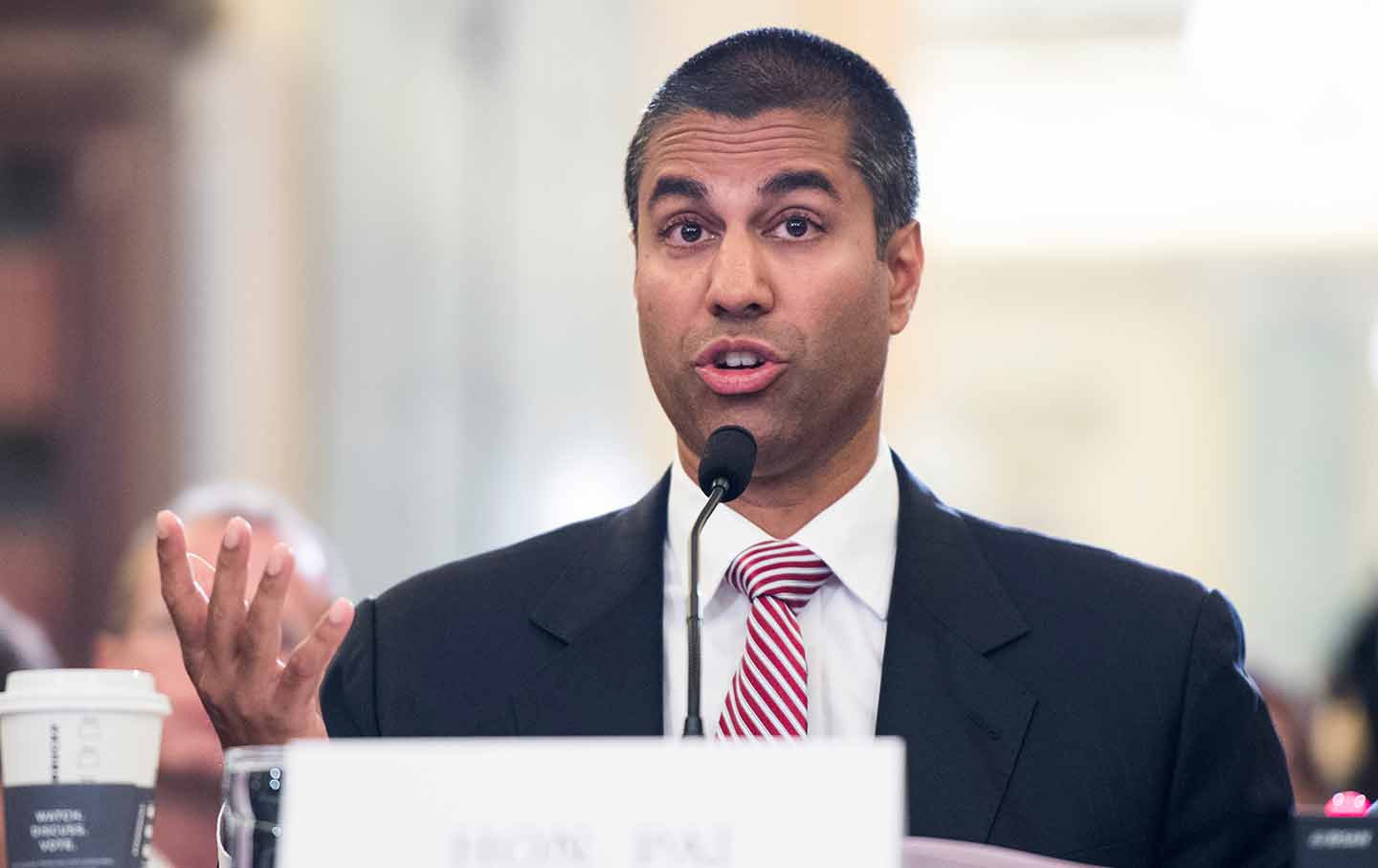 No act of the recklessly authoritarian Trump administration poses a greater threat to the democratic discourse than the now-announced plan to gut net-neutrality rules. With newspapers dying, radio syndicated, broadcast television commercialized beyond relevance, and cable television mired in scandal and dead-end punditry, the Internet is the essential tool for the communication of ideas and the mobilization of those who choose to resist the autocratic impulses of Trump and his crony-capitalist cabal.

So it should come as no surprise that Trump and his Federal Communications Commission chairman, Ajit Pai, wants to throttle net neutrality—the First Amendment of the Internet that guarantees equal protection for all voices in the digital universe where we now live. At a closed-door meeting in Washington Wednesday, Pai outlined what The New York Times described as “a sweeping plan to loosen the government’s oversight of high-speed internet providers, a rebuke of a landmark policy approved two years ago to ensure that all online content is treated the same by the companies that deliver broadband service to Americans.”

Former FCC Commissioner Michael Copps warned that, “By reopening the FCC’s historic 2015 Open Internet Order, the FCC is jeopardizing core protections for online free speech and competition. Chairman Pai appears more interested in currying favor with cable and telecom industry lobbyists than in serving the millions of Americans who wrote and called to urge the commission, during the original rule-making, to provide strong protections against online blocking, throttling, or censorship.”

“Chairman Pai is kissing the ring of the Big Money lobbyists who too often call the shots in the Trump Administration,” declared Copps, who now works with Common Cause and other groups seeking to defend an open Internet. “Ending net neutrality would be a body blow to the open dialogue upon which successful self-government depends. It would be a red light for democracy and a green light for cable and telecom giants to control where we go and what we do on the internet.”

Gutting net neutrality hurts an American experiment that cannot function without the free flow of ideas.

Yet there can be no question the Trump administration is preparing to deliver that body blow. Experts and activists agree what the change Trump’s man at the FCC proposes would “dismantle the legal framework essential to maintaining Net Neutrality…[and] try to replace the FCC’s rules with voluntary agreements by internet service providers [that] have a long history of undermining the open internet.” Under the Pai plan, the Times explains, “high-speed internet service should no longer be treated like a public utility with strict rules, as it is now. Instead, he said, the industry should largely be left to police itself.”

That may be good for the bottom lines of old-fashioned telecommunications corporations. But that’s no good for 21st-century discourse or democracy.

“FCC Chairman Ajit Pai is determined to give control of the internet to companies like Comcast, AT&T and Verizon, no matter the cost to our economy and democracy,” says Craig Aaron, the president of the media reform group Free Press. “He’s continuing to ignore the mountains of evidence showing that the agency’s Net Neutrality rules are protecting internet users while spurring on investment and innovation.”

There has been no serious or sincere popular outcry for eliminating net neutrality from consumers or from honest advocates for innovation. Nor has the 2015 Open Internet Order—which used Title II of the federal Communications Act as a basis for outlining obligations for carriers that provide Internet access—stifled innovation or investment. “According to publicly available Securities and Exchange Commission filings, overall investment by the nation’s publicly traded internet service providers is up 5 percent in the two-year period since the FCC ruling, compared to their investment over the two years prior to the vote. Individual ISPs like Comcast spent 26 percent more on capital expenditures in that time period than in the two years prior. Cable company core network investments are up almost 50 percent in that two-year period. This figure includes new deployment and upgrades to networks but doesn’t count additional expenditures on infrastructure like cable boxes, cable modems, service trucks and buildings,” notes a Free Press assessment of the digital landscape.

“The industry’s actual investments and deployments, as well as its executives’ own statements to investors on how the rules haven’t harmed their businesses in the slightest, are more informative than Pai’s ideology-driven fantasies,” argues Matt Wood, the policy director of the group that this writer and others formed 15 years ago.

Unfortunately, the fantasies that motivate the Trump administration in general, and Pai in particular, are those of essentially unlimited profiteering by politically connected corporations.

Gutting net neutrality, as Pai proposes, opens the way for telecommunications giants to colonize the Internet in the same way that they have done to broadcast and cable platforms—replacing civic and democratic values with commercial and entertainment dictates. Despite claims made to the contrary, if Trump and Pai succeed, the United States will end up with an “information superhighway” for messages favored by corporate elites who can pay the tolls and a dirt road for messages from citizens who hold to the quaint American faith that human beings should have rights and corporations should have regulations.

“It makes no sense,” says Massachusetts Senator Ed Markey, a longtime advocate for an open Internet. “We cannot keep the promise of net neutrality openness and freedom without the rules that ensure it.”

Markey is right. An assault on net neutrality is an assault on an American experiment that does not function without the free flow of ideas, and without easy access to those ideas for people of every class and of every background. Undermining net neutrality poses an even greater threat to those who have historically faced social, economic, and political barriers.

“Chairman Pai’s plan to gut the FCC’s net neutrality rules will devastate Black communities,” says Rashad Robinson, the executive director of Color Of Change, the civil-rights group that played a vital role in securing the FCC’s embrace of genuine net neutrality in 2015. “Net neutrality is essential to protecting our free and open Internet, which has been crucial to today’s fights for civil rights and equality. Our ability to have our voices heard in this democracy depends on an open Internet because it allows voices and ideas to spread based on substance, rather than financial backing. Net neutrality helps to ensure that the Internet is a place for innovation and opportunity for all, rather than just the wealthy few.”

The crony-capitalist scheming of Trump, Pai, and their corporate compatriots is so transparent that Vice’s Motherboard site is already anticipating an “epic fight” over the plan to kill net neutrality. Gene Kimmelman, the president of the Public Knowledge policy group, says: “We’re in for a big fight here.”

It had better be. Pai plans to move quickly, with essential deliberations on his plan coming perhaps as soon May 18. So this is an all-hands-on-deck moment for every American who recognizes that the defense of net neutrality is an essential struggle for First Amendment rights in the 21st century.

“Chairman Pai has now joined the chorus of Republicans in Washington who have signed onto Donald Trump’s corporate attack on our freedoms. But we won’t go down without a fight,” says Color of Change’s Robinson. “Heading into the FCC’s May 18 meeting, we’re going to demand that our communities’ access to the Internet is protected. This is an attack on 21st century civil rights, and we are committed to defending them.”