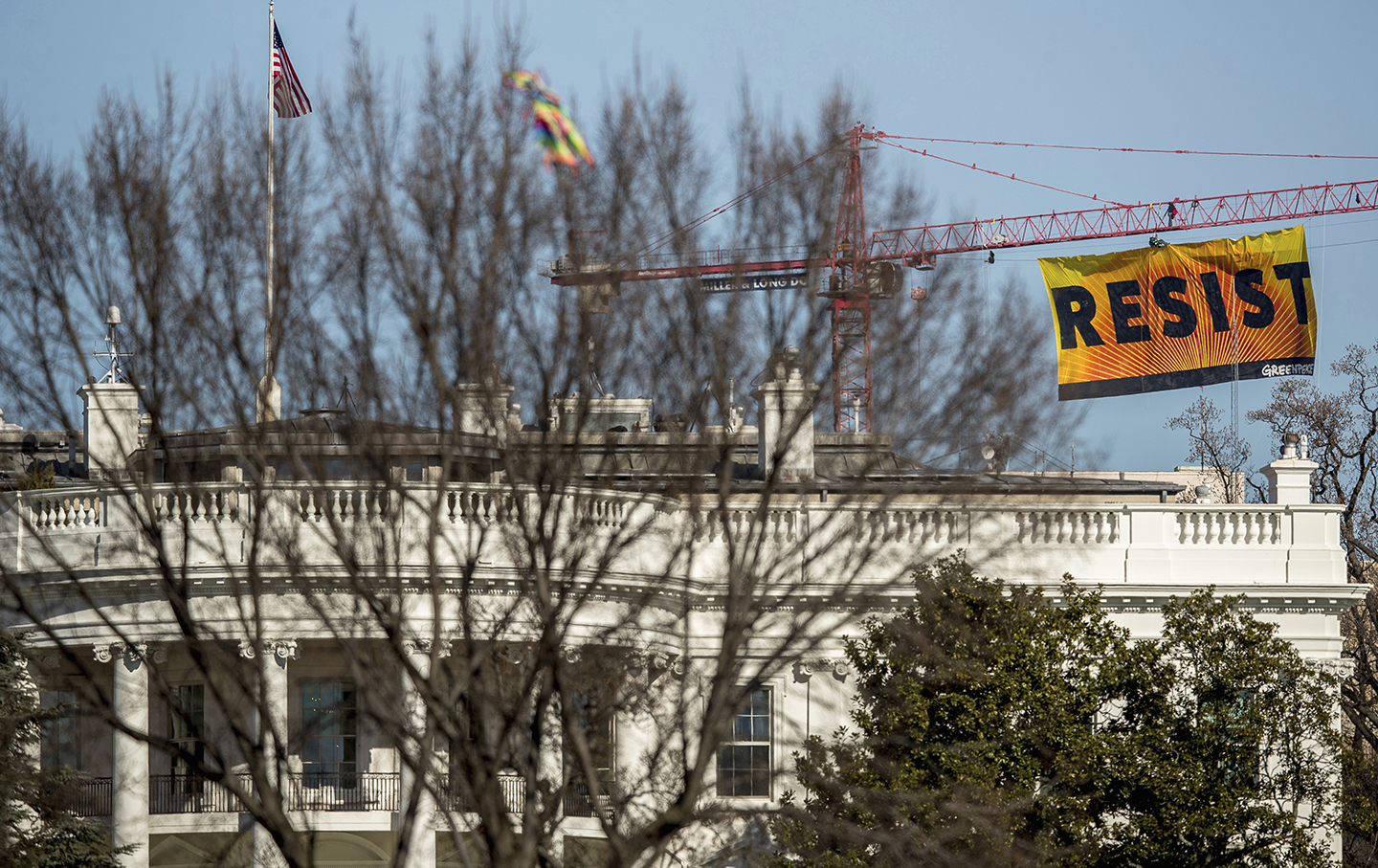 Greenpeace protesters unfurl a banner that reads "Resist" at the construction site of the former Washington Post building, near the White House in Washington, Wednesday, January 25, 2017. (AP Photo / Andrew Harnik)

Let’s zoom out and recognize what is happening in Washington right now. The people who already possess an absolutely obscene share of the planet’s wealth, and whose share grows greater year after year—at last count, eight men own as much as half the world—are determined to grab still more. The key figures populating Donald Trump’s cabinet are not only ultra-rich—they are individuals who made their money knowingly causing harm to the most vulnerable people on this planet, and to the planet itself. It appears to be some sort of job requirement.

This article is adapted from several speeches given over Inauguration weekend.

There’s junk-banker Steve Mnuchin, Trump’s pick for Treasury secretary, whose lawless “foreclosure machine” kicked tens of thousands of people out of their homes.

And from junk mortgages to junk food, there’s Trump’s pick for labor secretary, Andrew Puzder. As CEO of his fast-food empire, it wasn’t enough to pay workers an abusive, non-livable wage. Several lawsuits also accuse his company of stealing workers’ wages by failing to pay for their labor and overtime.

And moving from junk food to junk science, there is Trump’s pick for secretary of state, Rex Tillerson. As an executive and then CEO of Exxon, his company bankrolled and amplified garbage science and lobbied fiercely against meaningful international climate action behind the scenes. In no small part because of these efforts, the world lost decades when we should have been kicking our fossil-fuel habit, and instead vastly accelerated the climate crisis. Because of these choices, countless people on this planet are already losing their homes to storms and rising seas, already losing their lives in heat waves and droughts, and millions will ultimately see their homelands disappear beneath the waves. As usual, the people impacted worst and first are the poorest, overwhelmingly black and brown.

But the popular backlash was mounting. Which is precisely why this gang of CEOs—and the sectors they come from—were rightly worried that the party was coming to an end. They were scared. Bankers like Mnuchin remember the 2008 financial collapse and the open talk of bank nationalization. They witnessed the rise of Occupy and then the resonance of Bernie Sanders’s anti-bank message on the campaign trail.

Service sector bosses like Andrew Puzder are terrified of the rising power of the Fight for $15, which has been winning victories in cities and states across the country. And had Bernie won what was a surprisingly close primary, the campaign could well have had a champion in the White House. Imagine how frightening this is to a sector that relies on workplace exploitation so centrally to keep prices down and profits up.

And no one has more reason to fear ascendant social movements than Tillerson. Because of the rising power of the global climate movement, Exxon is under fire on every front. Pipelines carrying its oil are being blocked not just in the United States but around the world. Divestment campaigns are spreading like wildfire, causing market uncertainty. And over the past year, Exxon’s various deceptions came under investigation by the SEC and multiple state attorneys general. Make no mistake: The threat to Exxon posed by climate action is existential. The temperature targets in the Paris climate deal are wholly incompatible with burning the carbon companies like Exxon have in their reserves, the source of their market valuation. That’s why Exxon’s own shareholders were asking increasingly tough questions about whether they were on the verge of being stuck with a whole bunch of useless assets.

This is the backdrop for Trump’s rise to power—our movements were starting to win. I’m not saying that they were strong enough. They weren’t. I’m not saying we were united enough. We weren’t. But something was most definitely shifting. And rather than risk the possibility of further progress, this gang of fossil-fuel mouthpieces, junk-food peddlers, and predatory lenders have come together to take over the government and protect their ill-gotten wealth.

Let us be clear: This is not a peaceful transition of power. It’s a corporate takeover. The interests that have long-since paid off both major parties to do their bidding have decided they are tired of playing the game. Apparently, all that wining and dining of politicians, all that cajoling and legalized bribery, insulted their sense of divine entitlement.

So now they are cutting out the middleman and doing what every top dog does when they want something done right—they are doing it themselves. Exxon for secretary of state. Hardee’s for secretary of labor. General Dynamics for secretary of defense. And the Goldman guys for pretty much everything that’s left. After decades of privatizing the state in bits and pieces, they decided to just go for the government itself. Neoliberalism’s final frontier. That’s why Trump and his appointees are laughing at the feeble objections over conflicts of interest—the whole thing is a conflict of interest, that’s the whole point.

So what do we do about it? First, we always remember their weaknesses, even as they exercise raw power. The reason the mask has fallen off, and we now are witnessing undisguised corporate rule is not because these corporations felt all-powerful; it’s because they were panicked.

Moreover, a majority of Americans did not vote for Trump. Forty percent stayed home, and of the people who voted a clear majority voted for Hillary Clinton. He won within a very rigged system. Even within this system, he didn’t win it, Clinton and the Democratic Party establishment lost it. Trump didn’t win with overwhelming excitement and big numbers. He won because Hillary had depressed numbers and a lack of enthusiasm. The Democratic Party establishment did not think campaigning on tangible improvements to people’s lives was important. They had virtually nothing to offer to people whose lives have been decimated by neoliberal attacks. They thought they could run on fear of Trump, and it didn’t work.

Here’s the good news: All this makes Donald Trump incredibly vulnerable. This is the guy who came to power telling the boldest and brashest of lies, selling himself as a champion of the working man who would finally stand up to corporate power and influence in Washington. A portion of his base already has buyer’s remorse, and that portion is just going to grow.

Something else we have going for us? This administration is going to come after everyone at once. There are reports of a shock-and-awe budget that will cut $10 trillion over 10 years, taking a chainsaw to everything from violence-against-women programs, to arts programs, to supports for renewable energy, to community policing. It’s clear that they think this blitzkrieg strategy will overwhelm us. But they may be surprised—it could well unite us in common cause. And if the scale of the women’s marches is any indication, we are off to a good start.

Building sturdy coalitions in a time of siloed politics is hard work. There are painful histories that have to be confronted before progress is possible. And foundation funding and activist celebrity culture tend to pit people and movements against one another rather than encourage collaboration. Yet the difficulties cannot give way to despair. To quote a popular saying on the French left, “The hour calls for optimism; we’ll save pessimism for better times.” (“L’heure est à l’optimisme, laissons le pessimisme pour des temps meilleurs.”)

Personally, I can’t quite muster optimism. But in this moment when everything is on the line, we can, and we must, locate our most unshakable resolve.