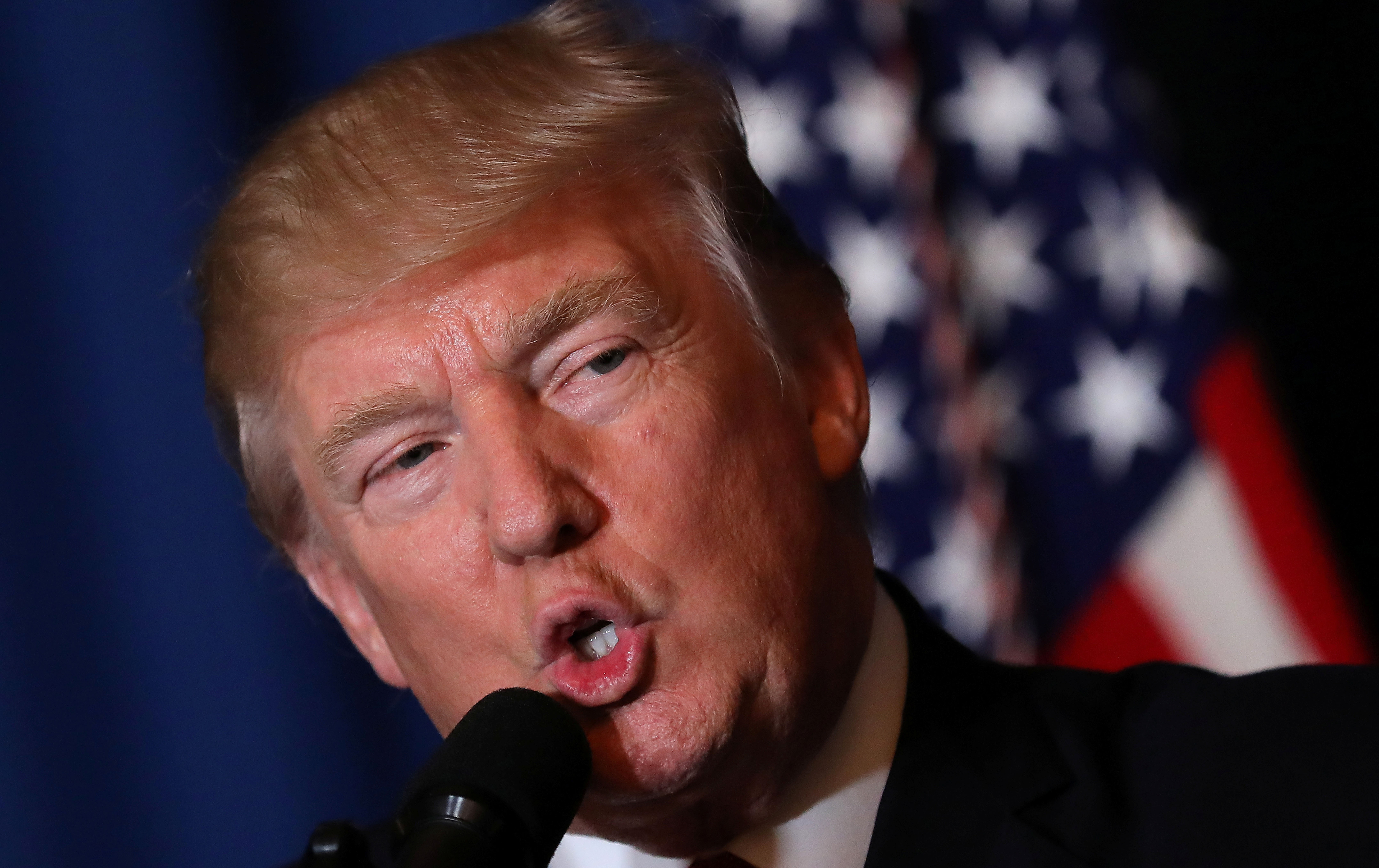 President Donald Trump delivers a statement about missile strikes on a Syrian airfield, at his Mar-a-Lago estate. (REUTERS / Carlos Barria)

President Trump’s decision to launch an air strike on the Al Shayrat airfield in Syria confirms what had been only too obvious in recent weeks, that Trump, far from representing a clean break with the regnant foreign policy orthodoxy of endless military intervention in the Greater Middle East, has instead become captive to it.

This can hardly come as a surprise given the fact that he stacked his Cabinet with hardline Iran obsessives like the former alt-right media guru Stephen K. Bannon, former generals James Mattis and H.R. McMaster, and former South Carolina governor Nikki Haley. The chemical-weapons attack in the rebel-occupied town of Khan Sheikhun on Tuesday was nothing if not a perfect pretext for yet another round of American muscle flexing, all the better to, as the punditocracy never tires of saying, “send a message” to Tehran by way of Syria.

And for his efforts, Trump has suddenly become an object of praise by the US foreign-policy establishment, which never tires equating “seriousness” with unilateral acts of war on sovereign nations. This morning, that barometer of establishment opinion, Fareed Zakaria, gushed, “I think Donald Trump became President of the United States, I think this was a big moment.”

Trump’s decision to fire 60 or so Tomahawk missiles on the Syrian airbase also upends the conventional narrative, as widely accepted as it is mistaken, that Trump is little more than a pawn of Russian President Vladimir Putin. But, as perhaps Washington’s most incisive critic of regime-change wars, Hawaii Congresswoman Tulsi Gabbard, remarked in a statement last night, “This escalation is short-sighted and will lead to more dead civilians, more refugees, the strengthening of Al Qaeda and other terrorists, and a possible nuclear war between the United States and Russia.”

And the reaction from Moscow was swift, with the Kremlin calling the air strikes an “aggression against a sovereign state in violation of international law.” Russia quickly moved to suspend an intelligence-sharing agreement with the US in Syria. Kremlin spokesman Dmitri S. Peskov explained, “Amid the missile strikes, it is hardly reasonable to talk about any more increase in the risk, as the risk has increased considerably.” Peskov also noted, “Most important, from Putin’s point of view, this move doesn’t bring us closer to the end goal in a fight against international terrorism.”

But what it may do is insulate Trump from some of the partisan Russia frenzy that has haunted his administration from the very start. Sacrificing a functional relationship with the Russians, in Trump’s calculus, might be a small price to pay in order to bring the Democrats and the neocons of his own party to heel.

And that already seems to be happening.

On MSNBC last night, The Washington Post’s Jennifer Rubin, who had been a fierce critic of Trump during the campaign, exhorted her fellow panelists to rally round the president, while arch neocon Max Boot was moved to tweet, “Have to give Democrats credit for supporting Trump strike on Assad.”

Striking Assad, of course, had long been on the agenda of the bipartisan war party, whose hopes were temporarily dashed when its titular head, Hillary Clinton, lost to Trump last November. But the war party, like Clinton herself, has reemerged. At an event in New York on Thursday, Clinton urged the administration to attack Syria, saying, “Assad had an air force, and that air force is the cause of most of the civilian deaths, as we have seen over the years and as we saw again in the last few days.” “And I really believe,” she continued, “that we should have and still should take out his airfields and prevent him from being able to use them to bomb innocent people and drop sarin gas on them.”

And while one wouldn’t know it from Trump’s actions or Clinton’s remarks, the UN has yet to come to a definitive conclusion regarding the provenance of the chemical-weapons attack. An account of the UN Security Council’s April 5 meeting noted that Kim Won-Soo, the UN High Representative for Disarmament Affairs “said information on the reported 4 April use of chemical weapons in Khan Shaykhun, in Syria’s Idlib Governorate, was still coming in” and that “the attack had reportedly been carried out through an air strike on a residential area, but the means of delivery could not be confirmed.”

The president perhaps had his own more pressing reasons to act, and as a result we find ourselves not only further embroiled in yet another Middle East conflict, but also another step close to direct confrontation with nuclear armed Russia.