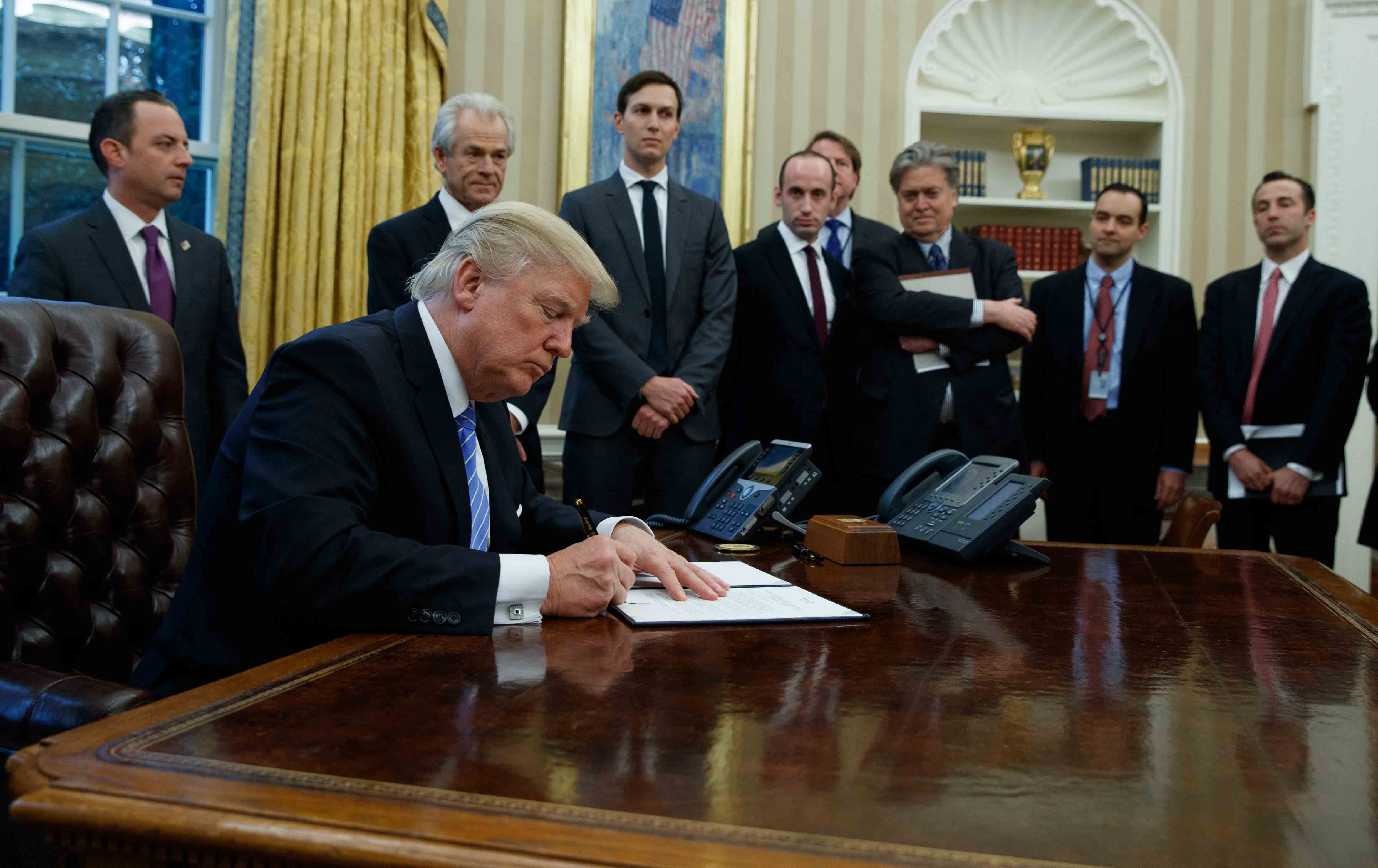 Two days after millions of women and their allies throughout the world took to the streets to protest the bigotry and misogyny of Donald Trump, the president sat in the Oval Office, surrounded by other men, and signed an executive order that could have dire consequences for women living abroad.

The order revives a Reagan-era policy barring foreign aid to any health organization that provides abortions or even discusses the procedure as an option for women with unwanted pregnancies. Known as the “Mexico City Policy,” the rule was first presented at the International Conference on Population there in 1984 and enacted by Ronald Reagan soon after. Since then, it’s been revoked or restored at the beginning of new administrations, most recently by Barack Obama, who repealed it immediately after his inauguration. The policy goes a step beyond the 1973 Helms Amendment, which prevents federal funding from being used for abortion procedures overseas: It forbids health providers who receive US funds from using other sources of money to provide abortions. It also forbids organizations receiving US aid to refer women to other abortion providers, or counsel patients about the procedure—hence the policy’s other moniker, the “Global Gag Rule.”

The United States provides more funding for women’s health services than any other country. For health providers that receive that aid, the gag rule forces them to limit their services, or face a major budget gap. In other words, health organizations that provide a whole range of essential services besides abortion get punished. For women, it means narrower access not just to abortion but also to contraception, which in many poor countries is largely funded by foreign donors. Disruptions in aid put women at greater risk for HIV and other sexually transmitted infections, and make them more likely to resort to unsafe abortions. More than 1,327 communities in Ghana, for instance, were affected after George W. Bush reinstated the rule in 2001, forcing Planned Parenthood Association of Ghana to forgo $200,000 in USAID funding and cut its nursing staff by 44 percent, according to Population Action International. In Kenya, two leading reproductive health–care providers were forced to close a total of 17 clinics. Contraceptive shipments from the US to 16 countries—primarily in Africa—stopped completely.

The most absurd thing about the Mexico City Policy is that it does nothing to decrease abortions—in fact, multiple studies have shown that abortion rates rose in the past when the Global Gag Rule was reinstated. In 2011, researchers at Stanford University evaluated abortion rates in sub-Saharan African countries before and after 2001, when Bush revived the policy. They found “robust empirical patterns suggesting that the Mexico City policy is associated with increases in abortion rates,” likely because “policies curtailing the activities of organizations that provide modern contraceptives” lead to more unintended pregnancies and “may inadvertently lead to an increase in the abortion rate.” Another study from the International Food Policy Research Institute found that in Ghana, after the loss of US aid forced family-planning clinics to close, pregnancies in rural areas increased by 12 percent. About one in five of those pregnancies ended in abortion, raising the share of pregnancies that were aborted by 50 percent. “If the intent of the proponents of the Mexico City policy is to reduce the use of abortion as a means of family planning,” author Kelly Jones concluded, “it appears that this policy misses its mark.”

Given the history of the gag rule, Trump’s rush to reinstate it is not a surprise. But that doesn’t diminish the significance of the order for millions of women and their families. The two largest recipients of family-planning funding from USAID, Marie Stopes International and the International Planned Parenthood Federation, announced Monday that they won’t comply with the reinstated policy. IPPF, which will lose $100 million as a result, promised to “work with governments and donors to bridge the funding and service gaps the Global Gag Rule creates.” But even if the money materializes from another source, it will take time, leaving women—particularly poor and rural women—at risk to disruptions in access to care. MSI (which often works in unstable and emergency settings, such as in Nepal after the deadly 2015 earthquake) will lose $30 million, or about 20 percent of its annual budget. The organization estimates the shortfall could, during Trump’s first term, lead to 6.5 million unintended pregnancies, 2.2 million abortions, 2.1 million unsafe abortions, and the deaths of 21,700 pregnant women.