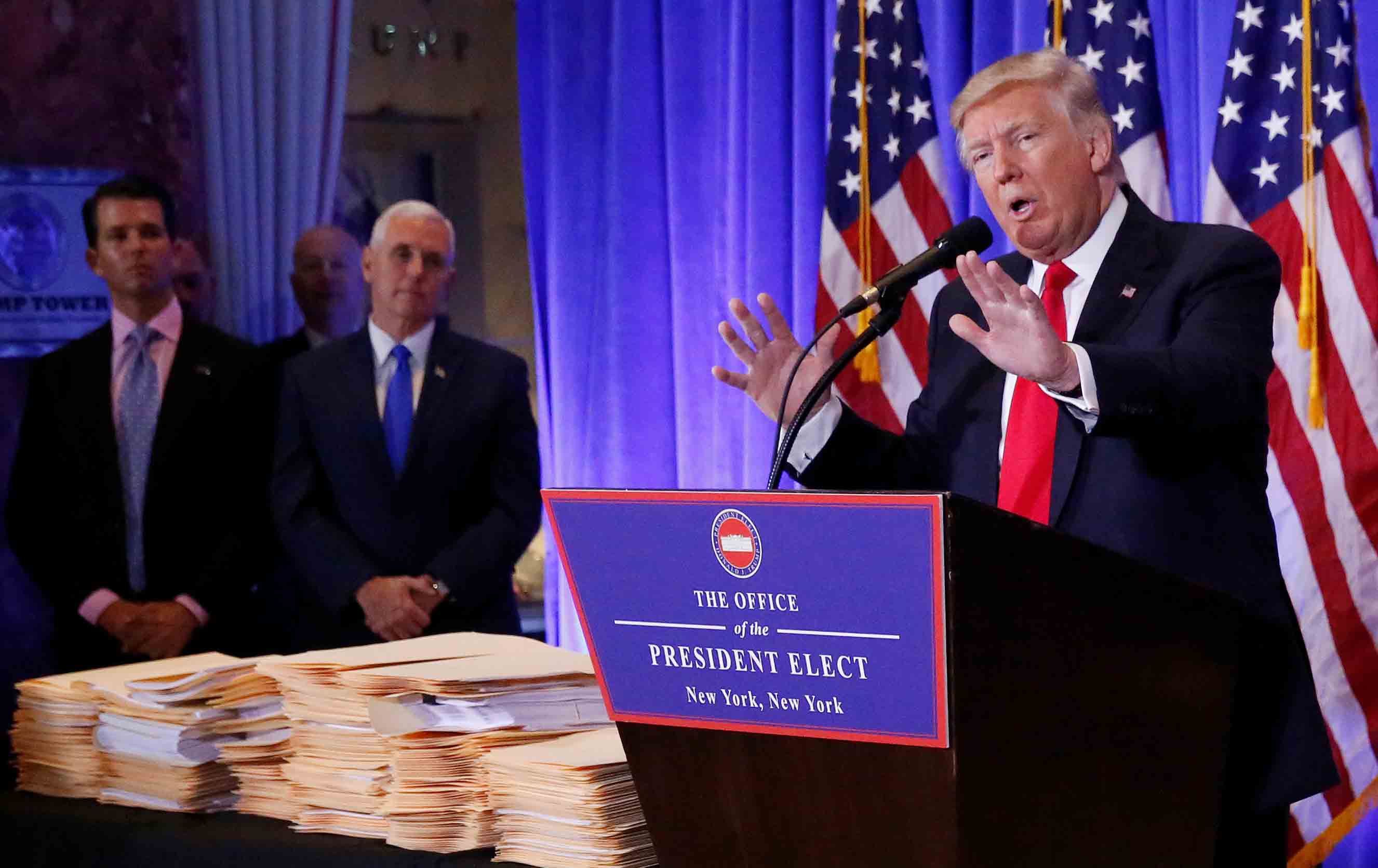 Amid the gnashing of teeth about the press corps’ performance and the general circus-like atmosphere at Donald Trump’s press conference, we shouldn’t overlook what a bind he just put his party into on the biggest legislative fight of his presidency.

Asked about Obamacare, Trump largely reiterated comments made to The New York Times, that any overhaul of the system must both repeal the bulk of the Affordable Care Act and replace it “essentially simultaneously.” In addition, Trump said that he would introduce his own plan as soon as Representative Tom Price, the nominee for secretary of Health And Human Services, is confirmed.

This delivers a Viking funeral to the absurd “repeal and delay” concept, which would have built a two-to-four-year cliff for Obamacare in an attempt to force Democrats to collaborate in its elimination. That idea had already been teetering, with multiple senators balking at voting to end the current system without a plan for the future. On Monday, five Republican Senators introduced an amendment to the budget resolution, which tees up instructions for repeal, to give committees until March 3 to return a replacement plan (under the current resolution that deadline is January 27) along with repeal, so they could occur mostly in tandem.

This looks like the new strategy. Paul Ryan pronounced himself on board with a concurrent repeal and replace as well. But delaying the ultimate vote was critical. With no consensus, time would be needed to fashion something that could be credibly called a replacement. Even conservatives in the House Freedom Caucus wanted more time for this purpose.

Trump blew the timeline. He told the Times that he wanted an “immediate” repeal-and-replace package, within weeks of his inauguration. That’s a virtual impossibility, but now congressional Republicans feel obliged to give it a shot. In the emerging game plan, Congress would complete reconciliation instructions this week; then, once the committees release a plan, they would repeal through reconciliation in late February. And finally, they would vote on a replacement before the end of March, likely through multiple legislative pieces.

That gives Republicans two months to come up with something they haven’t been able to decide on for six years. And at least some of that would go through regular order and require the cooperation of eight Democratic senators. Trump has said that he would campaign against the 10 Democratic senators up for reelection in 2018 in states he won, to force them to vote for a replacement. So Democratic pliability is a key to the strategy.

The problem for Republicans is that the accelerated schedule, along with the continual promises they make but don’t want to keep, restricts them from acquiring bipartisan support or even enough approval from their own party. For instance, Trump’s vow to introduce a replacement plan after Price’s confirmation almost certainly means that the Georgia Congressman’s own bill, the Empowering Patients First Act, would be the model. That measure replicates Obamacare in some ways, providing tax credits for individual market health insurance. The tax credits increase based on age but not income level, so a 50-year-old at the poverty line and a 50-year-old billionaire get the same $3,000 credit. Also, $3,000 cannot buy any 50-year-old health insurance, unless it’s little more than “hit by a bus” catastrophic coverage that has a high deductible and covers next to nothing. Indeed, “qualified health insurance” under the Price plan equals “any insurance that constitutes medical care,” and Price, as HHS secretary, would make that regulatory determination.

So the only way Republicans can live up to their vows on health care (like House leadership member Cathy McMorris-Rodgers’s boast that “No one who has coverage because of Obamacare today will lose that coverage”) is to allow what is fundamentally not insurance to be called insurance. In a Senate speech yesterday, Lamar Alexander, chair of the Health, Education, Labor, and Pensions Committee, which will be writing any replacement plan, explicitly called for this. “In general, the goal is to get as close as possible to allowing any state-approved plan to count as health insurance under Obamacare rules while we are transitioning to a new system,” Alexander said.

But Trump blew that too. “You have deductibles that are so high, that after people go broke paying their premiums which are going through the roof, the health care can’t even be used by them because their deductibles bills are so high,” he said at the press conference. “We’re going to have a health care that is far less expensive and far better.”

So now you have all these conditions on the replacement: It has to provide not simply “coverage” but better coverage to at least the same number of people as the current system with a cheaper bottom line cost. The Price plan, the model legislation, literally does the opposite. It envisions worse coverage and, because of the lower subsidies, a higher cost to the individual. You could certainly increase the federal outlay and up the subsidies and meet the Republicans’ self-described standard. But Price wants to cut federal spending on health care—particularly by making Medicaid, where half of the Obamacare coverage gains come from, into a block-grant program. There’s no way to satisfy the coverage promise if substantially fewer poor people can get on Medicaid. And Senator Alexander wants to repeal Obamacare’s “essential health benefits” and wellness provisions, further making coverage worse.

Moreover, Price’s plan would almost certainly mean that people will be denied coverage for a pre-existing condition, another polar opposite to Trump’s promises. Under the Price plan, only individuals with “continuous coverage” have the ability to get guaranteed issue of health insurance, regardless of medical status. Since insurance companies have no restriction on price, they can simply push people out of the market by making care unaffordable, breaking their continuous coverage and reinstating the pre-existing condition discrimination. Low-income earners correlate highly with sicker populations, so you don’t even need a sophisticated algorithm to pull this off: Just raise prices, and it’ll work itself out. That will also make the Obamacare coverage vow hard to meet.

The one way out, ironically, is for Trump to use federal power to improve health outcomes, which he alluded to today. He effectively endorsed negotiating the price of prescription drugs, a liberal priority that pharma-state Democrats blocked in Obamacare. That could be allowing for bulk-purchasing pricing through Medicare or some form of all-payer system where one schedule of drug prices gets negotiated for everyone. That would certainly look like a major advance to most Americans. But Trump would have to bulldoze a far more powerful foe than he’s yet faced in politics to make that a reality: the drug lobby. And his allies in Congress have no interest in such a fight.

Ultimately, Republicans are stuck between pushback from the right about “pretending to be cheap liberals” and pushback from the left on living up to unwise promises on coverage and cost. This is all a consequence of the expectations embedded in Obamacare for federal involvement in the health-care system. That’s become inescapable, and Trump’s boasts have exacerbated it. “We don’t want to own it politically,” Trump said about health care. Too late.