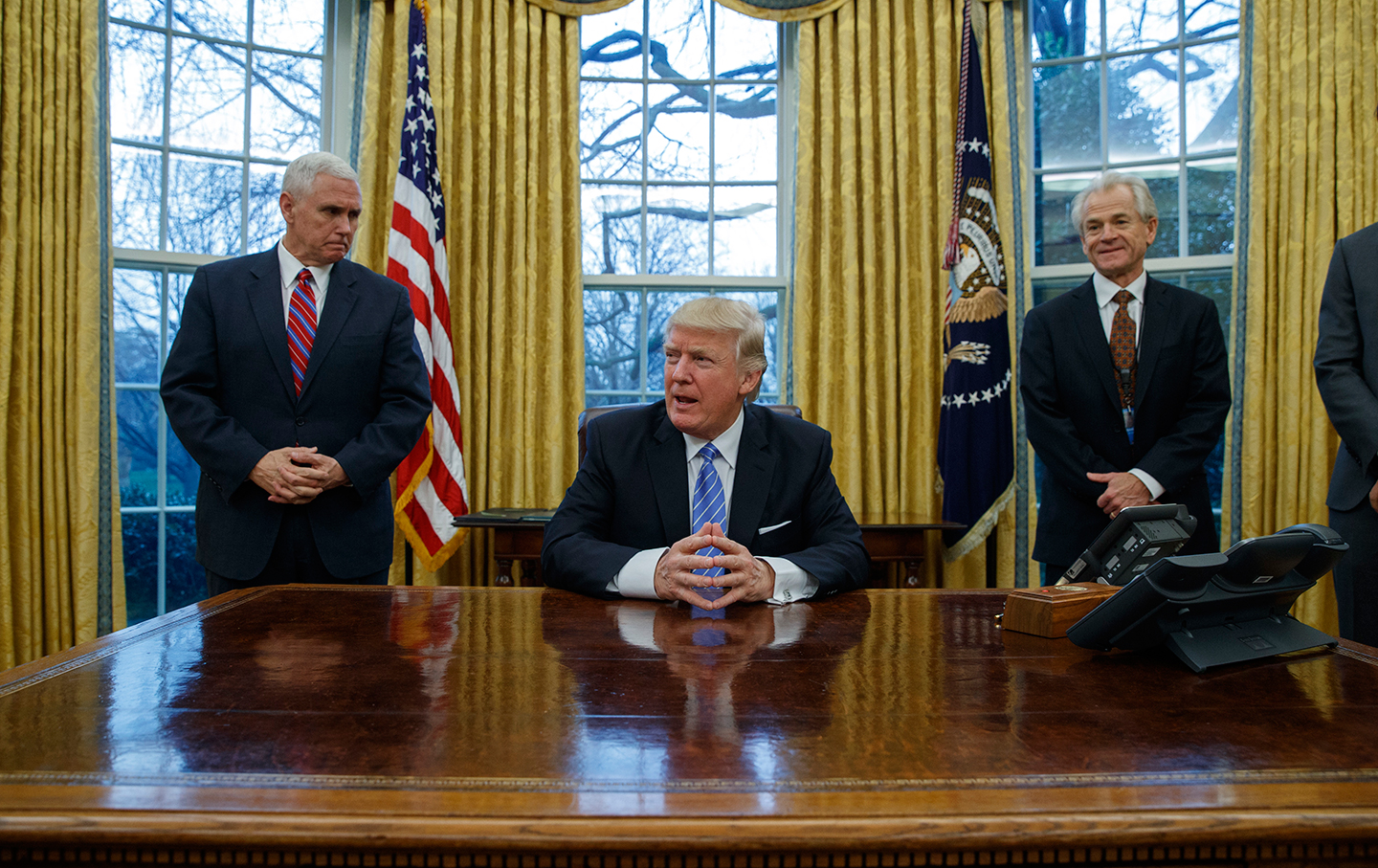 While the Republican Party flounders on other matters, Donald Trump is engineering a sloppy retreat on the singular issue that made him president—his promise to create an aggressive “America first” trade policy. A nasty intramural fight has broken out among White House insiders over whether to back away from that fiercely popular commitment.

The policy contest pits Trump’s hard-core, right-wing nationalists and some allied elements of organized labor against the globalist financiers the president recruited from Wall Street for important cabinet positions.

Trump, it appears, is on both sides of the argument. As with so many other issues, we don’t know what he actually thinks about the matter or whether he thinks about it at all.

Who owns this president—the folks who voted for him, or the power hitters of big business and banking?

His closest advisers are elbowing one another to determine who owns this president—the working-class and middle-lass folks who voted for him, or the power hitters of big business and banking. Smart money says Wall Street will prevail, but, in this era of dizzy politics, who knows?

The intensity of the backroom debate is reflected in published snippets of personal insults. Breitbart, the “alt-right” journal formerly edited by Steve Bannon, now Trump’s senior political counselor, even took a swipe at the Trump White House.

“Baffling” and “shocking,” Breitbart declared, when Gary Cohn, who is director of Trump’s National Economic Council, hired the lead trade negotiator from the Obama administration’s failed efforts for the Trans-Pacific Partnership trade agreement. That trade expert, Andrew Quinn, will become the “enemy within,” Breitbart warned.

The other side has responded with unattributed slurs of its own against economist Peter Navarro, whom Trump has made chair of the National Trade Council. He is described as a firebrand, ill prepared, isolated. Navarro is a fierce critic of free-trade orthodoxy and author of Death by China, a book that much impressed Donald Trump.

Politico, on the contrary, reported that former Goldman Sachs president Cohn “is putting in place a more conventional trade team that could act as a counterweight to…ardent economic nationalist Navarro.” The intended message: Don’t be alarmed by Trump’s crackpot talk. Goldman is on the scene. The establishment will prevail.

“At the moment, it appears that the Wall Street wing of the Trump administration is winning.” —Thea Lee, AFL-CIO

Donald Trump himself created this collision of viewpoints. Right after his election, he made a showy drama of confronting certain US corporations and warning them not to move more jobs to Mexico or China. It was crowd-pleasing theater, and some companies graciously went along with small gestures.

But Trump’s chest-pounding victory laps did nothing to alter the basic rules and incentives of the global trading system—the forces that have devastated US manufacturing jobs and wages for a generation. Neither Republicans nor most Democrats have ever acknowledged their own complicity in this destruction. Trump was the daring outsider who broke the silence.

But now what? The road to US trade reform is more difficult than Trump describes, but the case for profound change in how the United States interacts with the global economy is far stronger than status-quo free-traders will admit. After all, orthodox economists have played a central role in justifying the ruinous outcomes for average Americans.

Trump’s assembled government is like a crazy quilt of economic advisers and expert administrators who are sure to collide with one another. Maybe that’s what he had in mind. Some of them, for sure, are crackpots and greed-heads. But Trump also made some shrewd selections of provocative outsiders.

Navarro, for instance, depicts China’s rapacious accumulation of over-capacity in production in much the same critique of mercantilism that industrial labor unions have articulated for decades, usually to no avail. China produces an over-abundance of steel, glass, aluminum, and other industrial goods, then dumps them cheap on foreign markets—closing mills in America and Europe that can’t compete with the cheap commodities. Governments whine and file complaints, but don’t do much to stop it.

Likewise, Trump chose billionaire Wilbur Ross—one of the world’s richest industrialists—to be secretary of commerce because Ross knows how to assemble world class corporations from the wreckage of failed ones. Ross and Navarro collaborated on a very provocative policy paper for the Trump campaign. Their subject is how to restore general prosperity by renegotiating “bad trade deals.”

They propose this political rule as Trump’s trade doctrine: Any new trade deal must “increase the GDP growth rate, decrease the US trade deficit [now $500 billion a year], and strengthen the US manufacturing base.” Is that a sound proposition? Is it even possible in the global economy? This would be a good subject for TV debate.

“I am not anti-trade, I am pro-trade,” Ross said at his Senate confirmation hearing. “I think we should provide access to our markets to those countries who play fair, play by the rules, and give everybody a fair chance to compete. Those who do not should not get away with it, they should be punished and severely.”

Another very smart pick by Trump is Robert Lighthizer to become US Trade Representative. He has deep experience as a tough-minded trade lawyer defending American steel companies against unlawful tactics of foreign producers. Public Citizen, the longtime advocate for workers and the environment on trade issues, has endorsed Lighthizer. AFL-CIO president Richard Trumka is also cautiously optimistic about his appointment.

The America Firsters can alert the millions who voted for Trump that they’re being sold out by establishment insiders.

Trump supporters imagine Lighthizer, Ross, and Navarro as an expert trio that can challenge the failed status quo from different angles and at least have a sympathetic friend in the White House. It’s true that Wall Street power outguns the right-wing agitators in Washington political circles. But the America Firsters have a powerful counter—they can alert the millions who voted for Trump that they are being sold out by establishment insiders, the same crowd that took away their jobs.

“There’s going to be a war within the Trump administration on where they go with trade,” Trumka said, “and we’re hoping to energize the worker base he has to make sure they go in the right direction to benefit the American worker.”

But where are the Democrats? For more than a generation, starting with Bill Clinton and Robert Rubin and continuing through Barack Obama and Hillary Clinton, the party has been anchored in Wall Street money and influence. Organized labor tagged along, hoping for small favors.

The ideological upheaval in the GOP has created a parallel dilemma for the Democrats. Which side are they on?

In other words, the ideological upheaval in the Republican Party has created a parallel dilemma for the Democrats. Which side are they on? The answer is not so obvious. Trump has revealed a shift of loyalties that has been under way for years. Party professionals with their computer wizards evidently didn’t know or care.

But the stirrings of trade reform offer a great opportunity for the Democrats—an opening to restore their lost connections with working people. Indeed, Democrats can reclaim their role as the source of bold reform, the next chapter in reinventing our society and economy. The opportunity goes way beyond just nudging and challenging the Republican agenda. The vacuum in political thinking beckons left-liberal-progressives to reimagine the American future.

Right now people are wasting a lot of energy on scaring each other. What would Democrats talk about if they didn’t have Trump?