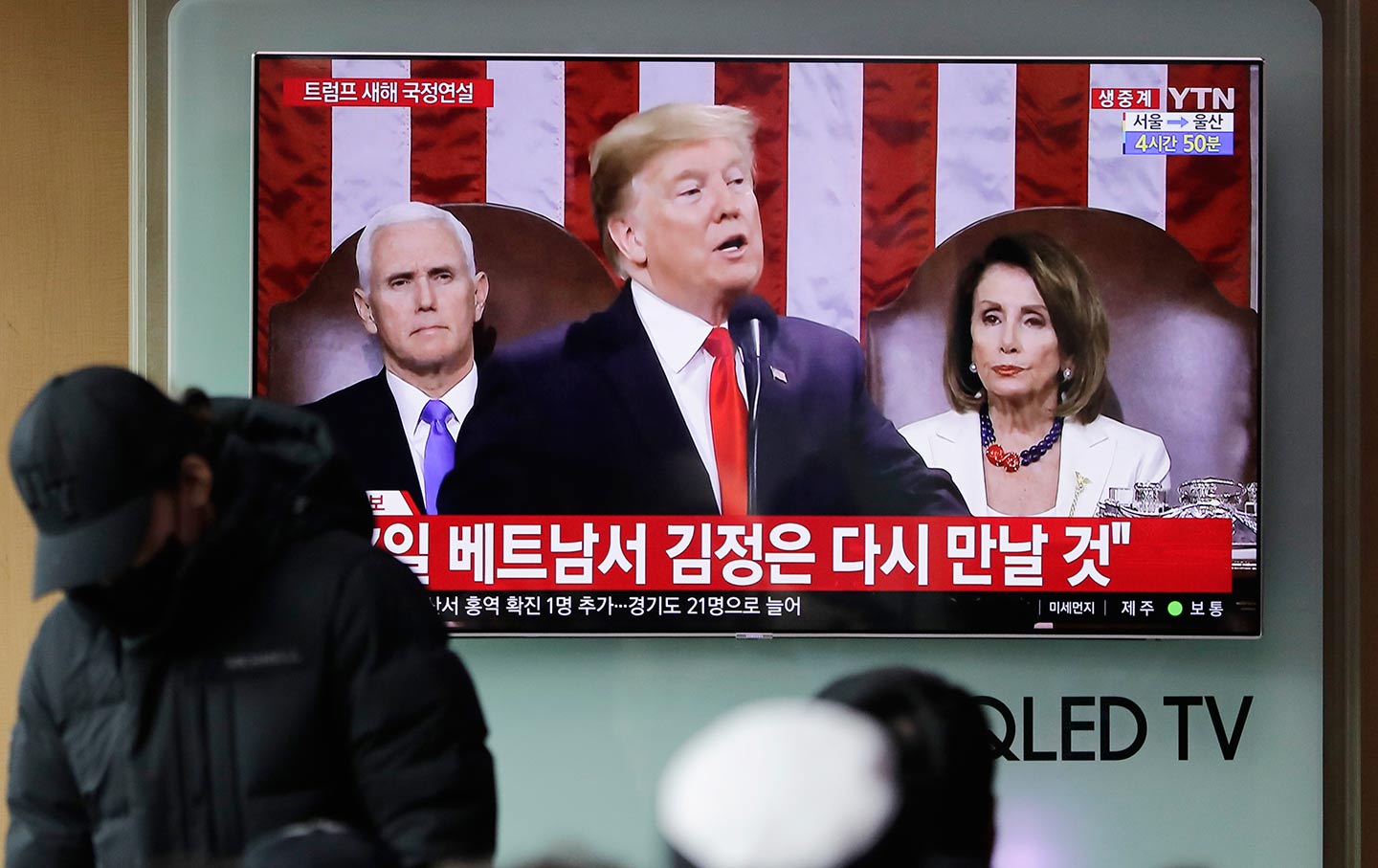 A TV screen in Seoul, South Korea, shows a live broadcast of US President Donald Trump delivering his State of the Union address on Wednesday, February 6, 2019. The letters read “Will meet Kim Jong-un in Vietnam.” (AP Photo / Lee Jin-man)

President Donald Trump delivered his second State of the Union address last night. As expected, the president demagogued the immigration issue and made yet another pitch for his beloved border wall. If the president’s rhetoric is anything to go by, we should expect the government to shut down again in 10 days’ time.

The president also made news on the foreign-policy side of the ledger. About 30 minutes before the scheduled start of the address, news leaked that Trump would resume talks with North Korea leader Kim Jong-un on February 27 and 28 in Vietnam.

In addition to the obligatory kowtowing to the Israel lobby (“my administration recognized the true capital of Israel—and proudly opened the American Embassy in Jerusalem”), Trump laid out his plans to withdraw troops from Syria and Afghanistan. Said Trump, “after two decades of war, the hour has come to at least try for peace.” 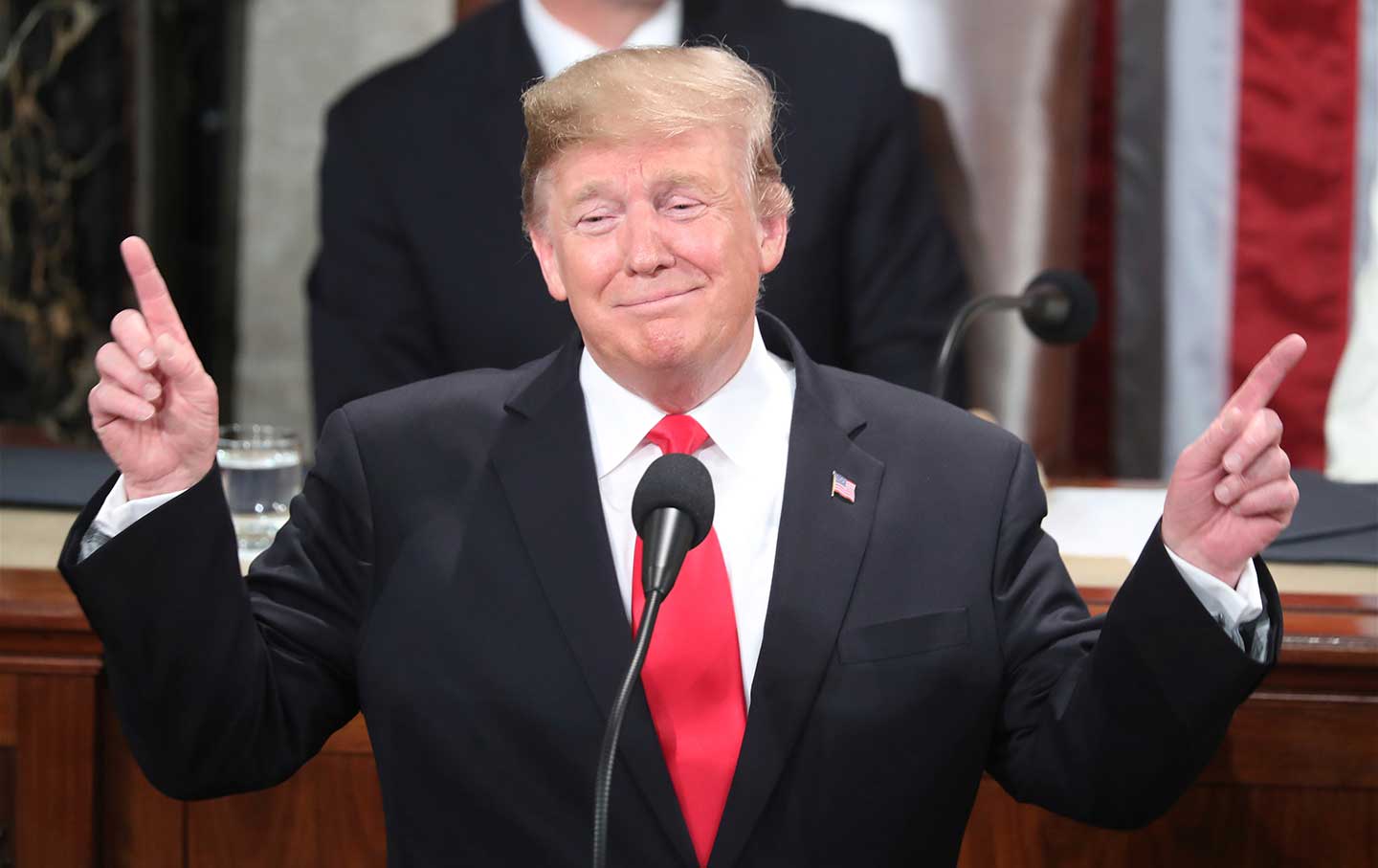 It Wasn’t a Green New Deal State of the Union Address, So What’s the Point?

What to make of all this?

First, it does not follow simply because Trump is noxious, unbalanced, and very likely criminal that diplomacy with North Korea and the removal of US troops from Syria and Afghanistan should be met with full-throated condemnation.

Trita Parsi and Stephen Wertheim recently observed that Democrats’ opposition to Trump’s Syria drawdown threatens to make them the “party of war,” and warned, “The gambit to out-hawk Trump is a dangerous one. It may have already influenced the administration to slow its departure from Syria and withhold peace-building measures from North Korea.”

“As progressives seek to develop a new foreign policy,” Parsi and Wertheim write, “they should reject the party’s drift toward belligerence and rescue diplomacy from Trump and the Democratic establishment alike.” As such, the bipartisan applause that greeted Trump’s declaration that the United States is pursuing a policy of regime change in Venezuela is rather concerning.

Still worse has been the bipartisan protest that has greeted Trump’s efforts to put an end to two Middle East wars. Only hours before Trump took to the House podium, a Middle East policy bill sponsored by Senate majority leader Mitch McConnell passed by a lopsided 77-23 vote. The bill included, among other things, an unconstitutional anti-BDS measure and a plea from the Senate not to withdraw American troops from Afghanistan and Syria.

Yet some high-profile Democratic senators are taking a more constructive approach.

Senators Jeff Merkley and Bernie Sanders recently introduced legislation that seeks to mitigate the damage done by Trump’s unilateral withdrawal from the landmark 1987 INF nuclear-arms treaty. The Prevention of Arms Race Act of 2019 would prohibit funding for any weaponry that would violate the INF Treaty. Several of the act’s co-sponsors, including Kamala Harris, Kirsten Gillibrand, and Elizabeth Warren, are currently seeking to replace Trump in 24 months’ time.