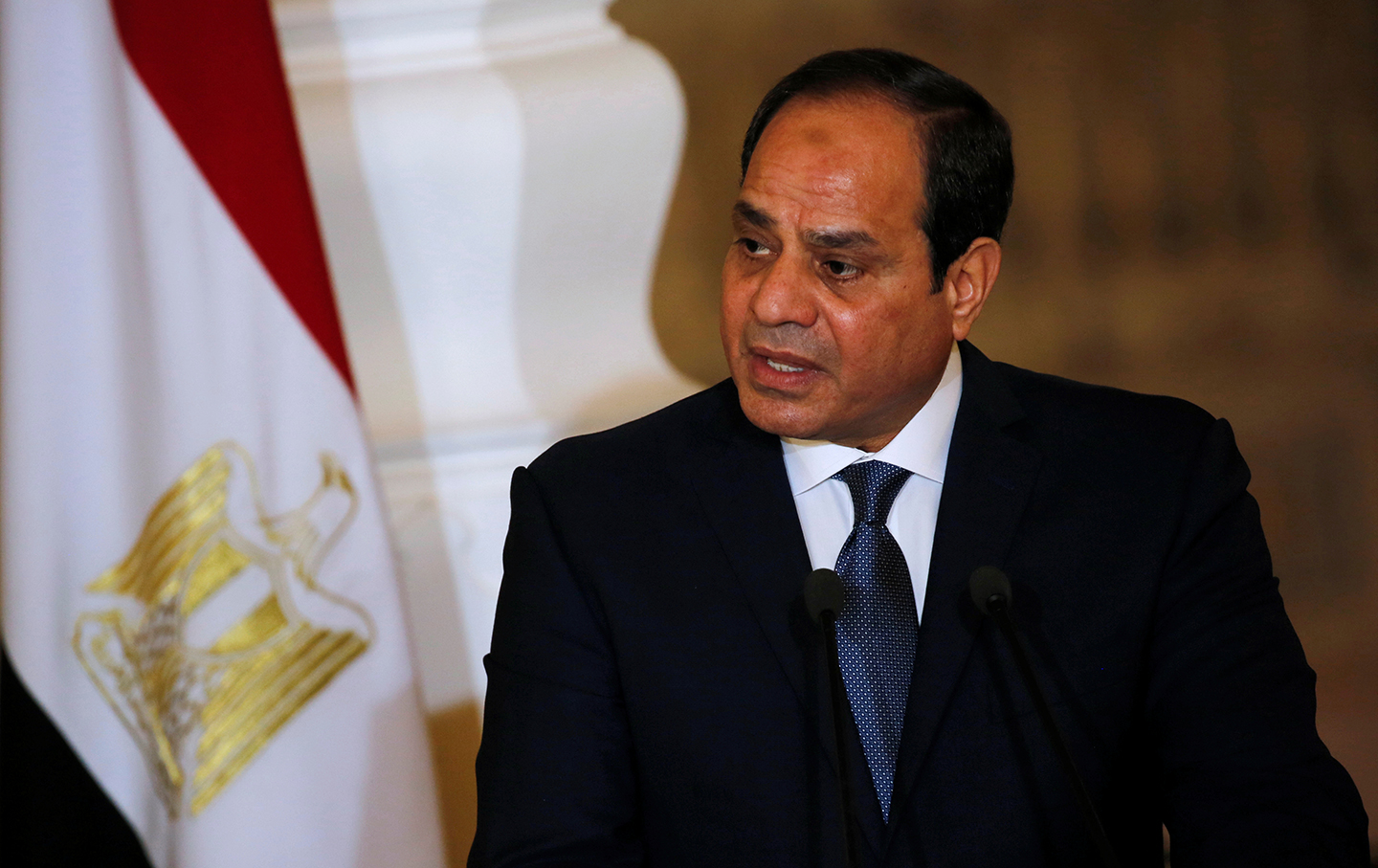 Eleven days before Egyptian President Abdel Fattah el-Sisi was due to travel to Washington for his first White House visit, Aya Hegazy was escorted from her cell in the Qanater women’s prison, where she has been locked up for nearly three years, to the Abdeen courthouse in downtown Cairo to be sentenced.1

It was the culmination of a nightmarish ordeal for the 30-year-old Egyptian American. 2

Hegazy grew up in Falls Church, Virginia, but after graduating from George Mason University with a degree in conflict analysis and resolution, she returned to Egypt following the 2011 revolution. She got married and, with her husband, used the wedding money to establish the Belady Foundation, an organization that provided services for street children in Cairo. In May 2014, during a broad crackdown on civil society, police raided the foundation and arrested the couple, along with several others, on a raft of trumped-up charges, including human trafficking, sexual exploitation of children, and using children in antigovernment protests.3

Their trial, which has been marked by due-process violations and frequent, prolonged postponements, has been decried by Human Rights Watch as a “travesty of justice.” Finally, after spending 1,058 days behind bars, Hegazy was to hear the verdict.4

At her trial in Cairo, Aya Hegazy ignored the commotion around her and read “I Know Why the Caged Bird Sings.”

Hegazy was escorted into the courtroom by black-clad policemen in berets, who led her to the defendants’ cage and locked her in. Dressed entirely in white with a scarf draped loosely over her hair, she stood out amid the unwashed walls, the gray floor, and the bustle of men around her; a pristine figure in striking contrast with all the cement and iron and dust. Ignoring the commotion of the court, she sat down and quietly began to read from the book she was carrying: Maya Angelou’s evocative memoir, I Know Why the Caged Bird Sings.5

Her husband, Mohamed Hassanein, and the other defendants in the case were eventually brought in and joined her. The married couple only see each other at trial sessions, weeks or months apart. When Hassanein entered the cage, they embraced tightly and sat close to one another, smiling and speaking in hushed tones.6

After several hours, the judge announced that the verdict would be postponed to April 16. There was no explanation. Hegazy, Hassanein, and the others were hauled back to prison.7

Outside the courthouse, Hegazy’s mother, Naglaa Hosni, looked downcast. “What if they postponed it to wait until after Sisi’s trip to Washington?” she asked searchingly. “That could mean it’s a harsh sentence and they don’t want him to come under criticism while he’s there.”8

Speculations like these are common in Egypt. The political machinations of the regime are obscure and seemingly arbitrary, leaving people confused and desperate in their attempts to make sense of government decisions.9

And Hegazy’s case is just one of thousands.10

Since coming to power in 2013, Sisi has presided over the worst wave of repression in Egypt’s modern history. Tens of thousands of opposition supporters have been imprisoned. Torture, extrajudicial killings, and forced disappearances are rampant. New draconian laws limiting freedom of assembly, expression, and the press are ruthlessly enforced. Journalists have been prosecuted and sentenced. The airwaves have been purged of all dissident voices. An unprecedented crackdown on civil society is under way. And the economy is on the brink of collapse, with skyrocketing inflation, massive debt, and austerity measures that recently helped secure a stringent new IMF loan.11

Egypt has been a close ally of the United States for nearly four decades and is the second-largest recipient of US military aid, after Israel. Despite Sisi’s crackdown, the Obama administration did little to alter that relationship.12

In 2013, Obama partially suspended military aid following the ouster of elected president Mohamed Morsi and the massacre by security forces of nearly 1,000 of his supporters, only to reverse the decision two years later (though he did cancel a program that gave Egypt the right to buy equipment on credit, known as cash-flow financing). The restoration of aid came despite official acknowledgment of Sisi’s human-rights abuses. A congressionally mandated State Department report on Egypt found that security forces engaged in “excessive use of force,” including “unlawful killings and torture” as well as “disappearances; harsh prison conditions; arbitrary arrests…deficiencies in due process, and the suppression of civil liberties.”13

Last May, the Government Accountability Office released a 77-page report that found the US government was not sufficiently vetting the sale of weapons to Egypt—effectively whitewashing the regime’s abuses—and risked violating the Leahy Law, which requires the State Department to suspend military aid to any country that it determines “has committed a gross violation of human rights.”14

“This is a fascist regime that is getting away with incredible crimes.” —Aida Seif al-Dawla, human-rights defender

“This is a fascist regime that is getting away with incredible crimes and human-rights violations in exchange for a price,” said Aida Seif al-Dawla, the founder of the Nadeem Center for Rehabilitation of Victims of Violence. The group recently documented 177 killings, 37 cases of torture, 13 deaths in detention, 66 cases of medical negligence in prison, and 94 cases of enforced disappearance, among other abuses, in the month of March alone. Seif al-Dawla, a veteran human-rights defender in Egypt, has been banned from travel, and security forces closed down her organization last month. “This price is Sisi’s promise to control the migration problem into Europe, the closeness with Israel, the business deals he is doing with the West, his acceptance of the loan conditions from the IMF. In exchange for all this, it seems the world is ready to look away from the atrocities that he is committing.”15

Aya Hegazy’s case garnered attention in Washington last year after her family made the decision to begin lobbying lawmakers and the State Department. Democratic Representatives Gerry Connolly and Don Beyer of Virginia publicly called for her release in September, as did the Obama White House, prompting Egypt’s Foreign Ministry to accuse the United States of disrespecting the rule of law; the ministry claimed Hegazy had been treated exceptionally well because she is an American citizen.16 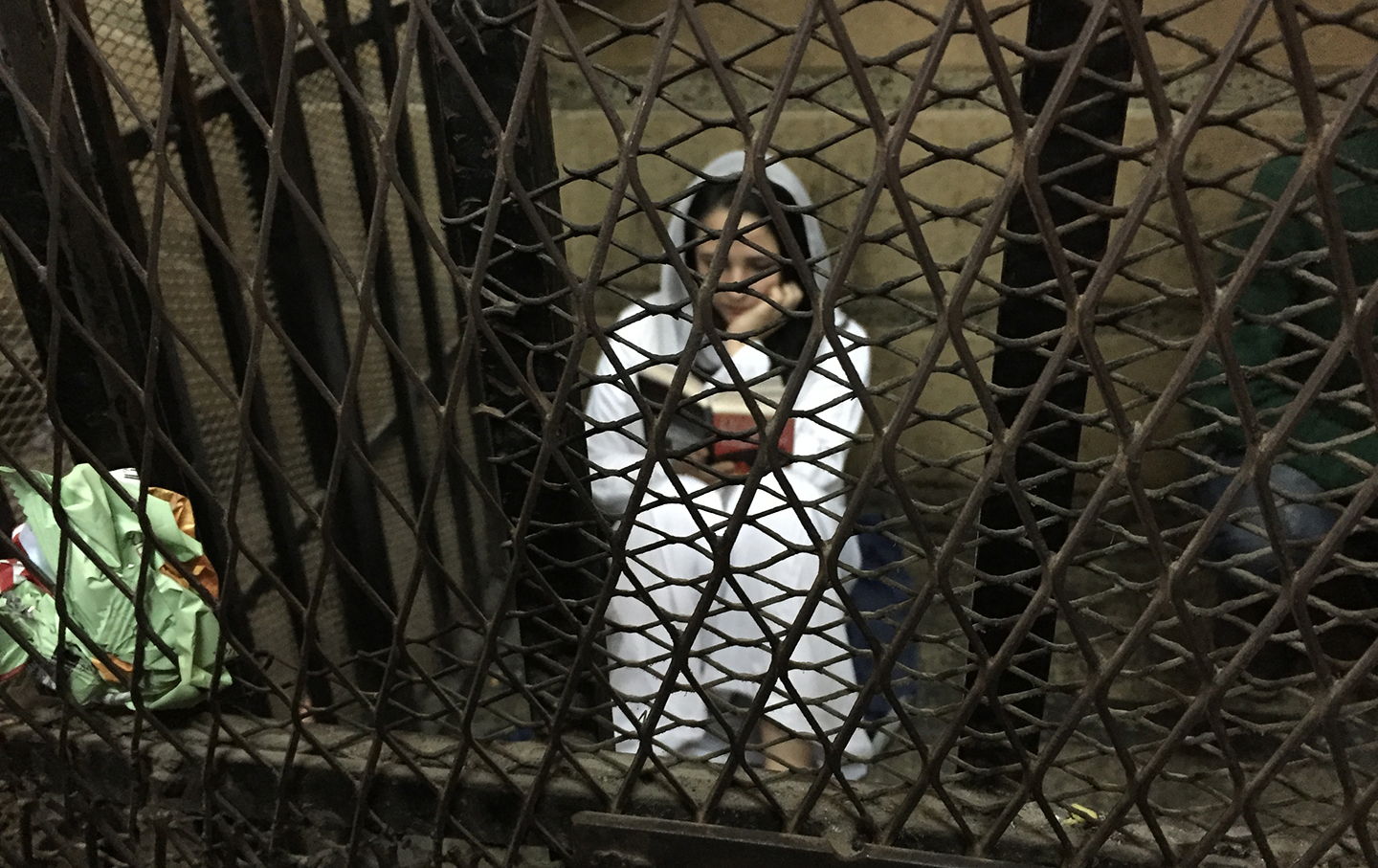 Although the Obama administration offered little more than nominal support for the Hegazy family, it seems unlikely President Trump will be inclined to do even that much. Trump and Sisi have expressed mutual admiration for each other over the past several months, adopting a rhetoric rich in flattery and devoid of even the slightest criticism: nothing on Trump’s targeting of Muslims, and nothing on Sisi’s rampant human-rights abuses. As such, US-Egypt relations appear set to be even warmer than before.17

After their meeting last September, Trump called Sisi a “fantastic guy” and touted the “chemistry” between them.

After their first meeting in September 2016, Trump called Sisi a “fantastic guy” and touted the “chemistry” between them. A couple of months later, Sisi was the first world leader to congratulate Trump on his election win. The close relationship has been loudly celebrated in Egypt’s pro-state media. Both men also share dark views on the Muslim Brotherhood, the group Sisi forced out of power and brutally suppressed. “[Trump] wants to use President Sisi’s visit to reboot the bilateral relationship and build on the strong connection the two presidents established when they first met in New York last September,” a senior administration official told reporters on Friday.18

The Egyptian president, who has met Obama only once, on the sidelines of the UN General Assembly in 2014, will be the first Arab leader to be received by Trump at the White House. And the Trump administration has made it clear that it will not let Egypt’s human-rights record become a point of public contention. “Our approach is to handle these types of sensitive issues in a private, more discreet way. And we believe it’s the most effective way to advance those issues to a favorable outcome,” the senior administration official said.19

Trump and Sisi have repeatedly praised each other for their efforts to combat terrorism, which is slated to be one of the main topics of discussion on Monday. Last month, CENTCOM head Joseph Votel said the United States wanted to resume a major biennial military exercise with Egypt that Obama had canceled in 2013.20

Sisi has positioned himself as a bulwark against religious extremism and a strong leader who can maintain stability in Egypt, even as neighboring countries like Libya, Yemen, and Syria have collapsed under civil wars fueled by foreign intervention.21

Sisi adopted the war on terror as his raison d’être when he overthrew Morsi in 2013. Yet in the years since, Egypt has only seen more war and more terror. A growing insurgency in northern Sinai has continued unabated, with near daily combat between militants and security forces. Dozens of Christian families have been forced to flee their homes in El Arish, driven out by a targeted campaign of Islamist violence. In December, a bomb ripped through Cairo’s main Coptic cathedral, killing at least 25 people. In addition to attacks on the police and army, militants have also targeted tourist sites and claimed responsibility for the downing of a Russian airliner in 2015 that killed all 224 people on board.22

The increased militancy has been used to justify harsh government repression in the age-old cycle of authoritarian logic. Sitting in the Oval Office, Trump and Sisi will no doubt see eye to eye and will make even more plain where the priorities of their nations lie.23

Aya Hegazy, a citizen of both the countries they rule over, will not be a part of the conversation. Like tens of thousands of others in Egypt, she is locked in a prison cell, awaiting judgment. Yet another caged bird.24