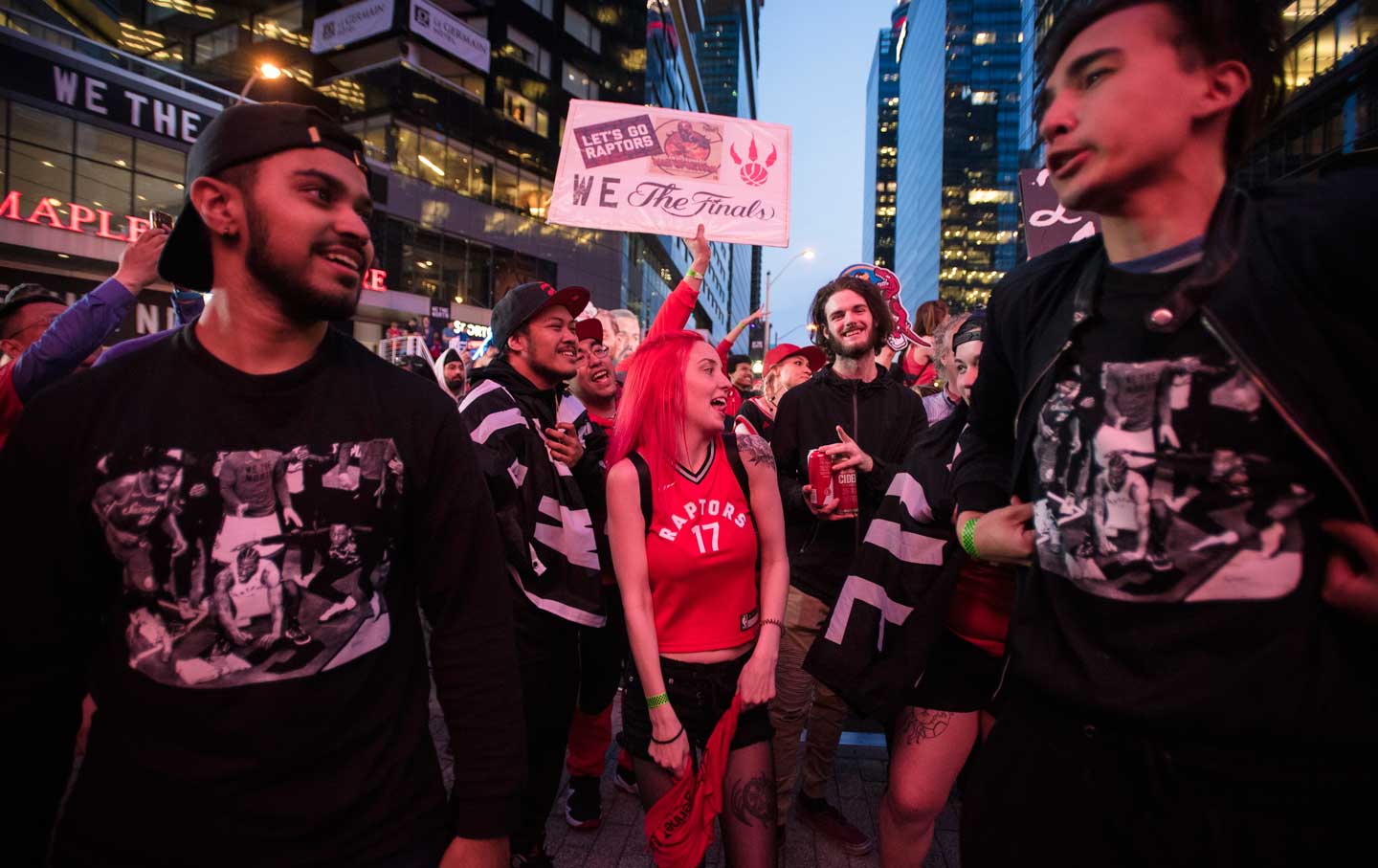 Toronto Raptors fans react from outside the Scotiabank Arena during Game 1 of basketball's NBA Finals between the Golden State Warriors and the Raptors in Toronto on Thursday, May 30, 2019. (Tijana Martin / The Canadian Press via AP)

Toronto is a city worth treasuring, especially in 2019. I’m not just writing that because their star-crossed hoops team, the Toronto Raptors, are finally in the NBA Finals, although their appearance has supplied the occasion to write this particular mash note. I love Toronto because one only has to be there for a short time to realize that it is a city unlike no other. It has a buzz like the New York of my youth, a New York that is now as gone as Pompeii. It’s like New York spiked with Minnesota Nice. It’s like New York with health care. I love Toronto because on my first night there, people tried to get me to play a pick-up hockey game, referred to as a “shinny.” (All involved were very polite in explaining what that was.)

As the pro wrestler Kevin Owens said, “There are some cities that you go to that bring something out of you. Toronto is one of them.”

This is also a city it must be noted that thrums with everything that Donald Trump and his ilk would despise. It is a city of immigrants (46 percent of the population, according to the most recent census); a city of multiple languages, and a city that, like few others, has the feel of cultures piling on top of one another in a way that’s sprawling and unkempt, and yet where the differences work in concert with one another.

This team is an apt reflection of the city, not merely because the Raptors count key players from Spain (Marc Gasol), Cameroon (Pascal Siakam), and England (OG Anunoby). But also because this is the first team—remarkably—that has made the NBA finals without having one person on the roster selected in the top 10 of the NBA draft. Its highest-drafted player is all-world forward Kawhi Leonard, selected at number 15 by the Indiana Pacers (and then immediately traded to the San Antonio Spurs).

That factoid is fitting for this particular team, because these NBA Finals offer a classical David-and-Goliath narrative, with these underdog Raptors loading up their slingshot against the dynastic Golden State Warriors, a team packed with All-Stars and aiming for its fourth championship in five years. There are two ways to get players who were picked highly in the draft: You are either a terrible franchise and draft high, or you sign these one-time prospects in free agency, after they prove their worth. The Raptors in recent years have been a solid club without a high-draft pick. As for free agency, this is a team that has historically had a great deal of trouble finding free agents to come to “The Six.” Many are told by their agents and business managers that Toronto is not the place to go: that taxes, weather, and living in a different country make the team radioactive. But when general manager Masai Ujiri (born in England, family from Nigeria) had the chance to trade the most popular player in team history, DeMar DeRozan, for superstar Kawhi Leonard, even though Leonard had only one year left on his contract and could potentially leave after free agency, he took the damn risk. Now that risk can possibly result in a championship for Toronto and an opportunity to turn a hockey city and a hockey country into a place where basketball has a home.

Kawhi Leonard has been positively Jordanesque in these playoffs and has captured the imaginations of the most hardened hockey fans. For those who still think that this will never be a hoops town, it is where Serge Ibaka (home country, the Congo Republic), a reserve of the team, walked into a restaurant—in a viral clip—and the entire restaurant burst into a standing ovation.

There is so much reason to root for Toronto. But save some political love for the dynasty that is Golden State, especially for reserve player Andre Iguodola. In an interview with Bleacher Report, Iguodola said:

Historically, capitalist America says you have to be cutthroat to make capital gains. In order to eat, you have to kill. In order to make money, someone has to lose money. Even on the court, there’s the mamba mentality…. I think sports and business take you further away from the human being aspect of life. That’s what I feel more than anything. Man, I’m not a human being anymore. That’s where my struggle is.

While Iguodola is worth cheering, Toronto is the where your heart should lie if you are otherwise without a rooting interest. I am thinking that we are looking at an upset. The Raptors have home-court advantage, and I think that it is one hell of an advantage. The fans are hungry and the players match their intensity. Take the Raptors in seven.