At first glance, this must appear to be the politest anti-Olympics movement imaginable. The group fighting against the games is known as Okotowari Olympics 2020, or No Thanks Olympics 2020. However, after spending a day among them, it is clear that the honchos in the Japanese Olympic Committee should be worried. These organizers are feisty, whip-smart, and their goal is nothing short of preventing next year’s Olympics from landing in Tokyo. Their concerns are based on the recent history of what happens to a city after the Olympics descend: debt, displacement, and hyper-militarization. For them, it is also a question of priorities.

In the words of one organizer, Tomiko, “People are still suffering from [the earthquake and Fukushima nuclear meltdown of] 2011. The government needs to spend money to help those still suffering, not on the Olympics.”

This group of activists and agitators spent the day taking a disparate group of three dozen people—many from past or future Olympic cities—on a tour of Olympic building projects already underway. By the time they were finished, it was very clear why they were protesting.

Akio Yoshida, who, like several of the Okotowari organizers, cut her teeth doing work in solidarity with Tokyo’s large homeless population, said, “The displacement already happening will just move more people from their homes. All Olympics discriminate. Some people are prioritized. Others are disregarded.” After touring future Olympic sites, we could all see who the winners will be: well-connected developers, construction magnates, and security barons. Meanwhile, the working poor and houseless will be left out.

We saw a body of water slated for open-water swimming, with bacteria levels dangerous to the human touch. We saw a baseball stadium, the home of the famed Yakult Swallows, that will be demolished, only to be rebuilt a block away to meet the specifications of the Olympics. We saw public spaces such as a youth aquatic center that will be shut down to make way for Olympic sports, while young people will have to spend next summer with their noses pressed against the glass. We saw a beautifully designed, massive public stadium that was built only for volleyball and will be handed over after the Olympics to a private business concern. The stadium cost $300,000,000.

Around Tokyo, we saw public spaces clogged with construction that fenced out everyday people. One public area that was typically buzzing with baseball was off-limits, while bulldozers constructed an Olympic track venue. It’s deeply ironic that a traditional location for amateur athletes to train will be demolished for Olympic facilities. As one organizer said, “What is the point of the Olympics if they will actually serve to stifle amateur sports?”

Atsumi Masazumi, who lives in the neighborhood around the new National Stadium, told us, “The area I was proud of is being changed for the worse by the Olympics. It’s sneaky to use the Games to change the building codes. It’s horrible.” He stressed that he loves sports but doesn’t love what the Olympics are doing to his city.

We also traveled to the Odaiba Marine Park, the future location of Olympic swimming and the triathlon. But the beach was fenced off from the public. Signs pegged to posts around the perimeter of the area informed passersby that the beach would be closed from July 1 through September 6 in order to hold an Olympics-related event. Again, spaces meant for the public were being cordoned off because of the Olympics. 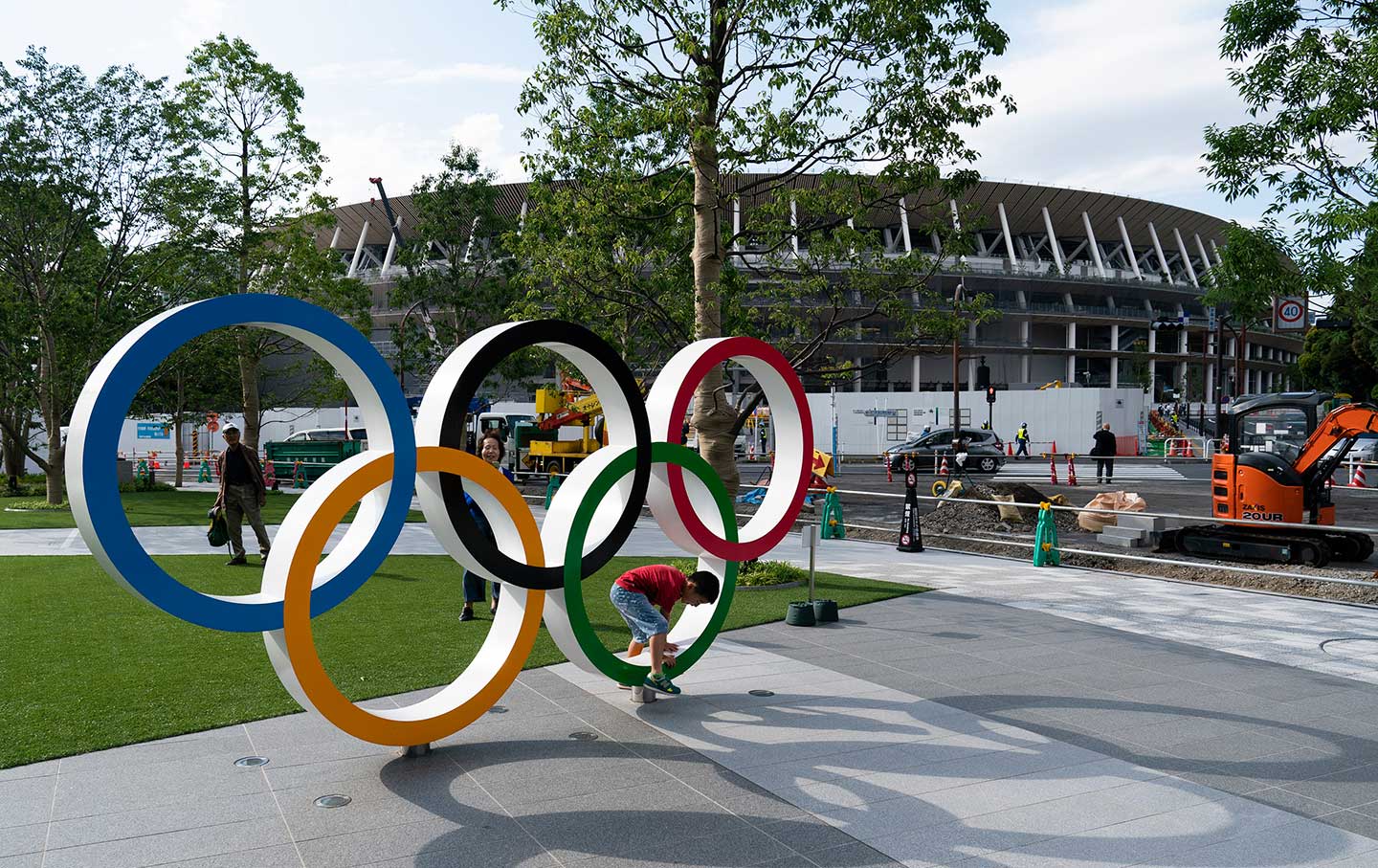 Is Tokyo Ready for the Olympic Juggernaut?

We saw all this while walking in a typical Tokyo summer’s stifling humidity, a reminder of the kind of temperatures that outdoor athletes will have to face next year.

We didn’t just walk and tour. In a quick-fire action at Japan Sport Olympic Square, the activists unfurled two banners reading “Olympics Kill the Poor” and “Reverse the 2020 Tokyo Olympics” and posed for a photo in front of the Olympic rings. Jittery security guards on the scene treated the two banners as if they were Molotov cocktails in the making, desperately shepherding activists away from the vicinity.

Satoko Itani, a professor of sport and gender studies at Kansai University, told us that the Olympics-induced state of exception we saw in motion all around us was “not only about the Olympics, but what happens afterwards.” It is the concern of “what happens afterwards” that activists will spend the next year fighting. This week is meant to kick off those actions, with symposiums, demonstrations, and rallies. If today is any indication, they will be organized in a way that everyone involved is crystal clear that the stakes for Tokyo could not be higher.