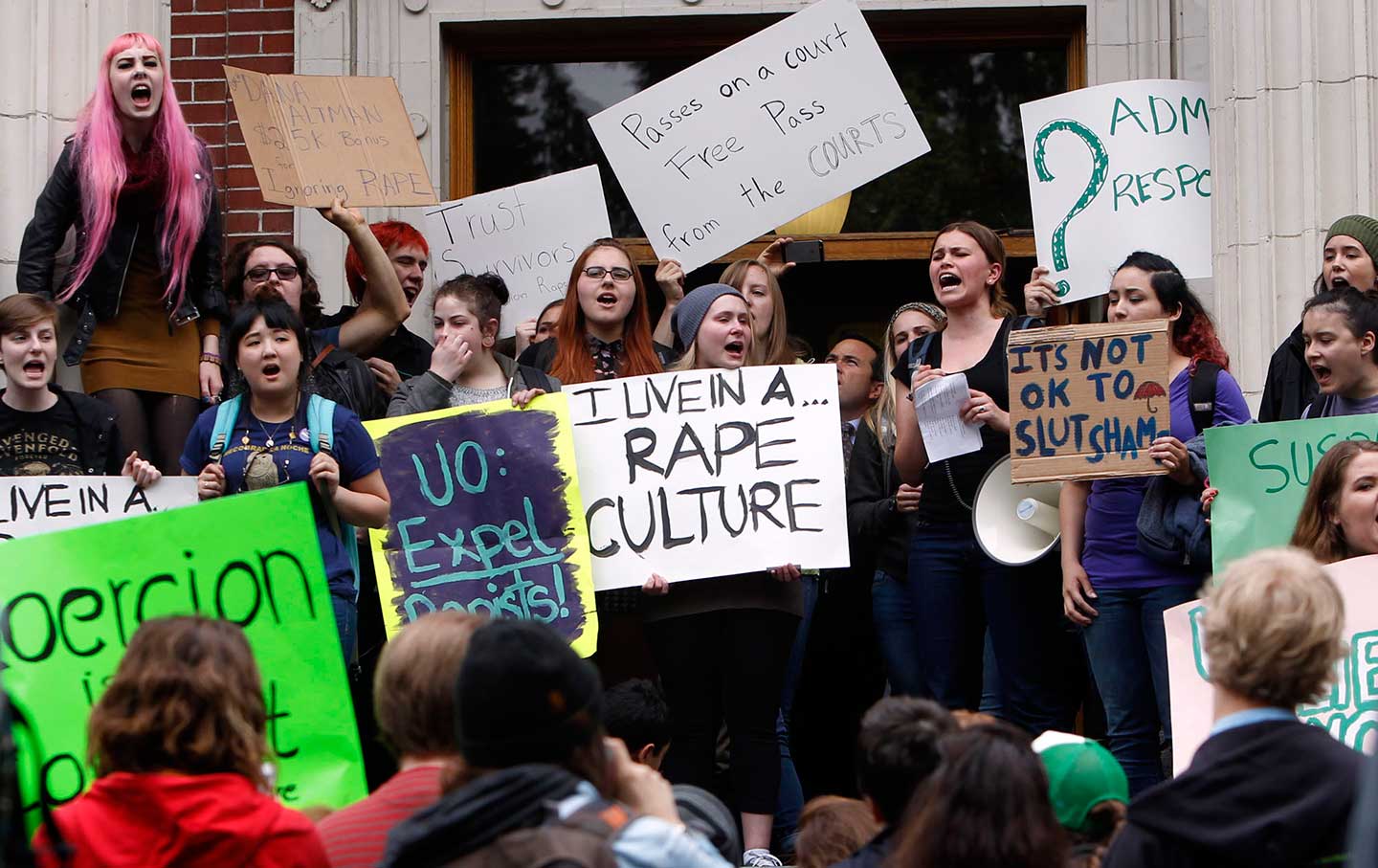 A 2014 protest at the University of Oregon against sexual violence on campus. (Chris Pietsch / The Register-Guard via AP Images)

Last month, to the horror of sexual-violence activists around the country, Betsy DeVos announced her plans to revise Title IX regulations. When the revisions go into effect, the new code will dramatically narrow the definition of sexual harassment at college. Accusers will undergo a process more similar to one they might experience in a court of law—that means cross-examination and a higher burden of proof—along with all the injustices and humiliations those procedures carry. Though there’s a two-month period during which the public can weigh in, these rules have been a year in the making; even a widespread public outcry is unlikely to have any effect.

But as student activists prepare to defend the survivors of assault and students of color on their campuses, it’s worth asking: Are Title IX and affirmative action, as they stand today, worth defending? What can we replace them with that more effectively combats the racism and sexism that Americans, of all ages and educational attainment, experience?

Finally: Why do we care so much about the policies of a few elite colleges, when rape and racism are national concerns outside the ivory tower, too?

A horrifying 11 percent of college students (and 23 percent of undergraduate women) are sexually assaulted. But outside the academy, the prognosis is even worse: College-aged women who aren’t enrolled in a degree program are 20 percent more likely to be raped than women on campuses, and even more likely to be violently assaulted; the lower-paying jobs they can expect, on average, without a college degree put them at increased risk of sexual violence for the rest of their lives as well. While rape culture outside the classroom will inevitably make its way in, college does in fact provide some insulation.

While affirmative action helps some students of color gain access to those protections, it applies to far fewer people than we might expect. Almost 80 percent of American freshmen attend an institution that accepts over half of its applicants, meaning selective admissions practices—including affirmative action—don’t apply to them. Meanwhile, rape culture and structural racism hurt all Americans.

We care about Title IX and affirmative action because of what they’re supposed to do: namely, stop rape and allow people born without privilege into institutions that serve as the gatekeepers of success. That can be done without Title IX. This moment should prompt reflection about better systems for equality, on campus and across the nation, because the ones we have—the ones embodied by Title IX and affirmative action—are regressive and flawed.

Legal scholars and anti-rape activists have written extensively about the shortcomings of Title IX. Technically, it’s not an anti-rape law but an anti-discrimination code—which means that when a student files a Title IX complaint, it’s an accusation of gender discrimination levied against the school rather than a claim of individual violence. This is a bizarrely roundabout way to combat rape, and it’s not very potent: The vast majority of campus rape still goes unreported, Title IX bureaucracy is often difficult for victims to navigate, and the result is a protocol that protects schools against liability more than students against rape.

Even when administrators follow protocol, there are few consequences. Furthermore, the people accused of rape have few avenues of defense and no presumption of innocence, unlike in a criminal court. Black men especially (and minority men generally) are disproportionately accused of sexual assault under Title IX, leading Harvard Law faculty to write an open letter against strengthening the code. That’s why we should dismantle “the historical bias against victims, particularly black victims,” as one law professor wrote in The New Yorker, but also “heed our legacy of bias against black men in rape accusations”—and the terrifying stakes of that bias. (It’s also worth noting the precarity with which LGBT students are protected under Title IX; it took one “Dear Colleague” letter to establish those protections, and it would only take another one to undo them entirely.)

Though affirmative action as it stands is clearly an improvement over the status quo, it too is depressingly limited in its scope. At its most expansive, it could account for gender, race, class, and historical discrimination; instead, the Supreme Court has ruled that it can only be used to increase diversity of a student body. As a result, as Henry Louis Gates has noted, the children of African immigrants—among the most highly-educated and upwardly-mobile groups—are disproportionately represented in elite schools as compared to the descendants of enslaved Americans. (It even fails by diversity measures; because the Common Application uses census categories, Arab and North African students are often forced to classify themselves as white, and admissions officers have to use proxy variables—whether Arabic is spoken at home, personal statements that speak about religion—to ensure representation of those students.)

Affirmative action is also about equality of opportunity, meaning admission to college, not ensuring that women and students of color have a shot at succeeding once they’re there. Black women are the group most likely to enter college, but they are also among the groups least likely to graduate. Student and faculty activists trying to expand sexual-assault protections and affirmative action should take advantage of this opportunity to connect campus struggles to national concerns.

Instead of relying on a bureaucracy almost guaranteed to leave all parties miserable, students could push for—or even independently implement—restorative justice or another alternative approach when dealing with sexual assault (like Skidmore College has done). In the rare case that someone is found guilty of assault under Title IX, the most extreme consequence possible is expulsion. It’s irresponsible, at best, to send a student who has committed violence out into the wider world; a restorative-justice approach would insist on a perpetrator taking responsibility and beginning to make amends with their accuser and their community.

Students have successfully pushed for changes in admissions policies before, resulting in open admissions at CUNY in 1970 and the admission of trans women at all-female colleges more recently. If the best colleges must remain selective—a question that itself should remain open—greater student and faculty involvement in admissions would be a good gateway to a better student body.

Affirmative action and Title IX aren’t the only policies that affect students and the world around them. Allowing fraternities to exist is a tacit acceptance of rape culture on campus—and afterward, when those ex–frat boys take public office in astonishing numbers. State budget cuts, tuition increases, and predatory student loans affect the makeup of the student body at least as much as affirmative action does. And even before they turn 18, low-income students—especially black, Latinx, and Native ones—face uncountable obstacles: underfunded grade schools, lack of access to stable housing, food, or medicine, needing to work or take care of siblings after school, and so on.

Expanding advantages for certain groups cannot come at the expense of other marginalized people, though. So-called “carceral feminism” prioritizes individual punishment and revenge over building and maintaining communities, and it often exposes low-income, black, and Latinx people to the violence of the state. Efforts to ensure black representation in higher education should not mean quotas on Asian enrollment; it should mean an end to legacy admissions. And discussion of the very fair expectations college students have—of a racially and economically just class, of a rape-free campus—cannot come at the expense of discussing a rape-free country, or a racially and economically just nation.

The needs of students and the needs of other young Americans are not mutually exclusive. On campuses and off, let’s take this moment to fight for what we want, not just defend what we have.