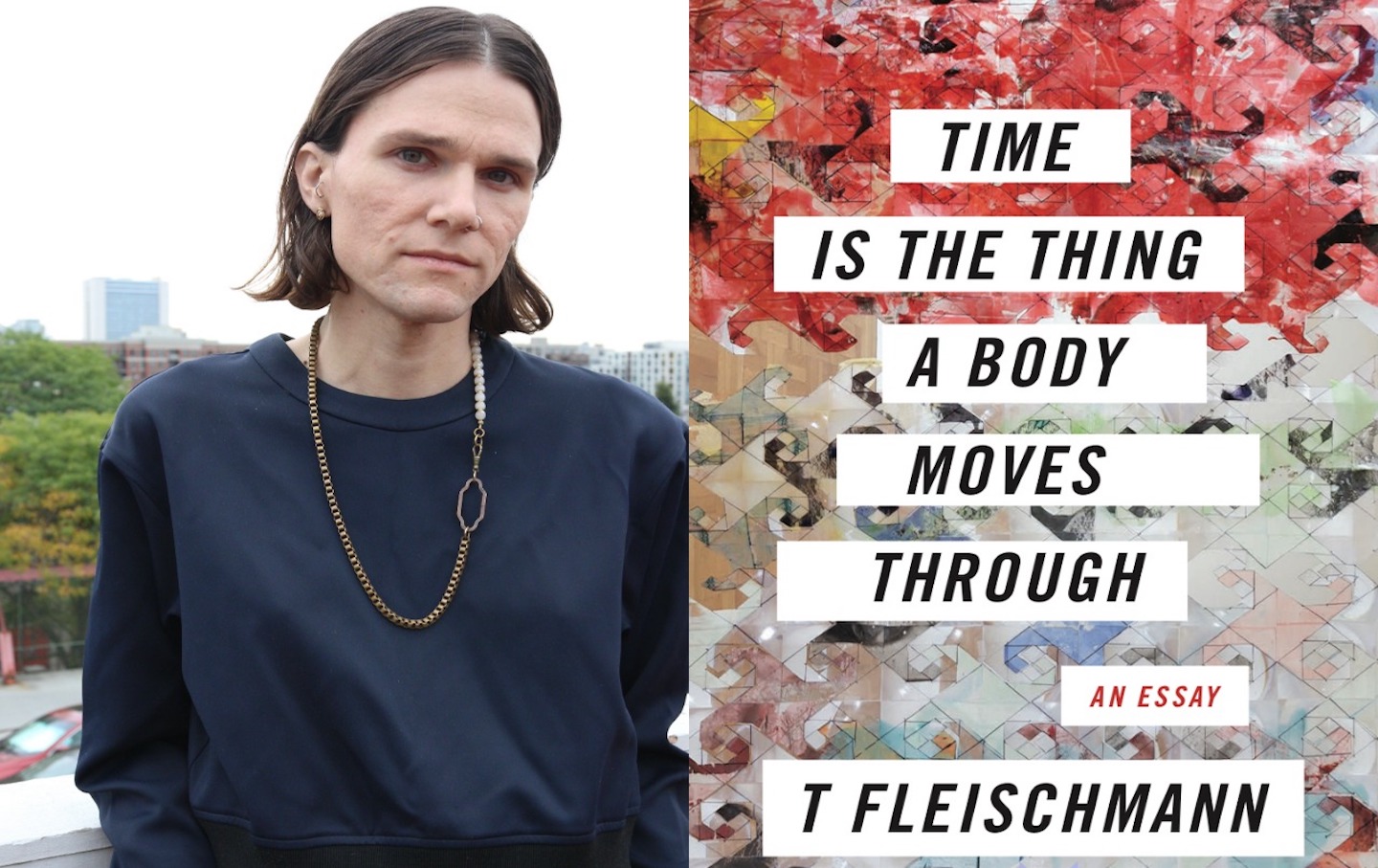 T Fleischmann. (Photo by May Allen)

Time Is the Thing a Body Moves Through begins on the road, or rather in a bus on the open road: T Fleischmann is leaving Buffalo, New York, where a friend/lover-in-flux (“a guy I love in my own weird way”) lives, and is traveling on to another city where another friend-cum-lover lives. This forms the basis for a map in the mind of the reader, one that will be referred to continuously throughout this book-length essay on friendship, creating communities, and the integration of activism, advocacy, and art.

Time Is the Thing a Body Moves Through

The book’s structure—alternating between a prose poem and an experimental essay, interspersed with art theory and social commentary—is its own journey, making stops in remote areas of the author’s mind and cruising past the ecstatic landscapes and monumental people in Fleischmann’s  memory. It returns to favored locales: collaborative projects with friend and photographer Benjy Russell, the work of the conceptual artist Felix González-Torres, and the modern history of queer sexual spaces in New York City.

In Time Is the Thing a Body Moves Through, Fleischmann (who uses they/them pronouns) records how their investment in and interaction with trans communities, anticapitalist pockets of artists and activists, sex workers, and practitioners of direct action (an activist philosophy centering on-the-ground protest) contribute to a personal community of socially and politically progressive individuals.

Fleischmann chronicles a nomadic lifestyle, regularly moving between rural cooperative farms in Appalachia and the Prospect Lefferts Gardens neighborhood of New York City, following friendships as often as academic fellowships and teaching positions. Their anecdotes throughout the work illustrate that their lifestyle, blending teaching and off-the-grid community, is not only a personal path but a framework for a life outside of capitalism.

Their prose records the work of people whose knowledge and labor is often erased by traditional structures of employment and empowerment, but it is also gives voice to things that we don’t often discuss when thinking about activism, such as love, joy, humor, and play.

Within this social context, Fleischmann concentrates on relationships that fall outside of traditional categories. What’s the sort of relationship you have with a person you e-mailed to express your admiration for their work, had sex with once, and then saw only in passing? What do you call a budding romance with someone who lives halfway across the world? As Fleischmann shows, maybe it doesn’t matter if the bond has no settled name: “to chart these romances would be to name constellations among stars that will not stay still.”

As Fleischmann confesses, “That I’m never really in a relationship in a recognizable way puts me at odds with identity,” thereby highlighting the spaces where the dominant nature of coupledom has dissolved to make way for a different social and sexual structure. They illustrate how this ethos is linked to their conception of political resistance: Creating a community that operates outside a hierarchy is essential to the project of building safety for marginalized groups. 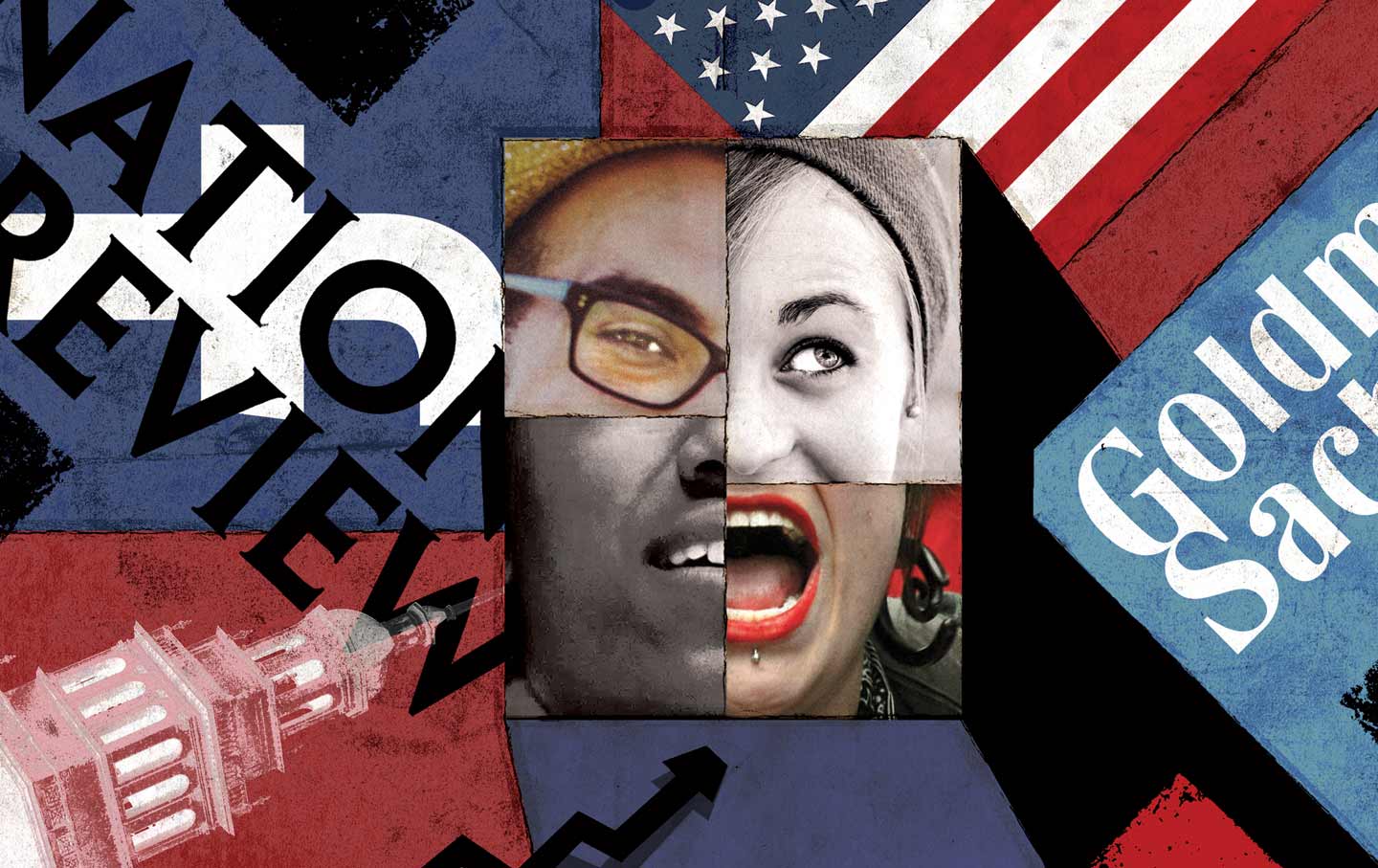 Early in the book, Fleischmann discusses how their interest in rural communities developed after a protest at the 2008 Republican National Convention: witnessing police brutality against the protesters made them want to invest in communities with less state interference. This, in turn, made them begin to question the ideals of queer assimilation: “As media representation and legal protections grew in the following years, so too did a queer cultural anxiety around political collapse, and a gnawing awareness that those protections were flimsy, insufficient at best.” Although Fleischmann doesn’t quite achieve bringing this thought process full circle—rarely discussing the limits of rural life or the logistical ways in which the state is unavoidable—the discussion works as an entry into explaining their parallel lives in cities and farms.

Much of the rest of the narrative involves Fleischmann wrestling with how to live out these ideals while also making a life and a living in academia and, eventually, getting married. As they travel from New York to Chicago and the rural enclaves in between, they illustrate how each of these settings both engender and inhibit progress for marginalized individuals. For example, Fleischmann shows how access to antiandrogens, estrogen-replacement drugs, and antiretroviral drugs for HIV treatment is much better in cities, while in rural areas where those drugs are not plentiful, it is much easier to cultivate self- and community sufficiency.

One person’s personal history is a point of access for others, and Fleischmann is smart not to make this book into a manifesto, rather entrusting that readers will find ways to make it applicable to their own forays into community building, resistance, and personal identity. Fleischmann offers the reader two access points: through memoir and through an examination of the work and life of the artist Felix Gonzales-Torres.

Writing about art in a way that is neither sterile nor effusive is a fine balance, but Fleischmann hits it exactly on the mark, engaging the participatory nature of González-Torres’s work and his friendships alike and intertwining them with Fleischmann’s own literary project: “I connect first to González-Torres at the point of aesthetics, a string of lights or a photo of a bed made exhilarating.”

González-Torres was primarily known for his installation pieces, and these are the works that Fleischmann is most entranced by. In the artist’s best-known work, Untitled (Portrait of Ross in L.A.), viewers are encouraged to take a piece from a pile of brightly colored candy. The pile begins at 175 pounds, the weight of González-Torres’s partner, Ross. The pile dwindles to represent Ross growing thinner as he grew sicker from HIV. The work is an invitation to participation as well as an emotional and social commentary. Fleischmann offers their readers a similar experience: essay as invitation, art criticism as immersion.

“The act of removing the piece of candy, with its overt ritualization, as an act that both grounded me and pushed me further into an imaginative space,” Flieschmann observes. “The tactility of unwrapping the paper and tasting the melting sugar situated me in my body, while the fact of Gonzalez-Torres’ romance with Ross revved me from my experience. I know, however, that I was only in my own memories.” Here, Fleischmann acknowledges the difficulty inherent in writing that blends the personal and the critical: When are we transposing ourselves onto a work that we love, and when are we analyzing it from a critical distance? But Fleischmann also makes a formal move—a stylistic argument for a middle ground, for art writing that blends the personal and the critical, a third space between art criticism and the personal essay.

Fleischmann draws a similar conclusion about Gonzalez-Torres’s art: “His work moves between fact and imagination, the object and the memory, to open a new space: from me, to something that exists beyond that limit.” Not only do Fleischmann’s and Gonzalez-Torres’s respective pieces both result in a third space; they also work in tandem in the text to create opposing images of the process of ekphrasis.

While Fleischmann excels at the integration of art and memoir, and while their obsession with Felix Gonzalez-Torres is riveting, other subjects the book covers—from an obsession with the Quaker preacher Jemima Wilkinson (aka the Publick Universal Friend) to a meandering prose poem—are less enthralling. Fleischmann makes up for these moments of diversion by grounding the reader in, among other things, their focus on how friendship creates community.

As any person whose life is fully intertwined with their friends knows, no circle of friends is complete without its own language of jokes. Usually, those jokes are totally impenetrable to outsiders, but Fleischmann manages to make legible and accessible jokes about an art project involving Squirt cans, imitating the imagined voices of “Mr. Moma” and “Mrs. The Guggenheim,” and countless other bits shared with their friends.

Though the book moves through space, friendship, and place, it always comes back to the individual, focusing on Fleischmann within the community and their conception of the self. Though Fleischmann writes of years where they wondered what identity they would ultimately claim on their journey, where we meet the author while reading, is the charting of a space away from the need for concrete definition rather than within it:

“It’s taken a lot of resistance, that I want to leave my gender and my sex life uninscribed—that it took me years to consider the fact that I did not have to name my gender or sexuality at all, so that now I must always tell people that I am not something. I insist on this absence more, even, than I used to insist on my identities.”

Fleischmann’s theory of identity suffuses the book on every level, a framework that shows that the ability to exist in an uninscribed space is an exercise in resilience and progress. It makes a sly blueprint for anticapitalism, too: The only maps to existing within the current social and economic structures are all within predetermined categories. But it’s the spaces in between that prove that another possibility and another future exist.