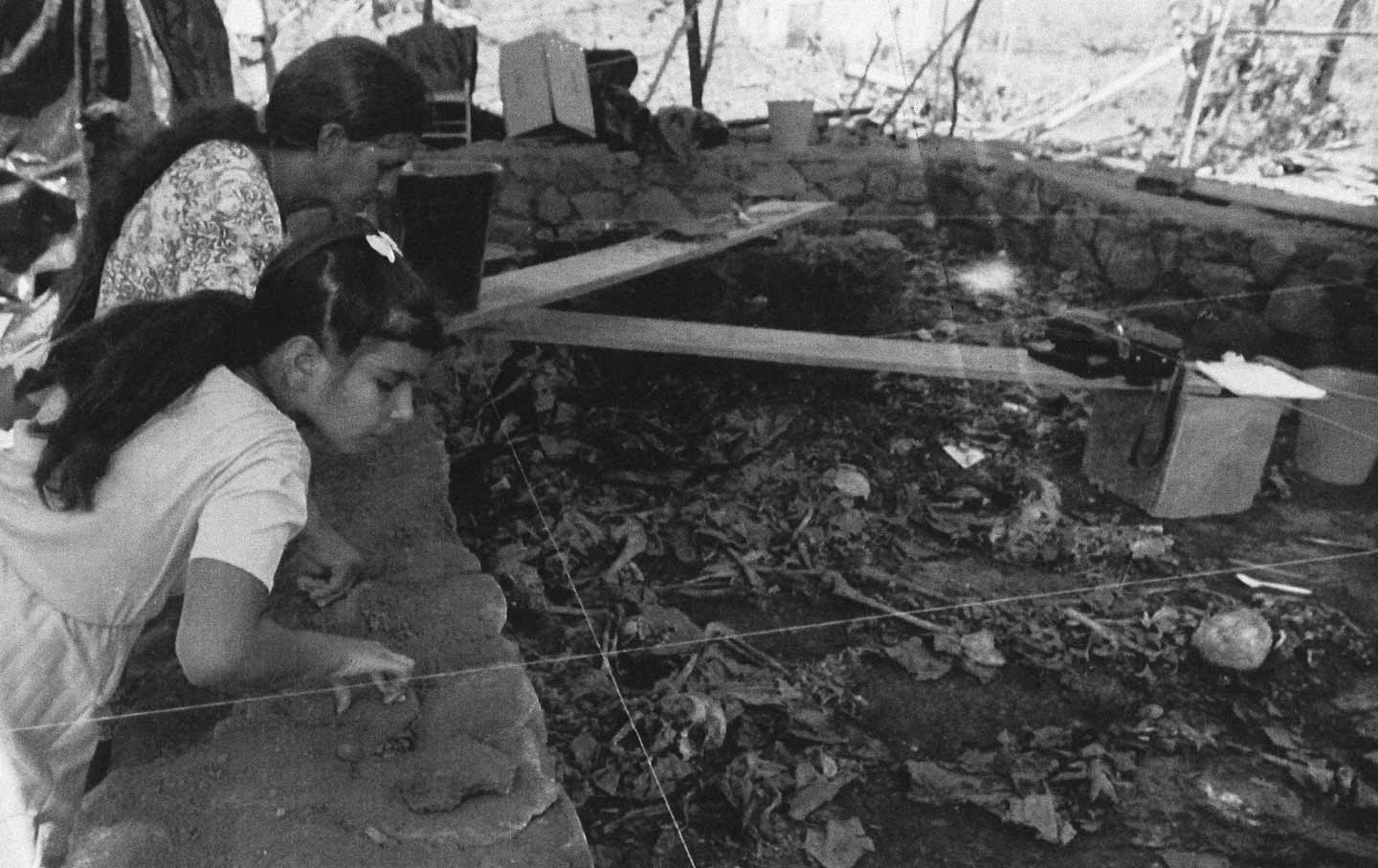 Women look over the excavation site where the remains of their friends and relatives are being exhumed by forensic anthropologists in El Mozote, El Salvador. (AP Photo / Luis Romero)

Over the ages, the United States has routinely intervened in Latin America, overthrowing left-wing governments and propping up right-wing dictators. President Obama pressed a reset button of sorts last month when he traveled to Cuba and Argentina. Now it’s time for him to visit a Latin America country that is geographically smallest but where Washington’s footprint is large and the stain of intervention perhaps greatest—El Salvador.

In Argentina, on the 40th anniversary of a military coup that ushered in that country’s “dirty war,” President Obama said it was time for the United States to reflect on its policies during those “dark days.” In the name of fighting communism, the Argentine government hunted down, tortured, and killed suspected leftists—sometimes throwing their bodies out of helicopters into the sea. “We’ve been slow to speak out for human rights and that was the case here,” Obama said.

That failure to speak out looks benign in contrast to the active role Washington played in the “dirty war” in El Salvador in the 1980s, which pitted a right-wing government against Marxist guerrillas. The United States sent military advisers to help the Salvadoran military fight its dirty war, as well as hundreds of millions of dollars in economic and military aid.

In Argentina, the security forces killed some 30,000 civilians. In El Salvador, more than 75,000 lost their lives during the civil war, which lasted from 1980 until the 1992 peace agreement. The guerrillas committed atrocities, but the United Nations Truth Commission, established as part of the accord, found that more than 85 percent of the killings, kidnappings, and torture had been the work of government forces, which included paramilitaries, death squads, and army units trained by the United States.

The Reagan administration often sought to cover up the brutality, to protect perpetrators of even the most heinous crimes.

The United States went well beyond remaining largely silent in the face of human-rights abuses in El Salvador. The State Department and White House often sought to cover up the brutality, to protect the perpetrators of even the most heinous crimes.

In March of 1980, the much beloved and respected Archbishop Oscar Arnulfo Romero was murdered. A voice for the poor and repressed, Romero, in his final Sunday sermon, had issued a plea to the country’s military junta that rings through the ages: “In the name of God, in the name of this suffering people whose cries rise to heaven more loudly each day, I implore you, I beg you, I order you in the name of God: stop the repression.” The next day, he was cut down by a single bullet while he was saying a private mass. (In 2015, Pope Francis declared that Romero died a martyr, the final step before sainthood.)

Eight months after the assassination, a military informant gave the US embassy in El Salvador evidence that it had been plotted by Roberto D’Aubuisson, a charismatic and notorious right-wing leader. D’Aubuisson had presided over a meeting in which soldiers drew lots for the right to kill the archbishop, the informant said. While any number of right-wing death squads might have wanted to kill Romero, only a few, like D’Aubuisson’s, were “fanatical and daring” enough to actually do it, the CIA concluded in a report for the White House.

Yet, D’Aubuisson continued to be welcomed at the US embassy in El Salvador, and when Elliott Abrams, the State Department’s point man on Central America during the Reagan administration, testified before Congress, he said he would not consider D’Aubuisson an extremist. “You would have to be engaged in murder,” Abrams said, before he would call him an extremist. But D’Aubuisson was engaged in murder, and Washington knew it. (He died of throat cancer in 1992, at the age of 48. Abrams was convicted in 1991 of misleading Congress about the shipment of arms to the anti-Sandinista forces in Nicaragua, the so-called “Iran/Contra” affair. He was pardoned by President George H.W. Bush, later served as special adviser to President George W. Bush on democracy and human rights, and is now a foreign-policy adviser to GOP presidential candidate Ted Cruz.)

The administration knew the Salvadoran military murdered four US churchwomen in 1980—but denied the evidence.

No act of barbarism is more emblematic of the deceit that marked Washington’s policy in El Salvador in the 1980s than the sexual assault and murder of four US churchwomen—three Roman Catholic nuns and a lay missionary—in December 1980, a month after Ronald Reagan was elected president.

The American ambassador, Robert White, who had been appointed by President Jimmy Carter, knew immediately that the Salvadoran military was responsible—even if he didn’t have the names of the perpetrators—but that was not what the incoming administration wanted to hear.

One of Reagan’s top foreign-policy advisers, Jeane Kirkpatrick, when asked if she thought the government had been involved, said, “The answer is unequivocal. No, I don’t think the government was responsible.” She then sought to besmirch the women. “The nuns were not just nuns,” she told The Tampa Tribune. “The nuns were also political activists,” with a leftist political coalition (Kirkpatrick died in 2006).

In Argentina, President Obama praised two American diplomats, Tex Harris and Patt Derian, for their commitment to documenting the human-rights abuses in Argentina.

Two American diplomats in El Salvador deserve similar presidential recognition. Ambassador White, a career diplomat, lost his job and was forced out of the foreign service by Secretary of State Alexander Haig when he refused to participate in a cover-up of the Salvadoran military’s involvement in the murder of the American churchwomen. Haig told a congressional committee that the women may have been trying to run a roadblock when they were killed (Haig died in 2010; White died in 2015).

At considerable risk to his career and his life, a junior diplomat in the US embassy, H. Carl Gettinger, wasn’t deterred by the chicanery in Washington and carried out his own investigation. It was Gettinger who had learned from the Salvadoran military informant about D’Aubuisson’s role in the assassination of Archbishop Romero, and he turned to the man, an army lieutenant, to help him solve the churchwomen’s case. The lieutenant, who had so much blood on his own hands during the dirty war that Gettinger dubbed him “Killer,” gave Gettinger, and the United States, the name of the sergeant who led the operation and that of four other soldiers who had participated, a crime that senior Salvadoran military commanders had successfully covered up until then (the men were convicted in 1984).

“Carl is an unsung hero,” Carol Doerflein, who was the assistant public affairs officer in the US embassy in El Salvador at the time, told me recently.

One year after the churchwomen were murdered, one of the worst massacres in modern Latin American history occurred when soldiers from the US-trained Atlacatl Battalion carried out an operation in the mountainous region of northeastern El Salvador. Altogether more than 700 men, women, and children were killed in El Mozote and surrounding villages.

In 1981, the military massacred over 700 civilians at El Mozote—and Reagan’s officials dismissed it as “propaganda.”

The Reagan administration steadfastly denied there had been a massacre by government troops. Reports of the massacre, by myself in The New York Times and Alma Guillermoprieto in The Washington Post, were dismissed by administration officials and their right-wing supporters as “guerrilla propaganda.”

But cables and documents declassified by the Clinton administration in the early 1990s—as well as the findings of the UN Truth Commission—have confirmed the massacre in grisly detail. “As many as several hundred men, women and children were allegedly massacred by the Atlacatl Battalion during the December 10-13, 1981, El Salvadoran Armed Forces (ESAF) offensive,” the State Department wrote in a secret eight-page report to the Truth Commission. The commission removed the “allegedly.” On the morning after arriving in the area, according to the commission, the soldiers had “proceeded to interrogate, torture and execute the men.… Around noon, they began taking out the women in groups, separating them from their children and machine-gunning them. Finally, they killed the children.”

In 2012, on the 20th anniversary of the civil war’s end, El Salvador’s president, Mauricio Funes, went to El Mozote to apologize. “For this massacre, for the abhorrent violations of human rights and the abuses perpetrated in the name of the Salvadoran state, I ask forgiveness of the families of the victims,” he said, wiping away tears. He laid flowers on the monument that had been erected.

In Argentina, Obama tossed white roses into the water at a memorial to the victims of that country’s dirty war. No US official, not even a mid-level one, has ever visited the monument at El Mozote or apologized or expressed regrets about that massacre or, more broadly, for Washington’s active role in funding and encouraging El Salvador’s dirty war.