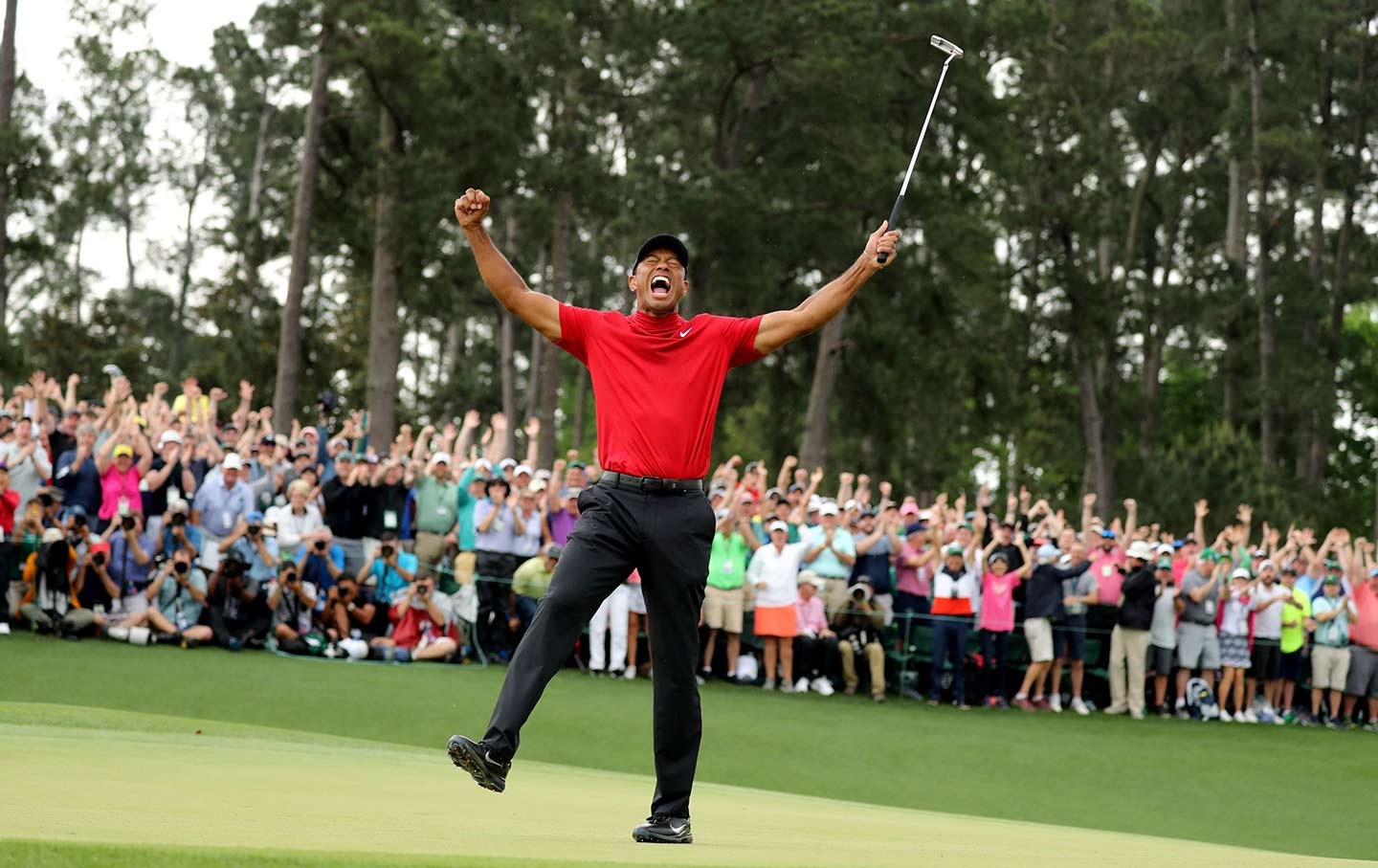 To be captivated by Tiger Woods’s comeback victory at the Masters is to be human. He hadn’t won a major in 11 years, and had not triumphed at the Masters—the most prestigious event on the PGA tour—since he was 29. At 43, coming off countless surgeries, a pill addiction, and affairs that imploded his marriage in front of the world, Tiger clawed his way back to the mountaintop. After clinching victory on the 18th hole, Tiger Woods fiercely embraced his young son, the same way his late father Earl Woods bear-hugged Tiger back in 1997 when he won at Augusta for the first time. Not even the idea that this fatherly embrace will almost certainly be used by Nike in a heartfelt ad or that father and son were wearing more swooshes than the entire Duke basketball team could detract from the moment.

There will always be something meaningful about having a golfer of color win at Augusta. The golf course, built on an antebellum plantation, did not have an African American compete until Lee Elder in 1975. The club itself didn’t admit black members until 1990. The symbolic power of Tiger raising his arms in victory at the most restricted of clubs in the most restricted of sports will always raise goosebumps.

But much has changed since the last time Tiger was victorious at Augusta. Back in 2005, it was still possible for Tiger Woods to play the role of the apolitical athlete: to be primarily a brand. Tiger, like one of his mentors, Michael Jordan, was a Picasso at the art of eliding anything of substance. In particular, after his ill-fated foray in branding his racial identity as “Cablinasian,” Tiger has marketed his status as a trailblazing black athlete, while also denying that it gave him any obligation to use his platform to say something about race or oppression. He not only wouldn’t be “Gandhi,” as his late father famously predicted when Tiger was barely old enough to drive; he would, in fact, resist any kind of social responsibility.

That could still work in 2005. But in 2019, in the “shut up and dribble” era of Donald Trump, it’s a tougher sell. The tweeter in chief has turned every day into a political litmus test, and no arena has been spared, especially not sports. To say you have no opinion in this climate is in effect to have an opinion. Or as Dr. King said, “A time comes when silence is betrayal.”

What’s more, Trump and Woods have been friends dating back to when Trump was just a reality-TV host and not whipping up white nationalists to threaten the life of a sitting member of Congress. When asked about their relationship, Tiger said, “Well, I’ve known Donald for a number of years. We’ve played golf together. We’ve had dinner together. I’ve known him pre-presidency and obviously during his presidency. He’s the president of the United States. You have to respect the office. No matter who is in the office, you may like, dislike personality or the politics, but we all must respect the office.” When asked to comment further after an Augusta tournament, he said, “No. I just finished 72 holes and am really hungry.”

Trump, unable to resist crudely placing himself in the middle of this feel-good Masters moment, tweeted that he would be honoring Woods with the Presidential Medal of Freedom.

It would be shocking if Woods turns down the offer. After all, “we must respect the office.” But we also know that many athletes have chosen to not respect an openly racist president who calls them “sons of bitches” and brays for them to lose their jobs for the crime of protesting racism. Leading among them is the only athlete whose fame rivals Tiger, LeBron James.

The last two years have seen NBA teams, individual baseball players, and football players, refuse trips to the White House and choose to be public about the fact that they will not be used as a prop by this administration. They will simply not “respect the office” of someone who time and again has chosen to disrespect not just “the office” but people of color, immigrants. women, the disabled… The list tragically is as long as the Twitter rants that stand as an ugly testament to his petty—and dangerous—hatreds.

Accepting any honor or medal or even photo op from this administration is anything but an apolitical act. That’s the reality of the times we live in. Tiger knows it, but he will almost certainly make the calculation that an open refusal of Trump will be a political step too far. He is going to find out that acceptance—that being a prop for this administration—will be read just as politically.