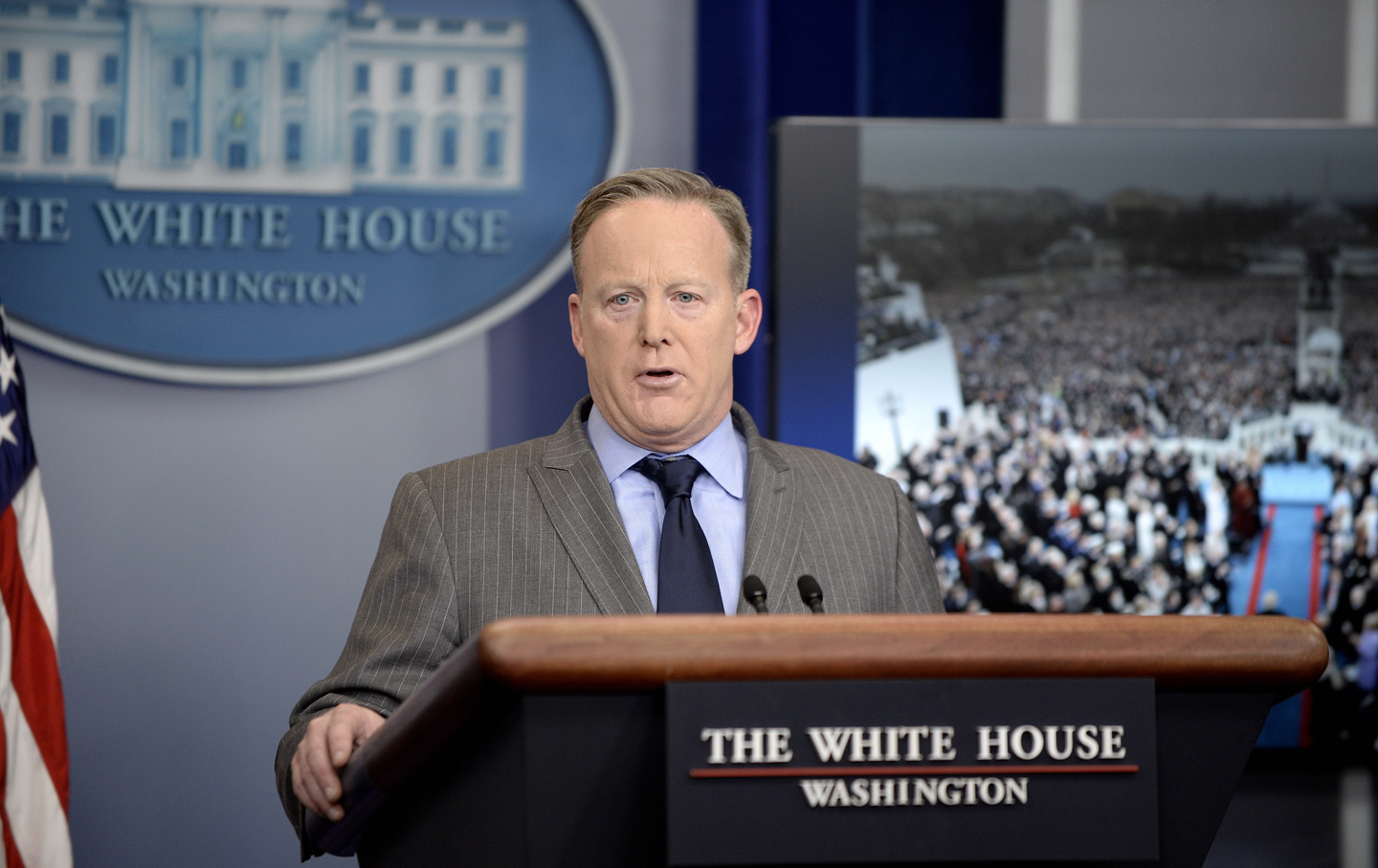 When George Orwell’s 1984 is studied in the future, reference will surely be made to White House Press Secretary Sean Spicer’s remarkable briefing at the close of the first full day of Donald Trump’s presidency.4

Trump had been sworn in a day earlier, as a commander in chief without a mandate—a candidate who lost 54 percent of the popular vote and trailed his chief opponent by close to 3 million votes. The pretender delivered an uninspired 16-minute inaugural address to an unimpressive crowd and then paraded through the streets of a capital city where 96 percent of the electorate had rejected him, and where evidence of enthusiasm for his inauguration gave new meaning to the term “modest.”5

On the following morning, in the same capital city, the streets were filled by a crowd of Americans—conservatively estimated at more than a half-million—who had come to challenge the new administration’s policies toward women in particular and humanity in general. These Americans marched and rallied as part of a national (and global) outpouring of opposition to this president that was so dramatic that The Guardian headlined its report: “Women’s March on Washington overshadows Trump’s first full day in office.”6

It was a nightmare scenario for the newly minted press secretary for a man whom the crowds of dissenters decried as a “minority president.” Spicer, at experienced hand at communications, could have approached the circumstance from any number of directions. Or he could simply have said nothing on a Saturday night when no one was expecting the partied-out Trump team to add anything to the narrative.7

But Trump and his aides fully recognize that the legitimacy of his presidency is in question. And they fully fear that even his supporters are beginning to question the wisdom of their 2016 choices. (While Trump won 46 percent of the vote on Election Day, the Real Clear Politics average placed his approval rating at just 41.8 percent on the eve of his inauguration—and some surveys put the number as low as 32 percent.)8

So Spicer spoke—delivering a diatribe that surely merited the application of the often-misapplied term “Orwellian.”9

Trump’s man declared that “Yesterday, at a time when our nation and the world was watching the peaceful transition of power and, as the President said, the transition and the balance of power from Washington to the citizens of the United States, some members of the media were engaged in deliberately false reporting.”10

In other words: Don’t believe news reports that call into question the carefully constructed narrative of the new administration.11

Spicer asserted, at length, that “photographs of the inaugural proceedings were intentionally framed in a way, in one particular tweet, to minimize the enormous support that had gathered on the National Mall. This was the first time in our nation’s history that floor coverings have been used to protect the grass on the Mall. That had the effect of highlighting any areas where people were not standing, while in years past the grass eliminated this visual. This was also the first time that fencing and magnetometers went as far back on the Mall, preventing hundreds of thousands of people from being able to access the Mall as quickly as they had in inaugurations past.”12

In other words: Don’t believe what you are seeing with your own eyes.13

“Inaccurate numbers involving crowd size were also tweeted,” Spicer continued. “No one had numbers, because the National Park Service, which controls the National Mall, does not put any out. By the way, this applies to any attempts to try to count the number of protesters today in the same fashion.”14

In other words: Don’t accept any numbers that are not provided by an “official” source, such as, say, the Trump White House.15

Then Spicer provided numbers that were deliberately chosen to produce a false impression of Trump’s inauguration and insisted: “This was the largest audience to ever witness an inauguration…” To pound in his point, Spicer added the this-ends-the-discussion assertion: “Period!”16

In short order, PolitiFact reviewed the statement and the data and headlined its report: “Donald Trump had biggest inaugural crowd ever? Metrics don’t show it.” After reviewing the multiple falsehoods uttered by the new White House press secretary, the nonpartisan fact-checking site concluded its report with the line: “We rate Spicer’s claim Pants on Fire.” As in: pants-on-fire lying.19

The following morning, an even-higher-ranking Trump apparatchik, presidential counselor Kellyanne Conway, was asked by NBC’s Meet the Press host Chuck Todd to explain “why the president asked the White House press secretary to come out in front of the podium for the first time and utter a falsehood.”20

Donald Trump’s peddlers of “alternative facts” are not mere partisans. George Orwell imagined a dystopian future in which authoritarians aspired to “reality control.” What was required of mandarins was an ability “to be conscious of complete truthfulness while telling carefully constructed lies.” Trump and the members of his administration are the authoritarians that Orwell warned about.