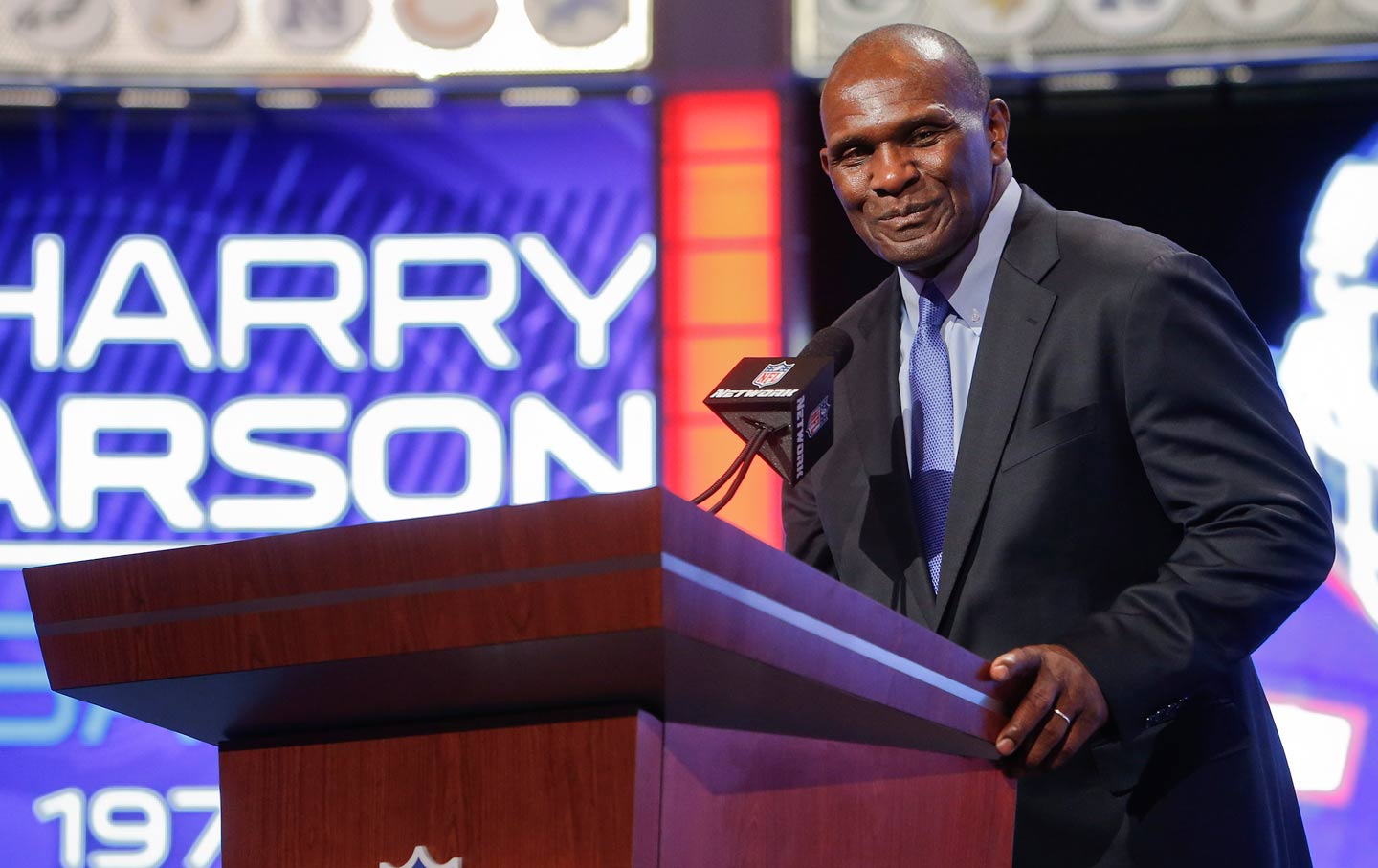 Growing up, there were few athletes more unassailable, in my eyes, than Harry Carson. The New York Giants middle linebacker was captain of one of the great defenses in league history and was lauded as the brains of a legendary linebacking corps that included Carl Banks, Gary Reasons, and the otherworldly Lawrence Taylor. L.T. might have been the unholy terror that the Giants would unleash on opposing quarterbacks, but Carson was his minder: the person who released the Kraken. He was trusted to put into practice the defensive schemes sent in by head coach Bill Parcells and his young defensive coordinator Bill Belichick: schemes that led to a dominant Super Bowl triumph in 1987.

After nine Pro Bowls and election into the Pro Football Hall of Fame, it would be easy for Harry Carson to just live out his days on the gravy circuit and tell NFL war stories to adoring corporate crowds. Instead, he’s on a mission to take the NFL to task, and spare others his private pain.

Carson was in Albany, New York, last week, supporting a bill put forward by Assemblyman Michael Benedetto from the Bronx calling for the statewide ban on tackle football for children 13 and younger. As reported by Nathaniel Vinton in the New York Daily News, Carson said to lawmakers, “I think that parents should think long and hard about what they’re signing their kids up for. There is definitely a correlation between head trauma and problems down the line, whether it’s in older adults with dementia or young people with post-concussion syndrome. It affects their quality of life.”

Carson also made clear that, in his family, he practices what he preaches, saying, “I’ve sort of made the decision, as the dictator of my family, that my grandson was not going to play football. He understands where I’m coming from. He’s not going to be playing football. I get him involved with other sports.”

The push to end youth tackle football has gained momentum in recent years, with advancements in medical research, the recognition of chronic traumatic encephalopathy (CTE) as a brain disease strongly linked to the sport, class action lawsuits by former players, and the film Concussion. Yet Carson is not new to raising these concerns. He has dealt with post concussive syndromes since he stepped away from the game—thinking initially that he had a brain tumor—and has consistently raised that this game is unsafe at any speed. All that’s new is the attention. As he said in Albany, “I’ve been in this thing for 25 years. This is not just new for me. I’ve lived it…. I am my own petri dish. I am my own specimen.”

Carson also attacked the idea that changing how tackling is taught, a key NFL propaganda point, makes a damn bit of difference, saying, “When you’re on the field, and bodies are moving, and you’re sort of zeroing in to make a hit, and that guy’s so fast that that shoulder’s not going to get there, you hit your head. You see stars and everything sort of fades to black and the damage is done.”

Harry Carson’s coming forward right now is particularly brave because very powerful people in the NFL—interestingly, all people who never actually played—are on a public-relations offensive against anyone who dares raise the idea that playing tackle football is uniquely unsafe. Jon Gruden, former coach and current voice of Monday Night Football said to Bleacher Report last week, “I’ve seen people get skin cancer going to the beach. Awareness is great. After a while, it becomes piling on. Everything is so slanted, it drives me crazy. It’s embarrassing. It’s sickening.” This echoes Commissioner Roger Goodell, who, when asked about the dangers of football earlier this year, said with a smirk, “There’s risk in sitting on the couch.”

Then we had Arizona Cardinals Coach Bruce Arians, who bellowed in March, “People that say, ‘I won’t let my son play [football]’ are fools. We have this fear of concussion that is real, but not all of those statistics, I think, can prove anything.” One wonders if he would call Harry Carson “a fool” to his face. Guessing there is about as much chance of that as Washington football team owner Dan Snyder going to Pine Ridge and calling people “R**skins.”

Lastly, there is Jerry Jones. The morally bankrupt Dallas Cowboys owner who, when asked about the relationship between chronic traumatic encephalopathy and football, said, “No, that’s absurd.”

Harry Carson has more credibility than the four of these sideline-warriors combined. The very traits for which he was lauded by NFL commentators as a player—leadership, courage, intelligence—have not dissipated with retirement. He is on no one’s payroll and far more importantly, lives with the pain that has made Gruden, Goodell, Arians, and especially Jerry Jones obscenely rich. People can decide for themselves whom they want to believe. To trust someone like Roger Goodell over Harry Carson would be, to use Jones’s language, “absurd.”