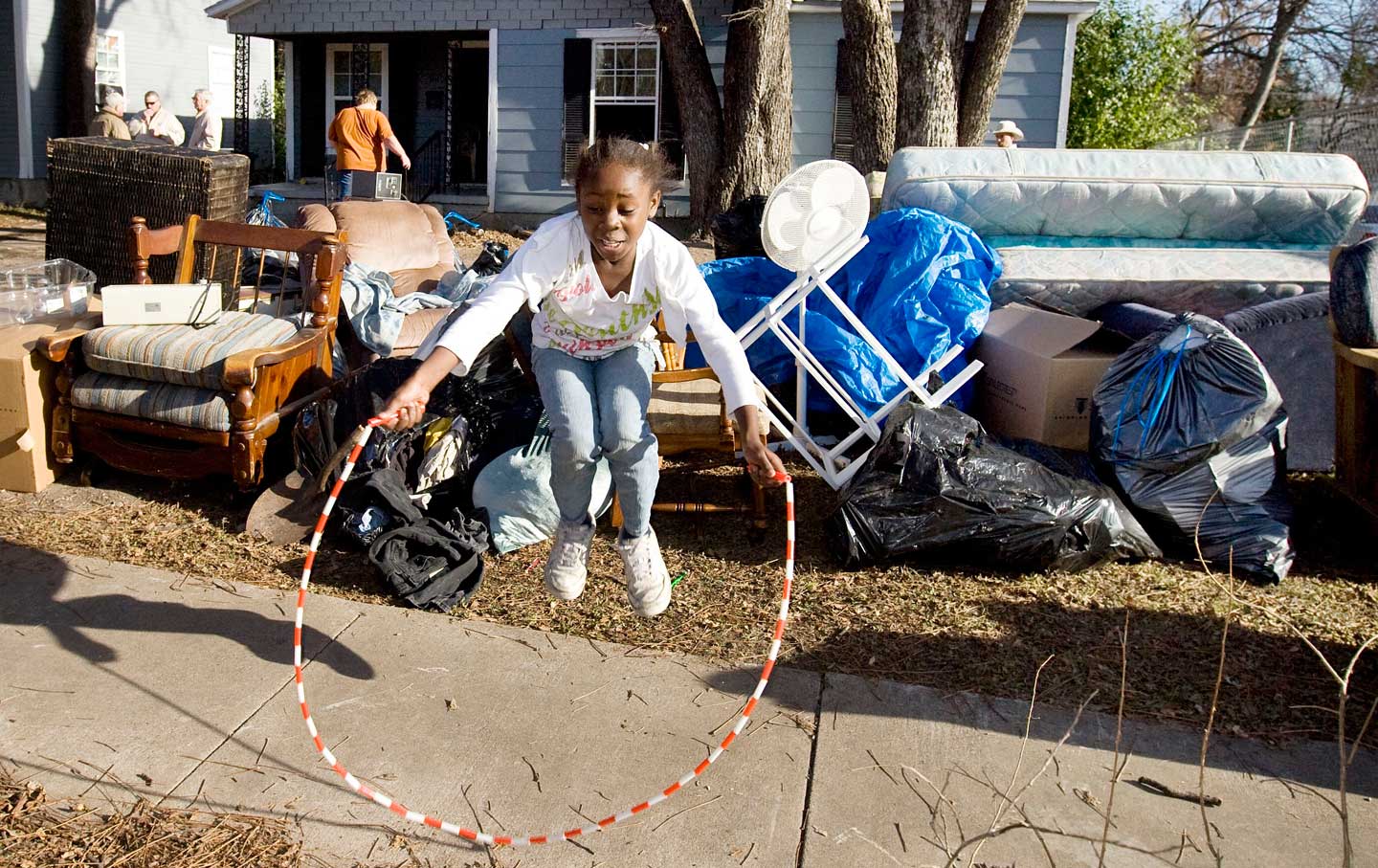 A young girl jumps rope on the sidewalk next to her family’s belongings after her family received a court order of eviction, Waco, Texas, 2008. (Reuters / Larry Downing)

In the spring of 2008, a graduate student named Matthew Desmond began renting out a trailer in a mobile-home park on the south side of Milwaukee. Like much of the south side, the park’s population was predominantly poor and white, with an outsize number of its residents addicted to drugs or working as prostitutes. After four months, Desmond moved to an equally impoverished, predominantly black neighborhood on the north side of Milwaukee, into a duplex bordering an alley covered in gang graffiti. Unlike most of his neighbors, Desmond didn’t live in these places because he had no better options. He was an ethnographer interested in studying the dynamics of eviction, a familiar ritual at his fieldwork sites, where movers arrived seemingly every day to dump the possessions of another evicted tenant on the curb. How often did this actually happen? No one knew. When Desmond searched for data on the eviction rate in Milwaukee, he couldn’t find much.

The dearth of information might have discouraged some researchers. Desmond took it as a sign that he was onto something. Countless studies have traced the way factors like jobs, wages, and mass incarceration fuel urban poverty, but the role of housing had been curiously overlooked. Since no good data existed, he decided to oversee a survey of his own. When Desmond crunched the numbers, the results were astonishing. As it turned out, eviction wasn’t a daily event in Milwaukee; it was more like an hourly one. In a city with less than 105,000 renter households, 16,000 adults and children were being evicted every year, amounting to one in eight renters between 2009 and 2011. The movers were especially ubiquitous in black neighborhoods, where female renters were nine times as likely to be forced out of their homes as women in poor white neighborhoods.

The calamitous effects of this mass displacement are not likely to be overlooked in the study of poverty much longer, thanks in no small part to Desmond himself. His new book, Evicted, published on March 1 by Crown, is already a national best seller, debuting at No. 6 on the New York Times nonfiction hardcover list. Full-page ads have appeared in The New Yorker, where the book was also excerpted. Evicted has received rapturous reviews in publications ranging from The Washington Post to Kirkus Reviews, which described it as a “21st-century How the Other Half Lives.” In a cover essay for The New York Times Book Review, Barbara Ehrenreich hailed it as “astonishing.” Another reviewer in the Times called it “unignorable,” predicting that Desmond’s revelations would make it impossible “to have a serious discussion about poverty without having a serious discussion about housing.”

just 15 percent of poor renters live in public housing; the rest must navigate the private market.

This is certainly conceivable, not least because Evicted debunks a series of misconceptions about where “the other half” typically ends up living these days. In public housing projects or rent-stabilized units, many middle-class Americans may think. In fact, just 15 percent of poor renters live in public housing; the rest must navigate the private market, where the demand for affordable housing is so great that the average rent in desolate slums is only marginally less than in middle-class neighborhoods, even for decrepit units with moldering walls and broken appliances. (Since the pool of renters is so vast, landlords have as little incentive to perform basic maintenance as they do to lower prices.) Evictions are an epidemic because “the majority of poor renting families in America spend over half of their income on housing,” Desmond notes. One in four spend more than 70 percent.

As one might expect in a work of sociology, Evicted has its share of statistics like this. But the book draws its force from something often underappreciated by the quantitative scholars who have come to dominate Desmond’s discipline: graceful writing and a vivid cast of characters, whose struggles are captured in unflinching detail. Among them is Arleen Beale, an African-American woman who falls behind on her rent after helping to pay for her sister’s funeral. (To protect their privacy, Desmond has changed the names of the tenants he profiles.) Two days before Christmas, Arleen is summoned to Housing Court, which on that morning, as on most days, is packed with black women, who are as overrepresented in eviction proceedings as their male counterparts are in prison. “Poor black men were locked up,” Desmond writes. “Poor black women were locked out.” One reason is that the factories where half of Milwaukee’s black residents once worked have also closed their doors. Since the age of 18, Arleen has mopped floors, waited tables, and endured more evictions than she can recount. “Do you have minor children at home?” a commissioner asks at her court appearance. “Yup,” she says, in a tone that betrays little hope of eliciting mercy. Her jaded attitude proves justified: By New Year’s Day, the court informs Arleen, she and her two sons must be out.

“Eviction is a cause, not just a condition, of poverty.” —Matthew Desmond

Evictions don’t just upend the lives of individuals, Desmond demonstrates; they destroy communities as well. The sociologist Robert Sampson has shown that social cohesion and shared norms can significantly lower the level of violence even in poor neighborhoods. Evictions have the opposite effect, destabilizing blocks, dislocating children from schools, and stretching families to the breaking point. For all of these reasons, Desmond argues, “Eviction is a cause, not just a condition, of poverty.” It is also, he shows, a lucrative business for landlords, who turn a handsome profit by overcharging—and, when need be, kicking out—poor tenants who have nowhere else to turn. Arleen’s landlord Sherrena, who initiated the process that led to her eviction, patronizingly tells her after the court hearing: “If you ever thinking about becoming a landlord, don’t. It’s a bad deal. Get the short end of the stick every time.” To Desmond, however, she confides something different. “The ’hood is good,” says Sherrena, who vacations in Jamaica and has a net worth of $2 million. “There’s a lot of money there.”

In an epilogue, Desmond argues that Americans must come to see the housing crisis as a product not just of low incomes but also of exploitation, a word that has been “scrubbed out of the poverty debate.” A 36-year-old Harvard professor who last year was awarded a MacArthur “genius” grant, Desmond is seemingly well positioned to change this. His book may also benefit from a political climate in which highlighting racial and economic exploitation is no longer so taboo. In the past few years, issues like inequality and mass incarceration have moved from the margins to the center of American politics, propelled by grassroots movements (Black Lives Matter, Occupy Wall Street) as well as by books like Michelle Alexander’s The New Jim Crow, to which Evicted has been compared.

Then again, in an election year that has thrown a spotlight on the declining fortunes of the working class, the epidemic of housing evictions, far from being “unignorable,” has scarcely been mentioned. The issue has received no sustained attention at either the 12 Republican debates, which is hardly surprising, or at the eight Democratic ones, which is telling. Although Hillary Clinton’s campaign website calls for a “$25 billion housing investment program” to lift “more families into sustainable homeownership,” Clinton has rarely pressed the issue on the campaign trail or spelled out the specifics. And for all the rousing speeches he’s delivered about economic injustice, Bernie Sanders has been equally silent, preferring to focus on inequality and the middle class rather than the truly disadvantaged.

The irony is that the scourge of eviction is a function of inequality. As Desmond notes, in 2008, the year Arleen was forced out of her home, tax benefits for middle-class and affluent homeowners exceeded $171 billion. This figure dwarfs the $22.5 billion that he estimates would be needed to give every poor renter in the country a housing voucher. Doing so would not only end homelessness, Desmond argues; it would enable poor people “to thrive and contribute.”

Not everyone is convinced of this. In an otherwise glowing review of Evicted in The New York Review of Books, Jason DeParle argued that the problems encumbering the poor are often more entrenched. Indeed, the stories Desmond tells bear this out. Some of the people he profiles have serious substance-abuse problems; others are victims of sexual abuse. Desmond chronicles some extraordinary acts of generosity—in one instance, an indigent woman and her friend empty their pockets to help a hungry boy purchase a meal at McDonald’s—but he also witnesses some seemingly puzzling behavior. A trailer-park resident named Larraine, for example, can’t afford to pay for hot water, but one day uses her food stamps to buy herself a lavish dinner of lobster tails and crab legs, which she eats in one sitting. Larraine’s pastor attributes this to a “poverty mentality.” But Desmond offers a different interpretation: In a society in which millions of poor people must devote a majority of their income to rent, “those at the bottom had little hope of climbing out even if they pinched every penny. So they chose not to. They would get a little high or have a drink or do a bit of gambling or acquire a television. They might buy lobster on food stamps.”

In other words, such choices are inextricably linked to the spirit-crushing circumstances that poor tenants face, providing a momentary respite from the sense of degradation and futility that is a constant feature of their lives. But as Desmond points out, it wasn’t always thus. Decades ago, evictions in America were fairly rare and, when they did occur, sparked resistance, even riots. It was only in the Reagan era that the demand for affordable housing began to overwhelm the supply—a problem exacerbated by the 2007 financial crisis, which caused the foreclosure rate to soar. It’s not impossible to imagine evictions becoming rare again, provided that the scale of the crisis comes to be seen as an indictment not of the poor but of the broader society. “Whatever our way out of this mess, one thing is certain,” Desmond writes in his haunting and essential book. “This degree of inequality, this withdrawal of opportunity, this cold denial of basic needs, this endorsement of pointless suffering—by no American value is this situation justified.” About this there can be no argument.